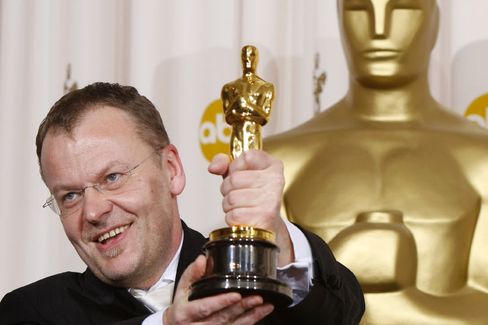 A Holocaust drama became the first Austrian movie to win an Oscar for best foreign language film on Sunday evening as "The Counterfeiters" beat out movies from Israel, Kazakhstan, Poland and Russia.

The film, a collaboration between Austrian and German producers, tells the story of a Jewish "habitual criminal" imprisoned in the Sachsenhausen Concentration Camp outside of Berlin. The prisoner, Salomon Sorowitsch (played by Karl Markovics), wins the favor of his German captors by using his talent as a counterfeiter to help produce mountains of fake dollars and pounds. Sorowitsch's labor is part of Operation Bernhard, a real-life Nazi scheme to destabilize economies in Britain and the United States by flooding their markets with counterfeit currency.

In Austria, the film became a source of national pride after receiving its Oscar nomination. The Vienna-based dailyKurier wrote that the movie "warmed the patriotic heart," and Ruzowitzky described its reception in Austria as a "national sensation."

"Being nominated, it was really for the whole country an exciting thing," he said backstage after accepting his Oscar at the annual awards ceremony on Sunday in Los Angeles. He added that he hoped the euphoric national pride created by "The Counterfeiters" would push government officials to take Austria's film industry more seriously. "I hope very much that this award will help Austrian filmmakers to make film in Austria stronger, have some more pressure on the politicians to support the film industry."

'It's not Enough To Be Proud'

In the wake of his Oscar victory, Austria's culture minister, Claudia Schmied, extended an "invitation to discuss the future of Austrian films" to Ruzowitzky. "It's not enough to be proud," she said in a statement. "After the celebration, it is essential to find a balance that will support European films. Across Europe, we need to foster the works and projects, the artistic potential, of our filmmakers."

During his acceptance speech on Sunday, Ruzowitzky named as his inspiration great Austrian directors -- Billy Wilder, Fred Zinnemann, Otto Preminger -- who became respected in the US after fleeing the rise of the Nazis in Austria.

"There have been some great Austrian filmmakers working here. (They) had to leave my country because of the Nazis, so it sort of makes sense that the first Austrian movie to win an Oscar is about the Nazis' crimes, he said.

Ruzowitzky, who spent most of his childhood in Düsseldorf, Germany, said that he was inspired to explore the Holocaust because it defined national identity in both his homelands and colored his family's history -- his grandparents, he explained, were Nazi sympathizers.

"Being an Austrian and having been raised in Germany, the Third Reich and the Nazis ... this is part of your history, the country's history and also my family's history and so I always felt I should make a statement on this period of time," he said.

But the Oscar, in some ways, is also one for Germany. The plot is German and the film is an Austrian-German co-production. "Fifty-fifty," Ruzowitzky said on Sunday, Oscar in arm.

Indeed, Ruzowitzky's film actually had its origins in Germany. Hamburg-based producers Nina Bohlmann and Babette Schröder initially approached the Austrian director about co-producing a film based on a story they had discovered after stumbling across the memoirs of concentration camp survivor Adolf Burger. They showed the book to Ruzowitzky, who brought the Vienna-based Aichinger Filmproduktion on board as co-producer, and the book would later become the basis for the film.