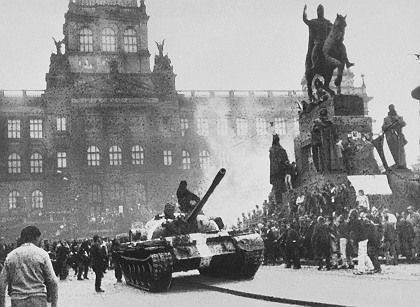 The uprising known as the "Prague Spring" was crushed by the Soviets in August 1968.

No one now remembers exactly which office the new employee from Prague moved into, that summer day in 1970. He is said to have been very nice, tall and with a friendly smile, and he took up quarters in the second story of a gray administrative building on the outskirts of Bratislava. The communist government had sent him there to oversee forestry equipment maintenance in the Slovak capital.

The nice new employee was a man named Alexander Dubcek, and one year previous he had still been first secretary of the Communist Party of Czechoslovakia. Party leaders had stripped him of power in April 1969, and later demoted him to a forestry job. Now Dubcek rode the tram to work; sometimes he would generously offer his seat to the secret service men who followed him conspicuously.

Alexander Dubcek was the hero of the so-called Prague Spring, the 1968 uprising crushed by the Soviets almost exactly four decades ago. Dubcek was a reformer who wanted to give communism a human face -- and he became a Czechoslovak icon as well as the hope of reformers in other socialist and communist countries. But Czechoslovakias experiment became its tragedy on the night of August 21, 1968, when the armies of fellow Warsaw Pact countries invaded. Students in Prague graffitied on a building wall, Lenin, wake up, theyve gone mad. Images of desperate people standing up defenseless against the tanks drew worldwide attention and widespread sympathy for the rebellion of little Czechoslovakia against the huge Soviet Union.

A New Kind of Democracy

The Prague Spring was the last attempt of communist reformers in the Eastern Bloc to rid their countries of the vestiges of Stalinism and to decentralize the totalitarian system. It was an historical breaking point with a depressing fallout. And it was then, in the summer of 1968, 12 years after the Hungarian Revolution and seven years after a wall first divided Germany in two, that a powerful illusion died out -- the illusion that the communist system could gradually develop into a new kind of liberal democracy.

The contrast between East and West has hardly ever been as great as it was then. As tanks rolled into Prague and members of the reform movement were arrested, students in Western Europe were taking to the streets to leverage far-reaching changes in government and society. In Germany, for example, protesters soon found a friend in Chancellor Willy Brandt, who wanted more democracy and embarked on a program of easing relations with the East.

Since then, references to the '68 Generation have had two very different meanings. For those who grew up in the East, including Germanys Chancellor Angela Merkel, 1968 means Prague, Dubcek, the tanks and the end of an illusion. For those born in the West, the same year conjures up student leader Rudi Dutschke, demonstrations and the student protest movement, as well as the terror of the extreme-left Red Army Faction. For those who lived in the East, 68 was a historical failure, while for those in the West the 68 movement, taken as a whole, was a story of success.

In Czechoslovakia the experiments failure had dramatic long-term consequences. Local party officials, with backing from Moscow, forced the instigators of the movement from their leadership positions one by one. In the end, even the popular Dubcek was sent off to Bratislava to inspect chainsaws.

With his prominent nose and friendly gaze, Pavol Dubcek resembles his father. When the Soviets invaded in 1968, the younger Dubcek was studying medicine in Bratislava. He sat on the sofa in his grandmothers house and heard the windows rattling as the tanks thundered by. At the time, he figured the whole family would be deported to Siberia. And besides that, he says today, we were certain they would execute Father. That, after all, is what was done with reformer Imre Nagy after the 1956 Hungarian Revolution.

But Alexander Dubcek survived the invasion by his Socialist comrades. He and other reformers were pushed to the fringes of society in the so-called normalization, a euphemism for the removal of unwanted individuals from office. Tens of thousands of Czechs and Slovaks were assigned to emptying garbage cans or sweeping streets.

Among them was the author Ivan Klíma, who had welcomed the Prague Spring and thus was now no longer allowed to publish. In 1988, shortly before political change came to the country, Klíma wrote a book called Love and Garbage about his years as a garbage man. Fellow author Milan Kundera left Czechoslovakia and gained world renown for novels such as The Unbearable Lightness of Being.

Cestmír Císar is one of the last men still living to have worked with Dubcek. He lives on the sixth floor of a Soviet-era concrete high-rise in Dablice, a residential development in Prague and the apartment is crammed from floor to ceiling with books. Císar has just published an autobiography, 1,300 pages long, in which he waxes lyrical about the past. We stepped up to bring old Czechoslovak humanitarian traditions back to life, he says. Young people dont know anything about it anymore.

Císar joined the Communist Party in 1945, when he was 25. Unlike in other Eastern European countries, the Communists were popular in highly industrialized Czechoslovakia after World War II.

At that time, after the trauma of the 1938 invasion by Nazi Germany and subsequent division of Czechoslovakia, it seemed only reasonable to many Czechs and Slovaks to form a close alliance with the Soviet Union. After all, it was the Western powers who had given Hitler carte blanche in their signing of the Munich Agreement, leading to the Nazi annexation of a part of the country known as the Sudetenland.

During the Prague Spring, Císar was a member of the Central Committee of the Communist Party, responsible for education, culture and science. It was he who abolished censorship -- a move which made him one of the countrys most beloved politicians. We wanted to overcome fear and create an open atmosphere, he says today. We just put into practice what the people were thinking. When the tanks rolled in, Císar too had to leave his government position and later eked out a living as a street sweeper. 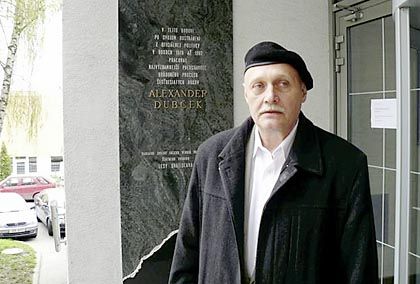 Alexander Dubcek's son Pavol says the way his father died is "rather strange."

After the Prague Spring was crushed, Czechoslovakia fell silent. The mental and moral devastation through the normalization process was the worst, even worse than the invasion itself, says Vojtech Mencl, charged with analyzing events between 1967 and 1970 by the new post-1989 democratic government. Moral cowardice became a prerequisite for private life, politics was seen as dirty and dangerous.

The result, he says, was that things stayed mostly calm in Prague, unlike in Budapest or Warsaw, all the way until November 1989. Czechoslovakias Velvet Revolution didnt start until after the Berlin Wall was already open.

After 1989, the communist regimes gradually collapsed. Of Czechoslovakias 1968 reformers, only Dubcek briefly played a small political role again -- but the ideals of the Prague Spring were left behind. The new leaders in Prague saw the socialists of 68, now grown old, as dreamers who had sacrificed their lives to a doomed experiment. Scholar Eduard Goldstücker, a member of the 68 generation from Slovakia, noted with disappointment that the Prague Spring was buried twice: once after August 21, 1968, and once again after the autumn of 1989.

Czechs and Slovaks, in short, were tired of experiments. They wanted the freedom -- and especially the prosperity -- of the West as fast as possible. It was liberals like Václav Klaus, current president of the Czech Republic, who led the country in a new direction. Klaus didnt believe in a moderate third way, in a synthesis of communism and capitalism as Dubcek had envisioned. All third ways lead to the third world, Klaus once said.

Dubcek, icon of the Prague Spring, achieved brief prominence one last time. In the heady days of November 1989 he stood beside Václav Havel, the newly elected president, on a balcony overlooking Pragues Wenceslas Square, to the cheering of vast crowds. The 68-year-old Dubcek then became speaker of the Federal Assembly, a symbolic post without policy-making power. The new hero of the times was Havel, an author and playwright who hadnt become a political figure until after 1968. In 1977 Havel co-authored the Charter 77, a manifesto against human rights abuses under the communist government in Czechoslovakia.

On September 1, 1992, Alexander Dubcek was a passenger in a car traveling from Prague to Bratislava. About 90 kilometers into the journey, near the town of Humpolec, the BMW ran off the road. It was a straight stretch of road and the weather was good -- rather strange, his son Pavol says.

The Prague Springs tragic hero was badly injured in the accident, and died two months later. Alexander Dubcek, still a popular figure in his country, is buried in Bratislavas main cemetery.