Sham Mohammed has just spent his fourth consecutive night between two olive trees in a recess of stone and grass near the Moria deportation camp on the island of Lesbos in another attempt to defy the will of the European Union. He wears a fleece pullover and the yellow safety vest of a volunteer. At night, he wraps his feet with a scarf. If it gets too cold, he does jumping jacks to get his blood circulating again.

Mohammed is a diminutive 21-year-old art student from Pakistan. He believes there's only one way left to prevent getting deported. "I have to hide from the police," he says. "Because they might also deport me without even reviewing an asylum application." Dozens of people like Mohammed are currently hiding in the groves around Moria.

When the Greek authorities announced last week that they were unable to carry out additional mass deportations because some migrants had suddenly disappeared, they were referring to people like Mohammed. Just as quickly as the deportations had begun, they came to a halt.

In the dawn hours on Monday, the EU began implementing the refugee deal it recently reached with Turkey. At least that's the way things looked. That day, 202 migrants were deported from Lesbos and Chios to Dikili in Turkey. The action was intended to show that the major exchange of refugees had begun. The same day, Syrian refugees arrived in Germany legally on flights from Turkey. By the middle of the week, no more refugees were arriving on the Greek islands. The message appeared to be getting across. So was the deal working? The short answer is: No.

"Perhaps we should wait and see a bit longer," Dimitris Vitsas, the deputy Greek defense minister responsible for addressing the refugee crisis, says. He says the weather may have played a part and that he doesn't want to draw premature conclusions. "But the numbers do show that something is working."

But what? Is it the deal with Turkey or the PR machinery that has accompanied it? The deportations that took place on Monday aren't very telling in terms of whether the mechanism will ultimately work or not. The EU had set April 4 as the day of implementation because it wanted to finally show that it could produce results. The overly hasty operation had one aim: that of sending a strong message.

What went unnoticed by most, though, is that the people sent back to Turkey from Lesbos and Chios on Monday were exclusively migrants who had wanted to continue their journey to Northern Europe and had not submitted applications for asylum in Greece. But Greece had already had the ability to deport these "illegal" migrants to Turkey since 2002 within the scope of a so-called readmission agreement that both countries had agreed to. So the new deal hadn't even been necessary for the deportations to happen.

"Monday was an expensive, but meaningless show," says Angeliki Dimitriadi, a visiting researcher at the European Council on Foreign Relations in Berlin. "Now the truly delicate work begins."

Of the more than 3,000 migrants who are still on Lesbos, almost all have since submitted asylum applications. They hope that doing so will enable them to prevent being deported. The refugees are assuming that it will take weeks or months to process their applications. With the submission of the applications, the Greek government no longer has the right to automatically deport them; the country is legally obligated to review every application. Refugees who have applied can only be deported once asylum status has been rejected. The worry now is that thousands of people may be stuck on the island for months to come without any certainty.

Things will get more difficult when Greece soon begins rejecting Syrian refugees as planned and sending them back to Turkey. At that point, a complicated legal dispute is expected to ensue. First, it remains questionable whether Greece will be capable of carrying out the asylum procedures within only a matter of days as planned. The country lacks both money and the necessary personnel. The Greek asylum agency currently has only 295 employees at its disposal across the entire country. It often takes months if not years before decisions are made.

The European Commission has announced it will send 2,300 experts to provide support, including police, asylum case officers, judges and interpreters. But few believe that Europe will succeed in changing the Greek asylum system overnight. So far, the EU hasn't even succeeded in sending enough officials. More than anything, the EU-Turkey deal represents a massive logistical challenge.

The situation was so chaotic the night before the first deportations took place that a senior official at one of the responsible EU agencies had to spend the night in a car because all the hotel rooms had been booked up. There were no lack of reports about the problems, either. Britain's The Guardian reported on Tuesday that 13 Afghan and Congolese refugees had been deported after police "forgot" to process their asylum claims, according to the director of UNHCR's Europe bureau. Athens has denied the charge.

Sitting in the lobby of a hotel in Athens is Heiko Werner, 44, team leader for Germany's Federal Office for Migration and Refugees, a man who has little patience for the accusations of chaos. Werner has spent the past decade working in crisis regions, and he has seen a thing or two in his life: refugee camps in Sudan, malnourished children. He's a man capable of assessing a mission, and one who knows how quickly rumors can travel in refugee camps. But he also knows how to transform a blueprint into a concrete asylum system. "I am confident that things will work in Greece," he says. Werner is also fond of peppering his explanations with terms straight out of the consultancy firm cookbook. He says Monday's operation, at least in principle, were symbolic, aimed at testing the new system.

He speaks of a "soft start." The next step, he says, is to fill a new structure with the necessary staff and to determine whether it is working and to then "go live" with it. The workers who participate in the test would remain and would be complemented by additional trained personnel.

"We have many people who must be processed," says Werner. "Our teams have to be able to achieve a high level of productivity very quickly." He says the pilot process should then be populated with more employees who would be working in the service of the Greek officials. He says he's certain the deal will work.

"For us, the burning question is what will happen when word gets around about the repatriations in the camps in Turkey," says Werner. He compares it with the decision to declare Albania and Kosovo to be safe countries of origin. Once that happened, the number of asylum-seekers from those countries dropped dramatically.

Is Turkey Really a Safe Country of Origin?

But even if the EU does succeed in getting the upper hand on the logistical aspects, the deal could soon face legal challenges. In order to reduce refugee numbers on the long term, sending only Pakistanis and Moroccans back to Turkey won't be enough. The authorities would also have to begin deporting significant numbers of Syrians, who had a nearly 100 percent rate of being granted asylum protection in Europe last year.

The deal is an indication that the EU views Turkey as a safe country of origin. That means that applications of refugees who travel to Greece via Turkey may be rejected. But it is questionable whether this line of argumentation will stand in court. Experts argue that Turkey fails to meet a series of minimum standards required by European asylum law. When it signed the Geneva Convention on Refugees, Ankara retained a geographic limitation stipulating that only those fleeing as a consequence of "events occurring in Europe" must be given refugee status. The government has created exceptions for Syrians, but all others are forced to get by without any state aid.

"The deal will not be allowed to stand by the European Court of Justice," predicts Luise Amtsberg, the refugee policy spokesperson for the Green Party group in the Bundestag, Germany's federal parliament. She visited Lesbos this week. Even members of the Greek government view the deal skeptically. "If we find that the criteria we have set for Turkey for securing refugee rights are not being fulfilled, then we won't be able to send any more people back," Greek Interior Minister Panagiotis Kouroumblis told SPIEGEL.

Human rights organizations like Germany's Pro Asyl have already announced their intention to provide support to refugees seeking to sue in European courts. If judges were to then suspend deportations, the deterrent effect would immediately fall flat and the deal would be over.

Sham Mohammed, the Pakistani, explains that his family back in Pakistan is being persecuted by a criminal gang. He says they have shot his father in the leg and injured his uncle. He, too, believes he is in danger. He claims that while making his journey to Lesbos, he was kidnapped and tortured in Iran. He even shows what he says are traces of that torture on his elbow.

In order to review Mohammed's asylum application, he would have to be posed a multitude of detailed questions. "An asylum official with a medium level of experience could spend an entire day with an interview like that," says American attorney Kavita Kapur, 30, who has worked in the past for government agencies as well as for the UN Refugee Agency (UNFCR). Kapur is here out of concern for the refugees' rights.

She is one of the few independent monitors who is allowed to move freely inside Camp Moria. She also speaks Urdu, the lingua franca of Pakistan. She says that the police officers who are the only ones authorized to take the migrants to the asylum registration centers cannot even understand the men. She claims that other migrants stood outside the office for days and never managed to make it inside during opening hours.

"I think the government is doing its best, but Greece has always had a very weak asylum system," Kapur says. "Before an orderly system has been set up, no one should be deported." 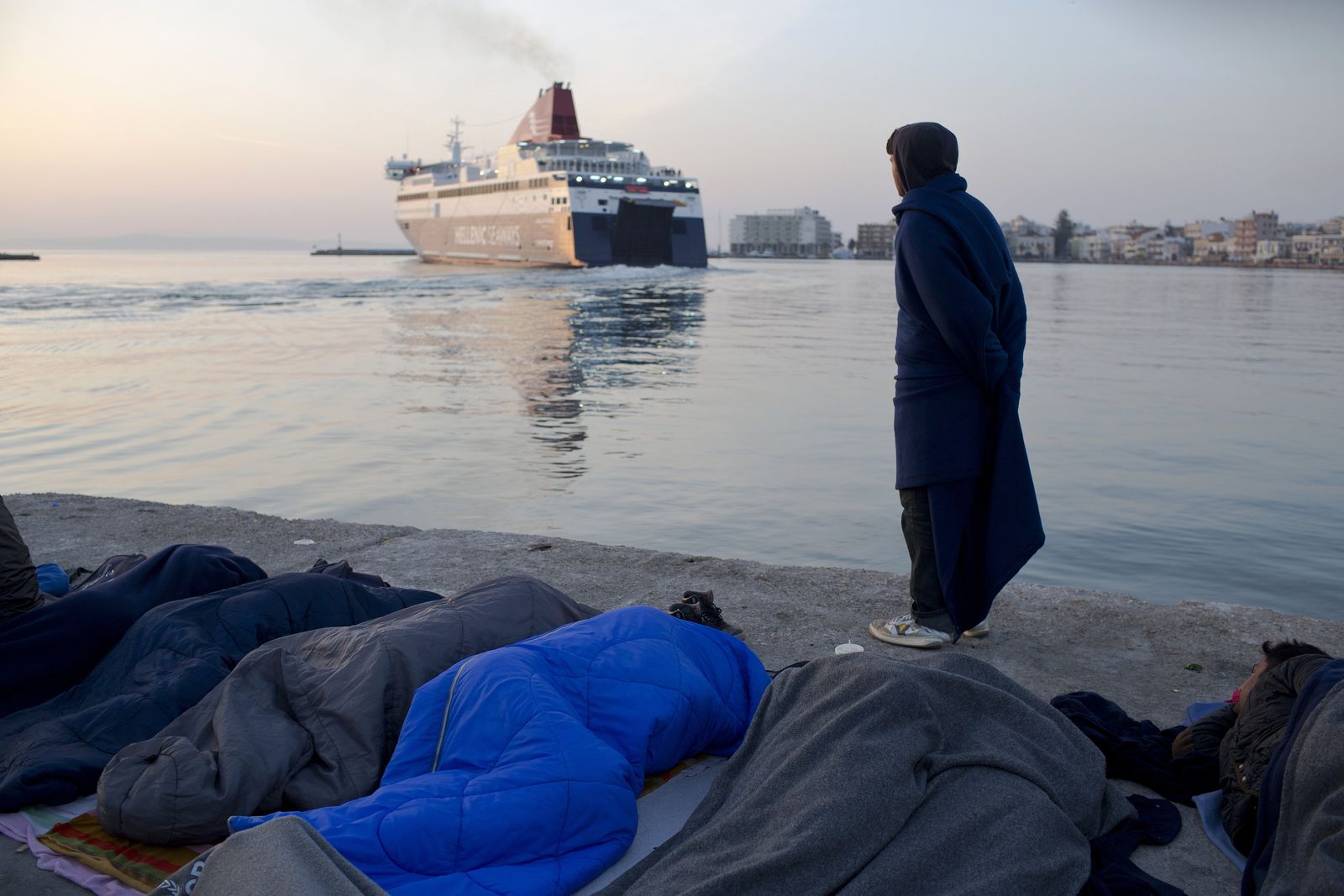 Refugees sleep on Chios as a man watches a ferry leave the Greek island. On Monday, 202 migrants from 11 countries were sent back to Turkey from the Greek islands of Lesbos and Chios.