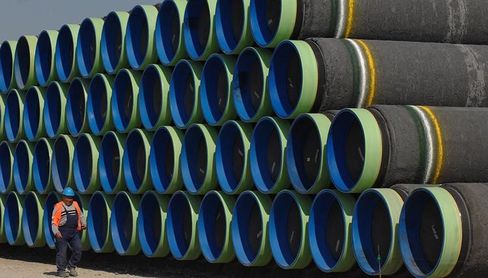 Former top German politicians have developed a thing for pipelines.

First, it was his boss, ex-Chancellor Gerhard Schröder, who followed the path from politics into the natural gas business. Now, reports indicate that former German Foreign Minister Joschka Fischer has signed a lucrative consulting contract with the Nabucco Pipeline, a European Union backed project designed to ease the EU's dependence on Russian natural gas.

According to information obtained by SPIEGEL sister publication Manager Magazin, Fischer has joined the €7.9 billion ($11.1 billion) project as a political advisor, primarily to ensure that Turkey remains on board -- but also to manage relations with other countries affected by the pipeline, including transit countries Bulgaria, Romania and Hungary.

The planned 3,300-kilometer (2,050 mile) long pipeline would also flow through Turkey on its way from the Caspian Sea region to southeastern Europe. But whereas southeastern European Union countries have been solid in their backing for the project, Ankara has often succumbed to the temptation to link ongoing European Union accession talks with its support for the pipeline. Just in January, Turkey threatened to withdraw its agreement if Brussels didn't open new chapters in the ongoing accession negotiations.

On Tuesday, the Turkish minister for EU affairs, Egemen Bagis, said that his country is interested in signing a final Nabucco agreement by the middle of July.

Still, there are plenty of political challenges for Fischer, the former leader of Germany's Green Party, in his new job. One of the primary reasons for the Nabucco project is to reduce European Union reliance on natural gas from Russia. That, though, is something Moscow would like to prevent. Just in May, the Russian state natural gas company Gazprom signed a deal with several southeastern European countries for a rival pipeline, called South Stream, which would deliver natural gas to Europe from Central Asia.

Ironically, Fischer's new position puts him across the fence from Schröder, his former political partner from 1998-2005, when a coalition government of Schröder Social Democrats and Fischer's Greens called the shots in Berlin. Just weeks after losing his chancellor job to Angela Merkel in the 2005 elections, Schröder took a position as chairman of the board of a Gazprom consortium currently building a natural gas pipeline beneath the Baltic Sea from Russia to the northern German coast. Called Nord Stream, the 1,220 kilometer long pipeline is scheduled for completion in 2012 and is estimated to cost some €7.4 billion.