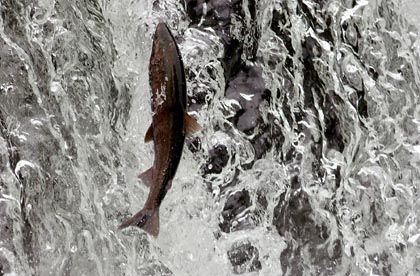 Salmon are good at jumping up small water falls. They have trouble with larger dams.

Twenty years ago, environmental politicians dreamed a bold dream. Salmon, once prized by fishermen as the king of fish but at that point extinct from the Rhine, should once again be able to travel the entire length of the river, all the way to their spawning grounds in the babbling brooks of the Black Forest, the Vosges Mountains and the Swiss Alps.

Now the dream has -- almost -- become a reality. Its been two decades since the Lachs 2000 ("Salmon 2000") program was implemented by the countries along the Rhine. Thanks to multi-billion euro investments in sewage treatment facilities, even the tributary rivers in the Ruhr Area -- long known for their spewing waste -- are now so clean that the first salmon are thriving there again. The regional newspaper Westdeutsche Allgemeine Zeitung proclaimed: No fairytale could be more beautiful.

Throughout the 185,000 square kilometer (71,429 square mile) watershed of Europes great river, barriers are being removed from Rhine tributaries and the rivers are being seeded with salmon fingerlings in the hope that the migratory fish will, after spending years feeding in northern seas, instinctively return to their respective birthplaces -- just as they have for over 500,000 years, in the words of Switzerland's Federal Office for the Environment.

But the Swiss, whose High Rhine fishermen regarded salmon as part of their principal catch just a century ago, are disappointed with the results of the species protection project -- even though the program, which also forbids salmon fishing in the northern Atlantic and includes fish-friendly locks along the lower stretches of the river, has been declared one of the most elaborate species protection measures in human history by the Association of German Sports Anglers (VDSF). 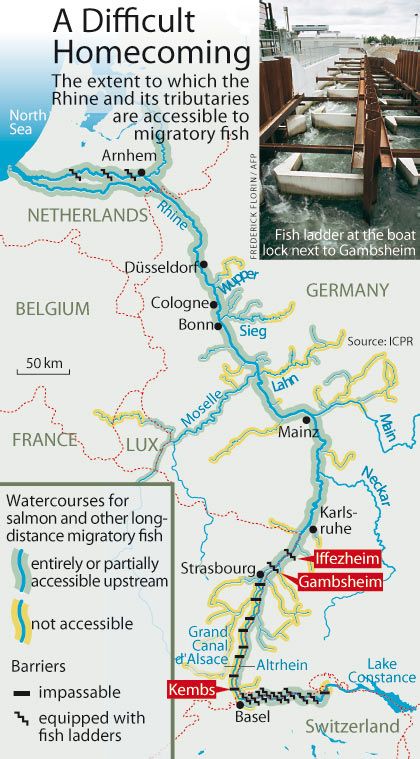 The path of salmon up the Rhine.

Switzerland, Europes environmental poster child, spends millions so that fish can pass through its own sections of the river and in addition pays for 5 percent of the stocked salmon in the entire 1,320 kilometer long Rhine watershed. Yet the Bern-based Federal Office for the Environment complains that Switzerland is, along with Luxembourg, the only country that has not yet been able to celebrate the successful return of the salmon. Switzerland, it turns out, is still a long way from the ecologists dream of stable local stocks of salmon that can reproduce on their own.

The culprit, environmentalists say? Paris. The problem lies along the 100-kilometer (62-mile) stretch of Rhine marking the French-German border in the southern Upper Rhine. Salmon, sea trout and other migrating fish swimming up and down this stretch of the river must pass through what the VDSF describes as a deadly gauntlet: a long chain of hydroelectric stations belonging to the French national energy monopoly Electricité de France (EDF). Fish ladders are lacking, and the whirling turbines are anything but conducive to fish migration.

How many of the young fish on their way down the river are hacked to sushi by the turbines of the generating stations emerges in a study by the Internationalen Kommission zum Schutz des Rheins (International Commission for the Protection of the Rhine -- IKSR): the mortality rate of migrating young salmon along this stretch of the river lies between 26 and 40 percent. For eels its even higher, between 74 and 90 percent. These are death rates, says the IKSR, that have a catastrophic effect on the stock of each species.

These hydroelectric plants block the return path from the sea to the salmons traditional spawning grounds. Even though the glistening, silvery fish are muscular and can jump several meters in the air, the towering 11- to 16-meter (36- to 52-foot) EDF dams on the Upper Rhine are insurmountable.

Environmental activists and politicians have reacted bitterly to EDFs strategy to delay the building of more fish ladders. Only two functional fish ladders have been installed, at hydroelectric power stations in Iffezheim (Germany) and Gambsheim (France). The total expenditure was about €20 million ($29.5 million). And by 2015, as decided in October by the ministers of the countries along the Rhine, the next dam, in Strasbourg, will get a system to allow fish migration.

But that's it. For economic reasons, EDF -- a company with annual sales of around €60 billion ($88.6 billion) -- refuses to outfit its plants in Gerstheim, Rhinau, Marckolsheim and Vogelgrün, highly profitable operations which have also long benefited from tax write-offs, with fish ladders anytime soon.

Instead, the corporation wants to catch salmon stuck before the first dam barrier. It would then have them transported by tanker trucks upstream to Basel, bypassing all of the EDF power plants. These salmon taxis have already been successfully tested on a 40-kilometer (25-mile) section of the Garonne River, the energy company argues. The proposal has been derided by environmental experts, who dismiss it as absurd and completely contrary to nature foolishness. Last week the environmental magazine natur + kosmos (nature + cosmos) bestowed its satirical "Hammer des Monats" (Hammer of the Month) on EDF president Pierre Gadonneix. 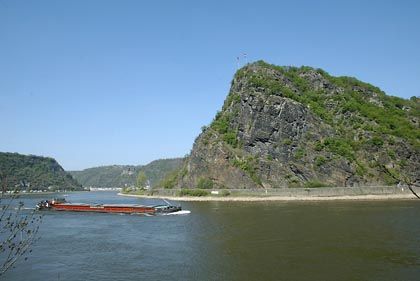 At the surface, the Rhine River can be beautiful. Below, salmon have a tough time surviving.

Critics say the Garonne is a bad place to test a system destined for the Rhine. The French river has no tributaries that lead to spawning areas between its two "taxi" stops. On the Rhine, in contrast, no one can know which feeder river the salmon will need to climb in order to spawn in the streams of their birth, whether they want to go to the Altrhein or the Ill, the Kinzig or Dreisam, in the words of limnologist Jörg Lange in Freiburg.

Additionally, says Lange, its not just about the salmon, which simply serve as a symbol and an indicator. The goal of the Rhine-side countries, which have now established the program Lachs 2020 (Salmon 2020), is much greater: The entire river system should also be passable for other long-distance travelers like eels and lampreys, sea trout and shad. And where the demanding salmon spawns, beavers and kingfishers can also settle again.

If EDF refuses to pay for further fish ladders (total cost, according to IKSR: €60 million, or $88.5 million), the migrating salmon could indirectly become late victims of World War I.

In the Treaty of Versailles in 1919, France granted itself exclusive rights to the use of water power on the Upper Rhine. And the state-owned EDF, in refusing to build more fish ladders, can invoke valid licenses from the French government that date from the 1950s and 1960s. The licenses first expire between 2028 and 2048 and dont include any environmental conditions whatsoever. 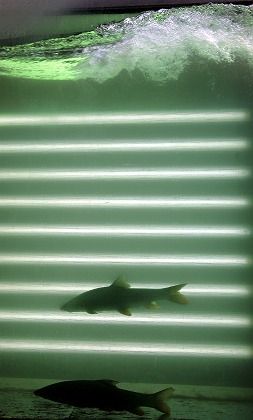 A salmon on its way through a fish ladder at the French dam in Gambsheim.

Meanwhile, the disgruntled Swiss believe they have found the legal leverage they need to wrest environmental concessions from EDF. The Swiss have a 20 percent stake in the power plant in Kembs, which sits at the border and is the oldest and southernmost French power station on the Rhine. The license for the Kembs station dates from 1932 and expires this New Years Eve.

In the course of the relicensing, an alliance of seven Swiss environmental organizations want EDF to let considerably more water into the original streambed of the Rhine at Kembs, where the majority of the Rhines water is directed into the Grand Canal of Alsace. For the benefit of the canal, at times the bed of the Old Rhine runs nearly dry.

It is not just that a revitalization of the Old Rhine could make a 45-kilometer (28-mile) long barrier-free salmon migration route with a 64-hectare (158-acre) spawning habitat. Through systematic renaturation, enthuses environmental scientist Lange, a synthesis of flood support, nature conservation and local recreation unique to Central Europe could also be created.

EDF resists the change, since the company faces certain losses in production if, as called for by environmental activists, it triples the minimum outflow into the Old Rhine from its canal power plant in Kembs. The energy company also doubts the Swiss ability to carry out their complaint in the licensing process. And it even cites the threat of damage to Frances territorial sovereignty.

The Swiss nature conservation and fishery organizations, for their part, claim the strong interest that environmentally-conscious Switzerland has in the Rhine Protection Commission being fully complied with downriver from Basel as well. Making rivers suitable for migrating fish is also a goal of EU Water Framework Directive.

Swiss environmental lawyer Tobias Winzeler doesnt want to let Frances reference to the 88-year-old Treaty of Versailles stand. Considering all the environmental conservation laws passed since World War I, France cant simply point to an old and in many parts probably obsolete treaty.

If Winzeler's reasoning doesn't win out, more salmon will continue to die for Versailles.