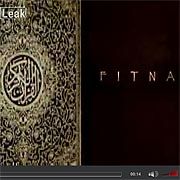 Dutch right-wing populist Geert Wilders released his long-anticipated anti-Koran film "Fitna," the Arabic word for "ordeal," on the Internet. The controversial 15-minute film, which stigmatizes the Koran, was made available for download Thursday afternoon on the Web site Liveleak in versions in Dutch and English.

The video shows attacks conducted by radical Islamists and images of murdered Dutch director Theo van Gogh next to passages from the Koran. It also includes recordings of the victims of the Sept. 11, 2001 terrorist attacks made shortly before their death as well as radical Muslim preachers calling for the beheading of Jews. A young girl is shown describing Jews as pigs and apes. So too are the bodies of terrorist victims and scenes of hostage decapitations in Iraq.

"Fitna" also shows one of the controversial Muhammad caricatures printed two years ago by Denmark's Jyllands-Posten newspaper. The cartoon shows the prophet Muhammad with a ticking time bomb in his turban. At the start of the film, a timer next to the bomb shows 15 minutes until detonation -- and in the end, zero.

Wilders' own messages are shown just before the close of the film: "The government insists that you respect Islam, but Islam has no respect for you." Islam, he says, "wants to rule, submit and seeks to destroy our Western civilization. In 1945, Nazism was defeated in Europe. In 1989, Communism was defeated in Europe. Now, the Islamic ideology has to be defeated." The film ends with a call to "Stop Islamization, defend our freedom."

Wilders' first announced the film back in November. Numerous Muslim countries, including Pakistan, Indonesia, Egypt and Afghanistan issued complaints in the run-up to the planned release of "Fitna," fearing it would lead to the kind of violent protests seen in the wake of the publication of the Muhammad caricatures. But Wilders, 45, ignored Dutch security officials and politicians who warned him against releasing the film. His right-wing populist PVV party has called for a freeze on allowing Muslims to immigrate to the Netherlands and for a ban on the Koran.

For four years now, Wilders has been firing off hateful tirades and disrespectful salvos in the Netherlands -- gunning mostly at the political establishment, leftist intellectuals and Eurocrats as well as Muslims, at home and abroad. He is considered one of the Dutch parliament's most adept speakers and was even voted politician of the year by Dutch journalists in 2007.