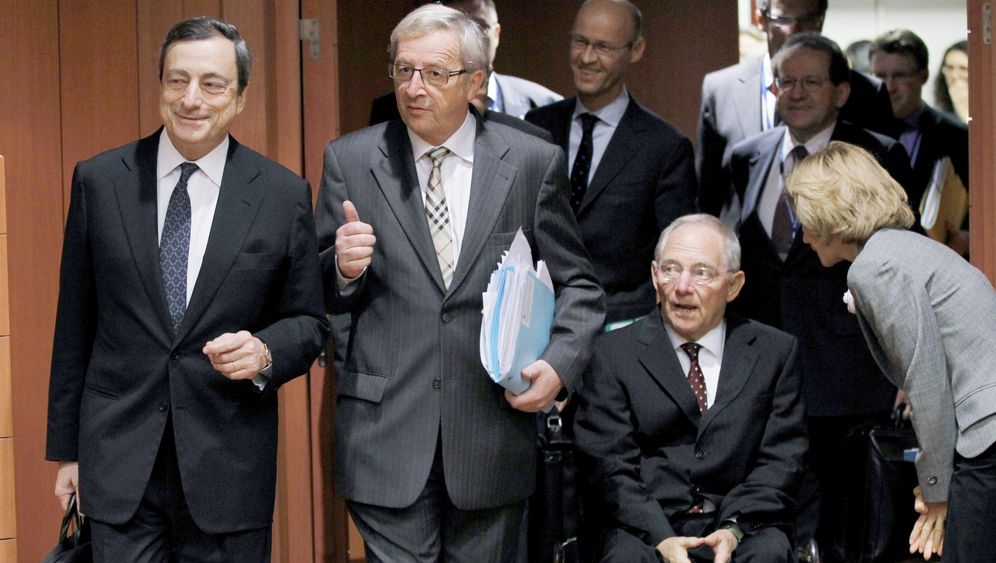 When it comes to fiscal stability, frugality and responsible economic management, German Chancellor Angela Merkel and Finance Minister Wolfgang Schäuble have only one role model: themselves.

The chancellor praises herself and her team for having "a clear compass for reducing debt," and insists: "Getting our finances in order is good for our country."

Her finance minister, a member of Merkel's conservative Christian Democrats, is no less effusive. Germany, says Schäuble, is a "safe haven" for capital from around the world, because "the entire world has great confidence in both the performance and soundness of the fiscal policies of the Federal Republic of Germany."

Developments in the financial markets seem to bear him out. Last week, the suspicions of international investors reached the stable core of the euro zone. Investors embarked on a massive selloff of securities issued by supposedly model countries like Finland and Austria and sought refuge in German government bonds.

But it is debatable how much longer Germany can be seen as a refuge of stability and security. In reality, German government finances are not nearly in as good shape as the chancellor and the finance minister would have us believe. The way that certain important indices are developing suggests that Germany may not retain its position as a role model in the long term. Government debt as a percentage of GDP is already at more than 80 percent, which compared to other European Union countries is by no means exemplary, but in fact average at best.

When it comes to their debt-to-GDP ratios, even ailing countries like Spain are in better shape, with values significantly lower than 80 percent. Critics, irritated by Merkel's and Schäuble's overly confident rhetoric, are beginning to find fault with Europe's self-proclaimed model country. "I think that the level of German debt is troubling," says Luxembourg Prime Minister Jean-Claude Juncker, whose country has a debt-to-GDP ratio of just 20 percent.

Despite the nascent criticism, Merkel and Schäuble will be patting themselves on the back once again at this week's final debate on the 2012 federal budget in the Bundestag, the German parliament. They will point out that Germany is in much better shape than its partners in the euro zone, not to mention the United States. They will also praise conditions in the labor market, rising tax revenues and the declining budget deficit.

It is certainly true that Schäuble expects the German deficit to decline from 1.3 percent of GDP this year to less than 1 percent next year. But it's none of his doing. In fact, he wants to incur more debt next year than in 2011. It is only state and local governments that are slated to borrow less next year, thereby helping to reduce Germany's deficit. In contrast, Schäuble expects €26 billion ($35 billion) in net new borrowing in 2012, an increase of several billion euros over this year.

The reason for the embarrassing increase is a noticeable reduction in austerity efforts. Flush with cash, Germany's coalition government of the conservatives and the business-friendly Free Democratic Party (FDP) has rediscovered its taste for spending money. At their most recent meeting, the leaders of the CDU, its Bavarian sister party, the Christian Social Union (CSU), and the FDP approved new spending that will place a significant burden on the federal budget in the future.

For example, Transportation Minister Peter Ramsauer of the CSU will see his funding for 2012 increase by €1 billion over the previously budgeted amount. Ironically, in its most recent assessment the German Federal Audit Office already criticized Ramsauer for not spending the funds allocated to his ministry sensibly.

Some €1.5 billion have been earmarked for a child-care subsidy that the government plans to grant parents who choose not to use public child-care facilities but to look after their pre-school children at home instead. The German government is also reintroducing the full Christmas bonus for civil servants, to the tune of €500 million.

The government will spend €1 billion to fund a planned subsidy for private long-term care insurance, as well as €4 billion on previously announced tax reforms. "Merkel and Schäuble have now abandoned the goal of budget consolidation," says Carsten Schneider, budget affairs spokesman for the opposition Social Democrats (SPD). "The money is being squandered on child-care subsidies and tax cuts." Jens Weidmann, the president of Germany's central bank, the Bundesbank, warns that the tax cuts at least will have to be offset elsewhere in the budget. "Germany mustn't lose any time in balancing its budget," he says.

The mood of generosity has also taken hold at lower levels within the coalition. For instance, the budget committee approved €60 million in additional funding for the government commissioner for culture and the media, Bernd Neumann, whose budget was originally targeted for €15 million in cuts.

Other key figures also suggest that Germany is not doing as well as some believe. Admittedly, the budget deficit continues to shrink. And the federal government budget actually seems to be well on its way to complying with a new "debt ceiling" rule in the German constitution that requires the government to reduce new borrowing to almost zero by 2016.

But a balanced budget alone is not enough to bring the debt ratio, now at more than 80 percent, down to the 60 percent of GDP that is required under the Maastricht Treaty within a reasonable amount of time. In fact, many economists believe that budget surpluses are needed if this goal is to be achieved. They have in mind a figure known as the primary balance, which is the difference between government revenues excluding new debt and government spending excluding debt-service costs (i.e. interest payments).

If this balance is in positive territory, a country can cover its current expenses and meet at least some of its debt service obligations. If it is negative, the country must service all of its old debt with new borrowing, resulting in a rapidly growing mountain of debt.

The primary balance became an important figure in the bailout programs for Greece, Portugal and Ireland. In return for support payments, the donor countries, most notably Germany, expect the recipient countries to generate high primary budget surpluses for years. They argue that this is not only absolutely necessary, but also feasible.

Ironically, Germany has rarely lived up to its own standards in the past. From 2002 to 2006, for example, the country's primary balance was chronically in deficit.

Again by comparison, Italy is projected to achieve a primary surplus of 3.1 percent next year and 4.4 percent in 2013. If the government of new Italian Prime Minister Mario Monti imposes austerity programs, as called for by European Central Bank (ECB) President Mario Draghi and others, the surpluses will likely be even higher.

Germany is still a long way from numbers like these, which makes the goal of stabilizing the debt-to-GDP ratio at 60 percent a distant one indeed. To achieve this target within 10 years, says Christian Breuer, a financial expert with the Munich-based Ifo Institute for Economic Research, "Germany, even under optimistic assumptions, would need a primary surplus of 2 percent."

Thorsten Polleit, chief economist of Barclays Capital Deutschland, arrives at even higher numbers in an unpublished study. Primary surpluses of 2.7 percent are necessary to bring down the debt level to the 60 percent limit within a decade, says Polleit. He adds that surpluses of 4.7 percent would be needed to achieve the same goal within five years.

So far the German government has based its budget forecasts solely on the presumption of strong economic development. This is not likely to be the case for much longer, especially if the economy continues to cool down and tax revenues decline. Polleit believes that Schäuble's failure to economize during the economic upturn is now coming home to roost. "As a precautionary measure, the German government should impose a new austerity program," says Polleit, noting that if it does not, Germany will run the risk of being scrutinized more closely by the rating agencies. "Their top rating for German bonds is everything but guaranteed."

Indeed, the goodwill Germany is now enjoying on the bond markets, to the delight of its finance minister, could quickly evaporate. Yields on German government bonds are currently at record lows, with 10-year bonds offering returns of only about 1.8 percent. But if those interest rates were to increase by an average of only 1 percent, the German government budget would face an additional annual burden of €20 billion in the medium term.

Nevertheless, Schäuble feels that he is on the safe side. At the moment, he can easily satisfy the constitutional debt-ceiling requirements, which force him to continue reducing the deficit. In each year until 2015, Germany's new borrowing will remain about €10 billion below the imposed upper limit.

This has less to do with Schäuble's willingness to cut spending than with the fact that his estimate of the baseline figure for reducing debt was much too high last year. Thanks to high tax revenues, he is now able to keep new borrowing well within the debt-ceiling requirements.

The FDP feels that Schäuble is too unambitious for its taste. It wants to force the finance minister to consolidate finances more vigorously. The Free Democrats are demanding that Schäuble already achieve the goal of a federal budget that includes almost no new borrowing in 2014, rather than two years later.

"By doing that, we would demonstrate how serious we are about sorting out our finances," says FDP budget expert Florian Toncar. "That should be worth every effort on our part."