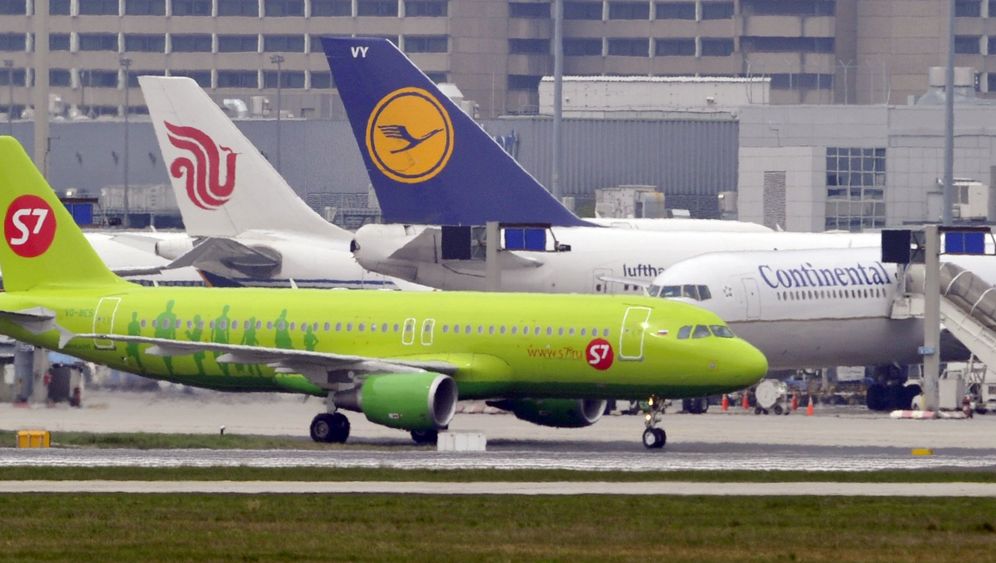 After reviewing current weather conditions, the German flight safety agency DFS on Saturday made the decision to keep the country's airspace closed until at least 2 a.m. on Sunday morning, a spokesman for the agency told SPIEGEL ONLINE. The official said that the ash plume from the eruption of Iceland's Eyjafjallajökull volcano had further spread across Germany and other parts of Europe, and there were still no signs of the dangerous cloud abating. Previously, an order had been given to close German airspace until 2 p.m. on Saturday.

In Switzerland, Austria, France, Great Britain, Belgium and northern Italy, airports reported they would be closed until Saturday evening at the earliest. The unprecedented closure of Northern European airspace has affected hundreds of thousands of travelers.

On Saturday, the cloud of volcanic ash still covered large parts of Scandinavia and Central Europe and continued to head in a southeasterly direction. The only countries in the north that appeared to be spared were Lithuania, Latvia and Belarus. In Southern Europe, the only countries still unaffected by the cloud were Portugal, Spain, central and southern Italy, parts of the Balkans, Greece and a small belt in the Black Sea region, European flight safety agency Eurocontrol reported.

German Chancellor Angela Merkel's travel plans have also been disrupted by the volcanic eruption in Iceland, which began on Wednesday and was still continuing on Saturday. The chancellor, who had been returning from a trip to the United States and was en route from San Francisco to Berlin, had to be rerouted to Lisbon on Friday, where she met with the country's prime minister and spent the night. On Saturday, her office said she would fly to Rome during the afternoon. There were also questions on Saturday about how Merkel, German Foreign Minister Guido Westerwelle and German President Horst Köhler would be able to fly to Krakow, Poland, on Sunday for the funeral of Polish President Lech Kaczynski and his wife.

Meanwhile, the transportation of four German Bundeswehr armed forces soldiers killed in an attack by the Taliban on Thursday has been delayed until Monday at the earliest. The plane that was supposed to pick up the fallen soldiers as well as Bundeswehr General Inspector Volker Wieker, is now slated to leave Germany on Sunday, a Defense Ministry spokesperson said. A memorial service for the men in Mazar-e-Sharif, Afghanistan, is expected to take place on Monday.

And German Defense Minister Karl-Theodor zu Guttenberg as well as five soldiers seriously injured in the attack are grounded in Istanbul, Turkey, waiting for European airspace to reopen. On Friday, they were flown out of Afghanistan in a specially equipped Medevac Airbus air ambulance, but they were unable to reach Germany after the closure of the airspace. It was still unclear whether they would be able to continue on from Germany on Saturday.

Officials at the European air safety agency Eurocontrol said they only expected 6,000 flights in Europe on Saturday, down from the usual 22,000, or two-thirds less. Meteorologists said they expected the disruptions to air traffic to last for at least another 24 hours. Takeoffs and landings for civilian jets in most of Northern and Central Europe were not possible on Saturday. On Friday, only 10,400 flights were completed, down from a usual Friday figure of 29,000.

Flight Disruptions to Continue Through Sunday

German air safety officials said they feared the closure of Germany's international airports would likely have to be extended until midday on Sunday, but a final decision is expected later Saturday.

Weather conditions in Germany on Saturday aren't helping, either. The country is experiencing a high-pressure front that is stretching from the Azores islands to Central Europe, Helmut Malewski of the German Weather Service in Offenbach said. He said the ash plume was unlikely to dissipate through movement or rain.

At the start of the week, a low-pressure front is expected in Germany. Nevertheless, meteorologists said the winds coming from the northwest that are currently pushing the ash from Iceland to central Europe, would likely continue.

"The situation hasn't changed much since Friday," said Eurocontrol spokesman Kenneth Thomas. The dangerous part of the ash plume "has just moved a little to the south and the east," he said.

All 16 German international airports and all regional airports currently remain closed. And on Saturday, Eyjafjallajökull released another giant plum of smoke and ash into the atmosphere. Officials at the Icelandic Meteoroogical Office said they had not observed any significant changes in activity in the volcano under the Eyjafjallajökull glacier overnight.

And even when German airspace reopens, passengers will have to contend with overbooked flights, with tens of thousands of stranded travelers. One passenger seeking to rebook a ticket in business class from Berlin to Washington, DC, reported Saturday that the soonest seat available on a direct flight from Germany to the US capital on German flag carrier Lufthansa would be on April 26, more than a week from now.

A spokesperson for the airline said on Saturday that Lufthansa didn't have a single plane in the air anywhere in the world. "That has never happened before," the spokesman said, according to Reuters. The company has not stated what kind of financial impact the natural disaster is having on Lufthansa, but it is expected to be major for most European airlines.