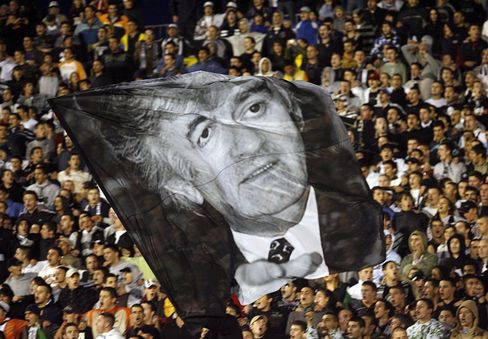 As investigators piece together Radovan Karadzic's 13 years in hiding, reports have emerged that he spent time in Austria working as a "miracle healer" and using the identity of a real man living outside Belgrade. The hunt continues for those who helped the accused war criminal escape justice.

The Austrian daily Kurier has reported that Karadzic visited his Serbian wife at home as a "miracle healer" in Vienna in mid-2006, when the couple was trying to have a child. The paper's source -- identified only by a pseudonym -- said Karadzic used the name "Pera" and was "very unlikeable" and "very haughty." "He was always dressed in black and had a long chain with a cross hanging around his neck," the man told the paper. "He looked like an Orthodox priest."

Serbian authorities say they arrested Karadzic near Belgrade on Monday. He's now awaiting extradition to The Hague, where he faces 11 charges, including genocide, before the UN war crimes tribunal based there.

But Sveta Vujacic, Karadzic's lawyer, contested the official version of the arrest. According to Vujacic the arrest took place on Friday -- and Karadzic was removed from a public bus in a Belgrade suburb, hooded and taken to an unknown location for three days. "We have three witnesses who have contacted us, who all saw this," Vujacic said, according to the AP.

Authorities are now trying to piece together the network that allowed Karadzic to live with merely a disguise and papers identifying him as Dragan Dabic. On Thursday police identified the real Dragan Dabic, a 66-year-old construction worker living in the Serbian town of Ruma, just north of Belgrade. "Dabic's ID differs from Karadzic's only in the photographs of the two (men)," Rasim Ljajic, a government official in charge of investigating war crimes, told the AP.

The name Karadzic chose to hide behind appears to be a rather common one. One official told the AP that there were at least seven Dragan Dabics registered as living in the Bosnia city of Sarajevo alone.

Officials are trying to determine whether the documents are fakes, or officially obtained copies. Karadzic is believed to have obtained the papers before Slobodan Milosevic was ousted from power in Serbia in Oct. 2000, according to Bruno Vekaric, a spokesman for Serbia's war crimes prosecutor.

Vekaric added that Serbian officials have promised to track down and prosecute anyone who helped Karadzic successfully evade notice of law enforcement officials. "The point is to finish The Hague story," Vekaric told the AP. "Whoever was helping Karadzic was committing a criminal act, and they know it."

No date has yet to be set for Karadzic's trial on war crimes charges at The Hague, where he intends to defend himself, according to his lawyer. In the meantime, Karadzic is being held in Belgrade, pending a decision on his appeal against extradition.

Karadzic's family will not be allowed to visit him in detention. Miroslave Lajcak, the Slovak international administrator of Bosnia, banned the family from leaving Bosnia in January because he believed they were helping Karadzic elude police. Lajcak has kept the ban in place following Karadzic's capture. "There will be enough opportunities in the future for them to see their dad, while, unfortunately many people from Srebrenica will never be able to see theirs," Lajcak said, according to the AP.

People will get a chance to see the former Bosnian Serb chief looking more like his old self when he does stand trial: Karadzic requested and obtained a haircut and shave Wednesday.