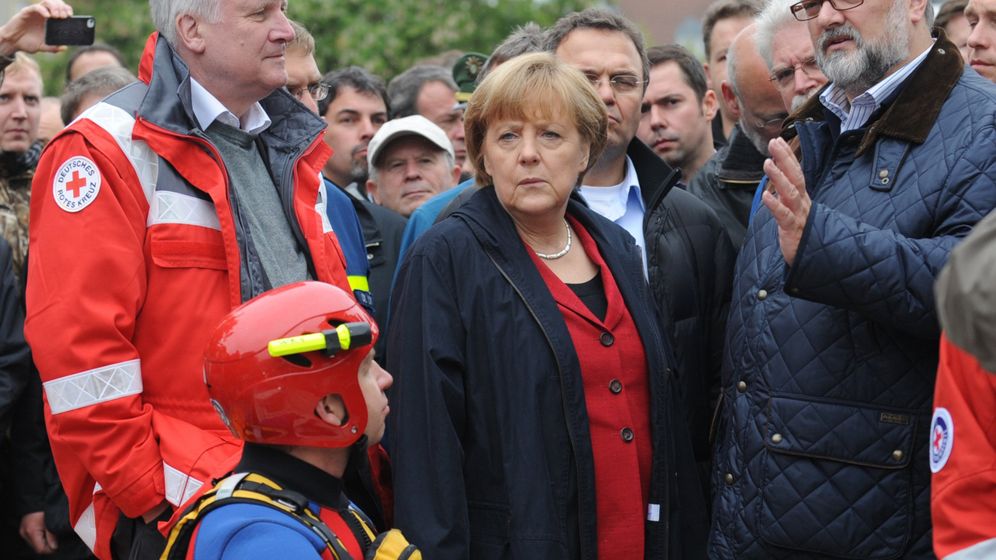 Chancellor Angela Merkel toured some of the worst-affected areas of flooding in Germany on Tuesday and pledged €100 million ($130 million) in immediate federal government aid.

Her first stop was the Bavarian city of Passau, which has just suffered its worst flood in 500 years.

After a helicopter ride over the region, she expressed surprise at the extent of the flooding, saying it looked even more dramatic than the 2002 disaster that devastated parts of eastern Germany.

"The main thing is that we make payments in an unbureaucratic way," she said. "We want to help -- even if the water levels are slowly receding, there will be lasting damage."

Merkel's response to the crisis is being closely watched four months ahead of a general election in September. Her predecessor Gerhard Schröder scored points with voters ahead of the 2002 election with a hands-on approach to the flooding, touring dikes in rubber boots and quickly establishing a large relief fund.

While touring Passau, Merkel wore normal shoes. She was accompanied by Bavarian Governor Horst Seehofer, a political ally of hers who faces a regional election in Bavaria in September too. Seehofer said his government would separately provide an additional €50 million in regional aid for Bavaria. He also thanked Merkel for her "solidarity."

"Bavaria is suffering a disaster," Seehofer said, adding that he was proud of how well people were handling it.

Dresden May Be Spared 2002 Disaster Repeat

Accompanied by an entourage of aides and rescue workers, Merkel stared out at the Danube, swollen by days of torrential rain, before walking through a part of town that wasn't submerged in floodwater. She shook hands with soldiers, rescue workers and residents and chatted with a woman selling bread. The woman gave her a pretzel.

After an hour she drove off, heading for the towns of Pirna in Saxony and Greiz in Thuringia.

Water levels in Passau fell slightly overnight after reaching 12.89 meters on Monday night, the highest level since 1501. But the worst is yet to come for other parts of Germany. The eastern state of Saxony-Anhalt, for example, faces higher water levels than during the disastrous flooding of 2002. In Halle, hundreds of helpers, including soldiers, toiled to shore up the sodden dikes. In the town of Bitterfeld-Wolfen, some 10,000 people were told to leave their homes because a lake was expected to spill over its banks.

However, many communities have rebuilt and improved their dikes since 2002, and are expected to be spared extensive damage this time around. In the eastern city of Dresden, a baroque architectural jewel that was swamped in the 2002 flood, the Elbe River has been rising relentlessly against a barrier of sandbags, and one of the bridges over it was closed. A spokesman for the city's crisis management authority said: "We most likely won't see pictures of a flooded Dresden old town like in 2002." But at this point, nobody can be sure.

At Least €100 Mln Damage to Road and Rail Network

German Transport Minister Peter Ramsauer said the road and rail network alone had sustained more than €100 million worth of damage. "You can only see the true damage once the water is gone," he told Deutsche Verkehrs-Zeitung on Tuesday. "Then you can put a figure on the exact sum."

The flooding has hit large parts of central Europe. Germany, the Czech Republic and Austria have been the worst affected so far, but there has also been high water in Slovakia, Hungary and Poland. By Monday, the death toll in Europe had reached at least nine, including at least five in the Czech Republic.

Thousands of people have been evacuated from their homes and the German military has been deployed to help pile up sandbags and conduct rescue operations.

At the Prague Zoo, some 1,000 animals were moved to higher ground in a complex operation in which zookeepers had to tranquilize tigers and other large animals.