German football club FC Bayern Munich is adamant about landing Callum Hudson-Odoi on its team. The English national-team player from FC Chelsea, an incredibly fast wing who is a strong dribbler and just 18 years old, is very possibly the perfect successor to Franck Ribéry. Bayern is prepared to pay over 30 million euro for Hudson-Odoi, but the transfer is currently in jeopardy because of Chelsea's treatment of 29 underage players.

Documents from the whistleblower platform Football Leaks shed light on the obscene amounts of money the Premier League club offered in an effort to lure the children, how they have pressured their parents and run roughshod over the rules of football's governing bodies.

Chelsea FC became one of the first English football clubs to catapult itself to the top of the table by injecting massive amounts of cash into the team. Russian oligarch Roman Abramovich bought the tradition-steeped club 16 years ago, and it soon became one of the most successful squads in Europe. The London-based team also became a trailblazer in the global race for the greatest talents in the football business. In order to veil the improper deals it was cutting with the young players, the team apparently deceived regulators about their personal details and worked with other major English clubs to play in an unchecked parallel league.

The case of a Croatian student named Karlo Ziger provides an example of how Chelsea FC dealt with young footballers. When Chelsea scouts discovered the tall goalkeeper, the club wasn't allowed to transfer him. The rules of global football governing body FIFA forbid the signing of minors under the age of 16 across national borders.

But the Football Leaks trove of documents contains a draft contract dating from spring 2014 in which FC Chelsea bound the Croatian player to London with a so-called scholarship agreement beginning in July 2017. The deal stipulated he would receive a 120,000-pounds (116,000-euro) signing bonus. The documents state that Ziger had just turned 12 at the time of the contract's signing. Premier League rules, however, prohibit attracting minors with offers of money.

Vanished from the Records

Email correspondence between a lawyer for Chelsea and an external adviser reveals how cunning such option contracts can be. Because it is difficult to hold minors accountable for their signatures, the exchange noted, they wanted the pressure to fall on parents or guardians. "The purpose of the agreement was to have the parents believe that they are personally obliged to ensure that the player signs with Chelsea and that he cannot sign elsewhere," the adviser wrote. And he seemed confident of success: "Parents may sign whatever is put in front of them."

Other contracts show how parents bowed to pressure and declared themselves "unconditionally and irrevocably" liable for all costs that could arise from a refusal by their son, including legal costs, claims for damages and penalties.

Karlo Ziger had already given his word to Chelsea in 2014, even though the club wasn't allowed to legally transfer him until three years later. Was the club just waiting to see how the boy would develop in his home country during that time? There's a number of indications that it wasn't waiting at all. Reporting by DER SPIEGEL and the Croatian magazine Nacional revealed that Ziger's name suddenly vanished from the records of the Croatian Football Federation and that the last game he played with NK Zagreb was in September 2013. In February 2014, the goalkeeper was even deregistered from the association. He didn't reappear until the age of 16 -- as a player for Chelsea.

What happened in the intervening years?

In an interview with a Croatian newspaper, his father said that the family had moved to London in early 2014. A residency permit issued to the player seems to suggest the same. In addition, an internal club spreadsheet shows that Ziger trained with the Chelsea youth club on more than 250 days between 2014 and 2016.

In summer 2017, Chelsea officially applied to FIFA for permission for Ziger's transfer from Croatia to England. The club listed a side street in the Croatian capital as the player's home address. In doing so, Chelsea appears to have tried to make it look as though Ziger's move to London hadn't yet taken place. To this day, the club's website gives the impression that the player didn't join Chelsea until 2017. 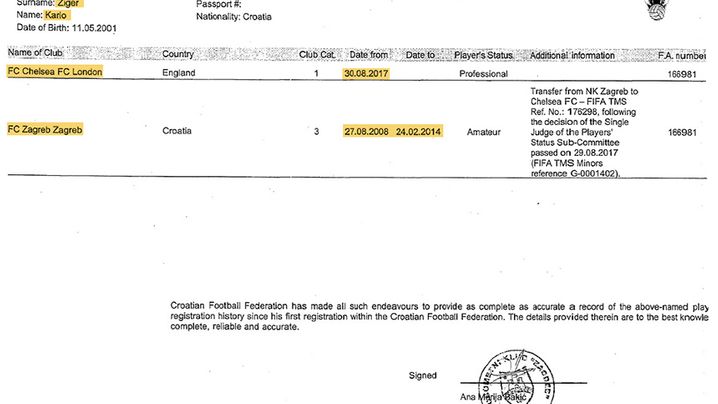 It appears that the club managed to hide Ziger from the media, football's governing bodies and competitors for three years. But how is a young, talented player supposed to develop when he's not registered with any association and, therefore, doesn't have an official playing license? A young goalkeeper like Ziger requires constant game experience to improve. Ziger's father provided an answer to this question in 2014: "Every weekend, they play games with no score," Darko Ziger said in an interview. What, though, does that mean exactly?

England is currently regarded as being at the forefront in terms of grooming tomorrow's football talent. Even German clubs are snapping up talent developed in England. Indeed, the debate over Germany's ability to develop young talent has only grown in intensity since the last of the Bundesliga clubs were eliminated from the Champions League in the Round of 16. Experts have advised German clubs to take their cue from England -- and young stars like Hudson-Odoi are regarded as prime examples. But these debates include little discussion about the protection of minors.

Clubs that abide by the rules, after all, are clearly placing themselves at a competitive disadvantage in the football market. The highly professionalized academies of the British top clubs apparently let young players play against each other for years --unchecked and in violation of the rules. In Germany, by contrast, even 10-year-old child have to be registered with the association if they want to take part in competitive matches. English top academies regularly played against each other in a "Games Programme" that they declared to be friendly matches and in which they used unregistered players.

FC Chelsea has even admitted as much. In spring 2017, the Premier League and FC Chelsea exchanged several emails regarding suspicions the club was training up-and-coming players without official playing licenses. In one mail, the club asked for more understanding: "It is important that the Premier League understands that this is a widespread issue." And it would "neither be fair nor reasonable for CFC (FC Chelsea) to be singled out in the circumstances."

Chelsea even sent the league a 24-page document listing allegedly unregistered youth players from 20 different British clubs. As supporting evidence, the club presented social media posts of players that included pictures of themselves during training or games. They document a kind of parallel world in the shadow of the football rules.

Premier League officials began investigating the youth development system. A document dating from January 2018 states that 12 club academies were investigated and four clubs penalized. The Premier League did not answer questions from DER SPIEGEL and the journalism network European Investigative Collaborations (EIC) about why it had overlooked the practice for years and what the sanctions ultimately entailed. A spokesperson confirmed merely that the league had become aware of the problem two years ago. "We investigated and dealt with the matter," the spokesperson said. "Now we have a robust Academy player identification system in place." FC Chelsea did not respond in detail to several inquiries from journalists. "We do not comment on speculation concerning confidential contracts or player related matters," a spokesman said.

At the end of February, FIFA slapped Chelsea with a transfer ban until summer 2020. In response, the club announced it had acted "in accordance with the relevant regulations." FIFA investigators see the matter differently: They determined the club had provided forbidden financial incentives to minors, that it had spurred them to participate in transfers that violated the rules and interfered with the decision-making independence of other clubs. In addition, the body found that Chelsea had acted in "bad faith" toward investigators because the club had deliberately withheld information from them.

FIFA also imposed a fine of 510,000 francs (455,000 euros) on the English Football Association, a decision the national organizing body has appealed. According to FIFA investigators, the association should have been cognizant of the fact that Chelsea had been using unregistered players. The global football association and FA also sparred over whether Chelsea's option contracts conform to the rules. The English Football Association did not comment on the matter.

Chelsea also intends to appeal the penalty, or at least achieve a postponement of the transfer ban, as FC Barcelona did five years ago. The transfer ban was suspended during the appeals process at the time, enabling Barça to buy up players for a reported 166 million euros and thus survive the sanctions without any harm done to the team. FIFA is apparently now looking into deliberately preventing this from happening again. The relevant FIFA commission has refused to allow the suspension of Chelsea's ban during the appeal proceedings. The club said it was "astonished" by the decision. It will likely take the case to the International Court of Arbitration for Sport.

This legal battle will likely be closely monitored in Munich. It could be that the ruling determines whether Callum Hudson-Odoi can transfer to the Bundesliga or not. If Chelsea loses the case, the team will not be able to afford to let the striker go. 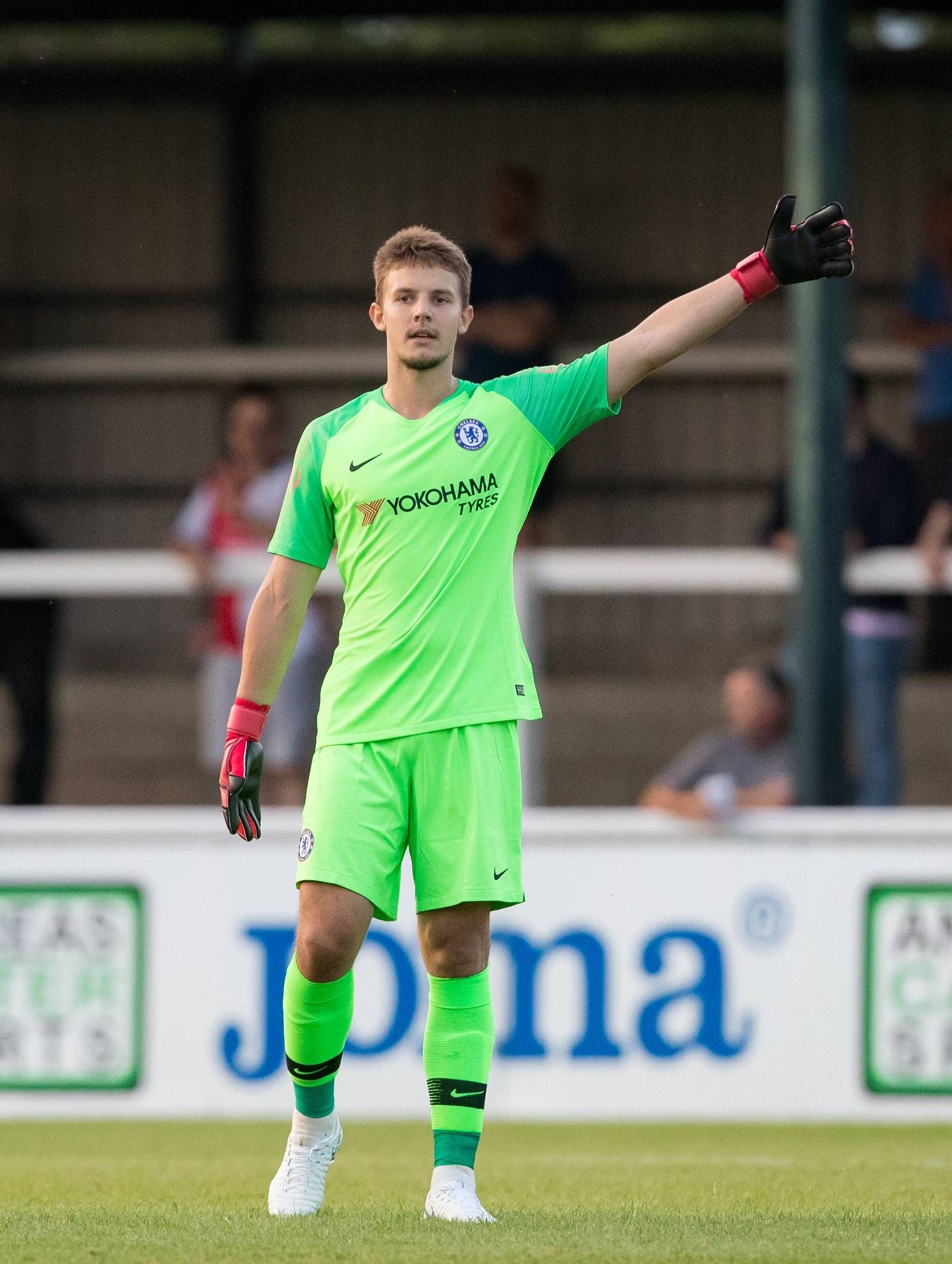