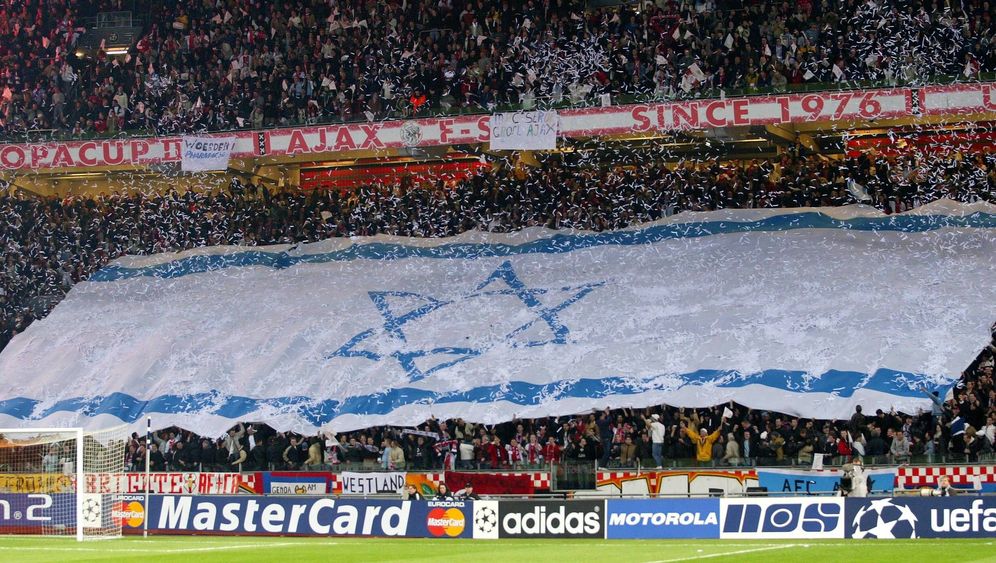 Photo Gallery: Why Tottenham and Ajax Fans Have a Jewish Identity

During Sunday's home game against West Ham United, they will likely be heard once again: songs the English Football Association (FA) would like to banish from the Tottenham Hotspur stadium. "Yid Army!", the fans at White Hart Lane in north London are fond of shouting. They've let the FA know that they won't be told which songs they can sing, with fans bellowing "We sing what we want!" during a recent game against Chelsea.

In early September, the FA warned Tottenham fans that using the term "Yid," an insult to Jews, could lead to criminal prosecution or a stadium ban, and this week the Metropolitan Police announced that it could get fans arrested. But judging from fan behavior during the soccer match against Chelsea on Sept. 28, the FA's warning has gone unheeded.

Certainly, fan traditions are difficult to ban, but Tottenham fans also don't believe their songs are anti-Semitic in the first place. In fact, it's the opposite, they say. "We sing with pride, as a sign of our identity," says James Mariner, who has held season tickets for the last decade.

Many Tottenham fans maintain a Jewish identity, and the Israeli flag is a familiar sight on the sidelines. It's a similar phenomenon to what one sees among Ajax Amsterdam fans in the Netherlands. Fans there have dubbed their club "Super Jews" and sing songs with lyrics such as, "Anyone who doesn't jump isn't a Jew." Some fans even have tattoos of the Star of David.

But neither the "Spurs" nor Ajax are Jewish clubs, and their number of Jewish fans is not particularly high. So why the Jewish symbolism?

Only About the Team

For Ajax, the image of being a Jewish club comes from the fact that Amsterdam was called the "Jerusalem of the West" before World War II. Some 80,000 Jews are said to have lived in the city at that time, and many were Ajax fans. The De Meer Stadium, where the team played home games until the 1990s, was in eastern Amsterdam, where most of the city's Jews lived at the time.

"When Ajax played teams from more provincial regions, the guest fans would take streetcars to the stadium from the main train station and go through the Jewish quarter. That's how many people saw Jews for the first time in their lives," says Hans Knoop, a Jewish journalist and spokesperson for a foundation that addresses anti-Semitism in Dutch football.

After World War II, Ajax also had some prominent Jewish leaders, among them Jaap van Prag and his son Michael, who both served as club president, along with Uri Coronel, who also served in that position. Among the players on the club's celebrated teams in the 1960s and early 1970s were Jews Bennie Muller and Sjaak Swaart, not to mention Salo Muller, a physiotherapist loved by players and fans alike.

During and after the 1970s, Ajax was repeatedly subjected to anti-Semitic hostility in the Dutch national league. To fight back, the hooligan group "F Side" demonstratively took on a Jewish image in 1976. The group is still active today, though its members aren't particularly interested in solidarity with Israel or Judaism, says journalist Knoop. "Some 90 percent of Ajax fans don't even know where Israel is," he tells SPIEGEL ONLINE. "When they yell 'Jews, Jews!' or 'Super Jews,' it's about firing up the team and nothing else."

Sometimes, opposing fan groups even turn to ugly forms of anti-Semitism in their respnse to the Ajax fans' Jewish identity. "Hamas! Hamas! Jews to the gas," fans of Feyenoord Rotterdam regularly call out when facing off against their rivals. Player Lex Immers, who was with team ADO Den Haag at the time, was banned from five games in 2011 for repeating one of his team's fan songs after a victory against Ajax: "We're going Jew hunting!"

According to Knoop, "The opposing fans aren't necessarily anti-Semitic, but they are against Ajax. And if Ajax are Jews, they have to be against the Jews."

Should it Be Allowed?

Tottenham Hotspur's Jewish background is similar to the Ajax story. The north London club was popular among Jewish immigrants who settled in the East End in the late 19th and early 20th centuries. "The Spurs were more glamorous back then than the closer West Ham United or Arsenal," says Anthony Clavane, a Jewish journalist with the tabloid Daily Mirror who published a book in August about how Jews have influenced the history of English football. Additionally, other northern London districts, such as Barnet, Hackney and Harrow, have traditionally been home to many Jews, which has also contributed to the Hotspur image.

And, just like the Ajax fans, Tottenham supporters also faced anti-Semitic insults in the 1970s and 1980s, a time when English football was plagued by rampant violence and racism. To defend themselves, Tottenham fans took on the insults and made them their own. Since then, they have called themselves the "Yid Army," but still face anti-Semitic hostility. Opposing fans sometimes make hissing noises meant to imitate the sound of concentration camp gas chambers, and in November fans at a Europa League game in Rome were attacked by fascist Lazio supporters.

Journalist Clavane says he hopes Tottenham fans will avoid the songs in question in the future. His main problem is with the "Y-word," as he calls it. Not only it is discriminatory; it was also used in the 1930s by Oswald Mosley, founder of the British Union of Fascists.

This is the main difference between Tottenham and Ajax. While the fans in Amsterdam call themselves "Jews" and "Super Jews," Hotspur fans use an offensive term that had more or less disappeared from use in the Premier League after the racism problems there had improved.

Fans say they don't mean it that way, though. "Most people know that it's all in good fun," says fan James Mariner. "We don't want to insult anyone."

That doesn't make it right, says Anthony Clavane, who asks rhetorically: "Should it be allowed to sing songs that include a word that insults a minority?"