Coronavirus does not care about ideology or geopolitics, and yet the pandemic has long been a catalyst for the rivalry between the major powers, throwing the complex geopolitical situation into sharp relief. The U.S., already in retreat, is mainly preoccupied with itself. Meanwhile, China is taking a tougher stance and is driving its global agenda forward with determination. This has brought home all the more clearly the fact that Europe must become more resilient and that it urgently requires a clear compass, also in terms of its approach to China.

The EU’s relations with China are complicated. China is both an important partner and an economic competitor. The country is the European Union’s second-largest trading partner for goods while the EU is at the top of the tree as far as China is concerned. Our economies are interconnected, and cooperating with one another is in our mutual interest. We can only be successful together with China, particularly when it comes to global issues such as combating epidemics, fighting climate change and resolving regional conflicts.

Michael Roth, born in 1970, has been a state minister in Germany's Foreign Ministry since 2013 and is responsible for European issues. He has been a member of German parliament since 1998. Last year, he campaigned to become co-leader of Germany's Social Democratic Party. While he wasn't chosen, he is a member of the party's executive committee.

China is also a systemic rival, however, and it is increasingly going on the offensive, also vis-à-vis Europe. Beijing’s "mask diplomacy” coupled with a disinformation campaign in the midst of the coronavirus crisis is just one current example. The leadership of the authoritarian, one-party state passes up no opportunity to drive a wedge between the EU member states and weaken them. We are locked in a tough competition of values stemming from very different concepts of society.

In Hong Kong, China is currently showing how uncompromisingly it is prepared to assert its claim to power. Beijing’s actions with regard to its territorial claims in the South China Sea as well as serious human rights violations in the province of Xinjiang fit seamlessly into this picture. China is therefore not afraid to violate central principles of the rules-based international order before the eyes of the world.

What can the EU do to ensure it does not find itself paralyzed like the proverbial rabbit when faced with an apparently ever more powerful snake? One thing is clear: We urgently need more European action in our dealings with China. A consistent "Team Europe policy” is long overdue. This is a priority of Germany’s presidency of the Council of the European Union, during which we bear a particular responsibility. The EU must act more confidently vis-à-vis China and speak with one voice. We will not bring our influence to bear in Beijing if we are not united and if we do not stand up for our values and interests with the combined strength of the EU.

In Hong Kong, China is currently showing how uncompromisingly it is prepared to assert its claim to power.

Lack of unity is our Achilles’ heel. The EU must not allow itself to be divided. We must move away from the bilateralization of relations that Beijing is deliberately pursuing. Around 80 different dialogue formats are taking place between Germany and China alone. The aim must be to further strengthen exchange at European level. Notwithstanding all legitimate individual national interests, the EU is the decisive framework for action and the essential guidepost for us. After all, not a single country in Europe is capable of permanently standing up for its interests and values vis-à-vis China on its own.

The EU must stand for more in the world than just the lowest common denominator of its members. This is why Germany’s presidency of the Council of the European Union is also committed to qualified majority decision-making in the EU’s common foreign and security policy. Unfortunately, we are also seeing that the lure of doing business with China sometimes challenges Europe’s foundation of values. It compromises our credibility and weakens us all if individual members are prepared to undermine European human rights policy for the sake of a supposedly lucrative bilateral "deal” with China.

Therefore, as part of our Team Europe policy, we must leave no doubt that our fundamental values are not up for discussion as far as we Europeans are concerned. This is, after all, the essence of our community of values, our European DNA.

Not a single country in Europe is capable of permanently standing up for its interests and values vis-à-vis China on its own.

It is our common foundation of values that makes the EU so unique and precious. However, we must also be prepared to defend our values with determination. The coronavirus crisis has been a wake-up call. The pandemic has been a painful reminder to us of how dependent Europe has become in certain areas. With protective masks, protective clothing and antibiotics, a great deal is now produced in China. And Beijing in particular is using economic dependencies as leverage in power politics. Greater European sovereignty is therefore the order of the day. We must strengthen our health-care systems, diversify our supply chains and minimize dependencies in particularly critical areas.

We need to encourage greater domestic production of essential goods such as protective equipment and medicines. Europe must also become more independent in terms of logistics, energy and natural resources.

A more strategic industrial policy, large-scale investment in research and development and a digital single market are the pillars of a future-proof European home. As far as the global race for technological supremacy is concerned, China and the U.S. are currently setting the pace. However, we must strive to master key technologies ourselves and to hold the patents to such technologies in Europe. The EU must remain the engine of innovation - only then will it continue to stand on its own two feet in the future.

This is already very clearly evidenced today by the example of the 5G mobile communications standard, the backbone of our digital future. This is primarily a question of the dependence on and trustworthiness of manufacturers from third countries, including China. Nothing less than the security of our citizens is at stake here. The 5G issue is thus also becoming a litmus test for the objective of greater European sovereignty. It would therefore only be logical to lean first and foremost on our domestic suppliers. European alternatives are available and are world leaders in the field of technology.

The 5G issue is thus also becoming a litmus test for the objective of greater European sovereignty.

On the other hand, "decoupling” as far as possible from China, as the U.S. has in mind, is not an option for the EU. The coronavirus and the major powers are changing globalization, but they are not abolishing it. There will be no escaping China in the post-coronavirus world, both politically and economically speaking. Cooperation is both a necessity and an opportunity. In our direct dealings with Beijing, we can and must clearly and unambiguously articulate our interests and cultivate robust cooperation with a view to solving common problems.

Depending on how the situation develops with respect to the coronavirus, the meeting of EU and Chinese leaders planned during Germany’s presidency is a good opportunity to do this. For example, we should place the onus on Beijing with respect to tackling the pandemic and reforming the World Trade Organization, as well as further expand our cooperation in Africa and on climate protection. The EU must insist on the principle of reciprocity with regard to transparent trade practices and economic competition on a level playing field. And when it comes to the long overdue conclusion of an ambitious investment agreement with China, we should now demand swift results.

We must not be afraid to lock horns when it comes to difficult issues such as human rights, security and technology.

We must not be afraid to lock horns when it comes to difficult issues such as human rights, security and technology. This, too, is about our own sovereignty at the end of the day. China will certainly not build one single coal-fired power station less if we remain silent when we have differences of opinion. Beijing takes the EU seriously, primarily as the world’s largest trading bloc and economic area. We should therefore use our trade policy and our single market even more effectively as a lever for defending our values and interests.

The EU has not minced its words with respect to the situation in Hong Kong. When international obligations are disregarded, when fundamental freedoms and human rights are threatened, then this concerns us all. Beijing’s actions are changing the rules of the game and are having a tangible impact on our relations. The EU has now adopted a comprehensive package of measures as part of a common response. This includes further restrictions on exports of goods related to security, simplified entry and residence regulations for Hong Kong citizens and targeted support for civil society.

Moreover, after close consultation with the EU member states, Germany has decided to suspend its extradition agreement with Hong Kong. The message to Beijing is crystal-clear, namely there will be no "business as usual” as far as the EU is concerned. Hong Kong will also be the acid test for China’s credibility as a reliable international partner.

We should use our trade policy and our single market even more effectively as a lever for defending our values and interests.

You do not have to be a soothsayer to tell that, in the face of highly volatile geopolitical conditions, the post-coronavirus world will be an uncomfortable one. The fact that the major powers China and the U.S. are continuing to escalate the situation does not bode well. How we position ourselves now for the future and rebuild and reconstruct Europe will determine how successfully the EU can defend and assert its interests and values on the world stage. The EU sent a powerful signal for a new beginning at the July summit in what was an unprecedented show of strength.

With the largest multi-annual financial framework in its history and further coronavirus aid totaling 750 billion euros, the EU is now setting the course for the European future. A Chinese proverb tells us that "it is better to be envied than pitied." A strong and sovereign Europe in a spirit of solidarity that protects its citizens and stands up as one and with determination for its values and interests in the world is a form of life insurance to be envied. This is a question of sovereignty, both vis-à-vis China and others. The good news is that we are in the driver's seat here. 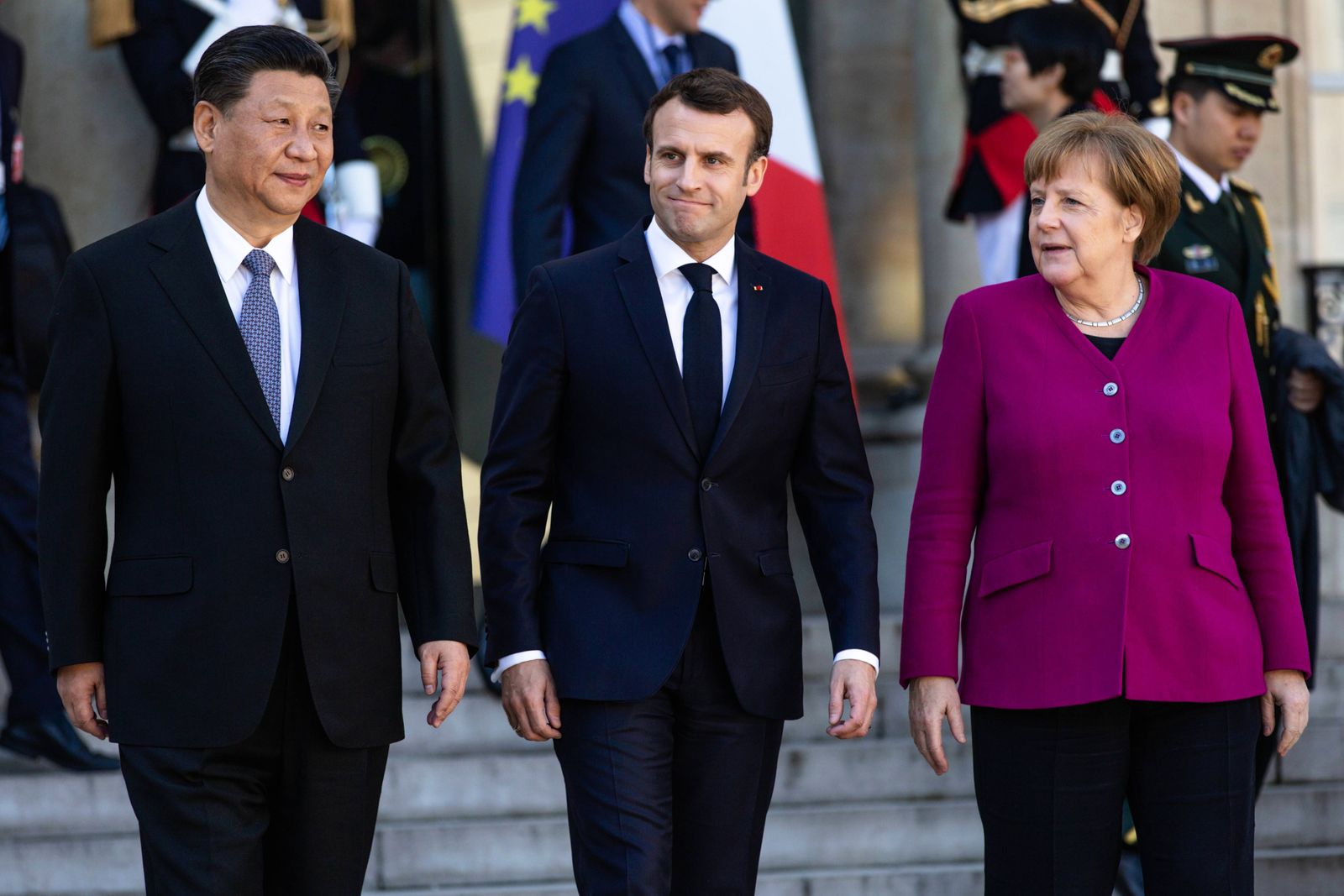