British Tory party politician David Davis, 70, served as the newly created secretary of state for exiting the European Union from 2016 to 2018. He resigned from that position in July because he rejected Prime Minister Theresa May's efforts to secure a so-called "soft" Brexit. If May fails to secure parliamentary approval for the Brexit deal she secured with the EU during a vote next week, it's possible she will have to resign. If that happens, Davis is considered a favorite for succeeding her at 10 Downing Street.

DER SPIEGEL interviewed Davis in the run-up to the meaningful vote.

DER SPIEGEL: Has the prime minister already invited you to a private conversation in order to win you over?

Davis: No, I think she realizes she wouldn't get very far. No. 10 don't waste their time on futile exercises. They know my view. It's very firm. They're not going to change it.

DER SPIEGEL: Is there anything she could offer to convince you of her plans?

Davis: A complete change of negotiating strategy (laughs). The deal that is proposed will fail next week, and it will fail when they bring it back two or three times, even if there are some cosmetic changes. It will not happen.

DER SPIEGEL: Why is the prime minister's deal so bad in your point of view?

Davis: Well, firstly, because it basically sets out to break up the United Kingdom. It would separate the province of Northern Ireland from the rest of the United Kingdom, something we as the Conservative and Unionist Party have always set our face against.

DER SPIEGEL: But Northern Ireland has already been constitutionally different from the rest of the United Kingdom since the peace agreement of 1998, anyway.

Davis: Only where it chooses to be, not by imposition. The simple truth is that Good Friday Agreement requires the approval of both communities, Protestant and Catholic, for any constitutional change. And that hasn't been sought in this context. Secondly, the negotiated deal allows the European Union to keep us in the customs union for as long as it wishes. The agreement gives the entire negotiating leverage over to the other side. I would be very surprised if pressure didn't come on in the next phase of the negotiation to enforce compliance with EU regulations. The prime minister already telegraphed that we were willing to concede that. Well, I'm not. It's not for the EU to tell us what to do.

DER SPIEGEL: The truth is that there's no majority for any other deal in parliament. What's the way out?

Davis: Through two major acts in parliament, we made sure that in the event of no deal, we will leave anyway.

DER SPIEGEL: That would mean crashing out of the EU without a deal. You are a prominent advocate for a no-deal scenario. Is it that what you want?

Davis: No, that's not true. I'm not an advocate for no deal. What I've said is that we should not be afraid of no deal. It's not the best option by a long margin. It's not the best option for us. It's very much not the best option for a number of European countries, including Germany. But in any negotiation, you always have to have a walk-away option. When you go buy a car or buy a house or buy a piece of land, you've got to have the option of not buying it. Otherwise, the price becomes ridiculous. That's what has happened here. The price for Britain has become ridiculous. Therefore, we should go back and renegotiate properly this time.

DER SPIEGEL: What makes you think that the EU would agree to a whole set of new negotiations at the eleventh hour?

Davis: Well, if it doesn't, we leave. There is no reason to be afraid.

DER SPIEGEL: But isn't there? The government has spent millions of taxpayers' money on contingency plans. It wants to erect hangar spaces to stockpile food supplies and it plans to deploy tens of thousands of soldiers in order to secure public order in the event of a no deal. The Bank of England, the industry association CBI and almost all experts are predicting catastrophic economic losses.

Davis: Those are mostly scare stories. Firstly, we are not talking about soldiers on the streets. They would be needed for planning, logistics, transport and other things if necessary. I would lay good money that it would not be necessary.

DER SPIEGEL: What about the other predictions?

Davis: The Bank of England forecast was ridiculous. It was actually attacked by a remainer ex-member of the Monetary Policy Council as destroying the reputation of the bank. The bank made similarly ridiculous forecasts before the referendum campaign. But what happened in the last two years? It was completely, utterly and totally wrong. There have been a number of other assertions -- for example, that we'll all run out of insulin. Well, we checked that when I was in government. And we're not going to run out of insulin, no chance whatsoever. That we're going to have food shortages. No, we're not. And it is also unlikely that (the ferry traffic between) Calais and Dover will choke up.

DER SPIEGEL: The government has just rehearsed for a traffic chaos around Dover harbor.

Davis: Yes, but the head of French customs has already said they could change the inspection regime to make sure that business runs smoothly. And, if not, we can move 40 percent of the trade from Dover-Calais to other ports. So, the practical concern we're talking about here is real, but it is limited. There may well be lorry queues. I don't know, we may even see some hostile action by European states. But within a year, everything will be ironed out, whatever there will be. Your own David Folkerts-Landau, chief economist of Deutsche Bank, says that "the UK has the flexibility, it has it in its genes to do well."

DER SPIEGEL: If all these are scare stories, why did your own department, when you were a secretary of state, draft three different scenarios, one of which they call the "Armageddon" scenario?

Davis: They never called it the "Armageddon" scenario to me, not in a single document I've ever seen.

DER SPIEGEL: But it was a very bleak outlook.

Davis: What we are talking about in this case is a hostile no-deal outcome, with no arrangements for the practical things. People talking about aircraft being grounded. Really? Really? You don't want to go to America ever again? You want to fly around Britain when you're doing it? Oh, come on. That won't happen.

DER SPIEGEL: Hostility could easily come up if Britain, for instance, refuses to pay the exit bill of 40 billion euros.

Davis: Well, exactly, that's the point. It's not likely to happen because it's a symmetrical risk. The risk goes both ways. I don't think the EU wants to lose this money.

DER SPIEGEL: You were "Mr. Brexit." Do you see reason for self-criticism?

Davis: Always. I didn't win the argument, so it's at least in part my fault.

DER SPIEGEL: Was it wise to resign in the middle of the greatest chaos?

Davis: Yes, oh yes. When I realized that the prime minister is about to hand away the control of our own future, our independent nationhood, I couldn't go on. I knew if I stayed a lot of people would have said: David is going along, we can trust David, so we will live with it. That is not what I wanted.

DER SPIEGEL: In the meantime, the majority of British people now think that Brexit was a bad idea. Why not give them a second vote?

Davis: Do you know how many polls were right before the referendum? None, and I made 1,000 pounds profit on the day of the referendum because I saw all these polls and I put a 200-pound bet on Leave. The odds were 5 to 1. But I got my money back

DER SPIEGEL: A lot has happened since.

Davis: I represent a constituency out in the provinces, if you like. And I can't see that people are fed up with Brexit. If anything, the direction of travel is from remain to leave, not the other way around.

DER SPIEGEL: Would you ever favor a second referendum?

David: No, no, no. We've had the referendum and the outcome was clear.

DER SPIEGEL: Your party is holding the nation hostage over its unresolved struggle over Europe. Where has all the reason and willingness to compromise gone?

Davis: You think it's just the Conservative Party? Where is the willingness to compromise in the European Commission or in Germany? It's regrettable that we have come to this point. Our negotiation strategy was initially to try and get a win-win out of this. The EU was determined for it not to be a win on our side. Indeed, Mrs. Merkel, I think, said in terms Britain cannot be seen to gain from this.

DER SPIEGEL: But it is the Tory party where the infighting is so brutal, with colleagues calling each other extremists.

Davis: Our politics is verbally fiercer than that of most chambers in Europe. We fight fiercely in the debate and then we are friends afterward. That's how our view of democracy is.

DER SPIEGEL: Brexit seems to be turning Britain into a more narrow-minded, xenophobic and divided society. Is that a price worth paying?

Davis: That's the view of a remainer. It's true, though, that the debate has become more corrosive. Part of the reason is because it is so important. This happens in British history. It happened over Suez when there was a fierce debate, and it happened when Margaret Thatcher was prime minister. But then it always settled back down

DER SPIEGEL: Is Theresa May the right person to reconcile the party and the country?

Davis: Yeah, yeah. Since I stood down, I have always said change the policy not the person. I think she's a good prime minister. We have a big difference on the biggest issue of the day. But she has been very strong, very brave through some pretty trying times.

The article you are reading originally appeared in German in issue 3/2019 (January 12th, 2019) of DER SPIEGEL.

DER SPIEGEL: Will you stand ready to replace her when the time comes?

Davis: That is not going to happen. She won a vote of confidence before Christmas and that means there can't be a leadership contest for another year.

DER SPIEGEL: Do you not worry that future generations could hold you responsible for what may prove to be one of the biggest mistakes in British history? 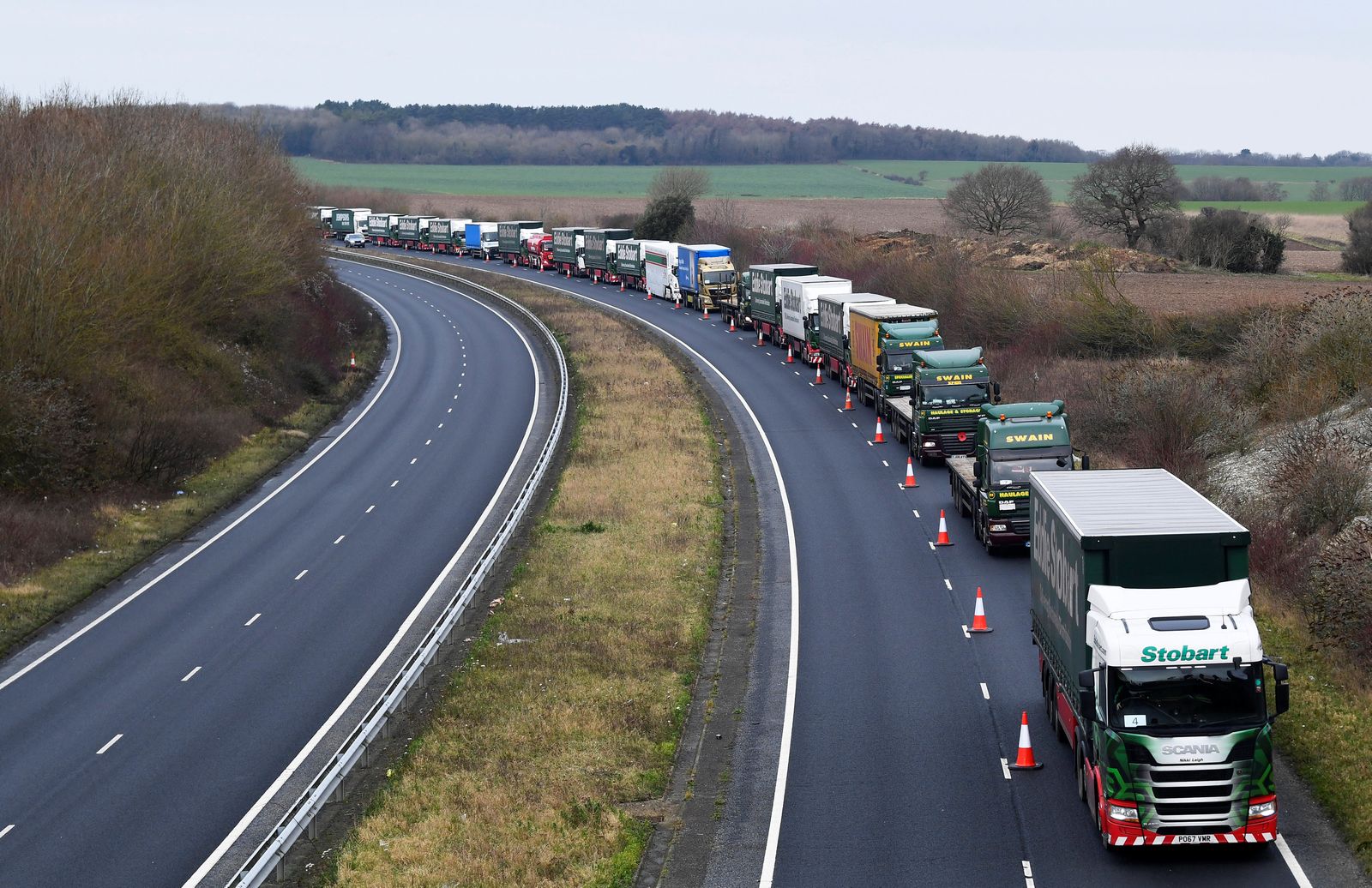 A line of trucks participate in a trial run to test how Britain will cope with a "no-deal" Brexit scenario. 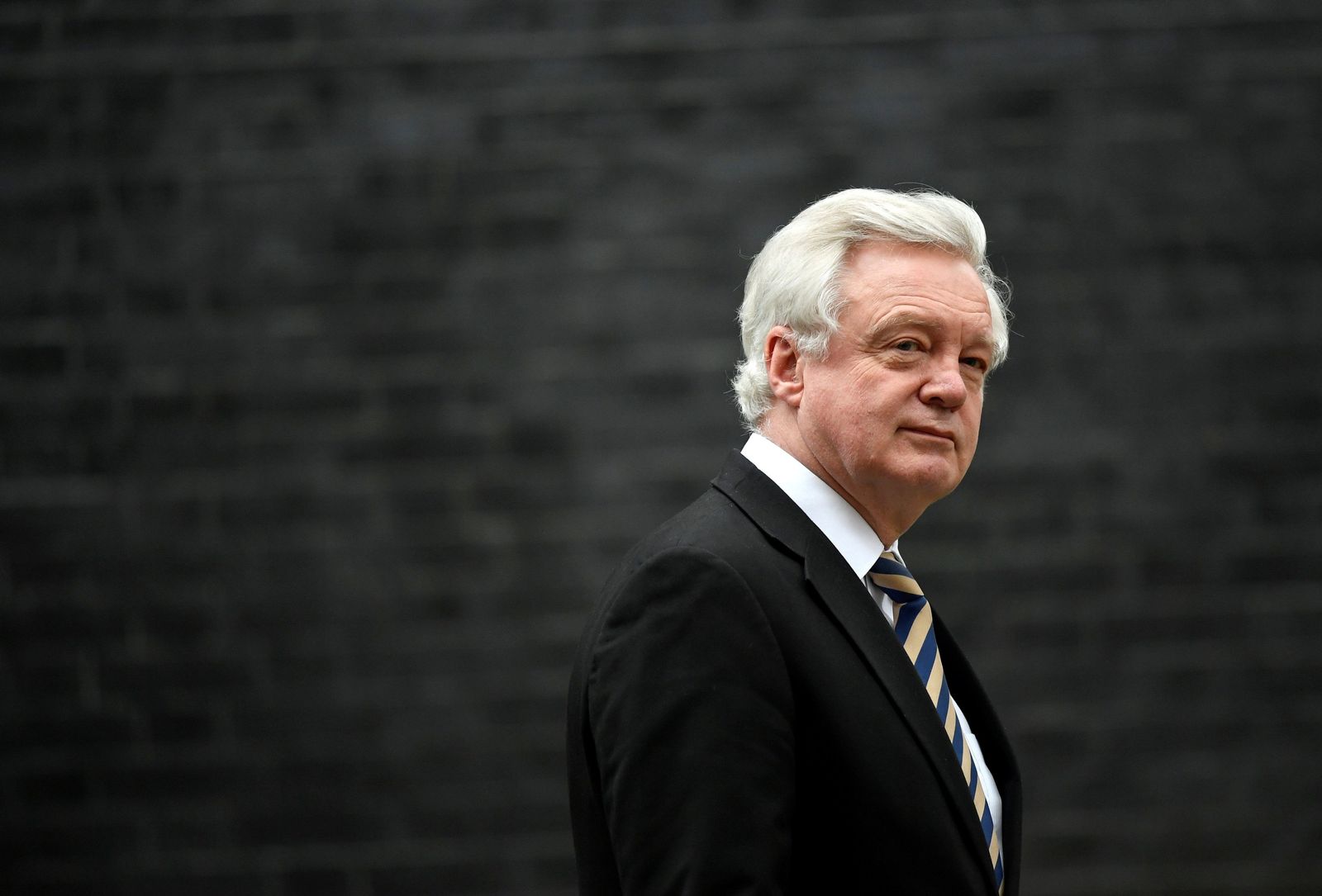 Former British Secretary of State for Exiting the European Union David Davis: "Within a year, everything will be ironed out, whatever there will be."