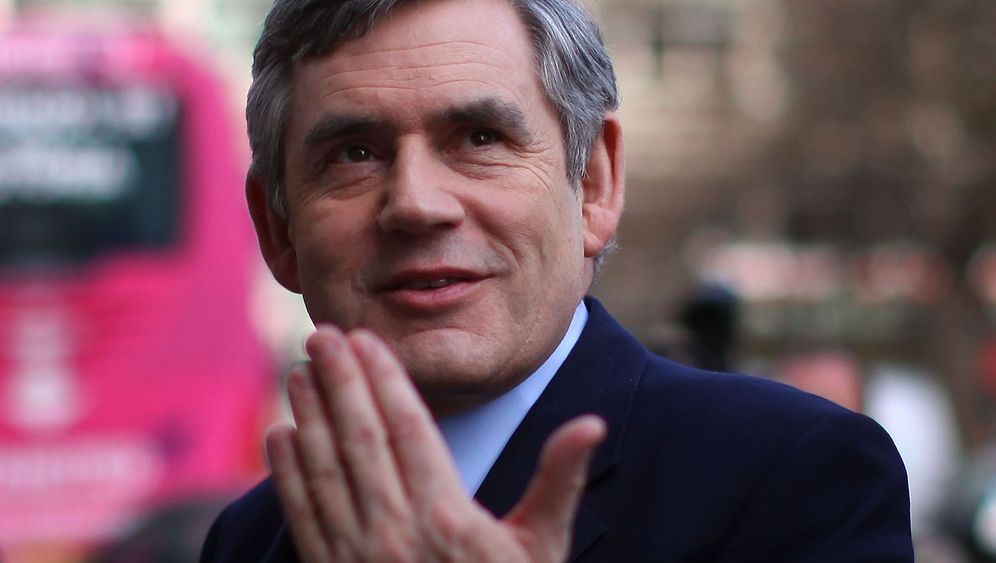 SPIEGEL: Mr. Brown, early one morning at the height of the banking crisis, you told your wife Sarah to get ready to move out of Downing Street as you might resign that afternoon. How did she react?

Brown: Very professionally. She got on with the preparations. Of course, she couldn't call in the movers just yet. That would have been a bit too disastrous of a signal to the markets.

SPIEGEL: We're talking about Wednesday, Oct. 8, 2008. Lehman Brothers had just filed for bankruptcy. In your new book "Beyond the Crash," you write: "I sensed that if no one acted, total collapse was imminent." What exactly were you expecting?

Brown: The Royal Bank of Scotland would have collapsed within hours. HBOS was not far behind, and in that case, other European and American banks would have followed. I think people still misunderstand, in retrospect, the scale of the collapse that we were facing: It would have been absolutely catastrophic.

SPIEGEL: Would the ATM's have stopped handing out money?

Brown: Most likely. People would have been in panic about their savings, there would have been a run on the banks. But what worried me most was: At this moment there was a total lack of leadership about the way forward, both within banks and governments. The banks still deceived themselves. One banker told me on the day before his bank collapsed: "All we need is overnight funds." He didn't even realize that his institution was virtually on the brink.

SPIEGEL: That morning, you announced the immediate recapitalization of the British banks using billions of pounds in public funds, and which basically meant nationalization. Today, you receive a lot of praise for the steps you took. But how did you know then that it would work?

Brown: I didn't. To be honest, it was a gamble. No other country had done it before. I would have resigned that day if it failed. But it worked. Within days, most large economies followed our path.

SPIEGEL: At around the same time, German Finance Minister Peer Steinbrück was still in denial, blaming the problem entirely on Anglo-American banking practices.

Brown: What really sparked the whole thing was the subprime crisis in America. But what people hadn't yet realized was that half the subprimes had been sold into European banks. The banks were undercapitalized, and they had a lot of impaired assets on their balance sheets.

SPIEGEL: Were you in close contact with German Chancellor Angela Merkel at the time?

Brown: On a regular basis. She knew exactly what I was thinking. But our decision on Oct. 8th may have nevertheless surprised her.

SPIEGEL: It was quite a risk.

Brown: We could not be clear how the markets would react and what other governments would do. If nobody would have supported our course of action, then I think it would have been pretty difficult for Britain. But people had realized that the American TARP scheme was not going to work. In that scheme the state would take over the impaired assets. But it didn't deal with the problem that banks were themselves undercapitalized. Our plan was better.

SPIEGEL: In the summer prior to the Lehman collapse, you had read several books about the Great Depression. Did that prepare you?

Brown: It did. I knew that monetary and fiscal policy had to work together. Our course led to printing money obviously, but at the same time to the biggest fiscal injection that the world has ever seen. And the whole thing had to be coordinated internationally, the first time that had happened on such a scale.

SPIEGEL: Critics argue that you not only helped solve the crisis, but that you also had a hand in creating it in the first place. In 2005, as Chancellor of the Exchequer, you told managers that government should not only "have a light touch, but a limited touch" in banking regulation.

Brown: You've got to understand the atmosphere in Britain at the time. We had introduced the Financial Services Authority and had removed the system of self regulation in the City. We had merged all the different supervisory organizations ...

SPIEGEL: ... but the result was an extreme dearth of regulation. There is a reason that Lehman Brothers did much of its business in London.

Brown: Lehman Brothers failed to declare its financial position. You cannot blame the regulator for not picking up something when there was a failure to declare. In the end, it wouldn't have mattered whether regulation was a little stronger or a little weaker. What we hadn't factored in was the interdependence between the different financial institutions. What happens to one bank has implications for a lot of others.

SPIEGEL: Regulators in Canada, Australia and Sweden have obviously done a better job. Banking systems in those countries weren't hit nearly as hard. Do you not see any errors at all in hindsight?

Brown: I wish that we had had a better understanding. We did a trans-Atlantic simulation exercise in early 2007 which included US Secretary of the Treasury Hank Paulson and Chairman of the Federal Reserve Ben Bernanke. We looked at what would happen if an individual institution collapsed. People realized that there were consequences that went beyond that individual institution. But we didn't analyze what would happen to the system in its entirety, due to connections and entanglements. We should have built a global control system for the financial sector much earlier.

SPIEGEL: Both Germany and the European Union had tried to adopt tougher regulations long before the crisis. But London always stood in the way.

Brown: That's a misunderstanding. I was always in favor of intervention but wanted to do it on a global level. If you regulate in Europe, but not in America or Hong Kong, Singapore or Switzerland, banks will be basing more of their operations abroad. You need a global system, and that is now recognized. But I see the problem that we're not yet implementing rules at a global level that cover all the major financial centers.

SPIEGEL: There will always be someone who doesn't play by the rules. Isn't the call for global supervision just a lazy excuse for doing nothing?

Brown: When we introduces the savings income tax, we were successful. If we had only done that in Europe, other countries would have taken advantage. Now there is an exchange of information with countries like the US, Switzerland and Liechtenstein. If financial centers escape supervision, this undermines the whole system.

SPIEGEL: Good intentions regarding improved regulation were plentiful after the Asian crisis 10 years ago.

Brown: At that time, I was proposing an early warning system for the global economy. I made very specific proposals for improving transparency in the financial system and to make supervision more international.

SPIEGEL: The outcome could certainly be the same this time around: A lot of talk but no real consequences.

Brown: Of course, that's the biggest danger now because complacency develops. We seem to return to a cycle where people move from excessive fear to irrational exuberance.

SPIEGEL: The price for bailing out the banks was extremely high in many countries. You yourself were voted out of office and you have left a huge deficit to your successor.

Brown: Deficits are the inevitable product of dealing with a recession. Because the financial sector in our country is so much bigger than in other countries, we had bigger losses in our revenues. To blame it on our fiscal policy is not justified. We simply took the measures that were necessary to move the country out of recession.

SPIEGEL: Yet the British economy is shrinking once again.

Brown: People have taken their eye off the ball in terms of making sure that the economy can grow.

SPIEGEL: Do you feel you've been cheated by the bankers?

Brown: In our families and in community life, we expect certain standards: trustworthiness, integrity, that people do things responsibly and don't take reckless risks. As we know now, bankers were operating on a different set of standards. Somehow the global financial giants exempted themselves from the moral conduct that we would expect from other institutions. And that's the problem.

Brown: Not if they come at the cost of the stability of the bank. If top bankers in this country had paid themselves 10 percent less for the past 10 years, they would have amassed an extra £50 billion -- exactly the amount of money we had to spend on recapitalizing the banks.

SPIEGEL: Do you think an additional banking tax would add stability to the system?

Brown: I think so. We certainly can't continue with a situation where the financial system poses such risks to the world economy and to individual livelihoods and doesn't even pay for that risk. The taxpayer has got to be not just compensated, but protected in the future. There could be an agreement between Germany, France, Britain and America on a global banking levy. Other financial centers could join later.

SPIEGEL: Surely that is wishful thinking.

Brown: It's a question of leadership. There's no reason why Germany, France, Britain and America couldn't agree to that. Congress has been debating a revenue tax. The G-20 is chaired by President Sarkozy. There's Angela Merkel who's proven to be a person who can win people's support for big issues. But we need more than that. We need global financial supervision.

SPIEGEL: That's even harder to achieve.

Brown: Yes, but on the other hand, everybody now knows that banks can impose huge costs on your country. To get on top of these risks, we need to move ahead. It's not enough to discuss the future of banks at a national level. If you have a German solution, a British solution and an American one, you could get three separate sets of regulations and it would mean that the banks could look at the different countries and decide which operations to locate in each country.

SPIEGEL: Isn't that what globalization is about?

Brown: We're at a huge transition phase in our history. During industrialization, we saw that local institutions had to be replaced by national ones. Now, globalization is challenging our national institutions to move up to bigger ones. We're finding that the national framework is insufficient. We've got to think and act globally. If we don't do that, we won't solve the banking problem, nor will we solve the environmental problem or the terrorist problem.

SPIEGEL: Mr. Brown, thank you very much for this interview.