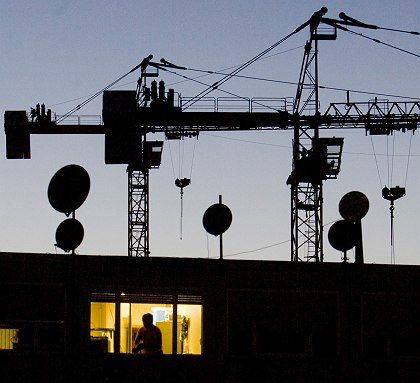 The European Commission recently got a message from Berlin: Unfortunately Germany is currently experiencing a "serious disturbance" in its labor market -- which has made it necessary to keep its borders shut to Eastern European workers until 2011, German Labor Minister Olaf Scholz told the European Union's executive body in Brussels at the start of May.

His brief message made one point clear: Germany was making the most of the transition rules of Eastern European expansion. Aside from Austria, Germany is the only country which has kept its borders closed to Eastern Europeans.

But Scholz's decision has sparked mounting criticism. Economic experts say his controls on freedom of movement are a big mistake. Germany's restrictive immigration policies could turn it into a loser of the EU's recent expansion, the leader of the German Institute for Economic Research (DIW), Klaus Zimmermann, said on Wednesday.

Zimmermann and experts from the Institute for the Study of Labor (IZA) conducted research into migrant labor during the first five years following the 2004 expansion of the EU to include 10 new largely Eastern European member states. Romania and Bulgaria joined in 2007. A report released by the two organizations on Wednesday concludes that "countries which opened their borders early on have profited most."

The positive impacts were most striking in England and Ireland: "Migrants from Eastern Europe are to a large degree prepared to take on jobs and they often fulfill the requirements of the local job market."

The background to the discussion is freedom of movement for workers in the bloc. In principle, every EU citizen is allowed to work in any other member country. However, following the eastern expansion, a number of countries sought exceptions to the rule, fearful of wage dumping and increased competition in the labor markets. They obtained the right to tighten their borders with Eastern Europe until 2011 at the latest, preventing the inflow of workers from countries that joined the EU in 2004. That affects people from Poland, Hungary, the Baltic States, the Czech Republic, Slovenia, and Slovakia. Restrictions are also applied to Romanians and Bulgarians.

But DIW chief Zimmermann said the countries' fears had not been borne out by reality. "There is no evidence that migrants from the new EU states have displaced local workers, nor have they exerted pressure on earnings, or become more dependent on state aid (like unemployment or welfare benefits) than local workers," he said.

Graphic: Limits on Labor Movement in the EU

And while other EU countries are more accessible for foreign workers from the east, Germany's eastern borders remain sealed -- a missed opportunity in Zimmermann's view. Because of the restrictions imposed by Europe's largest economy, he argues, highly qualified workers are making a beeline for England and Ireland instead of seeking opportunities in Germany.

Moreover, the government in Berlin has deliberately prevented Germany from forging a reputation as a "country of immigration," the report claims. "Now a clear signal needs to be sent, showing that foreign qualified workers are wanted here and urgently," said Zimmermann.

He said the appeal is necessary, even in this time of economic crisis: A shortage of workers in Germany is already taking shape, he said, and it can only be remedied by an increase in immigration. The researchers view delays in the opening of Germany's borders because of the crisis as "short-sighted."

Herbert Brücker of the Institute for Employment Research (IAB) in Nuremburg supports the DIW's position. "In the long-term Germany is losing out because it is not adopting freedom of movement rules for workers, even when, in the short-term, there may be a slight increase in the number of unemployed," he said. The border controls should have been relaxed in 2005 or 2006, he said: "The coalition government (of Chancellor Angela Merkel's conservative Christian Democrats and the center-left Social Democratic Party) already missed that chance."

Labor Minister Scholz has defended himself against the stream of criticism. At a conference organized by DIW in Berlin, the Social Democrat argued that since the start of the year academics, including Eastern Europeans, have enjoyed complete freedom of movement within the EU. "Since the start of this year, Germany has had the most open labor market for academics in the entire world," Scholz said, stressing it was already possible to lure qualified workers to Germany.

He argued that German businesses needed improved training programs. Instead of encouraging foreign workers to come to Germany, he argued, the country should improve the training given to young Germans, arguing that young people with an immigrant background need to be better integrated into the job market.

But DIW head Zimmermann responded skeptically, instead pleading for a greater opening of the country's labor market. He said Germany would not be able to create the number of trainee positions necessary to cover its labor market requirements.