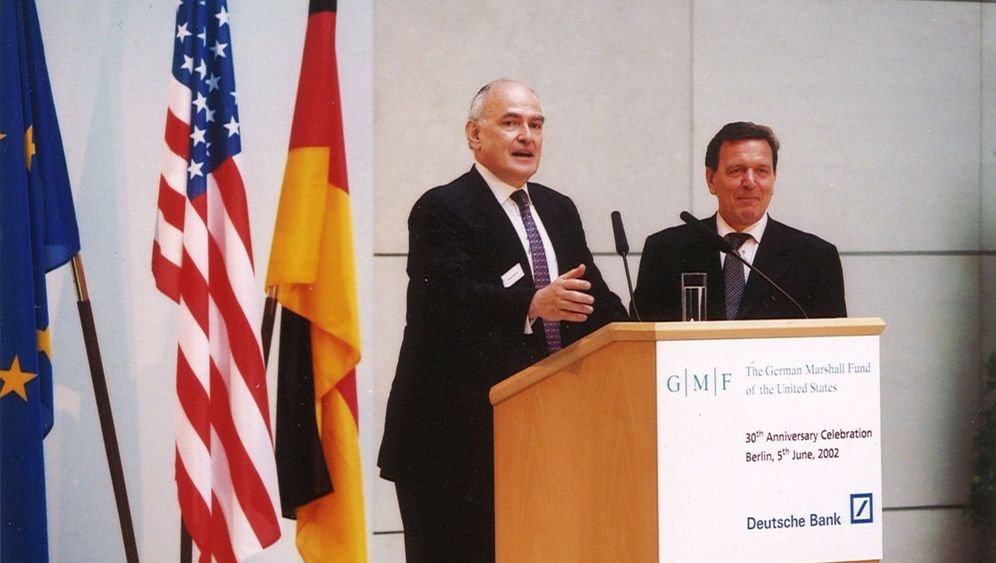 It had an unlikely beginning from an even unlikelier founder. In 1971 Guido Goldman, who came to the United States as a young Jewish war refugee, started lobbying the West German government. Goldman, then 33, wanted money for a fund to improve US-West German relations. Just a year later the Bonn government unanimously agreed to his plan.

The German Marshall Fund was born.

As the Fund celebrates its 40th birthday on June 5, much has changed in the world, but the fund's goals remain the same, as its mission statement reads: To promote a "better understanding between North America and Europe on trans-Atlantic and global issues."

Goldman, who has been convinced for decades that Europe is America's most important ally in the world, says the need for the Fund is as great as ever.

"There are still lots of opportunities to misunderstand each other," something he says neither side can afford right now, Goldman told SPIEGEL ONLINE. The US may have shifted focus to Asia and Latin America, but "I keep reminding people that Germany, as the leading power in Europe, is still the most important partner for the US." On the eve of his retirement, Goldman points out that Europe is ahead of other regions in terms of trade flows and travel with the US.

Goldman, now, 74 is "one of the great post war bridge builders in European and US relations and has played a huge role in trans-Atlantic relations," says Karl Kaiser, an academic and German government advisor who met Goldman at Harvard in 1964. "Today we don't talk about it and we take it for granted." But at the time that Goldman created the Fund, the importance of building these sorts of relationships "was not so clear," he says.

Goldman's precocious career is the by-product of his upbringing. His father Nahum Goldmann, born in what is now Belarus and raised in Germany, founded the World Jewish Congress and negotiated post-war repatriation settlements for Jewish survivors in Europe. His mother was from Berlin. Born in Switzerland, Guido Goldman moved with his parents and younger brother to New York in 1940 as refugees fleeing the war.

Growing up, luminaries such as former German Chancellor Konrad Adenauer and presidential advisor and financier Bernard Baruch were frequent guests at his home on Central Park West. In 1959 he went to Harvard where former National Security Advisor Zbigniew Brzezinski was one of his undergraduate tutors and Henry Kissinger one of his PhD advisors. It was then that Goldman realized having so many highly regarded Europeans in the US was a rare historical moment.

"These were all people who were born in Europe and spoke English only after learning another language," says Goldman. "It was a one-time phenomena to have all of these prominent people in the US because of Hitler and Stalin. After they retired, what would happen?"

So when funding was about to run out for Harvard's West European studies program, where he was executive director, Goldman decided to approach the West German government for support. He pitched to West German Finance Minister Alex Möller, whom he knew through his father's connections, the idea of giving Harvard a gift on the 25th anniversary of the Marshall Plan.

Möller agreed, getting German politicians to agree on donating 150 million deutsche marks over the next 15 years on the condition that Goldman would create a stand-alone institution to promote European and US relations.

On June 5, 1972 German Chancellor Willy Brandt, a member of the center-left Social Democratic Party, officially announced the creation of the German Marshall Fund, saying in a speech at Harvard that he hoped it would help "Europe grow into an equal partner with whom (the United States) can share the burden of responsibility for world affairs."

Constanze Stelzenmüller, senior trans-Atlantic fellow at the Fund's Berlin office, is impressed by Goldman's dedication to building connections between the two countries, given his background as a Jewish war refugee. She first met Goldman in 1986 while she was on a fellowship he created to bring Germans to Harvard's Kennedy School. Having grown up in post-war Germany, she says she can fully understand Jewish people who do not have warm feelings toward Germany.

"I would have perfect sympathy for anyone who said it was too fresh, particularly someone in the survivor generation, who says 'there is no bridge between you and me,' says Stelzenmüller."Guido was someone who said, 'this is the reason why there needs to be a bridge.'"

While the Fund plays a "decisive role" in helping to shape thinking on numerous economic, political and cultural topics, Michael Naumann believes that Goldman pushed for its creation "out of emotional reasons, for the friendship he felt for the Germans."

Naumann, a German academic whose career has spanned journalism and politics, got to know Goldman personally through his wife. He admits that though it is "very hard to assess the intellectual work of think tanks," the Fund has been instrumental in creating networks of people on both sides of the Atlantic.

Goldman handpicked an initial board of leading policy makers, academics and corporate titans to win acceptance from US leaders and then went about creating the Fund's mission. The Fund began during the height of the Cold War when the focus of most organizations was on defense and security. "The whole post war relationship was very much dominated by the military confrontation between East and West that was taking place on German soil," says German government advisor Kaiser.

So Goldman decided to take a different approach. "We wanted to do something new and get different kinds of people involved in trans-Atlantic issues," says Goldman. "We wanted to make Americans aware that we belong in Europe and focus on problems important for German people in the US." For him that meant putting resources into bringing experts together on issues like urban transportation, the environment and economics.

One early project took officials from Alexandria and Arlington, Virginia to Holland and Sweden so they could learn how to improve Washington D.C.'s metro system. Another sent representatives from an Alabama company to Berlin to improve trash collection and recycling systems.

The approach drew some initial criticism from German politicians who worried that their gift was being misused. "We got a letter from a CDU (the conservative Christian Democratic Union) politician who said, "you use the great name of Marshall and then you start with garbage." Still in 1986 West German Chancellor Helmut Kohl, also from the CDU, renewed the Fund's grant for another 10 years.

These so called "soft power" issues are now seen as having strategic long-term importance, says Naumann. These exchanges sustain environmental, economic and defense treaties like NATO and they will help to create new agreements on issues like copyright law, he says.

It was a forward thinking approach, says Stelzenmüller. "We are at a point now where our values and interests overlap on so much more than security policy," she says. "No one thought that globalization would happen in this way."

The focus on soft power took on greater significance after the fall of the Berlin Wall in 1989. By 1990 the Fund established an office just outside the Brandenburg Gate eventually moving their West German, Bonn office there. Within months of the wall falling, Goldman drove around East Germany with colleagues to get a sense of what was needed, deciding on measures like English language classes to support the creation of a new Western-oriented civil society.

The end of the Cold War also left the trans-Atlantic relationship "waning and wanting," says Naumann. Because fewer Americans now study German, for example, there are fewer people in American decision-making circles who understand German culture and politics, he says. The two sides of the Atlantic are "simultaneously drifting apart due to lack of understanding," he says. "Just look at the recent (G-8) conference at Camp David. It was nothing more than a grill party. It had no relevance."

All the same the relationship is "as necessary as ever," says Kaiser. "There is no major global problem for which the US doesn't need a strong European partner or partners." Stelzenmüller fears the trend toward re-nationalization as countries start looking more inward. When countries "indulge in petty conflicts and cultivate distrust, it makes people less capable of empathy," which is a crucial ingredient for cooperation, she says.

Even Goldman, who is handing off the baton, worries about the ability of Europe, especially Germany, to cooperate with the US on major economic and security issues dominating the agendas of world leaders today. "We are in a precarious moment in time," says Goldman. "If we have a double- dip recession, the level of the problems will be stunning."