He had hoped, said French President Emmanuel Macron with a heavy voice last Wednesday evening, that "this dinner would take place in a cheerful context." Wearing a dark suit and a serious expression, he stood in front of a podium in the Carrousel du Louvre, an underground shopping mall near the Louvre museum.

CRIF, the umbrella association of Jewish organizations in France, had invited Macron for their annual dinner. It could have been just one event among many for the French president, whose agenda is always packed. But it didn't turn out that way. Quite the contrary.

That has to do with a situation that is anything but cheerful. Anti-Semitic attacks increased by fully 74 percent in 2018, an unfathomable spike. Last year, 541 incidents were registered, compared to 311 the previous year.

And then there are the recent events: Only a few days before the event near the Louvre, a man shouted at philosopher Alain Finkielkraut on the street, saying that he was a "filthy Jew," that he belonged to a "filthy race" and that he should "go back to Tel Aviv." The man who yelled at Finkielkraut was wearing a yellow vest.

Then a Jewish cemetery in Alsace was desecrated as was, though it wasn't yet known by the time of the dinner, another cemetery near Lyon, where someone wrote "Shoa blabla" on a memorial. Meanwhile, the portrait on the 13th Arrondissement town hall of Simone Veil, the Holocaust survivor and former European Parliament president, was daubed with black swastikas. And someone sprayed "Jews" on the window of a bagel shop.

In his speech to the members of the Jewish organizations, Emmanuel Macron said: "For the last several years, anti-Semitism has once again been killing people in France." Then he listed, one after the other, the names of the people who had been murdered in France in recent years because they were Jewish.

Neither anti-Semitism nor anti-Semitic violence are new phenomena in France or in the rest of Europe. Both have a long history, with a few tragic nadirs: In France, these include the Dreyfus Affair in the late 19th century, the desecration of the Jewish cemetery in Carpentras in 1990, the torture-killing of Ilan Halimi in 2006 in a Parisian suburb and the murder of Mireille Knoll, an 85-year-old Holocaust survivor, about a year ago.

The current displays of anti-Semitism, though, are the crest of an almost all-encompassing wave of hatred and violence crashing over the country. Anti-Semitic attacks can be recognized for what they are; unlike other acts of violence, they can be categorized and geographically pinpointed. As such, the hatred of Jews can be identified even against the backdrop of broadly rising violence.

And here, too, there is a problem specific to France, as the terror attacks of the past few years have shown: The failed integration of younger Muslims and their increasing radicalization.

But a debate has emerged about whether the yellow vests are per se anti-Semitic, whether they are responsible for this new wave of violence. And the likely answer to that question is: They aren't any more responsible nor are they any more anti-Semitic than the rest of the French. Or, for that matter, than the Germans or the Austrians.

The so-called yellow vests, after all, are not a homogenous collection of people that fall into a specific sociological category. Rather, they are a disparate movement united by only one thing: indignation. And when indignation escalates, hate is ultimately the result.

Rising to the Surface

"I am shocked how much hatred there currently is in our country," says Denis Peschanski, a historian who researches historical commemoration. In his view, French anti-Semitism is always in the background, but in pushes its way forward in times of crisis. And it thrives, he says, in an environment where conspiracy theories are plentiful.

And this is where the yellow vests play a role, because, no matter how diverse they may be, the movement's combined force has paved the way, both verbally and physically, for these acts of violence. What is new, though, is the unrestrained nature of the hatred.

The article you are reading originally appeared in German in issue 9/2019 (February 23rd, 2019) of DER SPIEGEL.

There is a hatred of taxes and of tax increases. Hatred for the president, who some would like to see guillotined in the traffic circles in rural France where the yellow vests camp.

And then there's the lawmaker who threatened Macron by saying the president would end up like Kennedy if he didn't change his policies. We are essentially witnessing a collective breaking of taboos. "A Clockwork Orange" in French.

These newly blurred boundaries are also palpable within the yellow vest movement. After nurse Ingrid Levavasseur, a kind of figurehead for the movement, wanted to run in the European Parliament elections with her own list of candidates, she was so harshly insulted and threatened that she withdrew her candidacy. "Dirty whore!" one person yelled at her. "Go get raped!"

All constraints seem to have disappeared. Anyone can be whatever they want to be: racist, anti-Semitic, misogynist. Freedom of speech is showing its dark side.

And it isn't just insults and complaints. The Arc de Triomphe was graffitied. Someone peed on the barrier protecting the French National Assembly. Hatred of the bank on the corner leads to its windows being shattered, and the same happens to the shoe store across the street.

Peschanski, the historian, connects these transgressions to two things: the presidential election in 2017 -- which Emmanuel Macron won against all expectations, making him quasi-illegitimate in the eyes of many -- and to the populism that has become rampant across Europe.

The more powerful the populists become, the more they spread their ideas, their rhetoric, and their hate. The question is now whether the situation can be reset, and whether this spiral of physical and verbal violence can be ended.

Emmanuel Macron is trying in his own way, by travelling to remote corners of the country and talking to people, whether they are local politicians, students or retirees. He has decreed a "great debate" for the country, which sometimes seems akin to national group therapy. He listens to the complaints, takes down criticisms and then responds to them.

An Attempt at Dialogue

To those who are angry, he argues that politicians are not fundamentally corrupt. To those who are afraid, he declares that democracy can protect them. Most of the time, he cuts quite a good form at such appearances because he tends towards the pedagogical. Having spent the first year of his administration focused on establishing his authority, he is now showing his Montessori qualities.

But Macron can't be everywhere, and he has no alternative to offer the senseless, those who believe that nothing can be accomplished without violence. Many in France, including people who don't take part in the yellow vest protests, believe that these weaker elements of France never would have heard from him had the yellow vests not revolted.

This is partly Macron's fault. He didn't respond until quite late, when the violence had boiled over. Now, he is trying to calm down the situation and to pursue reconciliation.

On Wednesday evening, in his speech to CRIF, he said he wanted to punish hate more decisively. He said this push would include laws that, for example, would keep a closer eye social networks. A form of anti-hate law is to be passed banning openly racist or anti-Semitic groups like Blood & Honour Hexagone and Combat 18. Anti-Zionist views are to be considered a form of anti-Semitism, a position which Macron had resisted until recently.

When his speech ended, the audience applauded. The group's chairman, Francis Kalifat, strode on stage to thank him. First, he shook the president's hand, then suddenly took his arm, grabbed it and held it up, like a boxing champion. It was a gesture of desperation. 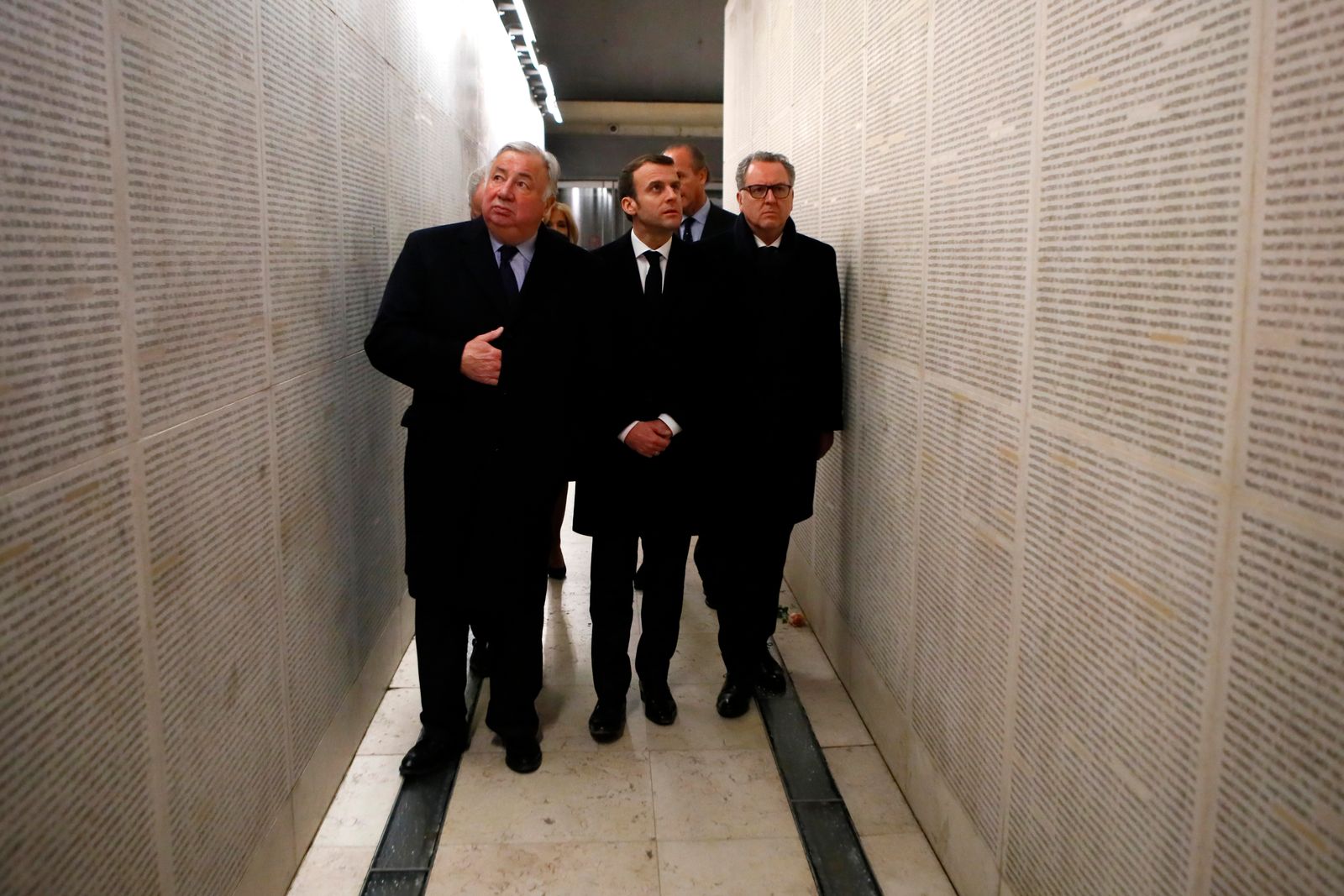