Temperatures were below freezing and the winter sky was a frosty gray when French President Nicolas Sarkozy arrived at the Notre-Dame-de-Lorette military cemetery in northern France last Tuesday. He had come to pay his last respects to another Frenchman, a man named Harouna Diop, a soldier and father of six children. Born in Senegal, Diop was only 40 years old when he died in Afghanistan on Jan. 13, when insurgents blew up his armored military vehicle. 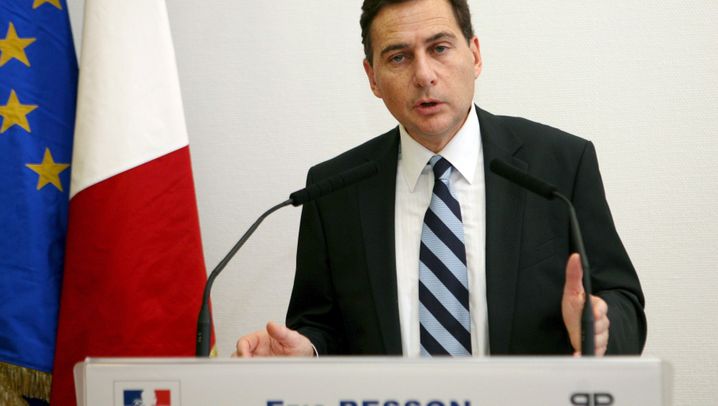 Sarkozy's eulogy was a rescue attempt, a rhetorical maneuver at the height of a heated debate being conducted in France over national identity. It has divided the country for months, has led to racist gaffes and has contributed to an atmosphere of heightened suspicion against French Muslims.

The debate revolves around the values of the republic, the French nation, the burqa and the question of what this country is proud of and what is important to it -- in short, many of the things that unite, or once united, the French.

The man who triggered this debate is standing next to Sarkozy at the military cemetery: Éric Besson, 51, minister for immigration, integration and national identity. The Nouvel Observateur calls him a "shameless servant of his master," while the weekly magazine Marianne concludes that he is "the most hated man in France." As for the president, he calls Besson "my blade."

Besson is a suave politician. He wears lilac-colored shirts with purple ties, has a habit of pressing the fingertips of both of his hands together while speaking and likes to pose for photographs in his office, between gilded stucco and an antique globe. Besson, who calls himself a patriot, has just written a book, "For the Nation," a literary hymn to his native France, which he says he has "loved and idolized" since his adolescent days. The immigration minister was born in Marrakech, Morocco and only came to France he was 17.

Three months ago, the minister announced the beginning of a constructive debate in the "motherland of human rights." He was convinced that ownership of the concept of the nation had been left to right-wing extremist Jean-Marie Le Pen and his Front National (FN) for far too long. There was nothing wrong with launching into this debate, which is currently raging in many European countries, partly as a reaction to the growing number of Muslims living in Europe.

The discussion centers on their rights and obligations, and on their acceptance of Western values. A burqa ban is not just being debated in France, but also in Denmark and Italy, and in December the Swiss voted in a referendum against the construction of minarets.

But it is difficult to conduct this discussion in an objective way, particularly as it has formed part of an attempt to exclude Muslims in many places. Citizens, politicians and journalists have become embroiled in aggressive and, in some cases, racist discussions over how visible Islam can be allowed to become in the day-to-day life of the republic, and how French the five to six million Muslims living in France are or should be.

On the Web site Besson had set up for the debate over national identity, censors soon found themselves having to delete many xenophobic messages. And at the citizens' forums that the Immigration Ministry organized throughout the country, many citizens expressed what they called their "fear of Arab domination."

At one such forum, the mayor of Marseilles said that he was pleased with the Muslim residents of the city, but not about the fact that they recently walked through the streets carrying the Algerian and not the French flag after a local club had won a football match. Besson later apologized for the mayor's "faux pas."

For months, the Socialist opposition has accused Besson of using the national identity debate to deliberately gloss over the country's real problems: the budget deficit, the mountain of debt, unemployment and the unredeemed promises of Sarkozy, who came into office as the "purchasing power president." According to the opposition, the only purpose of Besson's campaign is to keep these pressing problems off the political agenda before regional elections in March.

Falling Out with the Socialists

These critics are all too familiar with the minister. After all, Besson was once a member of the Parti Socialiste (PS) himself and, as recently as the 2007 presidential campaign, worked as an advisor to the party's candidate Ségolène Royal, writing pamphlets about Sarkozy, in which he derided him as an "American neoconservative with a French passport."

But then he had a falling-out with Royal, turned his back on the party, penned a sharp critique of the Socialists and, before the runoff election, defected and offered his services to Royal's opponent, Sarkozy. He is said to have helped Sarkozy prepare for the major television debate between the two candidates, even playing the part of Royal in role-playing exercises. The Socialists have branded Besson a traitor ever since.

As the president's protégé, Besson is constantly making headlines. He is everywhere. Following in the footsteps of Sarkozy who, as interior minister, closed the Sangatte refugee camp on the northern coast in 2002, the current immigration minister had a refugee camp near Calais forcefully cleared last September, in full view of live TV cameras and with the help of aggressive security forces.

Like Sarkozy, Besson is loud and provocative. He rages against the sham marriages with which immigrants acquire French citizenship, he pursues illegal immigrants and he is reporting record numbers of deportations. He was also Sarkozy's ideal pick to run the national identity campaign. A former leftist from North Africa, Besson has even been in a relationship with a 23-year-old Tunisian woman for the past few months. He couldn't be more perfectly cast for the role.

At appearances in Paris, Besson says that he wants to promote "the pride of being French." He is even considering tying the granting of citizenship to a "pact with the republic." More than 350 citizens' forums have been held, and the Web site has already attracted more than 55,000 comments. Besson recently called the effort "an immensely popular success" -- to applause from the almost exclusively white audience at an event where he was speaking.

Besson's identity debate has merged with another controversy: the question of whether Muslim women should be allowed to wear the full veil or niqab (commonly referred to as the burqa) in public. Opponents argue that it contradicts the values of the republic and that the burqa doesn't belong in secular France, which already enacted a law banning Islamic headscarves in schools in 2004.

Last Tuesday, while Sarkozy and Besson were paying their respects to the Muslim soldier, a French parliamentary commission on the wearing of the full veil recommended that it be banned in all public facilities. The recommendation called for barring women wearing the burqa or the niqab access to government offices, hospitals, social service offices, schools and public transportation. It is now up to the parliament to turn the recommendation into law.

On the surface, the commission's task was to determine whether the burqa is compatible with the dignity of women. But the real issue goes to the more fundamental question of how much Islam secular France can tolerate. "I think that we have to ban the burqa," says Besson, "in the interest of women." Sarkozy demanded the same thing in June 2009, when he said: "The burqa is not welcome in the territory of the French republic." His wife Carla sat next to him and nodded. The commission interviewed more than 150 experts, it discussed whether wearing the burqa is a religious requirement, and it even considered the argument that a ban could improve safety on the roads. But that would have meant including motorcycle couriers and members of other professions in a ban on the wearing of "head coverings that limit the field of vision."

André Gerin, the chairman of the commission and the Communist mayor of the Lyon suburb of Vénissieux for 24 years, said that although Muslims clearly have a right to live in France, they "will have to assimilate to our society." This puts Communist Gerin on the same page as former Socialist Eric Besson. Both men are nostalgic for a France that no longer exists, and many Frenchmen apparently share their nostalgia. It is like an everyday melody, writes Le Monde, "that suggests to the public that France is no longer the way it used to be, since immigrants, particularly Muslims with their families, have settled here."

Vincent Geisser, a sociologist, says that "the burqa debate, together with the discussion of national identity, contributes to radicalizing the positions of practicing, moderate Muslims." According to Geisser, a legal ban on the burqa could make Muslim women even greater victims than they are today.

It seems that Besson has lost control over the debate, and now even the conservatives fear that the propaganda campaign may be damaging. His promotion to the post of deputy leader of the ruling conservative Union for a Popular Movement (UMP) has also ruffled some feathers. The party's strategists wonder whether borrowing the slogans of the far right will not just serve to mobilize supporters of the Front National during the regional elections.

Sarkozy had already altered his tone at the beginning of the year, when, adopting a statesmanlike tone, he called for national unity and asked his fellow Frenchmen "to debate without tearing us apart, without insulting us and without dividing us." The president is expected to put an end, for the time being, to the debate over the national identity next Thursday. The controversy over the burqa ban has also been postponed until after the elections. For now, the Constitutional Council will examine whether a ban is even constitutionally acceptable. But the question remains whether it will be possible to end the discussion as quickly as it began, and whether relations between Muslims and non-Muslims in France have suffered permanent damage.

"Our country cannot allow us to stigmatize French citizens of the Muslim faith," Sarkozy said at the grave of Harouna Diop. "Today, Islam is the religion of many Frenchmen." Éric Besson, the man behind the national identity campaign, is reported to have nodded slightly in response to the president's comments.