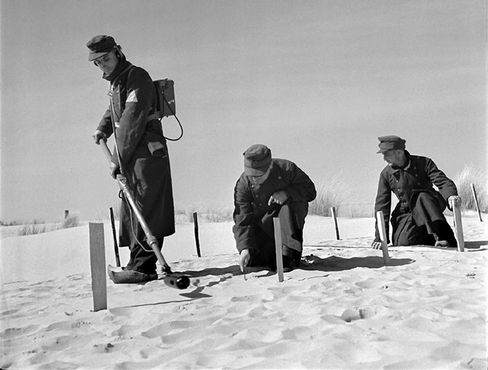 German prisoners of war being used as mine clearers in Dunes along the coast of France.

For Herbert Flemming, the end of World War II marked the beginning of the most dangerous period of his life. The German prisoner of war, an electrician in the German Luftwaffe air force, was put to work clearing mines on the French Mediterranean coast near the town of Antibes. With no proper training and, initially, without adequate tools, he and others like him risked their lives with every move they made. His friend Rudi Nohr died during their very first mission in the minefields. "Herbert, stay back where you are, don't move," Rudi shouted. Then the mine blew up and killed him.

Flemming was 19 at the time. "I'd never seen a dead soldier before," he recalls. "Rudi's body was full of holes and there was blood coming out of him everywhere." Tears well up in his eyes as he relives the moment 63 years later. He places his hands on his ribs where he was wounded by a piece of metal, a splinter from a mine that exploded on a later occasion.

By the end of the war mines had been laid on more than 500,000 hectares of land in France. And it soon became clear who would get the task of clearing them: German POWs for the most part, regardless of whether the mines had been laid by German army engineers or by the French army in an attempt to hold back invading German forces.

To this day it is not known how many POWs were used for this high-risk form of forced labor between mid-1945 and the end of 1947. Possibly as many as 50,000 according to Freiburg-based historian Rüdiger Overmans. The number of Germans who were killed in the course of these mine-clearing activities can only be guessed at. It may have been around 1,800, and 500 Frenchmen are also believed to have died.

Decades later French reconstruction minister Eugène Claudius-Petit wrote that these men were "heroes," making no distinction between the French mine clearers and the German POWs who had been coerced into helping them. In his words they had died "to safeguard peace for the living."

But they are forgotten heroes, heroes without a lobby. Overmans touches on the fate of these men in a book on the collapse of the German Reich in 1945. French historian Danièle Voldman has written a monograph on the subject. Encouraged by new legislation on matters concerning former prisoners of war from eastern Germany, veterans who survived compulsory mine clearing in France are starting to speak out. They are demanding compensation from the German government -- €20 for every day they were forced to work in the minefields. The costs that Berlin could be facing are relatively modest. The list of survivors in question would have a maximum of 19 names on it. "If the German government refuses to accept our demand," Flemming says, "we'll turn to the French government."

There can be no doubt that an injustice was done to these men. As prisoners of war they were under the protection of the Geneva Convention of July 27, 1929. Article 32 unequivocally states that: "It is forbidden to use prisoners of war at unhealthful or dangerous work."

The French had asked the Americans and the British before the end of the war to hand German POWs over to them for use in mine-clearing operations. London and Washington were both hesitant to comply, citing the Geneva Convention. But during the San Francisco Conference from April to June 1945 at which the UN Charter was adopted, French Foreign Minister Georges Bidault managed to overcome Anglo-American resistance, Overmans argues, since "there was no longer a German government that could have reacted."

The mine clearers received better food rations than the other POWs at the prison camp Flemming was in. But disregard for their safety resulted in an extremely high proportion of men being killed or wounded. A former mine clearer from Munich reported that only three men out of a total of 30 in his group survived the month of April 1945 unhurt. It was not until the Red Cross protested that there was a significant decline in the number of fatal accidents. The organization told the French that more than 20,000 men were likely to die clearing the estimated 100 million mines. After that the mine clearers were given better training and equipment.

They received very little compensation for the dangerous work they did. They were given a small allowance, "only enough so that you could buy an occasional cigarette," Flemming says. "And if somebody needed something urgently, like getting a new tooth, we would pool what money we had."

Flemming wrote to Chancellor Angela Merkel on behalf of the forgotten mine clearers, but has thus far received no response. Instead, he got a letter from the federal office of public administration saying: "Compensation for work done by former German POWs can no longer be claimed." This form of legal recourse has been barred by the statute of limitation since September 29, 1978, the letter said.

Flemming, who was a plant foreman for engineering company Thyssen until he retired, says he wasn't aware of this. In general, he feels thoroughly misunderstood. In 1948, when he was released from the POW camp where he had been in detention, all he got was 300 marks so that he could buy himself a new suit, new shirts, and a new pair of shoes.

But compensation is not his primary objective. What he and his fellow mine clearers are mainly interested in, Flemming says, is a little recognition, maybe a belated word of thanks. "We were prisoners of war, yes. But we were made to pay a very heavy price."