German Interior Minister Wolfgang Schäuble is in demand these days in Berlin. No one in the German government knows Nicolas Sarkozy, the newly elected French president and former interior and finance minister, as well as Schäuble. The two men met in the 1990s and have remained in contact since.

Schäuble has sat across the table from his French counterpart at countless meetings of European interior ministers. He has not failed to notice how the impatient Frenchman would routinely leave the meetings early, irritated by the excruciating rituals of European consensus building. Sarkozy was also known for spending little time at joint Franco-German cabinet meetings, because he found the dominance of his former mentor, French President Jacques Chirac, intolerable.

Schäuble would, on occasion, meet with Sarkozy on behalf of the chancellor. Angela Merkel has also known the Frenchman for years, but has recently avoided encounters with him, anxious not to jeopardize her good relationship with Chirac. It was left up to Schäuble to deliver messages or cautiously explore Sarkozy's positions. As a result, the German interior minister has a pretty good idea of what makes the man who is now in charge at the Elysée Palace in Paris tick.

Most of All, Impulsive

What Schäuble has been able to report to his chancellor leaves little room for illusions. Berlin will have to get used to the idea that the man holding the baton in France, Germany's most important ally, will be a difficult partner. Patience is not exactly the new president's strong suit. Those who have dealt with Sarkozy in the past describe him as highly intelligent, dynamic and, most of all, impulsive.

Although Sarkozy has chosen to travel to Berlin on Wednesday for his first state visit -- just hours after his inauguration -- he has also made it clear that France's relations with its neighbor won't be quite as close as they have been in the past. "Although the German-French entente is still necessary," he writes in a statement summarizing his political positions, "I am convinced that it is no longer sufficiently powerful as a motor."

Sarkozy will have none of the friendly rhetoric that has been customary for almost six decades, and the kinds of affable scenes between German and French leaders -- former German Chancellors Helmut Kohl and Gerhard Schröder and former and current French Presidents François Mitterand and Jacques Chirac -- the world was accustomed to seeing will likely become a thing of the past. Sarkozy has little patience for the usual trappings of diplomacy. Indeed, he favors a "diplomacy of results."

Officials in Berlin fear that this cool exterior is a front for rock-hard French interest-driven politics. Sarkozy already has the reputation of being a hardliner when it comes to promoting the power and influence of the French economy.

But he would be wrong to underestimate the Germans' resolve. No one in Berlin is interested in talking about the tools of diplomatic coercion, at least not yet, or possibly even disclosing what they could be. But everyone involved knows that they exist:

So far Berlin has emphasized the positive signals coming from Paris. Sarkozy, the son of a Hungarian immigrant, portrays himself as a dedicated European who sees the continent as part of a strong trans-Atlantic partnership. A France that no longer reflexively positions itself against the United States is good news for Merkel, who makes no secret of her pro-American views. There are even signs of muted optimism in Berlin when it comes to the dispute over the European constitution. 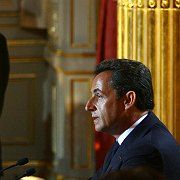 Sarkozy delivers his inauguration speech in Paris on Wednesday.

The project failed in 2005 when the Dutch and the French voted against it. Sarkozy has now proposed a "mini treaty" that would be limited to the parts of the constitution for which consensus could be reached and would include reforms of inefficient Brussels institutions. Without a new controversy over social welfare systems, the French National Assembly would give its blessing to the watered-down treaty. Officials in Berlin consider it "very brave" were Sarkozy to dispense with a second referendum by taking this step.

Observers are paying close attention, with a mixture of approval and concern, to how the future president plans to use the momentum from his election victory to enact deep-seated reforms of his country's ailing economy. "We must change the ideas, habits and behavior of the past to bring France forward once again," Sarkozy proclaimed on the evening of his victory. His advisors announced that the president plans to implement his tough reform program early on, during the first two years of his term in office.

'Not Afraid of Protection'

But almost every French administration's attempt to enact reforms has ended in burning barricades. "He will have to survive the barricade test first," says Wolfgang Nowak, a former advisor to Gerhard Schröder who now heads Deutsche Bank's Alfred Herrhausen Society for International Dialogue. To relieve internal political pressure and calm the Jacobean reflexes of his fellow citizens, Sarkozy portrays himself as the patron saint of "economic patriotism." "I want to protect our industry, our trades and our agriculture against a naïve view on the part of the competition," he says. "I am not afraid of the word protection."

This "combination of true reforms and a strong protectionist element could certainly stir things up in Europe," fears a high-ranking diplomat in Berlin, who also cites the risk that the European domestic market could "slowly erode" if important EU countries like France, Spain and Poland plan to promote only their own economic interests with the community.

The vote for Sarkozy will further boost a Europe of egoists. Madrid is a prime example. It has long irked other EU member states that the ultimate goal behind Spain's European policies is to maximize the billions it can suck out of the EU's coffers -- combined with a defensive stance toward foreign companies that reveals Spain's hostility to the idea of a European domestic market. The German energy conglomerate E.on, which had planned to acquire Spanish utility Endesa, was recently at the receiving end of this policy.

Sarkozy has been involved in similar situations that now lead his partners in Berlin to fear the worst. In 2004, as finance minister, he prevented German electronics conglomerate Siemens from taking over the ailing French company Alstom. It seems inconceivable to Sarkozy that a major foreign company could buy its way into his country. In France, the only country that boasts a school of economic warfare (École de Guerre Économique), a successful corporate takeover by a foreign company is considered about as devastating as losing on the battlefield.

Conversely, he has shown no restraint when the tables are turned. In 2004, Sarkozy resorted to every trick in the book to fight for the takeover of German-French chemical company Aventis by purely French competitor Sanofi-Synthélabo -- and he won.

Giving up His Passions?

Sarkozy has seen himself as a pro-industry politician until recently. Only a few weeks ago, he argued that German industrial wind turbine manufacturer Repower would be the natural partner of Areva, a French nuclear energy company. The French are involved in a bidding war for the German company with Indian competitor Suzlon.

No one expects Sarkozy to give up his passions now that he has taken over the presidency. "We will see a policy geared toward demonstrating and promoting French strength," says Norbert Walter, chief economist at Deutsche Bank. His counterpart at insurance giant Allianz, Michael Heise, even sees France's tremendous protectionism as a "potential risk for good relations with Germany and other European countries."

During the election campaign, economists and politicians noted with great concern how Sarkozy sought to paint European institutions as the cause of France's crises. The French, he raged, had "had enough of European commissioners, central banks, cabinets, experts and the media, who only want to think and decide for them."

Officials in Berlin's chancellery have sought to downplay Sarkozy's remarks, attributing them to campaign zeal. Once in office, they argue, Sarkozy will calm down, citing other European examples where radical positions like Sarkozy's ended up being short-lived. Sarkozy is, after all, an intelligent politician, open to other points of view. The Germans prefer to take a wait-and-see approach, noting that threats from Germany would be counterproductive in the current situation.

At an earlier meeting, Merkel already made it clear to Sarkozy that she has no intention of being manipulated. A few minutes into the meeting, it was clear that Sarkozy was only interested in discussing a joint press appearance. But Merkel coolly rejected the notion, insisting that she was not interested in discussing photo opportunities until the substance of the meeting had been addressed.