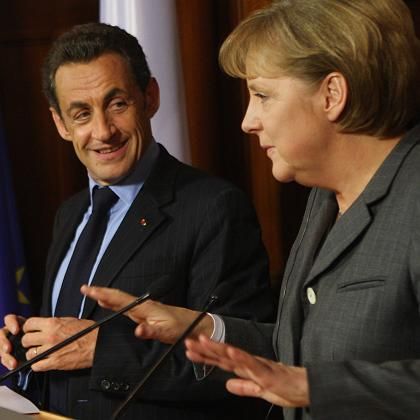 A cold snap in Franco-German relations may be thawing -- at least on one serious issue that has been dividing Berlin and Paris. German Chancellor Angela Merkel and French President Nicolas Sarkozy announced jointly on Monday that they had reached a compromise regarding Sarkozy's proposed Mediterranean Union.

Merkel had repeatedly criticized the project in recent weeks. But on Monday, the leaders appeared to have forged a deal. "You will see that we have found a compromise on this Mediterranean Union which will not exclude anyone," Sarkozy said. "We agree on both the principle and the detail."

At a press conference held jointly with Sarkozy at the annual CeBIT computer trade fair, where France is the official guest country, German Chancellor Angela Merkel added that the ensuing outcome should be called the "Mediterranean Union" and that it "should be a project of all 27 (European Union) member countries." Merkel was referring to her position that any deal to create a union with the Mediterranean states that border the European Union should be negotiated and drafted in conjunction with all EU member states -- not just those that border the sea, as Sarkozy had initially proposed.

The leaders did not, however, outline any specific details. Sarkozy said they didn't want to take the EU spotlight away from Slovenia, which currently holds the bloc's rotating presidency. France assumes that post in July, and Sarkozy had planned to make the foundation of a Mediterranean Union the centerpiece of Paris' six-month tenure.

Merkel had previously accused Sarkozy of seeking to side-step existing EU policies in an effort to increase France's diplomatic clout abroad and of proposing to spend funds from the 27-nation bloc to help establish his new union. Sarkozy is hoping to use what critics have disparagingly called his "Club Med" concept -- after the French holiday resort chain -- to strengthen ties with North African and Middle Eastern nations as well as Turkey. But German diplomats see it as an attempt to establish a French-dominated, second-tier EU. And some accuse him of using it to bypass possible membership for Turkey in the EU.

The respected Frankfurter Allgemeine Zeitung wrote Tuesday that Merkel had initially rejected Sarkozy's plan not because of German, but rather European interests. The problems France sees and wants to resolve with its neighboring states are also perceived by Merkel as general problems for the EU: illegal immigration, climate and environmental protection, trade and the Mideast peace process.

Merkel is instead calling for the initiative to be incorporated into the EU's Barcelona process, established in 1995 and aimed at promoting dialogue between the EU and 10 neighboring countries. Sarkozy had long criticized the program because only 70 percent of the €16 billion allocated for the Barcelona process had been spent in 12 years -- which he saw as a sign that the bloc was not serious enough about improving ties with its neighbors.

EU To Be Included at Summit

Originally, Sarkozy had planned to hold a summit in Paris on July 13 at which countries bordering the Mediterranean would establish the new group. Other EU member states were to be invited the following day to give their blessing. Officials said, though, that Sarkozy agreed on Monday to re-order those events, so that a conference would first be held between all Mediterranean nations and EU member states. A meeting would be held subsequently to hash out the details of a new pact.

According to German media reports, disagreement over the Mediterranean project and several other policy disputes caused the postponement of an annual Franco-German summit originally scheduled to take place just after their appearance in Hanover. On Monday, though, the leaders sought to dispel that notion.

The leaders also indicated Monday that they had found additional common ground to address during France's upcoming EU presidency. Both countries, for example, want to see new policies that would prevent tax evasion on the scale recently uncovered of rich Germans who had been hiding their money illegally in private foundations in Liechtenstein.

"We want to further develop policies against tax havens and will support France in this during the presidency," said Merkel.

The two leaders also suggested a compromise may soon be found on the issue of EU plans to impose mandatory carbon dioxide emissions on new cars. Germany has argued that both large and smaller cars should contribute to cuts. But the French, whose cars are smaller, have disagreed, saying their less-polluting cars should not be hit.

Since Sarkozy took office last May, Merkel and Sarkozy have differed significantly on other issues, including management of the European Central Bank -- Berlin has defended its independence, whereas France has encouraged it to take steps to slow the euro's fast climb against the dollar -- and nuclear energy policy.

Both Merkel and Sarkozy sought during the press conference to verbally dispel media speculation that policy disputes had soured relations. "It's obvious that we always find agreements when it matters," Merkel said.