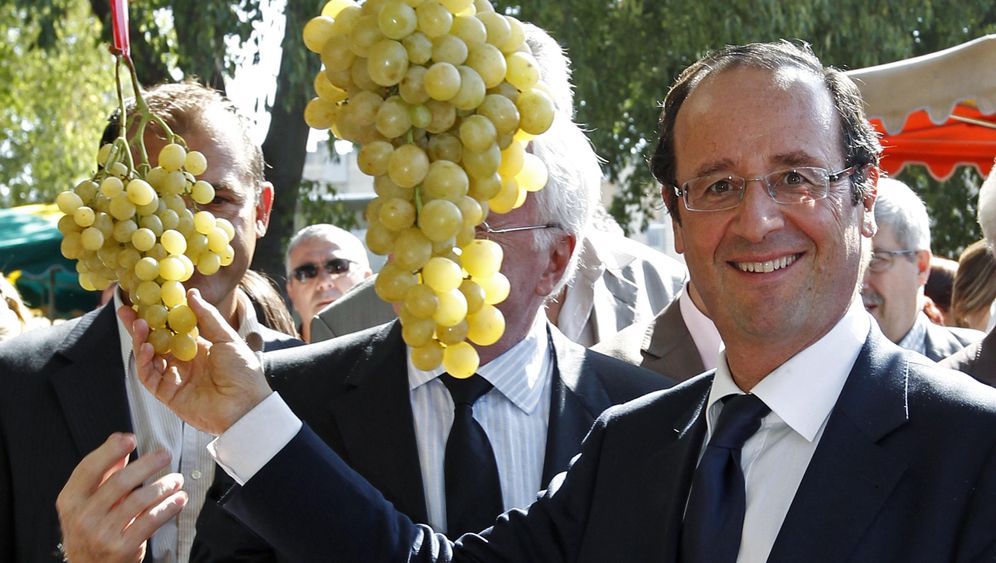 The candidate was trapped in a paradox, but he seemed not to notice. Wearing the classic blue colors of the French republic to celebrate the occasion, François Hollande signed the "Pact for the Equality of Man and Woman" in a small room at the National Assembly in Paris last Tuesday.

By signing the document, he was pledging to fight for equal gender representation in public offices. But Hollande, who was long the chairman of France's Socialist Party, is presently doing his best to defeat two female rivals for the honor of running against President Nicolas Sarkozy in the April 2012 presidential elections.

The decisive vote for Hollande is this Sunday, when the French will vote in a primary -- which is open to all voters -- to determine the Socialist challenger to the president. Opinion polls show that Hollande, 57, is the clear favorite, ahead of Martine Aubry, 61, and Ségolène Royal, 58, as well as three other male candidates.

What's more, Hollande, who has been a selfless servant of his party since the glorious days of former President François Mitterrand, stands an excellent chance of leading the left back to the nation's top office after 17 years and three consecutive defeats. According to a recent survey, the French -- by a score of 48 percent to 28 percent -- are more confident that Hollande rather than Sarkozy can solve the country's economic and financial crisis. The poll results are astonishing, given that Hollande has never even held a cabinet position in France.

Indeed, Sarkozy's current popularity ratings are so low that the right is panic-stricken. And its loss of control of the Senate in elections last week -- a body which the conservatives in France have controlled since the Fifth Republic came into being in 1958 -- was "more than a defeat -- a trauma," Hollande concluded. The Senate, France's second parliamentary chamber, is more representative of the small towns and provincial cities in rural France. As a rule, it has been a bastion of conservatism, a place where a more nostalgic version of France, with all of its clichés, lives on. The Senate vote showed that, if traditionally conservative rural areas are abandoning Sarkozy, he could be in deep trouble.

Fellow party members have cautiously suggested that the president should decline to run again, and make way for potentially more promising underlings, like Prime Minister François Fillon or Foreign Minister Alain Juppé. Uncharacteristically, Sarkozy has not responded, but he apparently wants to focus his attentions on the euro crisis. He is also set to host G-20 leaders at a summit in Cannes in early November. And by then his wife Carla Bruni will have delivered their first child -- which could generate some sympathy for Sarkozy as the first to father a child while in the Elysée Palace.

Hollande, for his part, does not believe that Sarkozy will withdraw from the race. He knows that he and Sarkozy are both adept at bouncing back after setbacks. And he is trying to impress upon his jubilant fellow Socialists that their hopes for victory next year cannot rely completely on Sarkozy's self-destruction.

Even the first hurdle, the party primary, is in fact more challenging than the polls would suggest. Aubry and Royal, the two women Hollande must defeat, are first-class rivals. And both have old scores to settle with Hollande, Royal as his former partner and Aubry as a long-time rival within the party. Both women accumulated government experience under former Presidents Mitterand and Lionel Jospin; Hollande has no such experience. Both have demonstrated while in office that they possess killer instincts; Hollande has not. Both are deeply motivated and goal-oriented politicians; Hollande doesn't seem to mind taking a more circuitous route to achieve his aims.

His image as a good-natured, constantly smiling, always witty tactician in the wake of more prominent politicians has not protected him against countless poisoned arrows. Aubry, the daughter of European political heavyweight Jacques Delors, has called him a "pansy." Aubry never forgave Hollande for seeking to portray himself as her father's political heir for a time following Delors' 1994 return from Brussels after serving three terms as president of the European Commission.

Royal, on the other hand, who is the mother of his four children and was his life partner for 30 years before he left her for Paris Match journalist Valérie Trierweiler, resents him for a double betrayal -- in love and in politics. Five years ago, in his position as party leader, he did his utmost to dissuade her from running for president against Sarkozy. It is rumored that she offered not to run if he dropped his new mistress -- a decidedly romantic deal that never materialized.

Hollande, a lawyer by training met Royal when they were both students at the elite ENA University. Throughout most of their relationship, Hollande found himself the object of public derision. The French called him "Monsieur Royal" -- while his own career lacked glamour, his wife became a cabinet minister, the head of a regional council and later a presidential candidate.

Hollande held a post on the French audit court, was the office manager of former Prime Minister Pierre Mauroy's press secretary, and became a member of the town council in the central French town of Ussel. He was a member of parliament, and later he became a university lecturer and party secretary for economic issues. He assumed his most important political office, the chairmanship of the Socialist Party, in 1997. Given his résumé, it's no surprise that few took him very seriously.

His short stature (Hollande is 1.71 meters, or 5'7" tall -- making him three centimeters taller than Sarkozy) has also helped make him an object of humor. He was turned into a comedic character on a satirical puppet show broadcast by the Canal+ television channel. After the real Hollande had lost 15 kilograms (33 pounds) to shed his jovial, roundish figure, the puppet that portrayed Hollande on TV was constantly fainting out of hunger.

But even as he lost weight, Hollande became more grounded. Today he jokes that he isn't easy to knock over because of his low center of gravity. Friends say that he suffers from the derision and the intrigues, but that he hides his emotions behind a mask of cheerfulness. Hollande is a political professional without an overblown ego. Unlike Sarkozy or former International Monetary Fund chief Dominique Strauss-Kahn, there seems little chance that Hollande could succumb to scandal.

Indeed, it would seem that France may actually be leaning towards electing a "normal" president. Such a thing seems almost impossible for a country that has long shown a preference for flashier leaders. Or visionaries like Charles de Gaulle. Hollande's message, by contrast, is disarmingly simple: What's wrong with less glare?

De Gaulle's successors, from Mitterand to Jacques Chirac, ultimately became tangled in a web of scandal, money, lies and backslapping, which sometimes made them look more like Mafia godfathers than enlightened statesmen. France has an unspoken fear of following in Italy's footsteps -- economically, culturally and politically.

The appeal of an uncharismatic politician could help fend off this threat. Royal has assumed the allures of a fundamentalist TV preacher seeking a mystical connection with the people. Aubry, for her part, is brusque and cutting. And Sarkozy embodies everything that the nation deeply abhors: fickleness, modernity, globalization and neo-liberalism. He is anything but down-to-earth.

Aubry, Royal, Hollande and Sarkozy are all competing in a miniature spectrum ranging from right to center-left, in which only nuances differentiate the candidates. Hollande, for example, wants to lead France out of the debt trap by closing "tax loopholes," thereby generating €50 billion in additional revenue. Whether such a plan is realistic is doubtful; every group affected would no doubt defend its loophole to the last euro. Furthermore, economist Nicolas Baverez has calculated that France must raise €120 billion in four years to embark on a path of rehabilitation.

The same likely applies to his plan for a "generational contract" in labor policy, under which a company that hires a young employee and keeps an older employee until his retirement would be able to save on social security contributions for both jobs. Aubry has criticized the plan for being expensive and inefficient.

Hollande also wants to reduce the nuclear share of France's electricity mix from 75 percent today to 50 percent. Unlike Aubry, Hollande has avoided making a pledge to phase-out nuclear energy entirely in the long term.

The Insecurities of a Nation

Hollande is "so malleable that he sometimes borders on opportunism," former Prime Minister Jospin said about his old companion. His indecision has become a survival strategy for Hollande in his 30 years of working within the party. This is how his eldest son Thomas once described his father's flexibility: "When you're in a room with him, you have a feeling that there are 10 open doors around him, and you never knew which one he'll walk through."

Ridiculed and vilified, cunning and hard to pin down, sophisticated and thick-skinned: What is it about this man, who former Prime Minister Laurent Fabius once dismissed as a "little joker," that would seem to enable him to connect with the fears and hopes, desires and insecurities of the nation at just the right time?

Hollande embodies an idealized and nostalgic image of France, of a past that is invoked in several French films, such as "Amélie." The characters in these films are ordinary protagonists in an environment that has not been destroyed by progress.

"It is a rejection of modern life, mass consumption, technology and liberalism," says historian Antoine de Baecque. France has been one of the most pessimistic countries in the world since the mid-19th century, says fellow historian Marc Ferro. "These films serve as an antidote."

Hollande could be a character out of these films: a crafty Gaul who defies the tribulations foisted upon him by fate. It's no coincidence that he has been compared to Raymond Poulidor, the "eternal second" in the Tour de France, who became a popular figure precisely because he was never first.

Sarkozy has come to believe that Hollande is his most dangerous challenger and would prefer to run against Aubry. She embodies the more aggressive side of socialism, while Hollande has a calming effect on older voters and the middle class. The political fronts have been turned around in this constellation. "The presidential elections are not about the difference between right and left, but between modern and conservative," say Sarkozy's planners. They see their candidate in the role of the reformer and Hollande in that of the diehard.

Jacques Chirac never appreciated the agitation of his successor and fellow party member Sarkozy. Now suffering from the early stages of dementia, Chirac is beloved by the French like a rich uncle -- and he has given his blessing to Hollande. During a joint visit to the Jacques Chirac Presidential Museum in Sarran in central France, Chirac was noticeably friendly toward the Socialist, who has represented a rural election district here in the Corrèze Département for more than 20 years. As if he were making an appearance with his own son, the former president suddenly said: "I will vote for him."

The perplexed Hollande, who has battled Chirac since he entered politics, signaled to him to be careful, because the microphones were on and the cameras were running. Instead, the former president turned to the journalists and said: "I can tell you that I will vote for Hollande."

When Sarkozy heard about the incident, he was reportedly so furious that Chirac's daughter Claude paid him a visit at the Elysée Palace in an effort to placate him.