Firefighters spent the entire night Monday battling to save Notre Dame cathedral. They were ultimately successful, but damage was significant and is still being assessed. President Emmanuel Macron promised that "Notre Dame will be rebuilt." But how difficult and drawn out will renovating such a massive old structure turn out to be?

In Germany, architects, art historians, structural engineers and construction workers faced a similar challenge in the 1990s. They wanted to restore Dresden's Frauenkirche, which had been little more than a pile of rubble since its destruction. The magnificent Baroque church was gutted by fire during the air raids on Dresden in World War II and collapsed on the morning of Feb. 15, 1945.

What did the experts learn from the experience? And what do they believe the next steps will be for Notre Dame? We asked Manfred Curbach, a professor and engineer who served on the committee that rebuilt Dresden's iconic structure.

Manfred Curbach is a professor and the director of the Institute of Concrete Structures at the Faculty of Civil Engineering at TU Dresden university. He also served as a member of the building committee for the reconstruction of Dresden's Frauenkirche church. He has contributed significantly to the development of carbon concrete and is a member of numerous scientific committees.

SPIEGEL ONLINE: Mr. Curbach, how do you rebuild a church like Notre Dame, which is more than 800 years old?

Manfred Curbach: That depends greatly on how severe the damage to the walls is. The Frauenkirche in Dresden was also destroyed by fire during World War II, with the church's interior burning for 26 hours. The natural stones from which the Frauenkirche and most of Notre Dame are built stand up well to fire. The problem lies in the heat generated by the fire.

Curbach: The high temperatures only slowly penetrate into the rock. So, it gets extremely hot on the outside but remains comparatively cool inside. That temperature difference creates tension in the stone: Parts can burst out or the whole stone can shatter. Entire pillars collapsed inside the Frauenkirche.

SPIEGEL ONLINE: What about Notre Dame?

Curbach: We don't know that yet. The fire raged mainly in the vaulted roof. It's made of wood, but it is set on top of the walls. Some weak points in the vault have apparently already been discovered. The big question is how hot the stone became. If just a bit of material broke off, then it can be repaired quite easily. Individual stones can also be replaced if they are damaged. But first they have to examine how stable the structure now is in its entirety.

SPIEGEL ONLINE: You saw the photos. How great do you think the chances are that the fire destabilized the entire cathedral?

Curbach: Given that the fire department arrived on the scene quickly, the damage to the walls is certainly not as dramatic as it was in the Frauenkirche. It's likely that stability has been broadly preserved. The cathedral's buttresses, which help support the load born by the walls and the weight of the roof, seem to be undamaged. That's a good sign.

SPIEGEL ONLINE: How can the roof be rebuilt?

Curbach: It's important to have good plans. There's a 3D model of Notre Dame, which will make reconstruction considerably easier, because you know exactly how the beams were arranged before the fire. But it will nonetheless be a great challenge, because Gothic buildings are very delicate and have many fine elements. Notre Dame is a perfect example of this construction style, including the spire that collapsed in the fire.

SPIEGEL ONLINE: After the fire in Notre Dame, will wood once again be used to rebuild the roof framework?

Curbach: I would assume so. Most other materials would probably be too heavy. Gothic builders didn't calculate the stability of their buildings the way that we do today. But they had a lot of experience and knew which materials they could combine in what way to ensure stability. If the people in charge decide on an alternative material, it would at least need to have properties similar to wood.

SPIEGEL ONLINE: And the roof itself?

Curbach: It's difficult to say whether lead will be used here again. It will come down to whether monument conservationists prevail and insist that everything be restored absolutely true to the original, or whether deviations are acceptable. If modern materials are accepted, it would also be possible to install modern insulation with foils and mats.

SPIEGEL ONLINE: How long do you think the rebuilding process will take?

Curbach: In this instance, bureaucratic hurdles are at least comparatively small, given that the cathedral is of great importance to Paris and, so far, all agree that the damage should be repaired. But Notre Dame is also a huge building. When we rebuilt the Frauenkirche, it took almost as long as the construction of the original building, even though we had cranes and modern technology at our disposal. Of course, it took more than 100 years to build the Notre Dame: I don't think it will take that long. But there is a lot of logistics and planning involved in a project like this. The roof truss was a work of art. Reconstruction will take years, perhaps even more than a decade. 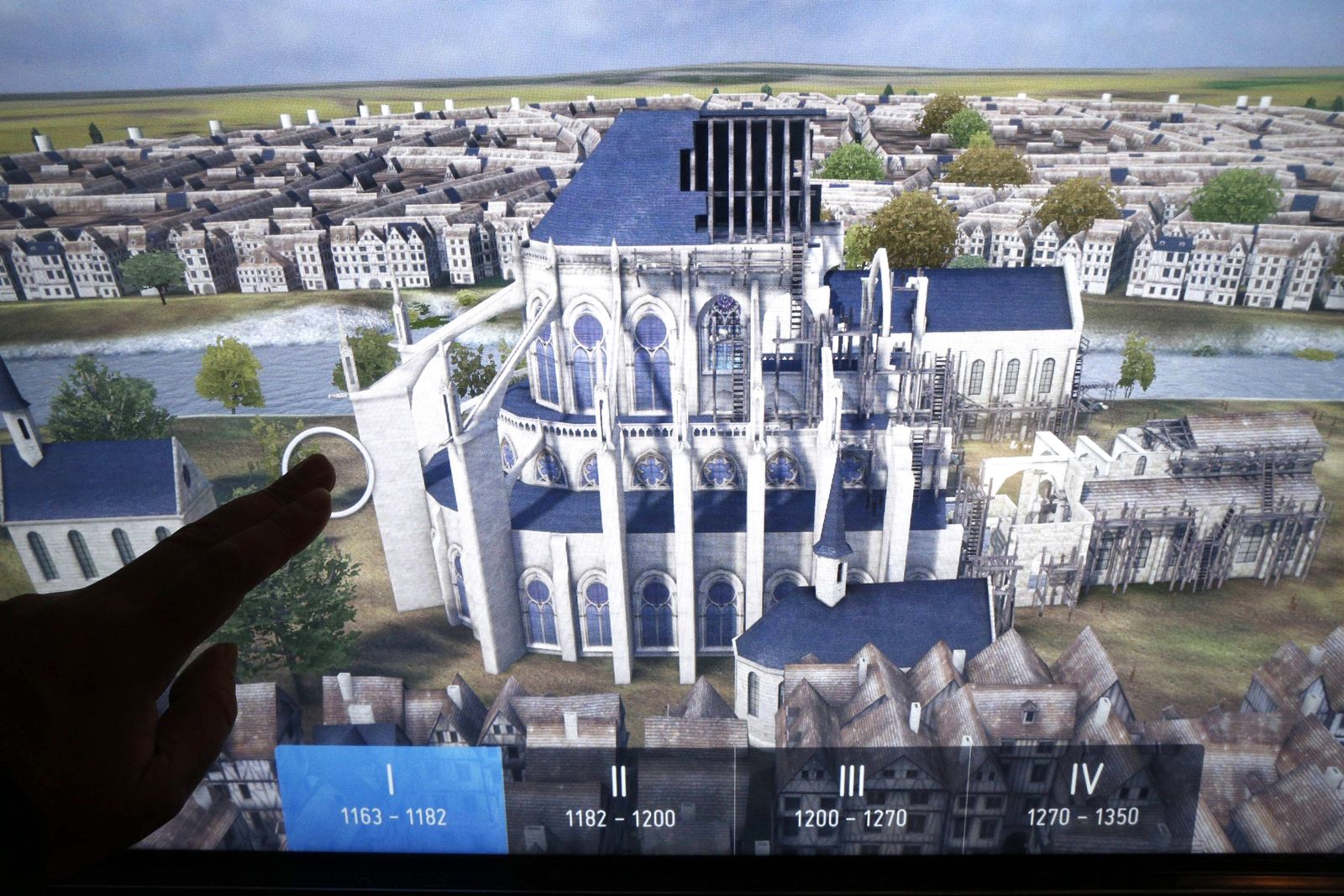 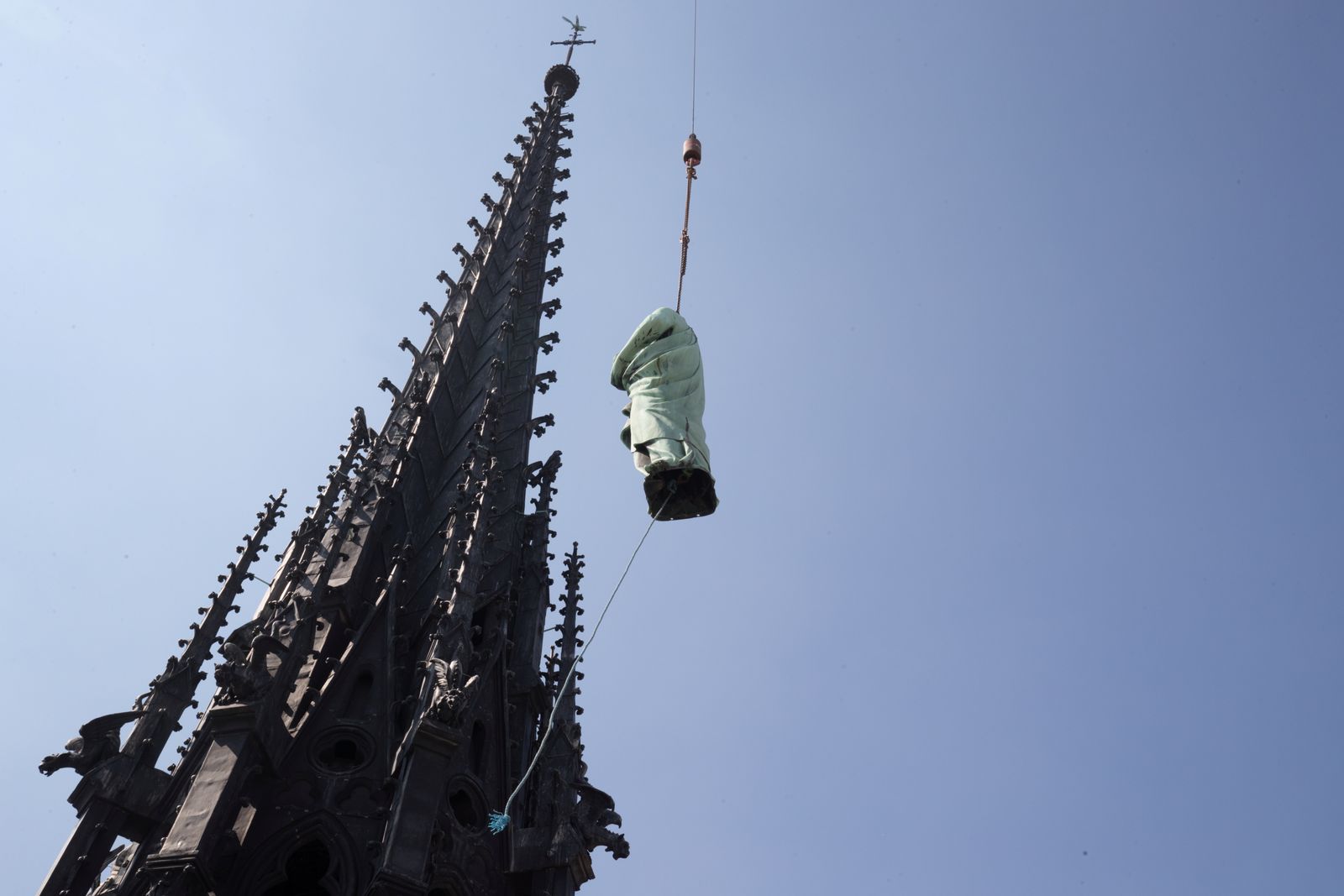 A statue of Saint John was removed from the spire of Notre-Dame cathedral for restoration work only days before the devastating fire broke out.