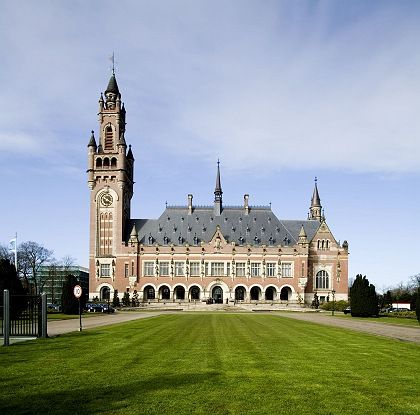 A champion of human rights, the Netherlands hosts several international courts, including the International Court of Justice in The Hague.

Could the screening of Wilders' video have been prevented by law?

No, at least not in principle. The Dutch constitution does not allow censorship, which is defined in Article 7 as the freedom to publish or show anything without prior consent. This freedom applies not just to the printing press. It also covers art, movies, photos, cartoons  indeed any medium that can be used to express oneself. Its a basic civil right and a founding principle of Dutch democracy. Basic civil rights also include the freedom of religion, protection from discrimination and the right to equal treatment. In democratic societies these basic rights are sacrosanct and protect individual citizens from the potential abuse of power by governments.

The only way the government could over-ride this basic right would be to declare a State of Emergency. Then it could have used special powers, including media censorship. But this was never a real option. Wilders' video may be a public relations disaster for the Netherlands but it is not a national disaster like war or serious flood caused by a break in the dykes.

Such an intervention was also out of the question politically. Dutch foreign policy champions human rights and the country hosts several international courts and legal institutions like the International Criminal Court, the International Court of Justice and Europol. The Netherlands initiated the European Convention on Human Rights which specifically forbids public authorities from interfering with the freedom to hold opinions and to receive and impart information.

So it is impossible to ask the Dutch authorities to prevent the publication of an insulting book or the opening of an exhibition which is guaranteed to upset people?

This is where things get complicated. No freedom is absolute, even in an open, democratic society. Articl 10, section 2 of the European Convention on Human Rights defines the conditions and restrictions that need to be prescribed by law and that should be necessary in a democratic society. It also allows for restrictions to freedom of expression for the protection of health or morals. However, in practice the European Court of Human Rights tends to allow publications that may shock, offend or disturb and permits member states a wide margin in deciding where morals should be protected.

So yes, someone could have tried to stop the film, but they would have stood little chance of success. Top Dutch lawyer Gerard Spong said he would go to court because the commercial interests of one of his clients were being damaged by Wilders. Spong has not revealed the identity of that client apart from indicating it is an Indonesian company trading in the Netherlands.

Other organisations and members of the general public have also taken action. The national public prosecution department has received dozens of complaints from citizens and organisations who feel Wilders has broken blasphemy and libel laws. The department says it will take a decision on whether or not to proceed with the complaints 'in due course'.

As a member of parliament, Wilders is immune from criminal prosecution for libel and the state's response will probably be cautious. Since the murders of political rising star Pim Fortuyn and film director Theo van Gogh, the gloves are off in Dutch political debate. There is a feeling that everything that needs to be said should be said - preferably as loudly as possible.

In addition, the prosecution department can look back to the 1997 prosecution of Hans Janmaat for discrimination. Janmaat was an extreme right-wing member of parliament with an anti-immigrant message that preceded those of Pim Fortuyn and Geert Wilders. His conviction and €3,400 fine for speaking out publicly against multi-culturalism was later generally regarded as unmerited. By todays standards Janmaats statement seems almost polite.

Wilders, meanwhile, has been warned privately by Justice Minister Ernst Hirsch Ballin that a criminal prosecution is a serious option, depending on the content of his film. After the meeting, Wilders complained of intimidation by cabinet officials.

So why was no action taken before the premiere?

The main problem was nobody knew what exactly the film was about. Nobody had seen it. Wilders steadfastly refused to preview his production to anyone. Legally speaking, there was no smoking gun - because the shot hadn't been fired yet. All lawyers knew was that Wilders intended to say insulting things about the Muslim religion. From the legal point of view, this could only be seen as attempted insult or conspiracy to insult. No such crime exists in Dutch law.

Dont forget that this is as much a story about political gamesmanship as it is about legal wrangling. By not saying explicitly what his video film was about but repeatedly dropping hints, Wilders raised expectations and at the same time kept himself out of legal trouble.

Is a civil claim now likely?

Dont underestimate the legal power of commercial self-interest. The former MP and critic of Islam Ayaan Hirsi Ali was forced out of her home after her neighbours managed to convince a judge that the value of their property suffered from her presence.

Wilders has already abandoned attempts to show his video during a press conference in a building next to parliament in the centre of The Hague. Security costs would have amounted to several hundred thousand euros, which he said he couldn't afford. In addition, nearby shop owners claimed they would need to take increased security precautions for months and said they would demand compensation.

But Egbert Dommering who is a professor of law at the University of Amsterdam and a respected expert on media law, thinks a civil claim against an unknown film might have been successful if it presented a clear and present danger to public safety. Then, he says, a banning order would be justified and could easily pass scrutiny by the European courts.

The order, could, for example, have banned publication on the internet. A limited ban cannot be considered censorship, Dommering argues because it would be proportionate in view of the expected damage. But no such move was made.