When France goes to the polls on Sunday to elect a new president, politicians in Berlin will be biting their nails in anticipation of the results. This is not only because Chancellor Angela Merkel must fear that François Hollande, who stands a very solid chance of becoming the next French president, could question the Germans' rigid austerity course in Europe.

There are also concerns that Hollande might put the kibosh on an important appointment Merkel would like to make. She wants to install German Finance Minister Wolfgang Schäuble in a second position as president of the Euro Group, the body that manages decisions regarding Europe's common currency. But the appointment has been delayed until after May 6, and the outcome is uncertain.

The acting president of the Euro Group, Luxembourg Prime Minister Jean-Claude Juncker, wants to leave the post in June. Unofficially, Schäuble has been a candidate to succeed him for weeks now. But the French election has prevented any decision thus far. Incumbent Nicolas Sarkozy reportedly signaled his approval for the appointment a few weeks ago, but his advisors then pushed him to withdraw his support -- or at least keep it quiet until after the election. They feared it would be unpopular with voters if Sarkozy appeared to further promote the savings dictate that Germany has applied to the rest of the euro zone countries.

And after the election? It's an open question whether Sarkozy will still have a say in the matter. Pollsters are predicting a victory for Hollande. In recent weeks, the Socialist Party candidate has clearly stated that he will seek to loosen the Germans' firm consolidation policies. Why, then, would he want to elevate the fiercest champion of these policies to head the Euro Group, as one of his first actions in office? Such a move would be tough for him to explain to his supporters. There is a considerable threat that as the new French president Hollande would thwart Berlin's efforts -- if for no other reason than simply to send a message.

A First Test for French-German Relations?

The decision on whether to appoint Schäuble could indeed become the first true test of the new alignment of French-German relations under a President Hollande. If Hollande were to hinder Schäuble's appointment, it would be a disastrous start. The chancellor would be duped. Following the letdown in the arduous negotiations over the appointment of the leader of the European Central Bank, which saw Merkel's hand-picked candidate Axel Weber drop out of the running, the chancellor is under increased pressure to ensure that another top European post is occupied by a German. So far, she has avoided publicly suggesting Schäuble as Juncker's successor. Schäuble has also made no public statements confirming his ambition to become the next Euro Group president.

But neither politician has taken any steps to deny the reports. Behind the scenes sources say that Merkel wants Schäuble and that he is prepared to take the job.

On Monday, the Euro Group's current president fuelled further speculation about Schäuble. At a public SPIEGEL event in Hamburg, Juncker gave his public support to the German finance minister, calling him the "ideal choice" to succeed him. Juncker has never been so clear in his endorsement of Schäuble. Sources inside the German Finance Ministry attributed the Luxembourg prime minister's words to "friendliness." Though sources inside expressed satisfaction, they said there had been no new developments. "There is nothing new to state," they said.

The post comes with considerable prestige. All important decisions about the currency union are made by the Euro Group and the influence of its president has grown considerably during the crisis in recent years -- a trend which is expected to continue. Even if plans to have a full-time Mr. Euro as president have been shelved, the group is still expected to become more professional and meet more frequently in the future.

It would seem almost logical for a German to do the job. Germany is the euro zone's model country -- its economy is booming and unemployment is falling. Policies for dealing with the economic crisis have been decisively shaped by Germany -- and Schäuble, to an extent, is also a personification of that success. In addition, a representative of a country with the best credit rating should assume the presidency, a factor that greatly restricts the number of potential candidates. Along with Germany, Luxembourg, Finland and the Netherlands are the only other countries with the cherished triple-A rating. Juncker's not interested, Finland has declined to appoint a president and officials in the Netherlands are currently busy preparing for new elections.

Among Merkel's conservatives -- the Christian Democratic Union (CDU) and its Bavarian sister party, the Christian Social Union (CSU) -- the majority would like to see Schäuble succeed Juncker. And even the CDU/CSU's coalition partner, which has often had difficulties with the finance minister, is playing along this time. "I think the idea that the post should be filled by a German is a reasonable one," said the Free Democratic Party's financial policy spokesman Volker Wissing. "Germany's role in stabilizing the euro is especially important." The politician welcomed Juncker's proposal to select Schäuble for the job.

In other parts of the euro zone, however, such euphoria is far from universal. Schäuble may enjoy tremendous respect from his colleagues, and his competence and the success of his efforts on behalf of the European issue are indisputable, but there are still some rumblings -- particularly in southern European countries moaning under the weight of their debt burdens. A strict German austerity minister at the helm of the currency union? Few are likely to be pleased with the idea. At the same time, some skeptics are hopeful that by putting a German in the role, it might force Germany to behave more moderately because it is also the president's task to mediate.

But is Schäuble capable of acting as a balanced mediator rather than a hard negotiator? Some believe representatives of smaller European countries or better suited as diplomats. And even if they aren't fundamentally opposed to his appointment to the position, opposition politicians in Germany also harbor doubts. "A Euro Group president who spends more money in Germany than he has, is going to have a difficult time promoting austerity in Europe," said Thomas Oppermann, the senior politician in the center-left Social Democratic Party's (SPD) parliamentary group.

The German government has noted that Juncker's successor is just one of the appointments that must be decided by the EU. New top jobs also need to be filled at the European Stability Mechanism, the permanent euro bailout fund that is supposed to start its work in July, along with the European Bank for Reconstruction and Development (EBRD), and new appointments on the European Central Bank's executive board. As always in appointments to major European bodies, the issue of regional balance will play a large role.

It would be impossible to convince the other member states that Germans should hold so many top jobs at the EU level. A French person could head the EBRD in the future. And Yves Mersch, the president of Luxembourg's central bank, is considered the favorite contender for the seat on the ECB board. But Mersch won't be able to take that job as long as Juncker remains head of the Euro Group.

Some observers in Brussels haven't ruled out the idea that Juncker might stay in office in the end despite his repeated statements that he would step down. The 57-year-old, observers say, is just waiting for people to beg for him to stay -- and it's very possible that is exactly what will happen after Sunday's election in France. 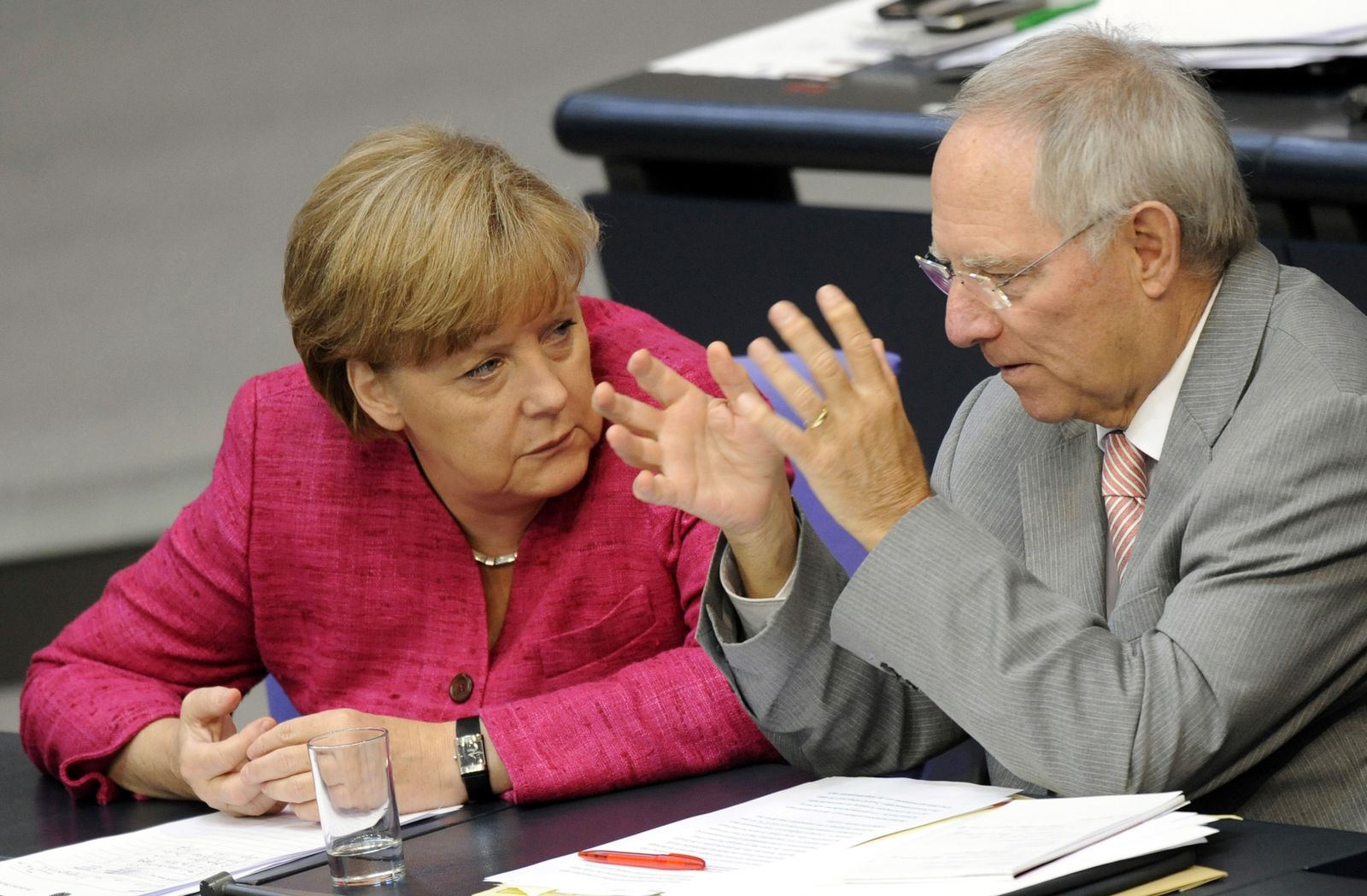 German Chancellor Merkel and her Finance Minister Schäuble: Will the French election foil plans to appoint him as head of Euro Group?