DER SPIEGEL: Mr. Minister, may we ask with whom you had breakfast this morning?

Le Maire: I started my day with a working breakfast here in the ministry with the Dutch Finance Minister, Wopke Hoekstra.

DER SPIEGEL: Were you able to convince him to sign onto the European recovery fund? As a member of the "Frugal Four,” the group of countries that is skeptical of the plan, the Netherlands has rejected it thus far.

Le Maire: We talked about it, as well as about many other things. The situation is currently changing. Everywhere in Europe, including among the "Frugal Four” countries (the Netherlands, Austria, Denmark and Sweden), there is a growing understanding that the situation is serious and the economic situation poses a threat. Solidarity at the European level is crucial for a political relaunch in Europe. All member states are aware of this.

DER SPIEGEL: Last week, though, Austrian Chancellor Sebastian Kurz asked in a DER SPIEGEL interview why taxes paid by an Austrian hairdresser should be used to help other European countries. Is Kurz one of your toughest opponents?

Le Maire: We don’t have any opponents in Europe, only different opinions. Furthermore, Austrian hairdressers don’t have to pay for the recovery fund. It will be paid for by the European Commission, which will take on joint debt at an extremely favorable interest rate. And, finally, the hairdresser will benefit from this clever financial arrangement, because it will ensure that she will continue to have a large number of customers.

DER SPIEGEL: You believe, in other words, that it will be possible to overcome the resistance of the four countries in question?

Le Maire: Yes, but it has to happen quickly. Every day counts. The situation is serious, many companies will go bankrupt, and there will be many thousands of layoffs. So we need quick answers. Otherwise, we risk social unrest and political upheaval across Europe.

DER SPIEGEL: After the difficult first weeks of the COVID-19 crisis, in which every EU country seemed to be pursuing national interests, the Franco-German recovery-fund plan came as a surprise to many people who no longer believed ambitious projects were possible. For you as well?

Le Maire: No, I was always optimistic. In early April, I was convinced something could come together. My cooperation with (German) Finance Minister Olaf Scholz went very well. We spoke on the phone almost every day in order to come to an agreement on the first rescue package. Olaf signaled from the beginning that he was willing to go quite far. We also agreed that the rescue package should include joint borrowing at the European level. That would later prove crucial.

DER SPIEGEL: And what happened then?

Le Maire: In the night of April 7 to 8, a video conference of the European finance ministers took place. It is my view that Europe evaded catastrophe by a hair’s breadth that night. The negotiations were extremely difficult and tough, and even after several hours, we still didn’t agree. At around 5 a.m., I said that it was a disgrace that, in a moment when this continent was counting its dead, everyone was looking at their own budget, their own euros. I was very afraid that it would end in disaster.

DER SPIEGEL: The finance ministers then adjourned until April 9th.

Le Maire: That was our salvation, after a sleepless night, we talked on the phone all day long, and we finally managed to overcome the resistance of various countries. But it was close, very close.

DER SPIEGEL: The draft of this first rescue package, which rests on four main pillars, was handed over to the European Commission. Nine days later, Emmanuel Macron and Angela Merkel announced the Franco-German push for the recovery fund. Was this announcement also preceded by a long debate?

Le Maire: It wasn't a foregone conclusion, to say the least. But I was always convinced that Germany would shift. I was also sure that this would only happen if France made a gesture and took steps toward the German position. We French always want to move as fast as possible and as far as possible.

DER SPIEGEL: In other words, you were at pains to take German sensitivities into account?

Le Maire: Two things were important to me: First, to recognize the legitimate German concern of not wanting to pay for the old debts of other countries. Secondly, we avoided all terminology that create problems. We deliberately avoided the words "Euro bonds” and "Corona bonds,” because they are red flags for the Germans. We wanted a mechanism that would enable future-oriented investments. Both were crucial.

DER SPIEGEL: At what point did you begin to feel confident that the grand European gesture would be successful?

Le Maire: I always believed in a joint agreement, but at first, I was skeptical whether we would be able to achieve one of this size. The Germans and French put 500 billion on the table and are proposing to take on joint debt. Truly historical decisions are radical. So is this one. Your chancellor has done a great thing and displayed significant political courage. She knew that the entire European construction and the unity of the Eurozone were at stake. She had to overcome German reservations to avoid being blamed for the failure of Europe. That is what she did, and I admire her very much for it.

DER SPIEGEL: Emmanuel Macron has been trying to convince the Germans of the need for a new European political project for three years. Are you not frustrated that it took the SARS-CoV-2 virus to make it happen?

Le Maire: It a banal truth, but aside from a few exceptions, the European Union has only ever moved forward in crisis situations. The events of recent weeks are proof. Our president has used this crisis to promote European integration. But the Franco-German pact is also the result of three years of work.

DER SPIEGEL: In recent months, Macron hasn’t exactly been trying to hide his disappointment with the Germans. In an interview in the fall, he called NATO brain dead. Months earlier, he announced that he would no longer exclusively rely on Germany as a partner. Were these uncontrolled outburst of anger, or deliberate provocations?

Le Maire: Sometimes you need to break some dishes and dispense with formalities so that new things can emerge. The president did that while also continuing to rely on Franco-German dialogue. And that was the right thing to do.

DER SPIEGEL: How great is the risk that no progression will be made beyond the rescue package and that everything will just continue as before?

Le Maire: That won't happen. We are seeing a turning point in Franco-German relations. And things are continuing. I discussed industrial policy projects with (German) Economic Affairs Minister Peter Altmaier, including the Franco-German production of batteries. Last week, we presented Gaia-X, a joint digital project for a new European data infrastructure. Peter Altmaier is a friend to me. We both want a more sovereign industrial policy for Europe.

DER SPIEGEL: So, for the time being, the virus has saved Europe?

Le Maire: I would be more inclined to say that the French president and three women saved this continent amid one of its worst crises: Angela Merkel, Ursula von der Leyen and Christine Lagarde, the head of the European Central Bank, who released 750 billion euros initially, then 600 billion more. This is unprecedented in the history of Europe. That, too, shows that we have different values here than in the U.S. and China.

DER SPIEGEL: How do you assess the performance of Commission President Ursula von der Leyen in this crisis?

Le Maire: She had two very clever ideas that were crucial: The first was her proposal to finance the rescue package through the Commission’s multiannual financial framework. That was very smart and reassured many member states that were still hesitant. The second was to take the Franco-German 500-billion-euro package of grants and increase it by adding 250 billion in loans.

DER SPIEGEL: The pandemic has hit France hard. When did it become clear to you just how severe the effects would be?

Le Maire: Early on, in February. I tried to tell the French the truth from the beginning. I explained back in March that we were probably facing the worst recession since 1929. This crisis is brutal. In just one month, we have seen the number of newly unemployed people rise by 800,000, which is unprecedented in recent decades. And the worst is yet to come.

DER SPIEGEL: Your government is doing quite poorly in public opinion polls at the moment. More than 50 percent of the French are dissatisfied with your handling of COVID-19 and 79 percent are concerned about the social and economic consequences of the crisis. The French nation seems troubled at the moment.

Le Maire: There are various reasons for that. Almost 30,000 people have died, that’s the first. And the crisis has shown us that our political institutions are no longer up to date, not transparent enough and no longer meet the expectations of our citizens. Our nation is heavily dependent on the state. If the state shows weakness - and we have to admit that it has done so during this crisis – the nation as a whole isn’t doing well. We have to think about changes to our state and its organization, not immediately, but after the first crisis measures.

DER SPIEGEL: One has the impression that your economic policy is already showing signs of change. On a recent TV show, you called for the renewal of capitalism and for its excesses to be stopped. It sounded rather like a left-wing demand.

"We are seeing a turning point in Franco-German relations."

Le Maire: I have been convinced for some time now of the need to reinvent capitalism. It creates too many social inequalities and ravages our planet. The crisis has only strengthened this view.

DER SPIEGEL: You have also said that the salaries of nurses should have been increased long ago. Why did you not fix the issue long ago?

Le Maire: We were aware of the problem. Nurses in hospitals, and teachers, don’t earn enough in France. But we also believed at the time that it was impossible to increase the salaries. The crisis has shown us, though, that there are more important things than the budget.

DER SPIEGEL: Does that also apply to other areas?

Le Maire: Absolutely. We will put even more emphasis on a sustainable environmental policy, on a green economy. We also anchored this in our rescue packages for the automotive and aviation industries. Together with Peter Altmaier, we have a joint hydrogen project to develop clean aircraft. But we also want to continue our policy of reform and to improve our competitiveness. We want Europe to position itself as an independent power in relation to China and the U.S. The next era has already begun, even if the old era is still putting up resistance.

DER SPIEGEL: Which world do you belong to?

Le Maire: I come from the old world, but I would like to lead this country into the next world together with Emmanuel Macron. I feel politically obligated to do so.

DER SPIEGEL: And you want to continue doing this as finance minister, or - as the rumors in Paris suggest – as prime minister?

Le Maire: To make things as clear as I can, no, no and no again. I want to stay in this ministry.

DER SPIEGEL: Mr. Minister, we thank you for this interview. 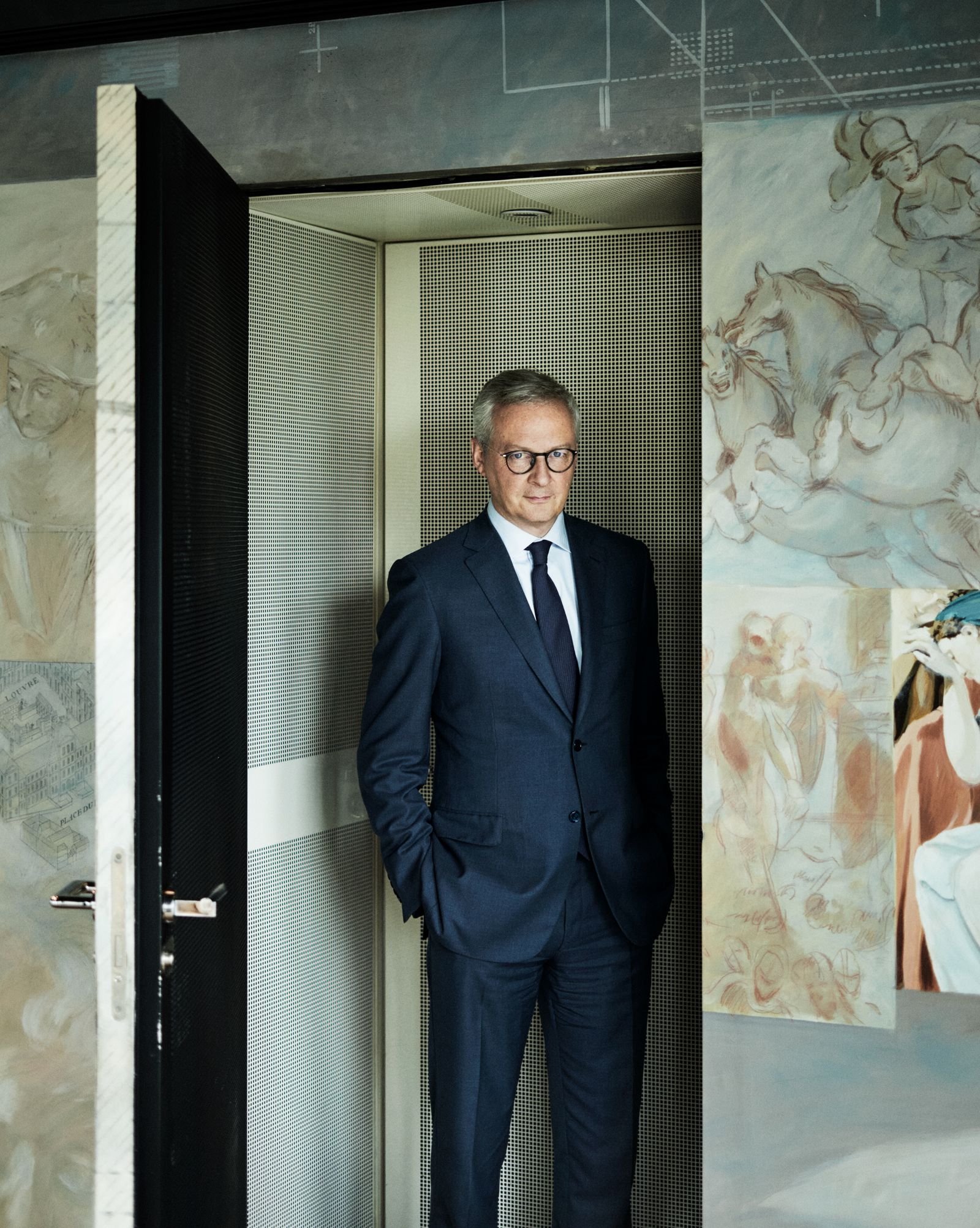 French Finance Minister Bruno Le Maire: "Solidarity at the European level is crucial for a political relaunch in Europe." 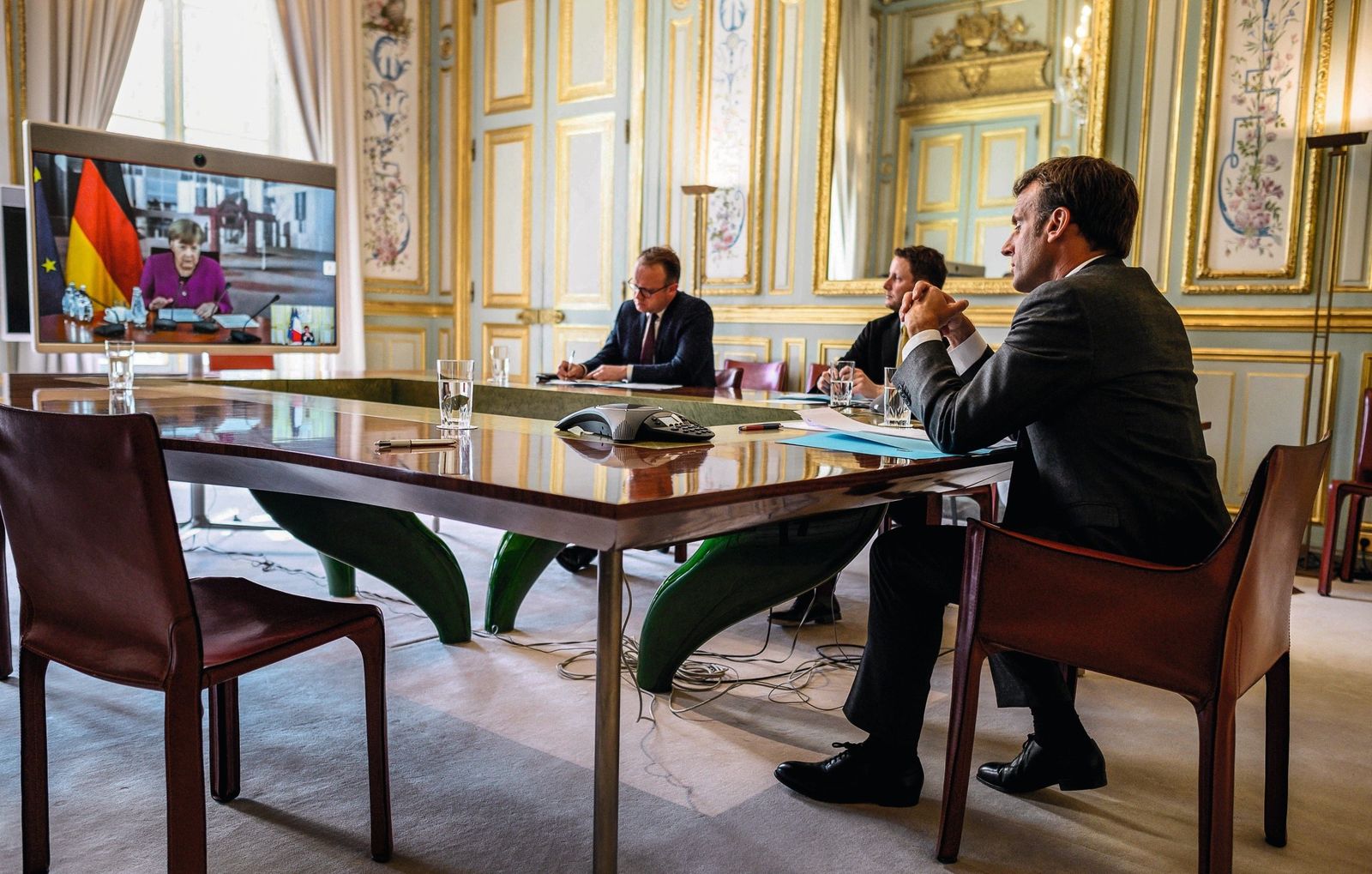 French President Emmanuel Macron speaking with German Chancellor Angela Merkel: "Sometimes you need to break some dishes and dispense with formalities so that new things can emerge." 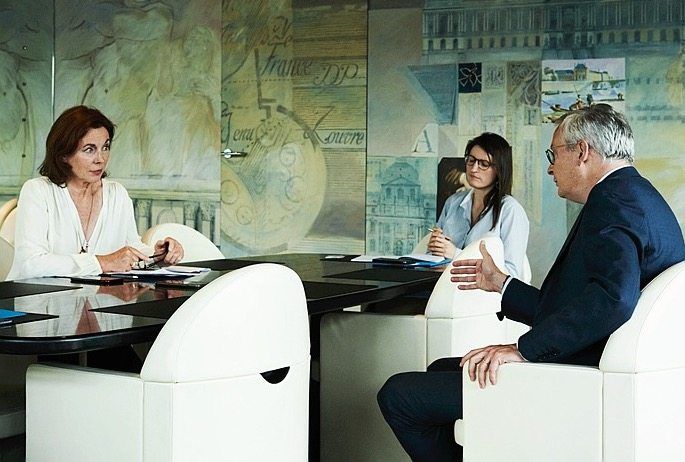 Le Maire with DER SPIEGEL reporter Britta Sandberg (left) and his assistant Melanie Voin: "the worst is yet to come."