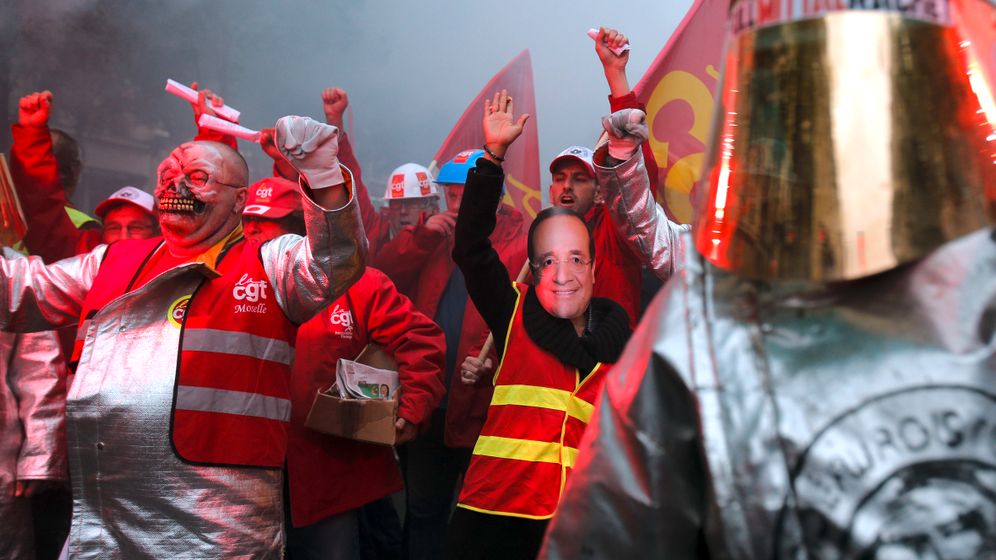 The minister compares his office with a position on the battlefield, one that you only leave as a fallen soldier -- or when the last bullet has been shot.

Arnaud Montebourg, the French minister of industrial renewal, carries his head high. In his mind, politics is a combat sport. A shiny, decorative sword hangs on the wall behind him in his office on the third floor of the enormous Ministry of the Economy, Finances and Industry in Paris. The 50-year-old combative politician tends to rush headlong into battle, but he is often left with no choice but to carry out the maneuver he despises the most: retreat.

That was the case last weekend, after Montebourg had become locked in a spectacular wrestling match with the steel giant ArcelorMittal, which employs 20,000 people at 150 sites in France. In Florange, north of the city of Metz, which sits near the borders with Germany and Luxembourg, the company planned to permanently shut down two blast furnaces and lay off 630 workers.

The industrial site, in the economically depressed Lorraine region, has long been unprofitable, and ArcelorMittal suffers from overcapacity. The plant closing probably wouldn't have attracted much attention, but Montebourg, who sees the preservation of industrial jobs as his primary goal, needed a success -- and forgot the principle of proportionality.

Instead, he brought out the biggest gun in the Socialist government's arsenal, and threatened the company with the temporary nationalization of the Florange site, and declared its main shareholder and CEO, Indian steel magnate Lakshmi Mittal, to be a persona non grata because he doesn't respect France. Mittal was shocked and requested a meeting with French President François Hollande. Prime Minister Jean-Marc Ayrault was forced to recognize that Montebourg had set a fuse which, if lit, could cause the government to explode.

France's business leaders felt as if they had been set back 30 years, to a time when the first Socialist president of the Fifth Republic, François Mitterrand, began his term with a wave of nationalizations and, after two years, was forced to reverse his policy. Some even drew a comparison with 1945, when the government nationalized automaker Renault after accusing it of having collaborated with the enemy. Wasn't Montebourg, who had always been an eloquent preacher of deglobalization, dividing business owners into different camps, good and evil, patriotic and unpatriotic?

"Has the government forgotten that nationalization means expropriation?" asked Laurence Parisot, the appalled head of MEDEF, the employers' union.

The liberal economist Nicolas Baverez, who predicted "France's downfall" 10 years ago and has just written a book titled "Réveillez-Vous" ("Wake Up"), saw the wrangling over Florange as proof that the French left still hasn't accepted globalization, and acts as if the country were an economic and cultural preserve. "The idea of nationalization sends an ominous message to all investors," Baverez said.

Even Finance Minister Pierre Moscovici carefully distanced himself from Montebourg, saying: "Our policy differs from the past experiences of leftists in power."

But the workers at the Florange site and their unions were thrilled with Montebourg's threat. According to a snap poll, a majority of the French people and, in particular, leftist voters, appreciate such showdowns with the patrons, or business owners. It's no accident that France's young people see working in the public sector as the ideal professional career. The government promises protection and security.

France is characterized by a "culture of equality," not one of competition, says historian Emmanuel Todd, noting that this is a legacy of the French Revolution. It seems only logical that Montebourg is sometimes compared with Louis Antoine de Saint-Just, the Jacobin executioner who denounced others in the name of the people.

But Hollande and Ayrault realized that this time the minister was probably on the wrong track. The prime minister withdrew the threat to nationalize Florange, and in return ArcelorMittal agreed to avoid layoffs at the site, although the two blast furnaces will remain shut down.

The drama over a few hundred jobs would probably be little more than an odd political comedy if it didn't highlight France's current situation and the president's dilemma. Hollande knows that he has to break open fossilized habits and structures, even though the society, like the Socialists, is stuck in its old way of thinking. He is also aware that one reason he was elected to succeed the high-strung and confrontational Nicolas Sarkozy was so that he could reassure the French, not stir them up and frighten them.

Hollande's efforts to reassure people are evident in his rhetoric. When Louis Gallois, the former head of the European Aeronautic Defence and Space Company (EADS), wrote a government-commissioned report, in which he called for electroshocks to improve French competitiveness, Hollande turned it into a "pact."

Instead of referring to structural reforms, he uses the seemingly harmless word "change." And when companies complain about the lack of "flexibility" in the French labor market, Hollande promises more "malleability."

The shift from the class struggle to a German-style social democracy, which is still something akin to heresy for the French left, amounts to a "Copernican revolution," says Finance Minister Moscovici. As if it weren't self-evident, he constantly tells his fellow party members and his voters: "Being leftist doesn't just mean distributing; it also means producing. Being leftist doesn't just mean supporting purchasing power, but also strengthening supply. And being leftist also means knowing that there is no reform policy without social dialogue."

The country, which derives its national identity from the Revolution, lacks this culture of compromise and consensus, which is why France often sees chaotic and violent outbursts of protest for relatively minor reasons. The unions don't go on strike when negotiations with employers have failed, but before they have even begun -- a questionable approach to impressing one's opponent.

The 'Party of Fear'

France is worried, France is beset by doubts and France is depressed, says writer Jean d'Ormesson, a member of the Académie Française. The philosopher Pascal Bruckner confirms his diagnosis: "France's biggest party is the party of fear. The French are afraid of the world, afraid of others and, most of all, afraid of their own fear."

This leads them to turn a blind eye to reality. They feel vindicated in their repression of reality by the crowds of tourists in the country, who value France precisely because of the museum-like quality of its savoir vivre.

President Hollande, a cautious tactician by nature who prefers to bypass obstacles rather than to jump over them, initially believed that he could take his time with the introduction of important reforms. One of the reasons he chose Ayrault to head his government was because of Ayrault's complacent approach. Together, Hollande and Ayrault allowed half a year to pass without embarking on any significant reforms. It was lost time, former Prime Minister Michel Rocard, the éminence grise of the Socialists, said recently.

A Plethora of Public Servants

Even former EADS chief Gallois, an advocate of the rapid restoration of French competitiveness, had to admit that a program like Germany's Agenda 2010 package of reforms would not be accepted in France. Nevertheless, he did not mince words in his report on the state of the French economy, noting that industry's share of economic output has declined from 18 percent in 2000 to 12.5 percent today. This puts France in 15th place among the 17 countries in the euro zone, and significantly behind Italy. The country's industrial sector has lost 2 million jobs since the Mitterand era. In 2011, France had a trade deficit of €71.2 billion ($93.1 billion), compared with a surplus of €3.5 billion in 2002. At the same time, the national debt has grown to 90 percent of the gross domestic product.

"Whenever a new problem popped up in the last 25 years, our country reacted by increasing spending," says banker Michel Pébereau.

Public sector spending now accounts for almost 57 percent of GDP, more than in Sweden or Germany. For every 1,000 residents, there are 90 public servants (compared with only about 50 in Germany). The public sector employs 22 percent of all workers.

La douce France is a sleepy country of bureaucrats and government officials who want their peace and quiet. But the bad news is beginning to pile up for Hollande.

Montebourg's agitation can be partially explained by the fact that since the Socialists came to power, the country has added another 150,000 unemployed, bringing the national unemployment rate to 10.7 percent. Some 45,000 people were added to the unemployment rolls in October alone. Instead of straightening up industry, Montebourg is preoccupied with fighting redundancy programs.

Only now has the government brought itself to grant companies €20 billion in tax relief to reduce labor costs. But it was a somewhat half-hearted step. Gallois considered €30 to €50 billion necessary. Last week, the government was confronted with another disastrous report, this time on the situation facing France's young people, who have been especially hard-hit by poverty and unemployment.

Sociologist Olivier Galland, who headed the study, detects a feeling of bitterness and abandonment among 16- to 25-year-olds. "All of the elements are in place that could trigger yet another explosion," like the one in the late fall of 2005, when there was rioting in the outskirts of major French cities.

"The system won't survive if we don't change," says Gérard Dussillol, a French expert on finance who works for a Franco-Belgian think-tank. He believes that "France, as a domino, can shake the entire system of the euro zone."

Even fashion designer Karl Lagerfeld no longer has anything good to say about his adopted country, where he claims to pay €2 million in annual taxes, which he calls "a sort of spa tax to the French state." French politics, with its symbolic tax on the rich, has become "grotesque," says Lagerfeld, while the French have "sterilized themselves intellectually." The only thing that still works in the country is fashion, he said in an interview in Berlin.

There are many indications that time is running out for Hollande, that Prime Minister Ayrault's days could already be numbered, and that the valiant knight Montebourg, who had initially aspired to be Ayrault's successor, is more likely waging a tragic battle against the windmills of globalization.

A recent issue of the magazine supplement to the daily newspaper Le Parisien, showed Montebourg photographed wearing a blue-and-white striped shirt made by the Breton clothing manufacturer Armor Lux, holding up a "made-in-France" Moulinex mixer. It was an emblem of the old France, at a time when there was no globalization and the world was still all right. 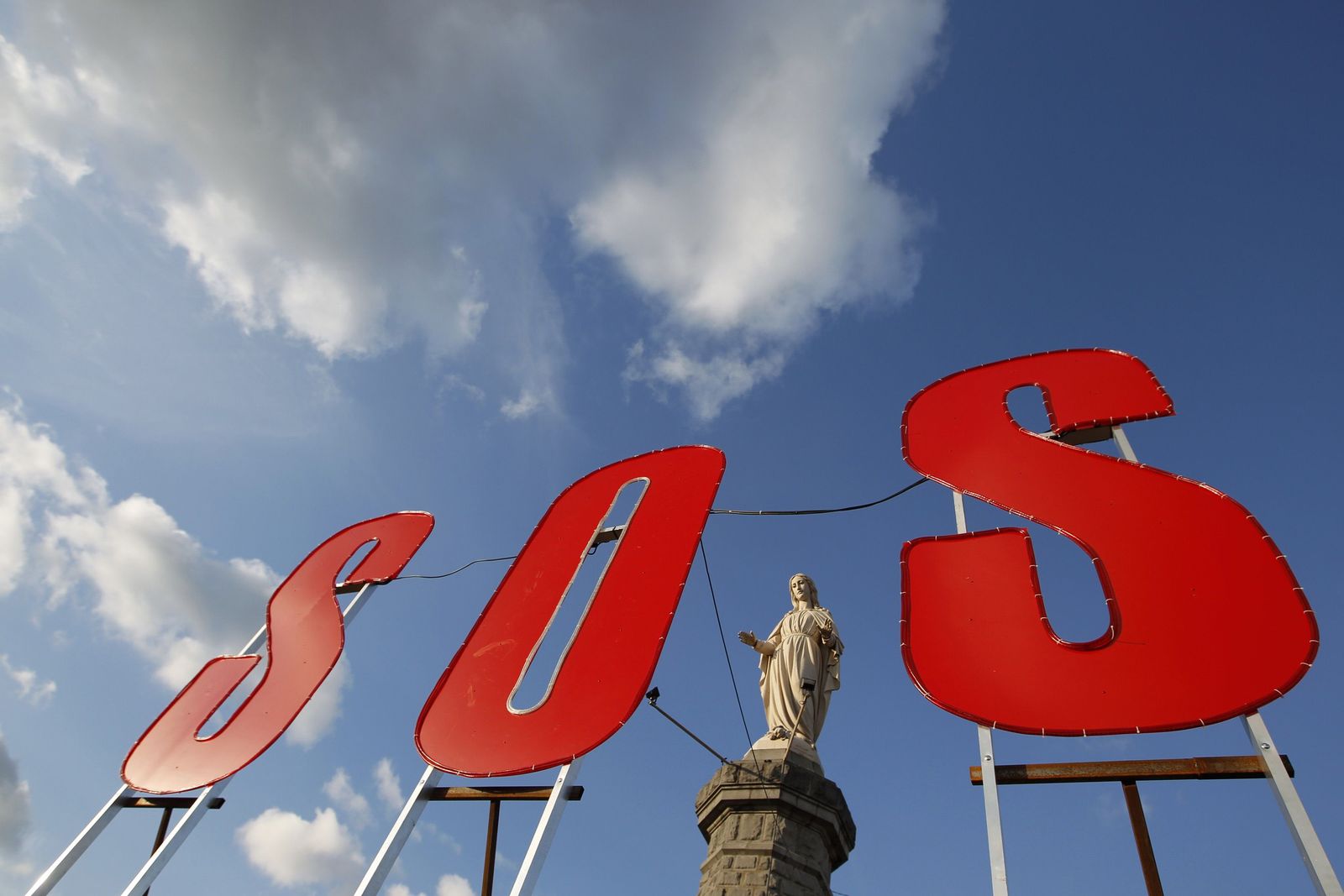 A giant sign reading SOS in front of the statue of the Virgin Mary near an ArcelorMittal blast furnace. The French prime minister withdrew the threat to nationalize Florange, and in return ArcelorMittal agreed to avoid layoffs at the site, although the two blast furnaces will remain shut down.