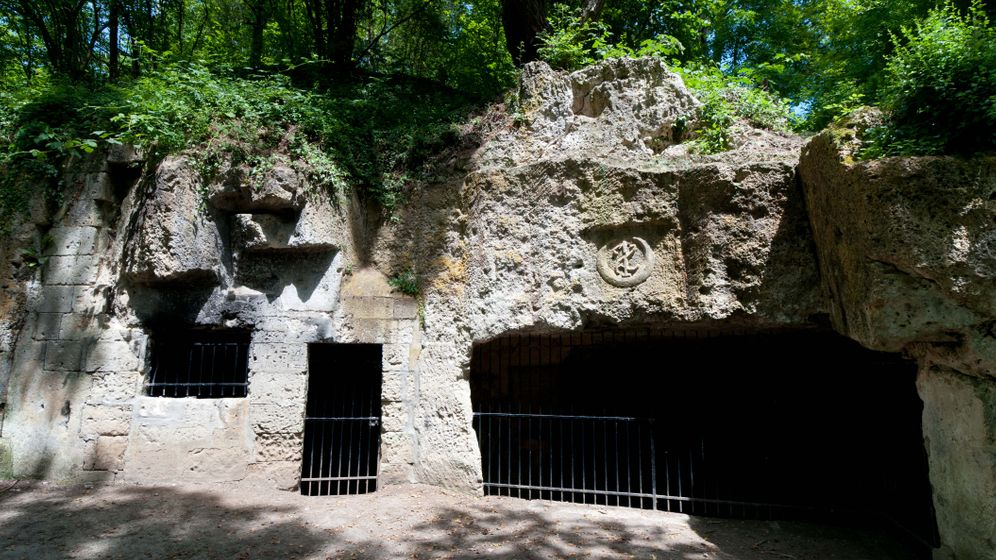 Photo Gallery: The World War I Murals of Confrécourt

Deep in the cool, dank blackness of an underground limestone quarry in northern France stands an altar, carved from the wall by soldiers of the French army who sheltered here during World War I.

The dread they must have felt as they knelt here, under the inscription "Dieu Protege la France!" ("God Save France!"), is hard to imagine. A flight of steps next to the altar led to the trenches of the front line.

"People still come here to pray every Sunday," said Jean-Luc Pamart, a farmer who owns the land around here. "When they kneel here on this earth, the cold rises up their legs, it impregnates them. It gives them a sense of history."

The medieval limestone quarry of Confrécourt, close to the village of Nouvron-Vingré some 50 kilometers (30 miles) northeast of Paris, is a veritable art gallery of murals hewn into the rock by the troops.

There are some 500 such quarries between here and the town of Soissons less than 20 kilometers away, and all have wall carvings, says Pamart, 61, who is campaigning to obtain UNESCO World Heritage Site status for the sites.

In Confrécourt, some murals feature elaborate regimental insignia and patriotic images of Marianne, the emblem of France, as well as warlike declarations such as "Death to the Boches!" -- a reference to German soldiers. Some record the names of dead comrades, while others are personal, such as carvings of loved ones or of everyday objects such as a bottle of pinard (cheap red wine).

One particularly poignant bas-relief is a half-finished image of a woman's face. A pencil sketch is visible on the rock but only part of it has been sculpted. "It makes you wonder what happened to the soldier who started it," Pamart told SPIEGEL ONLINE.

'Tangible Link With The Past'

"The soldiers were artists," said Pamart, explaining that carving the murals and sculptures allowed them to forget the horrors of the war for a while and to leave a trace of themselves for posterity. He feels it is very important to preserve places like these. "They provide a tangible link with the past, and convey some of the thoughts and feelings of the men who had to fight."

In the fields above the quarry, Germans and French faced each other for almost four years in a static war that shaped the 20th century and is synonymous with pointless sacrifice on a staggering scale.

A few hundred meters from here, in the village of Vingré, six soldiers were chosen by lot and executed after commanders decided that their unit hadn't shown enough vigor in a clash with German forces. The case inspired the 1957 Stanley Kubrick film "Paths of Glory."

The remains of hundreds of thousands of French, German and British and Commonwealth solders still lie undiscovered in the soil of the Western front. Dozens of bodies are found each year during ploughing and construction work.

The names of the dead and the missing are recorded on palatial monuments up and down the front that stretched from the North Sea coast to the Swiss border. But the personal artwork left by soldiers in the quarries provides priceless testimony of their creativity and their sentiments, says Pamart. He set up an organization called "Soissonnais 14-18" in 1985 to make an inventory of the bas-reliefs and to fit gates to the entrances to keep out thieves.

The gates are needed. One beautiful bust of Marianne shows deep grooves where someone tried to hack it out of the wall.

"Some of the soldiers were such good sculptors that officers would let them off duty to complete their work," said Pamart.

He played in these quarries when he was a child and frequently found bullets, shrapnel and other metal objects from the war. His interest was fuelled by elderly veterans who occasionally came to visit the area and would ask him about the location of old map references relating to the war.

He didn't know, and set about researching the region's history. He wrote a book about his findings, "Le Paysan des Poilus" ("The Soldiers' Farmer"), which was published in 2008.

German troops used some of the quarries but were less prone to sculpt and preferred to make wall paintings instead. One quarry close to Confrécourt has a detailed German painting of a Minenwerfer, a mortar.

The German approach to bunkers was altogether more functional, said Pamart. "The Germans tended to build concrete blockhouses with running water and electricity while the French improvised, sheltering in these quarries where they spent their spare time carving elaborate murals into the rock."

Farming in this area remains risky due to century-old munitions lurking in the soil. "Last year a farmer was ploughing a field and churned up a gas shell," said Pamart. "He looked around to see a cloud of gas behind him. When that happens, you get away as fast as possible."

A further risk is the close resemblance between potatoes and French World War I grenades. Workers still find live grenades while sorting potatoes at the factory.

"Despite the dangers, we have a duty to cultivate this land," said Pamart. "The soldiers suffered and died for it. It is sacred land."

He says that World War I is still here, and that he is confronted with it every day. "We have a duty to keep its memory alive."

13 Bilder Photo Gallery: The World War I Murals of Confrécourt