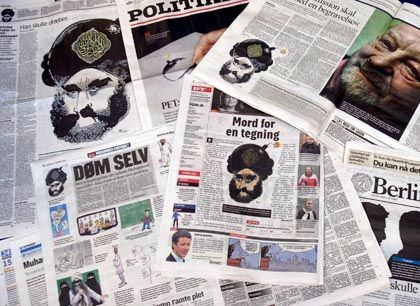 It was hard to read a newspaper in Denmark on Wednesday without seeing the cartoons.

Danish newspapers closed ranks on Wednesday to defend a cartoonist's right to free speech by reprinting 12 caricatures of the Prophet Muhammad that sparked deadly riots in Muslim countries in early 2006. The papers were responding to the arrest in Denmark on Tuesday of three Muslim men who allegedly wanted to kill Kurt Westergaard, the cartoonist who drew the most inflammatory image, showing Muhammed with a bomb-shaped turban.

"We are doing this to document what is at stake in this case," the  Copenhagen paper Berlingske Tidende wrote on Wednesday morning, "and to unambiguously back and support the freedom of speech that we as a newspaper will always defend."

Reaction from Muslim leaders was mixed. "There could have been other ways to do it without the drawing, which I personally do not like," said Abdul Wahid Petersen, a moderate imam, according to the Associated Press.

"We are so unhappy about the cartoon being reprinted," said Imam Mostafa Chendid, head of the Islamic Faith Community, which led Danish protests against the cartoons in 2006. "No blood was ever shed in Denmark because of this, and no blood will be shed. We are trying to calm down people, but let's see what happens. Let's open a dialogue."

But a Muslim politician in Denmark, 44-year-old Naser Khader, told SPIEGEL ONLINE that something palpable had changed in the Danish political climate over the past two years. "Of course there's a fear of a new crisis; Islamists are unpredictable," he said. "And in some Muslim countries the people have not forgotten the Muhammad cartoons."

Khader is the head of a new centrist party called "Ny Alliance." His background is Syrian. He said Muslim leaders as well as Danish society overall seemed more cohesive in their response to the threat of violence: "The Muslims who have made statements since the arrests yesterday have spoken very moderately." In fact, he said, "The great majority of Danish Muslims have shown that they reject violence and live in harmony with Danish law." And the results have been good, judging from a recent poll that shows overall public opinion of Muslims in Denmark has changed for the better in the last two years.

"The crisis didn't hurt integration," said Khader, "it opened doors for us -- and in Denmark things have improved quite a bit in the meantime."

This position chimes with a SPIEGEL ONLINE interview published Tuesday with the editor of Jyllands-Posten, the paper that first published the Muhammad cartoons in late 2005. Flemming Rose, who commissioned the cartoons, said the debate over integration in Denmark is "far more fact-based than it used to be."