The shock announcement by Greek Prime Minister Giorgios Papandreou of a referendum on the Greek bailout has thrown efforts to rescue the single currency into doubt, unsettled global markets and angered EU leaders just days after they agreed a wide-ranging package to contain the debt crisis.

Global stock markets fell on the news. German and French stock indices were down more than 3 percent on Tuesday, with banking shares among the main losers. The UK FTSE index slid 2.5 percent. The euro was down over 1.3 percent from Monday at $1.3735 in late morning trading.

Shares in Commerzbank, Germany's second largest bank, slumped more than 10 percent and Deutsche Bank, the country's top bank, fell almost 8 percent. One economist at Bremer Landesbank said a Greek rejection of the euro zone's plan to provide Athens with €130 billion ($178 billion) worth of aid and arrange a 50-percent write-down on its debt would be "suicide."

Papandreou, whose Socialist party has been hit by defections as it defied waves of at-times violent public protests and strikes to impose austerity measures demanded by international lenders, said he needed broader political support for the measures.

There are big doubts whether Greeks will back the bailout. A survey carried out on Saturday showed that nearly 60 percent viewed the agreement on the bailout package as negative or probably negative.

A senior member of German Chancellor Angela Merkel's center-right coalition said on Tuesday he was "irritated" by Papandreou's announcement. "This sounds to me like someone is trying to wriggle out of what one has agreed to," Rainer Brüderle, parliamentary floor leader for Merkel's junior coalition partners, the Free Democrats, told Deutschlandfunk radio.

"It's a strange thing to do but all you can do is take precautionary steps in case there is a state insolvency in Greece -- because if they don't meet the conditions as agreed, then the point will be reached at which there won't be any money anymore, as I see it, then you have a state bankruptcy."

The German government appears to have been taken by surprise by the announcement. The Finance Ministry said in a statement on Monday night that the referendum decision was a "domestic political development in Greece about which the German government has no official information yet and on which it therefore won't comment."

'A Vote on Euro Membership'

Finland's Minister for Europe, Alexander Stubb, said a referendum would effectively amount to a vote on Greece remaining a member of the euro zone. "The situation is so tense that it would in principle be a vote on euro membership," Stubb said in a TV interview on Tuesday.

Swedish Foreign Minister Carl Bildt said in a message posted on Twitter: "I truly fail to understand what Greece intendes to have a referendum about. Are there any real options?"

The referendum raises the possibility not only of a disorderly Greek default if voters reject the plan, but also of the crisis engulfing much bigger economies such as Italy.

As the vote isn't expected to be held until January, Europe faces at least two months of uncertainty over the debt crisis -- a major disappointment after last week's EU emergency summits had restored a measure of calm in financial markets. Hopes for a year-end rally have been dashed.

The new uncertainty is likely to be an embarrassment for EU leaders ahead of the G-20 summit of top industrial and emerging economies in France on Nov. 3 and 4. They had hoped to use the gathering to persuade nations such as China and Brazil to commit funding to the enhanced euro zone rescue fund, or European Financial Stability Facility, to help ailing nations get through the crisis.

In Greece, opposition parties criticized Papandreou for calling the referendum. "I never expected Papandreou to take such a dangerous and frivolous decision," said Dora Bakoyanni, former foreign minister and leader of the small center-right Democratic Alliance party. "All the international media will say that Greece itself is putting the EU deal at risk."

Conservative leader Antonis Samaras, head of the New Democracy party has demanded new elections in the wake of Papandreou's announcement. "Elections are a national necessity," he said. 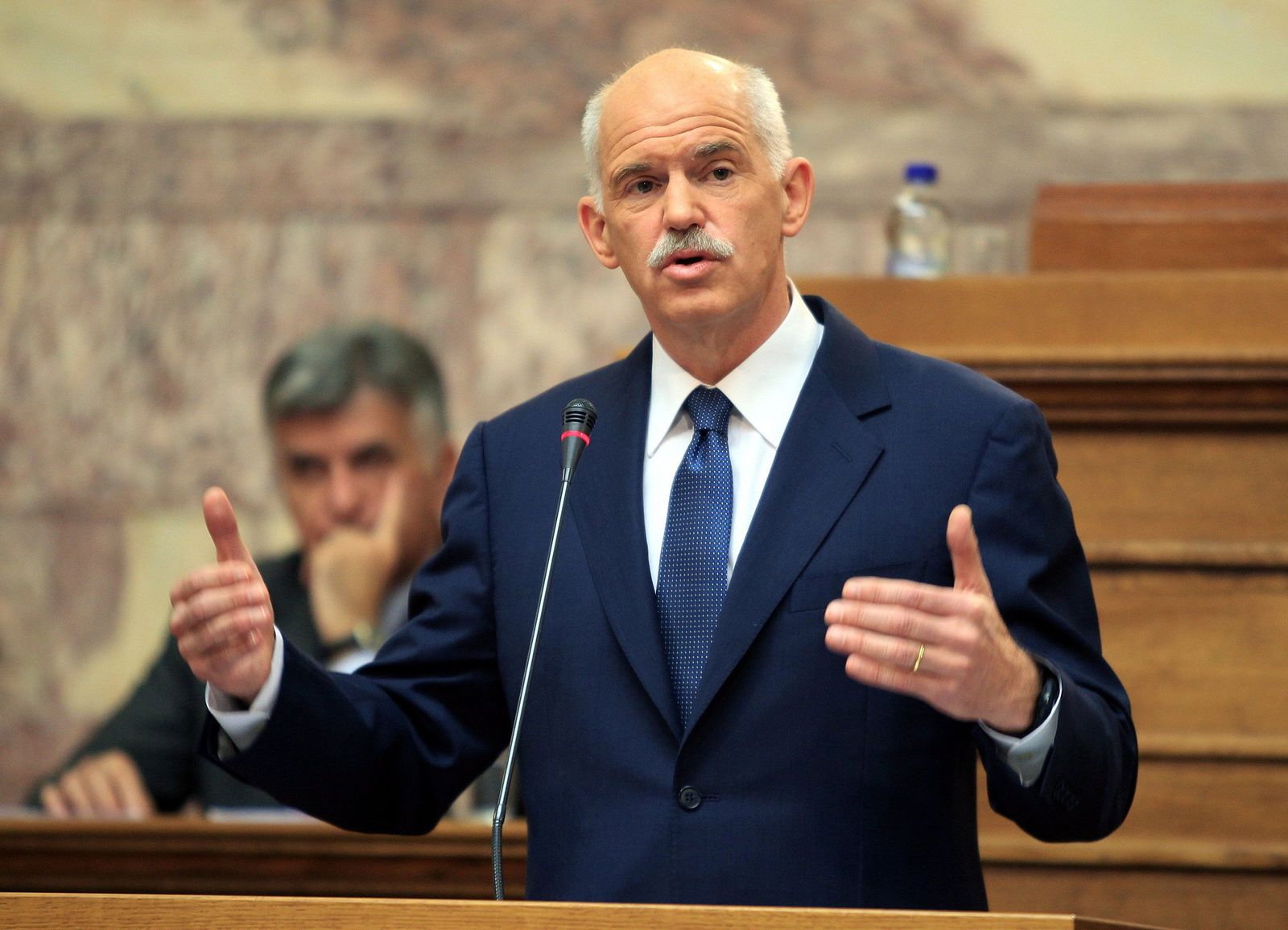