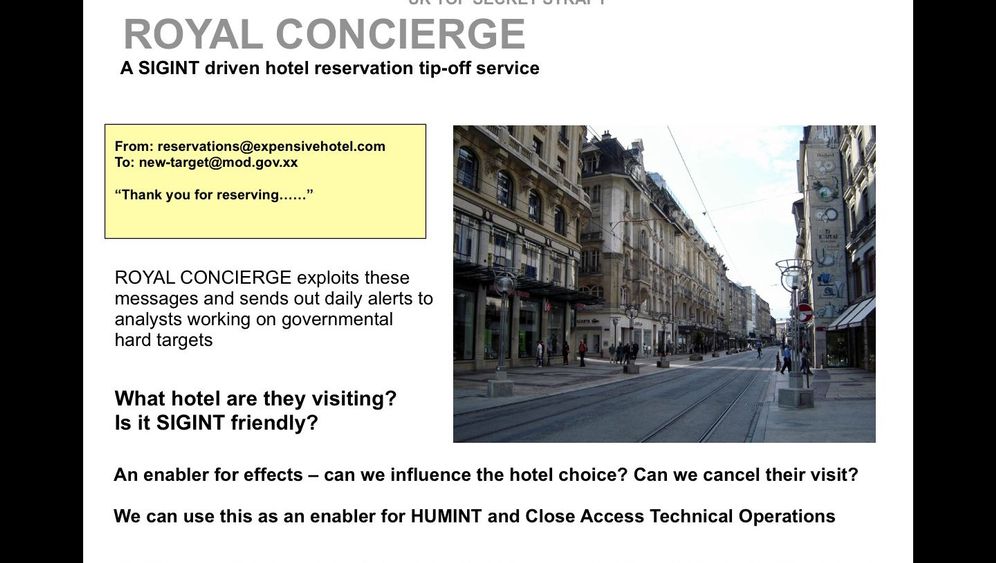 When diplomats travel to international summits, consultations and negotiations on behalf of governments, they generally tend to spend the night at high-end hotels. When they check-in, in addition to a comfortable room, they sometimes get a very unique form of room service that they did not order: a thorough monitoring by the British Government Communications Headquarters, or GCHQ in short.

Intelligence service documents from the archive of NSA whistleblower Edward Snowden show that, for more than three years, GCHQ has had a system to automatically monitor hotel bookings of at least 350 upscale hotels around the world in order to target, search and analyze reservations to detect diplomats and government officials.

The top secret program carries the codename "Royal Concierge," and has a logo showing a penguin wearing a crown, a purple cape and holding a wand. The penguin is apparently meant to symbolize the black and white uniform worn by staff at luxury hotels.

The aim of the program is to inform GCHQ, at the time of the booking, of the city and hotel a foreign diplomat intends to visit. This enables the "technical operations community" to make the necessary preparations in a timely manner, the secret documents state. The documents cast doubt on the truthfulness of claims made last week to a committee in parliament by the heads of the three British intelligence agencies: Namely that the exclusive reason and purpose behind their efforts is the battle against terrorism, and to make sure they can monitor the latest postings by al-Qaida and similar entities.

The documents show that the prototype of "Royal Concierge" was first tested in 2010. The much-touted program, referred to internally as an "innovation," was apparently so successful that further development continued.

The documents provide details on how the British program for tracking international diplomats functioned. Whenever a reservation confirmation is emailed to a conspicuous address inside a government domain (like gov.xx) from any of the 350 hotels around the world being monitored, a daily alert "tip-off" is sent to the appropriate GCHQ analysts. The documents seen by SPIEGEL do not include hotel names, but they do cite anonymized hotels in Zurich and Singapore as examples.

A further document states that this advance knowledge of which foreign diplomats will be staying in what hotels provides GCHQ with a whole palette of intelligence capabilities and options. The documents reveal an impressive listing of capabilities for monitoring a hotel room and its temporary resident that seem to exhaust the creative potential of modern spying. Among the possibilities, of course, are wiretapping the room telephone and fax machine as well as the monitoring of computers hooked up to the hotel network ("computer network exploitation").

It also states that a "Technical Attack" is deployed by the British "TECA" team for guests of high interest. The documents state that these elite units develop a range of "specialist technologies" that are "designed to bridge the gaps to communications that our conventional accesses cannot reach." These "Active Approach Teams" are small, but possess advanced technical skill that allow them to work within "often unique requirements."

The guests, of course, have no clue about these advanced technical preparations that are made for their visits. In cases of "governmental hard targets," the information obtained through "Royal Concierge" can also involve "Humint" operations. The abbreviation is short for "human intelligence" -- in other words, the deployment of human spies who might then be listening in on a diplomat's conversations at the hotel bar.

The documents seen by SPIEGEL do not state how often the program has been used, but they do indicate that it continued to be developed and that it captured the imagination of the intelligence agency's workers, including the GCHQ unit responsible for "effects." Given the access they had to hotel bookings through "Royal Concierge," one document pondered: "Can we influence the hotel choice?" And: Did they have the ability to cancel visits entirely? Another slide lists "car hire" as one of the possible extensions to the program.

Contacted by SPIEGEL, GCHQ said that it "neither confirms nor denies the allegation."

Her Royal Majesty's agents appear to be very conscious of the fact that the automated monitoring of diplomats' travel by the British intelligence service crosses into controversial terrain. One of the presentations describing "Royal Concierge" is titled "Tales from the Wild, Wild West of GCHQ Operational Datamining."