Marina Pepper has just been panhandled by a homeless man near London's Liverpool Street Station. She reaches into her handbag and grabs a bundle of £20 notes. "Here, you can give them out," she says. The homeless man looks perplexed at the notes, not knowing whether he should take this as a good or bad thing. 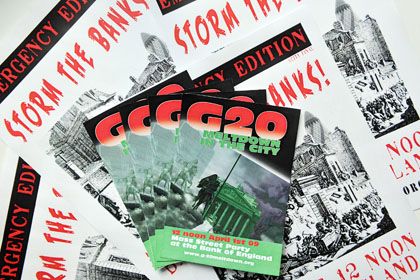 It's funny money with the words "G-20 Meltdown" printed on it. They're flyers for a "Party in the City." Pepper gets the homeless man to agree to come the event next Wednesday and to bring along as many of his buddies as he can. Another homeless man just a few meters away experiences the same fate.

Pepper, 41, is responsible for organizing "G-20 Meltdown," a coalition of groups that plan to protest against the London financial summit next week that has even earned the respect of Scotland Yard. "They have some very clever people and their intention on April 1 is to stop the City," Commander Bob Broadhurst of the Metropolitan Police said last week. "They are innovative and we have to be innovative, too."

The policeman's concerns put a smile on Pepper's face. She's delighted by the idea of a cat and mouse chase through this city of more than 7.5 million people. "It's all a question of numbers," she says. Five-thousand police officers will be deployed, many in combat gear. It's the largest police operation the city has seen in 10 years. But there are doubts about whether that will be enough. Police will have to provide security for 22 world leaders, including the United States president, and 40 motorcades will have to be directed through the streets of London. In addition, dozens of embassies and hotels will have to be guarded, the conference center has to be sealed off from the public and the banks in the city's financial district will also have to be guarded from potentially violent anarchist protestors.

It's a mission with an incalculable outcome -- after all, nobody knows how many people will actually turn up. Current estimates put the figure at about 3,000. That may not be a huge figure, but with technologies like Twitter and mobile phone text messaging, the demonstrators have become dangerously mobile. For weeks, protesters have been discussing possible locations for their actions in Internet forums and they have also leaked out names to the public. The idea is to send out decoys to throw police off, so that they focus their efforts on the wrong people.

'In Emergencies, the English Make Tea'

The G-20 summit is scheduled to take place on April 2 at the Excel Center conference facility in east London's Docklands area. The first anti-summit protest is expected to take place on Saturday. Over 100 non-profit organizations and labor unions have called a protest march. But the most creative event will take place on April 1. At 11 a.m., parade floats will depart from four different Underground stations and head towards the financial district before forming a cross in front of the Bank of England, where a "Bankers Banquet" is planned.

"It will be very funny and very English," Pepper promises. She says she'll be schlepping an old copper kettle along to the picnic. "In emergencies, the English make tea," she explains.

Climate change activists in London, who tend to spend their time fighting against the expansion of the city's airports, want to create a 24-hour "Climate Camp" tent city in front of the European Climate Exchange on Liverpool Street. At the same time, a giant iceberg is going to be placed in front of the Excel Center that will slowly melt.

Another action is planned in front of the Royal Bank of Scotland, the financial institution that has so far cost British taxpayers the most money. Another march will be directed towards the US Embassy. Meanwhile, G-20 critics will hold a shadow summit at the University of East London near the conference center. On April 2, the plan is to get as close to the Excel Center as they possibly can -- though with massive security measures in place, protesters are unlikely to get too far.

Anarchist Groups Gear Up for Violence

Police and activists agree that they have never seen so many groups planning to take to the streets. Most of them will stage peaceful demonstrations, often with a political message about climate change (as environmentalists struggle to keep the issue on the agenda despite the financial crisis).

But militants, on the other hand, are gearing up for a "summer of anger." Police fears were vindicated when, on Tuesday night, vandals attacked the Edinburgh villa of former Bank of Scotland chief Fred Goodwin, breaking windows and damaging his Mercedes.

A blog by the self-declared anarchist Ian Bone celebrated the attack with the headline "Fat Cats in Terror across Europe." He called for a "bold and resolute anarchist bloc at Saturday's march" and ended with the rallying cry: "Your class needs you -- be there!"

In February, the group "Government of the Dead" publicly hung a puppet of a banker. Meanwhile, Bone's anarchist troop "Class War" harbors its own fantasies of violence. A recent edition of their newspaper called for the burning of bankers. The current edition has the slogan "Ready to Riot" above a picture of Fred Goodwin's head on the guillotine.

There is a chance this will all turn out to be empty rhetoric. But in the City of London the business community is worried. Industry organizations like the Chamber of Commerce are recommending that members leave their suits and ties at home to avoid provoking the demonstrators. Leading banks like the Royal Bank of Scotland and UBS have told their employees to work from home wherever possible and postpone meetings.

The financial district has witnessed a string of protests in recent months -- but none of them turned violent. This time round, organizers are also urging that the demonstration should be peaceful. Their aim could be aided by "protest tourists" staying at home. Activists from France and Germany will likely converge on the NATO summit in Strasburg, where Obama is expected on April 3.

Initiated into the Protest Culture

But even without an influx of visitors, there is enough simmering anger in London. The mood is very different from the G-8 summit at Gleneagles in Scotland, Pepper says. During the boom years street protests were not popular but in this crisis new generations are being initiated into the protest culture. And while there will be the usual civil disodience, there are also ideas like pouring sand onto the streets and allowing kids to play there.

Ironically the G-20 gathering is the first in generations to try to restrain global capitalism with rules and regulations. Protesters, in theory, could take comfort that some of their old demands are now being tackled. At the same time, the exclusive G-8 gang is, in effect, consigned to history and developing countries are joining the debate. Former taboo subjects like tax havens and banker bonuses are among the topics to be discussed.

But the coalition of protesters still see the event as the "biggest April Fool's Joke of all time," according to their Web site. In their eyes, this summit will be mostly about saving the banks. They want to articulate the widespread resentment that tax payers are having to pick up the tab for the City's reckless gambling.

They will probably achieve their goal of immobilizing the whole financial district -- not least because of the logistics of the G-20 itself. There will be severe traffic blockages due to the 40 delegations driving from the embassies to the conference center in the east of the city. Demonstrators also plan to indirectly recruit the police to help hinder the opening of the London Stock Exchange on April 2. "All you have to do is announce you are planning something and they start building up a ring of defense around the building," Pepper said.