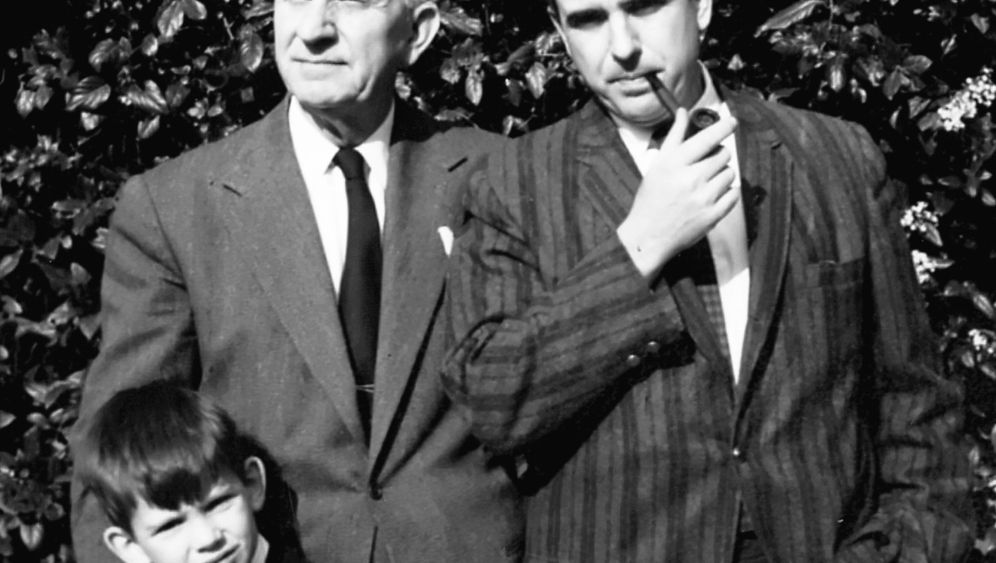 Photo Gallery: The Families Who Pushed Greece to the Brink

The queue of hungry people snaked across the courtyard and into the street at the homeless shelter behind Omonoia Square in Athens last Thursday, just as it does every day at lunchtime. The retired, the unemployed, mothers with children, immigrants; they were all waiting patiently for church members to press something to eat into their hands.

Georgios Levedogiannis, 38, managed to get his hands on some peas with root vegetables and potatoes, along with three hunks of bread and a few cups of yoghurt. Levedogiannis has been coming here regularly for nine months. "I have to, in order to survive," he says.

Levedogiannis worked in security at Athens Airport for seven years. He wasn't rich, but he got by -- until his bosses fired him in 2009. At the moment, his poverty is not yet visible. Levedogiannis wears a clean shirt, smart blue slacks and a new-looking bag slung around his waist. He clearly makes an effort. But there are tears in the man's eyes as he says: "If I had work, I wouldn't do this to myself." He says he has "zero" money and that he sleeps at the Red Cross, eats at the church and dreams of a different time, a time where there was still work. "If you don't have connections, no one will take you," he explains. "And it's only getting worse."

Nearly all of Greece's 400 church districts have started distributing food to the poor, including at Omonoia Square. "The number of needy is increasing rapidly," says one helper there, "and we don't know whether the end is even in sight."

In fact, it probably isn't. Last Wednesday, the governing Socialists passed a massive austerity package in parliament by a slim majority, despite intense protests. The decision paves the way for the next round of emergency loans from the EU and the International Monetary Fund (IMF). Without this €12 billion ($17 billion), Athens would default on its debt within two weeks.

George Provopoulos, governor of the Bank of Greece, believes torpedoing the austerity package, as the country's conservative opposition tried, would have been "suicide." Still, Provopoulos also believes Greece has "reached the limit" and that it would be impossible to squeeze any more out of the people.

In remarks to the conservative newspaper Kathimerini, he spoke about what he saw as the root cause of the crisis. "There is little doubt that the failings of (the existing social and political) system hindered the implementation of policies that would have averted the existing ills," he said. "We are paying the price of past mistakes."

The emergency financing will help Greece through the next months and it will buy the rest of the EU some time -- time in which the euro crisis may ease somewhat. But it's unlikely that it can save Greece. The last few decades have seen an elite, with the Papandreou, Karamanlis and Mitsotakis families at its core, establish a system of economic patronage. They threw around billions the government didn't actually have and showered friends and relatives with prosperity that was all based on credit. These leaders bloated their country's administration so that everyone could have a piece, and created a bureaucratic monster in the process.

The political parties' business dealings were always more about favors than policies. Anyone with access to public funds used them to buy friends and voters, who were then beholden to the party -- and to the family running it. The result for Greece has been a feudal democracy, where the generations come and go, but the names remain the same: Papandreou and Karamanlis and Karamanlis and Papandreou, with a Mitsotakis thrown in every now and then. No other European democracy has seen the like.

Meanwhile, the parties' feudal princes accustomed their people to living beyond their own means. Greece, with its 11 million inhabitants, is a poor country at the far edge of the EU that has olive trees, blue skies, beaches and not much else. One in four people who work, do so for the government. It's the source everyone wants to tap.

With political parties fleecing the nation wholesale, the people also grabbed whatever they could. The rich evaded taxes to the tune of billions, the poor scraped by with under-the-counter work and public officials opened their doors to bribery.

Now Prime Minister Georgios Papandreou has to fix what his father helped to create, a system in which people could retire earlier and work less.

The time has come for drastic measures, the younger Papandreou believes. "Either we change, or we all go down together," the prime minister has said. He's perfectly well aware, though, of just what has been going wrong for decades.

Papandreou's grandfather, who was also called Georgios, founded the family's political dynasty, serving first in various ministerial positions and later as prime minister. After the 1967-1974 military dictatorship, Georgios' son Andreas Papandreou created the socialist party PASOK. In the 1980s, he gave so much to his cronies and supporters that the country's debt ballooned.

Greece's conservatives, meanwhile, were led more by a clique than a family, and they alternated with the Papandreous for turns at the helm. Konstantinos Karamanlis, the family patriarch, held office multiple times before his nephew, also Konstantinos, or Kostas, took over. Occasionally there was also a bit of room at the top for the Mitsotakis family. Konstantinos Mitsotakis served as prime minister and, more importantly, has maintained a position as the most powerful man in the New Democracy party for two decades.

In his 2004 election campaign, the younger Karamanlis promised to reform the country. After his win, though, the scandals began to pile up, with billion-euro property deals and money shifted out of retirement funds. Karamanlis' people falsified the financial data reported to the EU, and shortly before being voted out of office, quickly created tens of thousands of administrative posts for relatives and friends of the party. By the end of their term, the conservatives had doubled the national deficit.

EU Feels Lucky to Have Papandreou

Mitsotakis' daughter Dora Bakoyannis, foreign minister at the time, then tried to take over leadership of New Democracy. Antonis Samaras managed to squeeze her out to become the party's leader -- with the elder Mitsotakis still performing the function of honorary leader.

Samaras, like Papandreou a wealthy member of the upper class, is now the prime minister's opponent. He is a tough rival who's not afraid to use whatever tactics necessary. The two men are on familiar terms, though, having shared a student apartment in the US in the 1970s.

EU financial policymakers consider themselves lucky to have Papandreou, who's trying to cut costs. Samaras, on the other hand, is promising voters to lower taxes and drive a hard bargain with the EU over austerity measures.

While Papandreou's standing with the public has fallen rapidly in the past few weeks and his PASOK party has slumped to 27 percent in the polls, its lowest rating in 34 years, Samaras' New Democracy has held steady at 31 percent. That was enough to rank the party as the most popular in the eyes of voters in mid-June, but was still 2.5 percent less than its results in the 2009 parliamentary elections.

About three weeks ago, Papandreou gave his conservative opponent a call, wondering if the two battered parties couldn't work together to save the country, in a grand coalition. Papandreou suggested he would even be willing to make the post of prime minister available.

The conversation was supposed to remain confidential, but Samaras alerted journalists. He then embarrassed Papandreou in parliament again shortly afterwards, making it clear that he wasn't interested in a consensus government.

Regardless of whether it happens under Papandreou alone or with both politicians working together, if Greece starts economizing, it risks choking its own economy. "It's like a cat chasing its own tail," says Greek economics professor Yanis Varoufakis.

Former IMF chief economist Kenneth Rogoff recently warned: "If they just continue with the European Union's austerity program, they're going to be in slow growth or recession as far as the eye can see, and at the end of the day they're still going to default."

And it's not as if Greece hasn't already adopted austerity measures. Athens managed to cut its budget deficit from 15.4 percent of its gross domestic product to 10.6 percent last year, thanks to its first austerity package. The government made cutbacks in salaries, retirement funds and social benefits, among other things.

This austerity policy also caused 200,000 people to lose their jobs last year, with unemployment reaching an all-time high of 15 percent by late March.

With pay in the private sector also often falling by 10 to 20 percent, consumption likewise dropped by nearly 10 percent and the recession intensified. It's a vicious circle. Since taxes need to increase and spending needs to decrease, the situation is likely only to get worse.

The austerity package approved last week certainly envisions plenty of tax increases and spending cuts. There's a solidarity tax for everyone, and property taxes will go up. The government has also finally pledged to take more effective action against tax evaders, although no one knows precisely how.

The package includes cutting around 150,000 public sector jobs by 2015, with the sale of state-owned assets bringing in a further €50 billion. The only problem is that many of those assets will prove difficult to sell. They include run-down Olympic stadiums and four aged Airbuses, although the government also holds thousands of square kilometers of land, some of it in prime coastal locations.

The state will also offer up to 17 percent of the utility company PPC, currently 51 percent government owned, to private investors. This is despite bitter opposition from the union, which is right to anticipate that the sale would mean layoffs among the current workforce of 21,500. During the parliamentary vote on Wednesday, the lights went off in several regions of Greece as a sign of protest.

Economics professor Georgios Argitis from Athens University sounds disdainful as he talks about the "ruling class of politics and capital that made the country its prey" and caused this mess. Contentious best-selling author Petros Markaris derides the "ailing state apparatus." Its representatives "have only one interest, namely maintaining their privileges," he says. "They don't give a damn about anything else."

He's referring, for example, to the parliament employees who still draw 14 months' salary each year, with an additional two on top of that. He's referring to the land of plenty that is the public sector, where politicians provide for those who have helped them, fathers for their family members and agency heads for their personal favorites.

Each new government which has taken office in Greece has hired thousands of officials and employees, without firing the old ones. No one was bothered by this, as long as each person's own job prospects remained good.

Now, though, people are rejecting the entire political elite. This May, 71 percent of Greeks said they didn't have confidence in their government, while 76 percent had just as little confidence in the opposition.