SPIEGEL ONLINE: In Germany, once the motor of European integration, people are openly discussing the possibility of leaving the euro zone. Many Germans believe that a return to the deutschmark would be cheaper than to remain stuck in a flawed currency union. Are they right?

Soros: There is no question that a breakup of the euro would be very damaging, very costly, both financially and politically. And the biggest loss would be incurred by Germany. Germans have to bear in mind that, effectively, they have suffered practically no losses so far. Transfers have all been in the form of loans, and it is only when the loans are not repaid that real losses will be incurred.

SPIEGEL ONLINE: In surveys, though, most Germans no longer believe that loans granted to Greece or other nations will ever be repaid. They worry that Germany is simply on the hook for the rest of Europe.

Soros: But that would be the case only if the euro broke up. We have witnessed a tremendous capital flight, not only from Greece but also from Italy and Spain. All those transfers would result in claims by the banks of the creditor countries against the central banks of the debtor countries in the Euroclear System, the TARGET 2. I believe that claims by the Bundesbank will exceed a trillion euros by the end of this year.

SPIEGEL ONLINE: Should the euro zone collapse, these claims could become virtually worthless. Is Chancellor Angela Merkel just bluffing when she flirts with the idea of a German euro-zone exit?

Soros: Germany could leave, but it would be incredibly costly. I just read the report of the German Finance Ministry, which estimates the costs of a euro-zone exit in terms of employment and economic activity, both of which are real. Because this is the case, Germany will always do the minimum to preserve the euro. Doing the minimum, though, will perpetuate the situation where the debtor countries in Europe have to pay tremendous premiums to refinance their debt. The result will be a Europe in which Germany is seen as an imperial power that will not be loved and admired by the rest of Europe -- but hated and resisted, because it will perceived as an oppressive power.

SPIEGEL ONLINE: Why should Germany carry all the blame? After all, other EU nations shied away from necessary structural reforms and lived beyond their means.

Soros: There is no doubt that the countries that now have a very large debt have not introduced the kind of structural reforms that Germany did and are therefore at a disadvantage. But the problem is that this disadvantage is becoming even more pronounced through the punitive policies in place now. Italy currently has to spend 6 percent of its GDP every year just to stay even with Germany because it has to pay so much more to refinance its debt. There is no way, with that handicap, that Italy can close the competitiveness gap with Germany.

SPIEGEL ONLINE: Once again: How is that Germany's fault?

Soros: This is the joint responsibility of everyone who was involved in the introduction of the euro without understanding the consequences. When the euro was introduced, the regulators allowed banks to buy unlimited amounts of government bonds without setting aside any equity capital. And the European Central Bank discounted all government bonds on equal terms. So commercial banks found it advantageous to accumulate the bonds of the weaker countries to earn a few extra basis points.

SPIEGEL ONLINE: And that then dragged down interest rates?

Soros: Yes. The lower interest rates fueled housing and consumption booms in countries such as Spain and Ireland. At the same time, Germany, struggling with the burdens of reunification, tightened its belt and became more competitive. All this led to a wide divergence in economic performance. Europe became divided into creditor and debtor countries. All these conditions were created by European authorities, including the European Central Bank, which was largely modeled after the Bundesbank. Germans tend to forget now that the euro was largely a Franco-German creation. No country has benefited more from the euro than Germany, both politically and economically. Therefore what has happened as a result of the introduction of the euro is largely Germany's Schuld -- its responsibility.

SPIEGEL ONLINE: Germans remember the birth of the euro very differently. They felt they had to give up the deutschmark in order to get other European Union nations to agree to German reunification.

Soros: True. The integration of Europe was very much led by a Germany that was always willing to pay a little bit extra to reach a compromise that everybody accepted, because Germany was so eager to get European support for reunification. That was called the "farsighted vision," which created the European Union.

SPIEGEL ONLINE: Do we need a similar vision today?

Soros: I want to draw the parallel between what is happening with the euro zone right now, and what happened after World War II, when the Bretton Woods system of monetary management was created to govern the global economy. Then, America became the center of this system, and the dollar became the dominant global currency. It was a free world dominated by America. But America earned that position by providing huge funds for the reconstruction of Europe through the Marshall Plan. America became a benevolent imperial power, which greatly benefited America.

SPIEGEL ONLINE: How can that situation be compared to the one in which we find ourselves today?

Soros: Germany is in a similar position today, but it is not willing to engage in anything like the Marshall Plan. It is opposed to any transfer union for the rest of Europe.

SPIEGEL ONLINE: The Marshall Plan, though significant, amounted to just a small share of the US gross domestic product. The potential payouts related to a euro rescue program, on the other hand, might be more than Germany can handle.

Soros: Nonsense. The more comprehensive and convincing a debt reduction program is, the less likely it is to fail. And remember, just as Germany is grateful to America for the Marshall Plan, Italy would be grateful to Germany for helping it lower its refinancing costs. If it did that, Germany could set the conditions. And Italy would be happy to meet those conditions, because it would benefit from it. Not to recognize this opportunity is a tragic, historical mistake by the Germans.

SPIEGEL ONLINE: Why did Americans support the Marshall Plan then while Germans now back Merkel's tough push for austerity?

SPIEGEL ONLINE: It is precisely that prosperity that Germans are fearful of losing.

Soros: The German position is simply short-sighted. Currently, there is no sign of a crisis in Germany. But if the euro crisis is not resolved quickly, Germany will very soon begin to feel the global decline in economic activity.

SPIEGEL ONLINE: You said a few weeks ago that there were only three months left to overhaul the structure of the currency union.

Soros: Well, we are down to three days now.

Soros: Europe's leaders need to take bold steps at the EU summit on Thursday and Friday.

SPIEGEL ONLINE: Do you think Angela Merkel is prepared to take such steps?

Soros: She is trapped. Merkel has realized that the euro is not working, but she cannot change the narrative she has created because that narrative has caught the imagination of the German public, and the German public has accepted it.

Soros: Right. But at the same time, Chancellor Merkel realizes that what is happening is not working, and so she is determined to preserve the euro.

SPIEGEL ONLINE: German Finance Minister Wolfgang Schäuble gave an interview to SPIEGEL saying that now is the time for bold steps. He outlined ideas for a closer political union in Europe.

Soros: Schäuble is representative of the Germany of Helmut Kohl. He is the last European standing, and he is a tragic figure, because he understands what needs to be done, but he also realizes the obstacles that stand in the way, and he cannot find a way to overcome these obstacles. So he is really suffering.

SPIEGEL ONLINE: What would be your advice to Minister Schäuble?

Soros: The key problem is the debt restructuring in the euro zone. As long as the debt burden is not reduced, there is no chance of the weaker EU countries regaining competitiveness.

SPIEGEL ONLINE: How could that be achieved?

Soros: I propose a European Fiscal Authority which, in partnership with the European Central Bank (ECB), can do what the ECB cannot do on its own. It could establish a Debt Reduction Fund, similar to that proposed by Chancellor Merkel's Council of Economic Advisors and endorsed by the Social Democrats and the Greens. In return for Italy and Spain undertaking specified structural reforms, the Fund would acquire and hold a significant portion of their outstanding stock of debt.

SPIEGEL ONLINE: And where should the money come from to buy up these sovereign bonds?

Soros: The Fund would finance the purchases by issuing European Treasury Bills (eds. Note: a variation on Euro Bonds but with a shorter maturity period) -- a joint obligation of the member countries -- and pass on the benefit of cheap financing to the countries concerned. Such a step would create a more level playing field, because Italy would be able to finance half its debt at 1 percent and the other half would also come down. It would provide real relief to Italy and Spain.

SPIEGEL ONLINE: And once crisis-stricken countries feel that relief, they would cease implementing tougher reforms.

Soros: Quite to the contrary: Reforms would become much easier. It is all about incentives. In the case of Italy, the administration of Prime Minister Mario Monti would like to have much stronger labor market reforms than it is able to push through. If there was a reward of being able to refinance your debt at 1 percent, Monti could push such reforms through.

SPIEGEL ONLINE: But what would happen, for example, should there be a change in government, with the new leaders unwilling to pursue such reforms?

Soros: Then you simply withdraw the concession and suddenly, instead of being able to borrow at 1 percent, the government has to go to the market. And the market is going to punish you. No government could do that without having to pay a heavy price for it.

SPIEGEL ONLINE: But that would push Italy into bankruptcy, a nuclear option that European authorities would never dare to detonate.

Soros: You could adjust the punishment to fit the infraction. Even a small fine would be enough to bring an errant government to heel.

SPIEGEL ONLINE: Could such a plan help Greece remain in the euro zone as well?

Soros: Unlikely. Rescuing Greece would require an enormous kind of magnanimity and generosity. The situation there has simply become too poisoned. I think that by standing firm and not compromising on Greece, Angela Merkel would be in a better position to persuade the German public to be more generous toward other nations and distinguish between the good guys and bad guys in Europe.

SPIEGEL ONLINE: Would you agree with Merkel's statement that Europe will fail if the euro fails?

Soros: Yes. Because in the long run, you cannot have a common market without a common currency.

SPIEGEL ONLINE: If you were still an active investor, would you be tempted to make massive bets against the euro?

Soros: As an investor, I would be very pessimistic, especially about Europe. But as a believer in an open society, I have to put my faith in the people and leaders of Europe to show some reason. 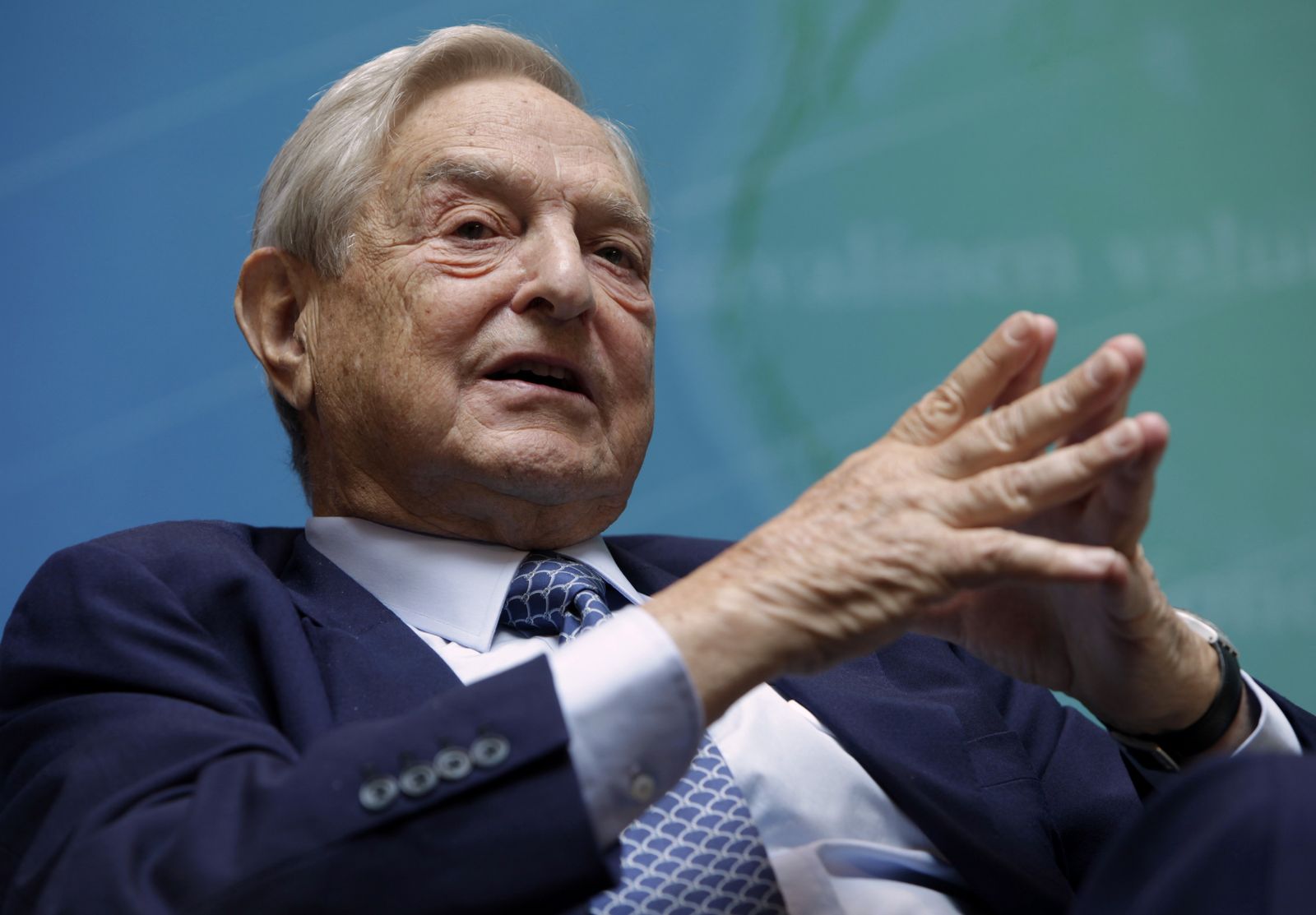 Billionaire investor George Soros: "We are down to three days" to save the euro.