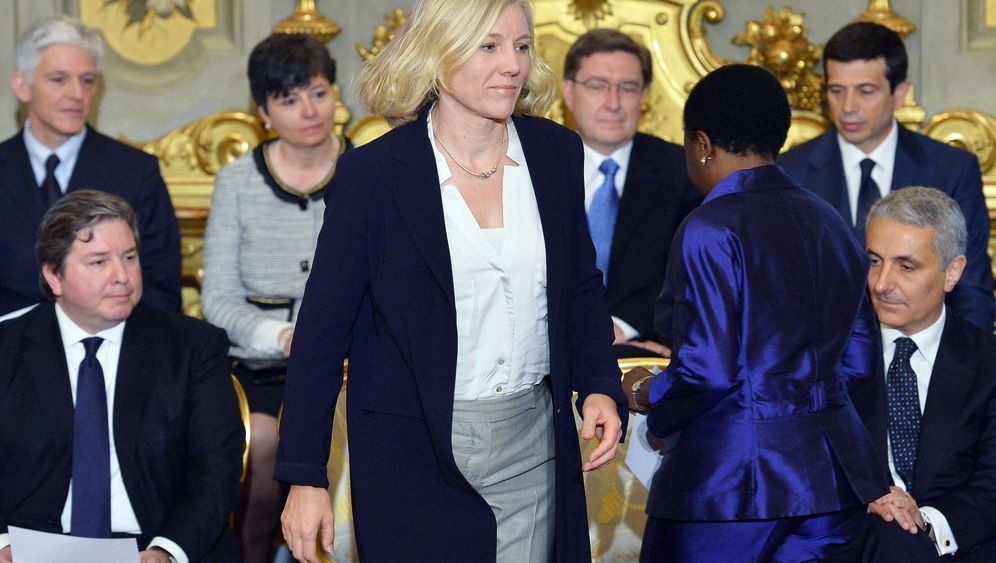 Sure, there is always Michael Schumacher, but besides the Formula One race car driver for Ferrari, Josefa Idem is probably Italy's favorite German from the sporting world. The country's papers often call the blonde sprint canoeist from the state of North Rhine-Westphalia a "legend." And now this legend from Germany is part of the new government in Rome.

Josefa Idem, born 48 years ago in the city of Goch, has been named the minister of equal opportunity, youth and sports. It's a new combination of issues and an interesting post because in Italy sports and politics are often bizarrely connected -- as former prime minister and football club president Silvio Berlusconi illustrates. Not to mention, in a country where the old boys' club reigns, there is still plenty of work to be done for gender equality.

Idem is one of seven women ministers who now comprise one-third of the cabinet in the new government. By Italian standards, it's a noteworthy male-to-female ratio. When it comes to sports, Idem is beyond dispute. But she is also now responsible for making sure that the younger generations of Italian women continue to advance, which could lead to conflict.

A resident of Italy since the 1980s, Idem married her Italian trainer in 1990 and moved to Ravenna on the Adriatic coast. Soon after, she acquired Italian citizenship, a privilege that required her to give up her German passport. She found this regrettable, she recently said in a radio interview, adding that German efficiency and the Italian imagination compliment one another.

Now the member of Italy's center-left Democratic Party (PD) will be governing with members of Berlusconi's team who badmouthed the German-born politician shamelessly during the campaign, though she has repeatedly emphasized that she harbors no resentment for this. Voters recognize such comments as campaign rhetoric, she has said.

Despite the attacks, Italians adore Idem, who has won just about every canoe event there is to win, earning some 30 medals in Olympic and world championship events in her athletic career. No other woman has taken part in as many Olympic events, competed eight times, first for Germany and later for Italy. At the 2000 Games in Sydney she won gold for Italy, and barely missed doing the same by four thousandths of a second in Beijing in 2008, where she took silver instead.

In addition to her sports career, the mother of two also got involved in local Ravenna politics as head of the sports department. She has also earned a number of awards for her work. "I am a mother who works," she has said in the past.

Idem held her post in Ravenna for seven years before making her debut on the national political stage. She became the Democratic Party's spokesperson for sports policy. Then, in February, the party base elected her as their top candidate for the Emilia-Romagna region and she was voted into parliament in the 2013 general election. "I don't know what politics are like at the national level," she recently admitted to the Italian daily La Repubblica.

Despite this admission, Idem has already begun sparring with some of Rome's most outspoken politicians. Beppe Grillo, leader of the opposition 5-Star Movement, has accused her of spouting "garbage." He had previously claimed that the Olympic Games were a triumph of nationalism. Speaking on the subject, Idem said in the summer of 2012 that, while Italy is a country that roots for and cheers on its athletes, "that doesn't mean we're going to war."

Although as Italy's former leader Berlusconi has repeatedly congratulated her for her successes in sports, Idem has had few complimentary words for him, saying curtly that his antics at international summits were unacceptable.

It's a huge contrast to the approach taken by another female athlete who has also now stepped into Italy's political arena. Fencer Valentina Vezzali, a parliamentarian with former Prime Minister Mario Monti's centrist coalition, has said on TV that she would gladly allow Berlusconi to touch her.

Still, Vezzali, whose party also supports the new government, has praised Idem. "Josefa understands self-sacrifice, and we athletes are in the habit of achieving concrete results," she said. Giovanni Malagò, the head of the country's National Olympic Committee, also called Idem the "right person in the right position."

Idem herself appears to have been surprised by her appointment by Enrico Letta. "My hands are shaking," she tweeted after she was named. "I feel the responsibility, but never fear. I'm rolling up my sleeves to begin work in service of the country."

In the process, the sports icon could encounter some resistance, though. Now she'll have to get down to policy making, and she hasn't yet revealed her plan. In the past, however, she told Vanity Fair that she supports gay marriage, which sparked heated debate during the campaign. Neither Berlusconi's nor Monti's allies are likely to support her on this issue.