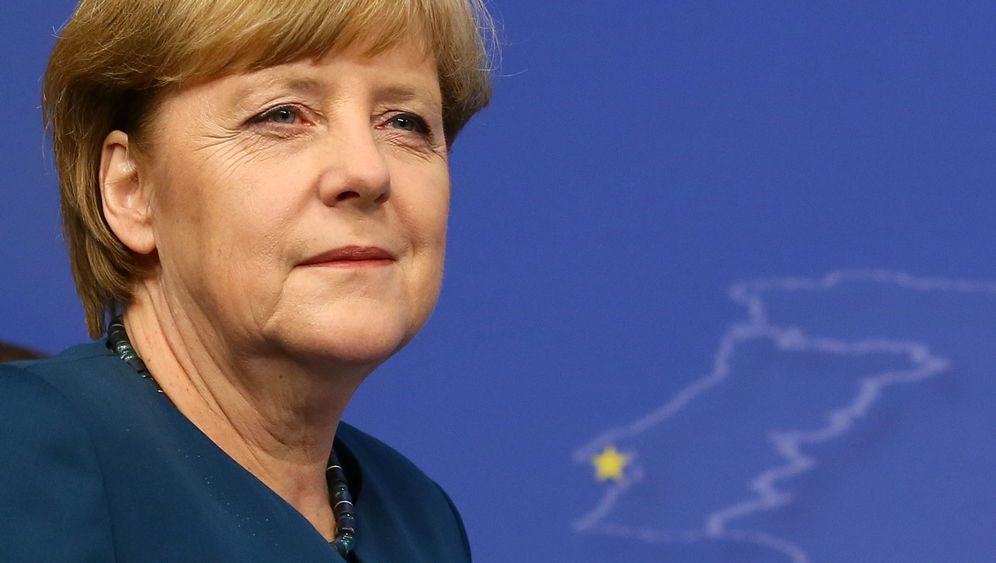 A party needs two things to win elections: a top candidate and a campaign platform. The European People's Party (EPP), a collection of conservatives and Christian Democrats in Europe, has neither at the moment. And that has a lot to do with CDU leader Angela Merkel.

Just one year ago, the German chancellor was calling for "more Europe, not less." But now she has completed a radical about-face. At the EPP summit in the Vienna Kursalon concert hall last Thursday, Merkel showed that she had transformed herself into an EU-skeptic. Her conservative colleagues were left with the impression that the German chancellor now believes that there is too much Europe.

Merkel spoke with notable frequency about the problems associated with choosing a candidate to represent the party on a European level. And in the end, the group made no progress on its platform or on the issue of a candidate.

What is wrong with the CDU leader? The meeting in Vienna coincides with the image of a chancellor who is deviating more and more openly from her party's traditional positions on European policy. She is increasingly distancing herself from the foreign policy tradition that the CDU, more than any other party, has maintained and upheld since the postwar period.

The contrast between Merkel and Finance Minister Wolfgang Schäuble, who embodies this tradition of Christian Democratic European policy, is also becoming more noticeable. Whether it is the pace of integration, the necessity for changes to European treaties or the direct election of the European Commission president, there are no major issues on which the chancellor and her finance minister are of the same mind.

Merkel, now in her 14th year as party leader, has learned that she must inject a little pathos into her voice when the discussion turns to Europe. She will no doubt do so when she delivers her statement to German parliament prior to the European Union summit this Thursday. And because she is aware of the mood in her party, she did not intervene when the CDU, at its party convention in Leipzig two years ago, approved a position paper that advocated providing Brussels with significantly more power.

But she was never a passionate supporter of such a path. More recently, she has been standing firm against expanding the power of Brussels institutions. And she has been particularly vehement when it comes to anything that might limit the powers held by national leaders such as herself.

Many of her fellow conservatives, of course -- particularly those who grew up in West Germany -- still believe that Germany must be merged as completely as possible into the European entity. They see it as a natural consequence of the wrongs Germany committed during the Nazi era. Finance Minister Schäuble enthusiastically invokes the "vision of a continent growing more and more strongly together." He believes that the crisis offers an opportunity to pursue this path more quickly.

Officially, at least, this is the position of the party as a whole. The CDU continues to celebrate itself as champions of European unification and their position papers read as if they had been written by former Chancellor Helmut Kohl, who became teary-eyed when he spoke of the "House of Europe." "The commitment to Europe is for us both a matter of reason and a matter of the heart," reads the CDU campaign platform, which was approved on Sunday.

Top party officials have been instrumental in keeping such passion alive. Deputy party leader Ursula von der Leyen, who is Germany's labor minister, dreams of the continent growing together into a "United States of Europe." Schäuble came up with the idea of a European finance minister, who would have the power to dictate to the individual countries how much debt they could take on. And if recent CDU resolutions are to be taken seriously, the European Commission president, who is currently appointed by European leaders, will soon be elected directly by the people.

For Merkel, however, reason trumps emotion, and her reason has led her for some time now to do everything she can to prevent further steps toward integration and prevent Brussels from gaining more power. She believes that it was precisely the unrealistic passion for a united Europe that led to the establishment of a common European currency which lacked a solid foundation. Vision? In an interview with SPIEGEL three weeks ago, Merkel warned against spending time "on theoretical discussions of how the European structures will look like in 10 or 15 years." She believes that it makes more sense to tackle the urgent problems of the euro crisis before engaging in complex debates over restructuring the bloc.

Furthermore, Merkel has no intention of taking her party's resolutions seriously. She wants the EU to work. But when there is trouble, she believes that the individual countries should take the reins, most notably Germany and France. This attitude leads Ruprecht Polenz, one of the CDU's most respected foreign policy experts, to conclude "that disillusionment is spreading within the party over the issue of Europe."

It has gotten to the point that Merkel feels strong enough to openly confront pro-European elements both in the German CDU and abroad. European Council President Herman Van Rompuy, for example, was supposed to prepare a strategy paper on the future of the EU and present it at the summit this Thursday. But Merkel made it clear to Van Rompuy in January that he could forget about his paper.

Indeed, she has made sure that there will be no groundbreaking resolutions at all when EU leaders meet this week. Van Rompuy's efforts have been replaced by a document Merkel wrote together with French President François Hollande. Instead of strengthening the existing institutions, Merkel and Hollande merely propose a full-time president for the Euro Group, the group of euro-zone finance ministers that oversee the common currency. Officials in Brussels are outraged. "You can't be constantly sending Mr. Van Rompuy on trips to address the issue of Europe's continued development and then suddenly introduce your own paper," says European Parliament President Martin Schulz, who will likely be the top candidate for the Social Democrats in next year's European elections.

Part of the Problem

Merkel's stalling tactics are reigniting the old basic conflict that has accompanied Europe since its founding. For those on the one side, Europe will only make progress if integration and the transfer of power continues to progress. This is the bicycle theory espoused by long-serving European Commission President Jacques Delors: Those who don't keep moving ultimately fall over. Within the German government, Schäuble is a supporter of this theory.

Merkel, though, believes that Brussels has become part of the problem rather than part of the solution, especially in the euro crisis. The chancellor would like to see European Commission President José Manuel Barroso, in particular, lean more strongly on heavily indebted Southern European countries to tackle domestic reform and get their budgets under control. Instead, he is now saying that the policy of austerity has reached its limits.

But Merkel's Europe-skepticism is also driven by self-interest. As a result of the crisis the German chancellor has seen her power increase considerably. When she travels to Brussels for meetings of European leaders, her voice tends to hold the most sway -- if only because Germany is the strongest economy in the euro zone. She sees little reason to share her power with, for example, Barroso, a man who she helped maneuver into his current position in 2004.

This also helps explain why she opposes the direct election of the Commission president -- a model supported by Finance Minister Schäuble. If European voters were to decide, heads of state and government would have less of a say, a scenario which Merkel would like to prevent. "I'm cautious in this regard," she said in the SPIEGEL interview. She argues that it is good for equilibrium among the institutions if European leaders are also involved in the decision.

While the chancellor is applying the brakes, Schäuble raves about a "historic moment of European unification." The direct election, he says, would be "a real breakthrough for a true European public."

And he's not the only one. Indeed, increasing numbers of German conservatives are vexed that Merkel no longer wants to discuss the long-term future of the European Union. "Europe will only emerge from the crisis if we know where we want to go," says Norbert Röttgen, a CDU member of German parliament and former environment minister. Europe, he adds, needs a new political architecture.

The 70-year-old Schäuble, for his part, is once again running for a seat in German parliament in part because he sees the euro crisis as an opportunity to fix the mistakes made during the creation of the common currency. Yet Schäuble is now forced to look on as Merkel puts off European reforms indefinitely. With the campaign starting, he cannot launch a direct attack. But he has stated his position clearly: "The Commission must have a real government," he said recently.

Of course, Schäuble also recognizes the challenges associated with making changes to European treaties. "A convention should only be called if there is a chance that it will produce results," he says. "But that doesn't change the fact that we will have to amend the treaties. The sooner, the better."

Most of all, there is growing disillusionment among German conservatives over the lack of ambition shown in their new campaign platform. "It isn't enough to say that Europe has to emerge strengthened from the crisis," says CDU foreign policy expert Polenz. The CDU, he argues, also has to explain how it intends to achieve this.

"We need an answer to the question of where we want to go with Europe," says European Energy Commissioner Günther Oettinger, who is a long-time CDU member. Oettinger isn't willing to simply go along with Merkel's about-face. "The direct election of the Commission president is the goal of the national CDU," he adds. Deputy CDU Chairman Armin Laschet agrees, saying: "The crisis has shown that we must strengthen European institutions."

The discontent could soon spread. A rare act of resistance was on display last Friday evening in Arnsberg, a small town near Dortmund. At a meeting of state, federal and European lawmakers from the state of North Rhine-Westphalia, Laschet, the head of the CDU in the state, made no secret of his dissatisfaction with the part of the campaign platform dealing with European policy.

Laschet wants his party to express more concrete prospects for Europe and said that the North Rhine-Westphalia state chapter of the CDU would adopt its own European policy guidelines before September general elections. Laschet seeks to strengthen Brussels on issues such as fighting international terrorism and organized crime, as well as energy policy. He also wants to see the Commission president be elected directly by European voters.

It is a demand that Merkel abandoned long ago. 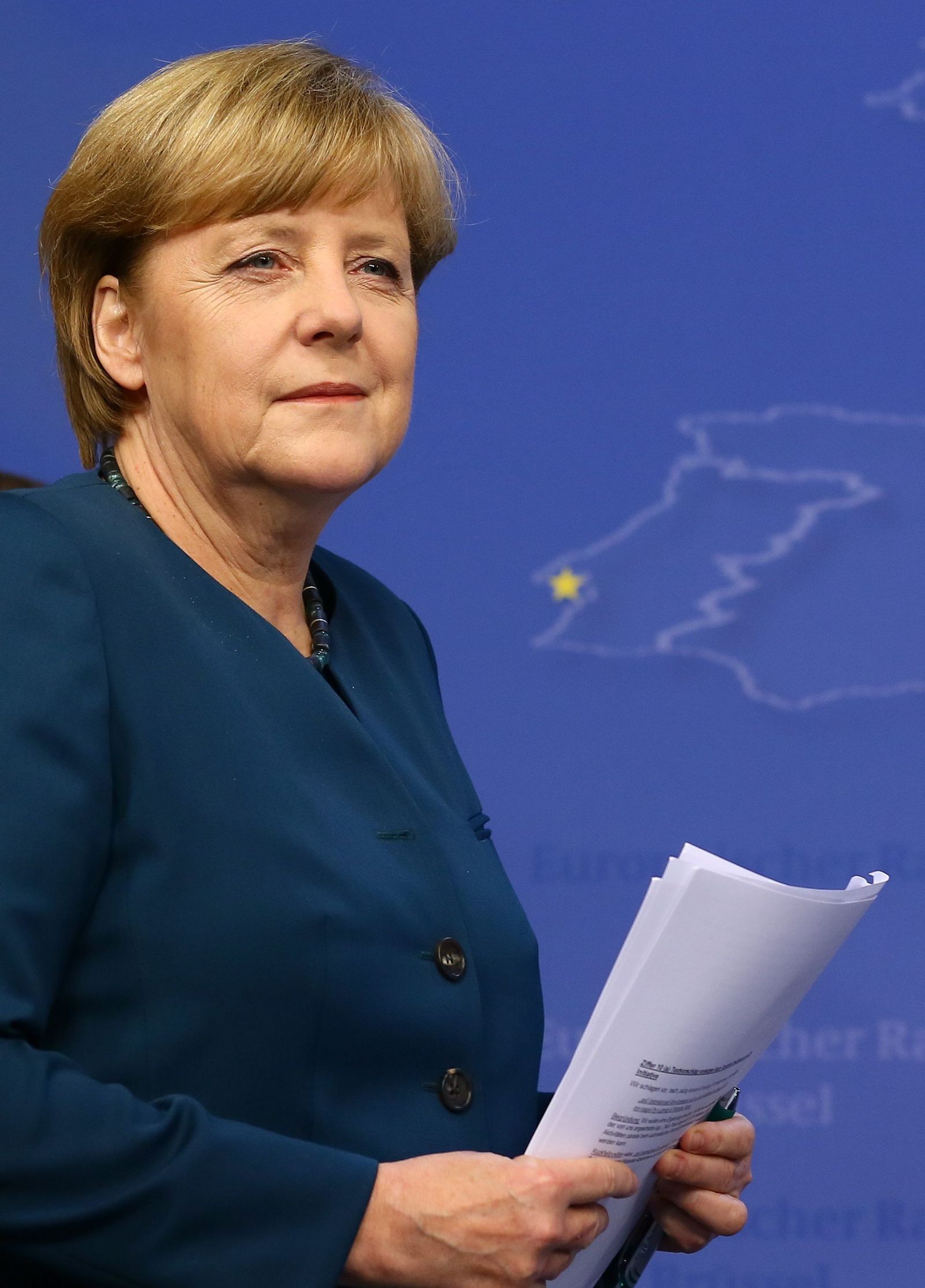 Not long ago, the message from Berlin was that more Europe and accelerated integration was needed to combat the euro crisis. But Chancellor Angela Merkel isn't so sure. Recently, she has hit the brakes. 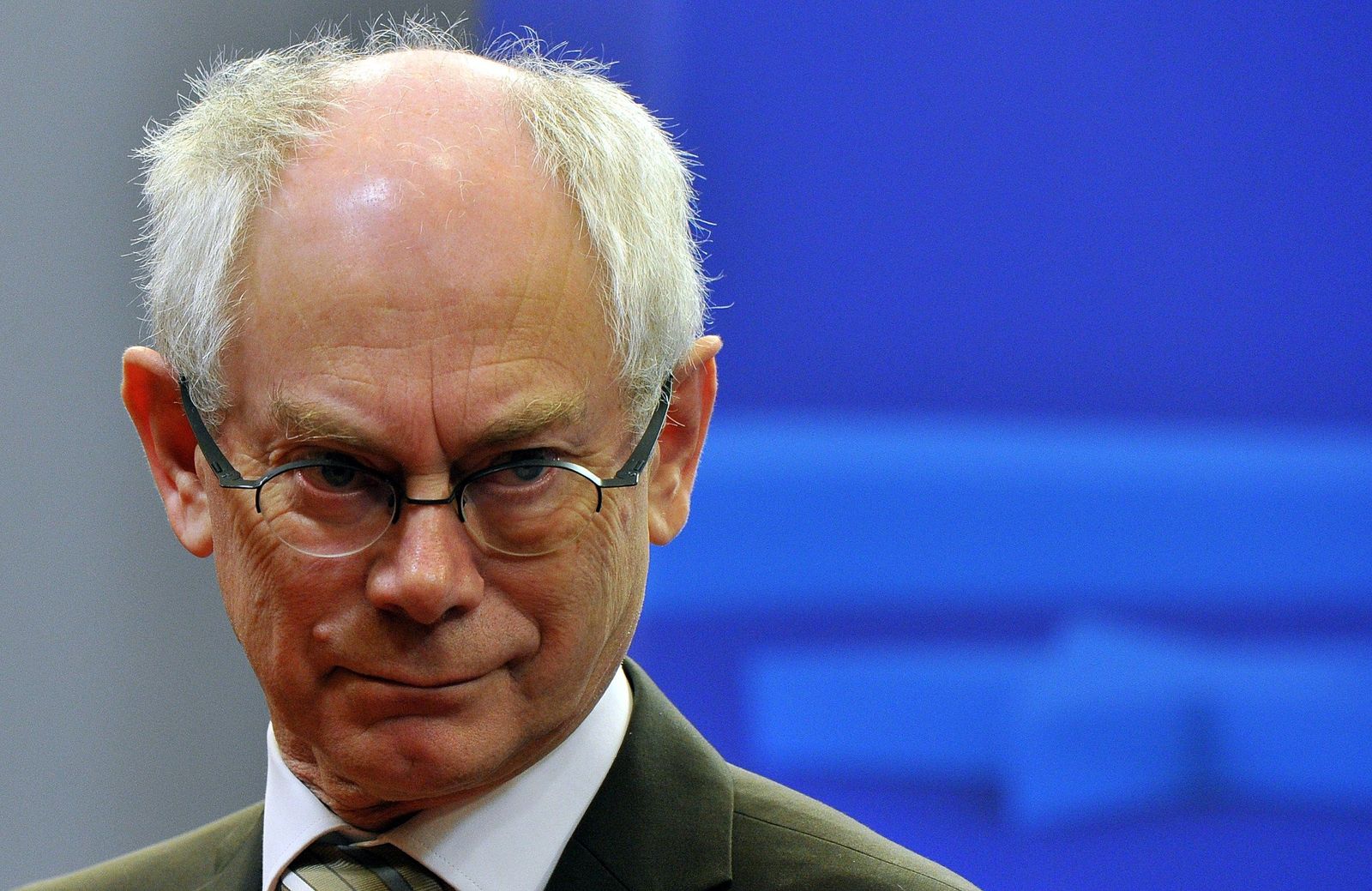 Initially, European Council President Herman Van Rompuy had been tasked with assembling a position paper on the future of the EU ahead of this week's European summit. But Merkel has ensured that it will be replaced by a joint Franco-German paper. 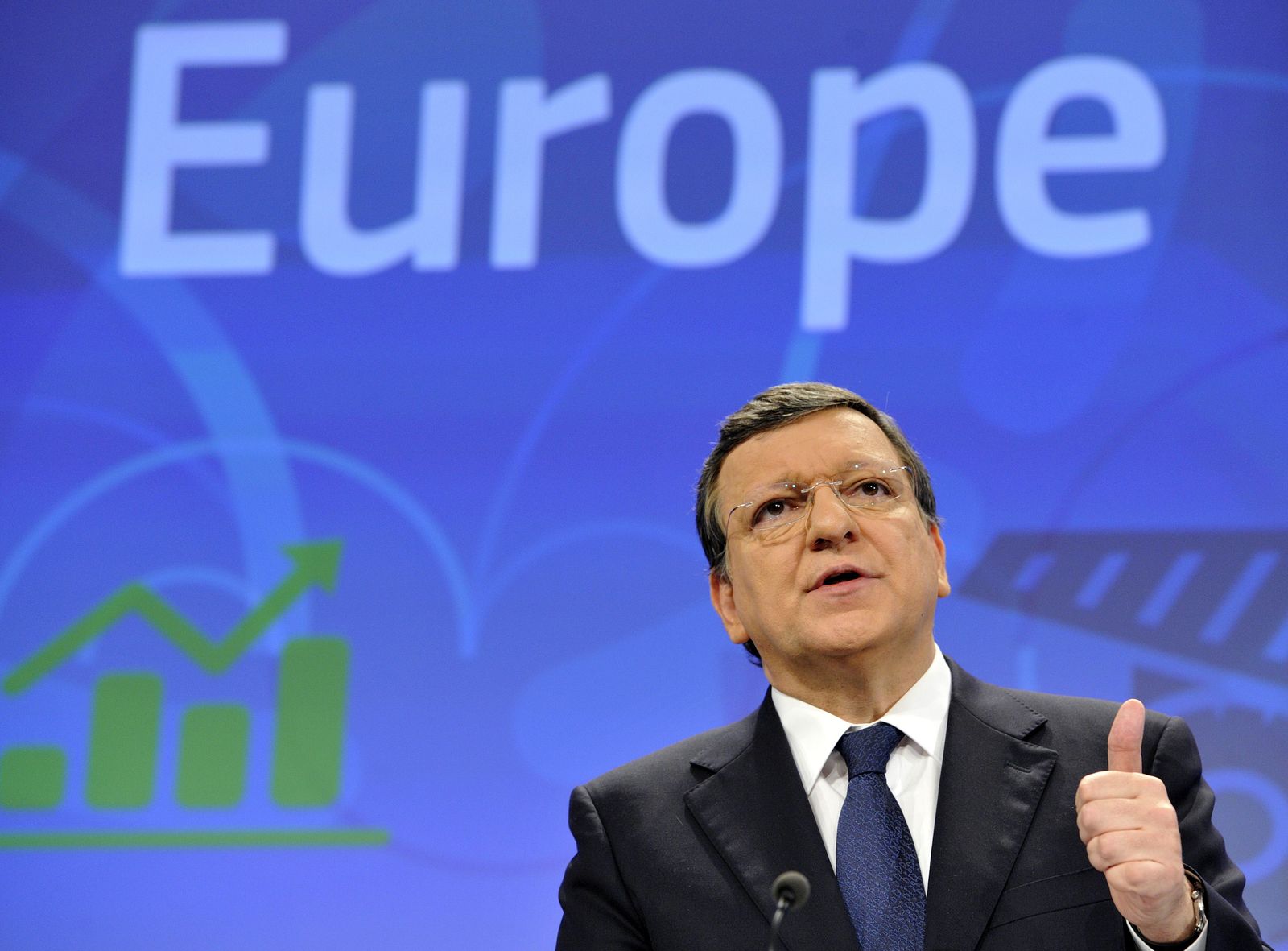 A significant issue on which Merkel differs from Finance Minister Schäuble and several other members of her party is that of whether the next European Commission President should be directly elected. Merkel believes that European leaders should appoint the successor to Jose Manuel Barroso, pictured here. 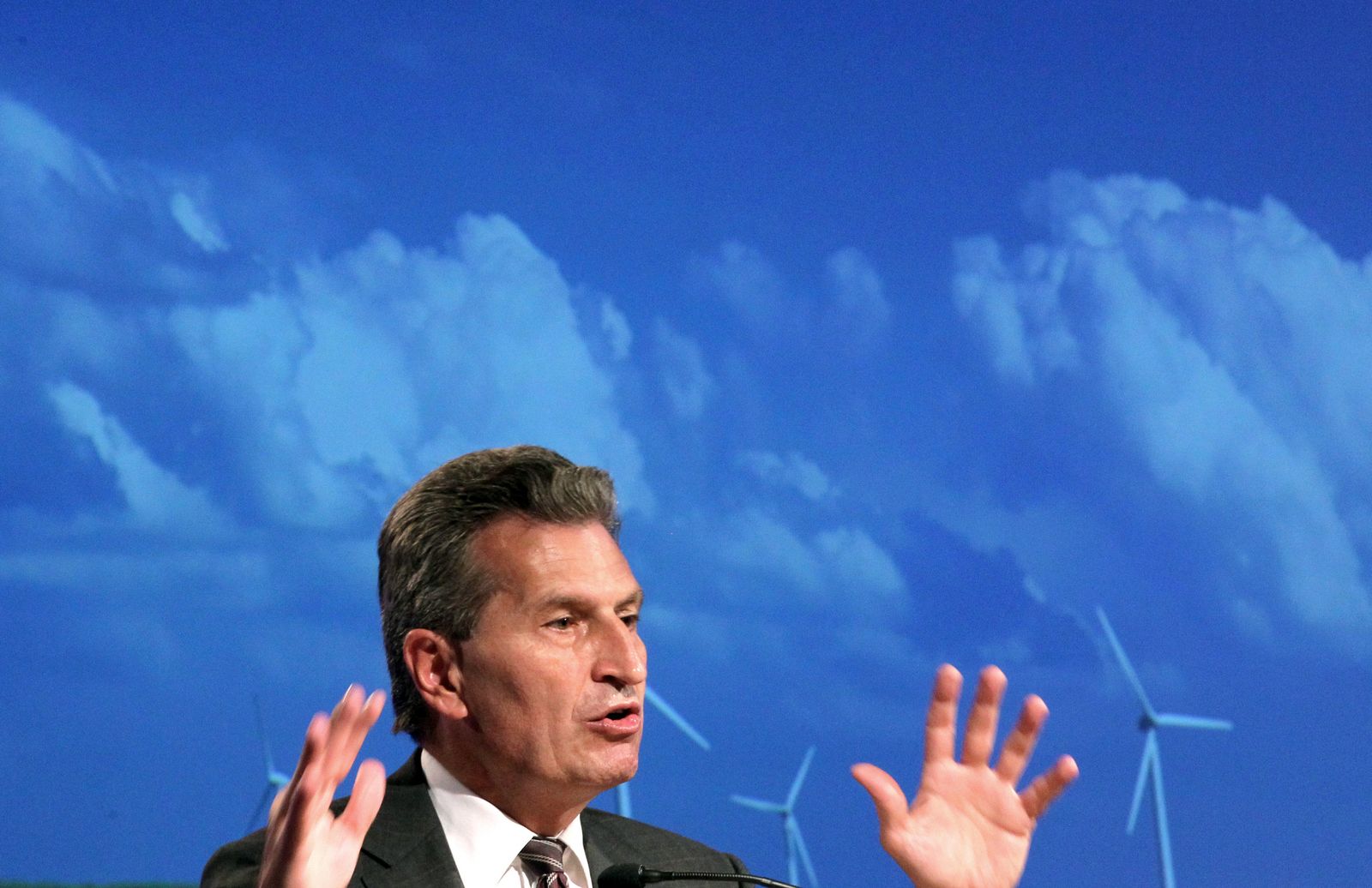 "We need an answer to the question of where we want to go with Europe," says European Energy Commissioner Günther Oettinger, who is a long-time CDU member. Oettinger isn't willing to simply go along with Merkel's about-face. "The direct election of the Commission president is the goal of the national CDU," he adds.