When Europe sends it envoys to Ukraine these days, they fly past the capital Kiev to Kharkiv, where temperatures are already summerlike. Residents of the city are still proud that it was the first capital of Ukraine, at least for one-and-a-half decades following the October Revolution.

The envoys drive to Balakirev Street in the northern part of the city, where, on the edge of a large forest, the Kharkiv Railway Hospital stands amid flowering linden trees and old oaks. Yulia Tymoshenko, currently Ukraine's most prominent prisoner, was transferred here from Women's Prison No. 54 to the hospital for the treatment of several painful herniated discs.

Lithuanian President Dalia Grybauskaite just visited the former prime minister, and so have members of the European Council and United States Ambassador John Tefft. They are all coming to protest the conditions of Tymoshenko's incarceration. Whether the upcoming European Football Championship will be a success or a political disaster for Ukraine has a lot to do with the patient on the ninth floor at this hospital. The pro-government newspapers disparagingly call her "Lady Y.," in an attempt to portray her as an eccentric woman who is holding the country hostage with her escapades.

The government has sealed off the clinic. "We are not a zoo," says a lieutenant colonel with the military, as he tries to shut the iron gate to a group of visitors. Twenty older women -- Tymoshenko's fan club -- are having a discussion in front of the main entrance. The women, who are there every day from 9 a.m. to 4 p.m., have placed their protest signs on a bench. The signs read: "Stop Torturing Tymoshenko," "Shame on Yanukovych" and "Yulia will Win."

Inside the hospital, the elevator only goes to the eighth floor. Prison personnel stand guard on the ninth floor.

'She Is Very Agitated'

But it doesn't take a trip in the elevator to discover what is going on here. Professor Lutz Harms, the doctor who is treating Tymoshenko, is standing outside under a lilac bush. A neurologist with Berlin's Charité Hospital, he is on the phone with his boss, getting his latest instructions. He has gone outside for privacy, which is a pointless exercise, given that Ukrainian agents can just as easily listen in on his mobile phone conversation outside the building too.

The 59-year-old doctor can hardly hide his frustration at having been "thrust into politics" in Kharkiv. He stabilized his patient after her hunger strike, and now he ought to begin her actual treatment. "But there are cameras everywhere up there, and no one knows who is sitting in front of the monitors," says Harms. "How am I supposed to establish trust with Mrs. Tymoshenko if I am never alone with her? She is very agitated, which gets in the way of the treatment being very beneficial."

He looks up at the five barred windows to Tymoshenko's 9th-floor hospital room, the room where she has her meals and a third room for meetings with her attorney. "I spend more time during the day dealing with administrative nonsense than with my patient," Harms says.

He has become a chess piece in the game the Ukrainian president is playing with his archenemy. Yesterday officials refused to allow Tymoshenko's attorney to enter the hospital, saying that Harms had requested this, because the attorney's presence would have disturbed his work. "That's not true," says Harms, returning to the 9th floor.

Hardly an hour passes when he is not standing outside the gate with an interpreter, angrily voicing his protests to the Ukrainian press. Mrs. Tymoshenko has just stopped treatment, he says, because the prison authority published her treatment plan. "This sort of thing would not be possible in other countries. This takes the cake," Harms says indignantly, even though the head of Charité has urged him to exercise restraint.

The square in front of Railway Hospital has become a stage for Ukraine's confusing domestic politics. The play is called "The State Versus Yulia Tymoshenko," a political farce played by amateur actors, but with no director.

The deputy Ukrainian health minister appears on the stage to say that what is happening upstairs in the hospital "is not being decided by us or by the hospital." Her words could be interpreted as a stab at the government.

Then the deputy head of the prison administration appears. The colonel admits that his agency did publish the treatment plan on the internet, but as a "precaution against provocations." There are only cameras in Tymoshenko's room, he says, "in keeping with Article 103 of the Prison Code," but nowhere else. "Nobody believes him," says a man from the Ukrainian press.

The publication of Tymoshenko's treatment plan is a serious breach of the rules. The prison administration did not consider that in doing so it was handing Tymoshenko a minor victory. The prisoner on the 9th floor is already a step ahead of the government when it comes to public relations. And now someone else has appeared to further her cause.

A woman with long blonde hair has just stepped out of a car in front of the hospital. She is wearing a beige bolero jacket, a matching skirt and pumps. On the dusty, dilapidated square, she looks like Angelina Jolie in Africa. She is Yevgenia Tymoshenko, the prisoner's 32-year-old daughter, who has been traveling around Europe for weeks as her mother's ambassador.

She plans to file a complaint about the despotic actions of the prison authorities in the European Court of Human Rights, says the young woman. "This hospital has been turned into a heavily guarded prison, and the government's objective in doing all of this is to further ridicule Yulia Tymoshenko. I am proud of my mother!"

She walks into the hospital and emerges a short time later. The deputy head of the prison administration later says that she didn't even try to go to the 9th floor, but instead left the hospital soon after entering, so that the press would believe that she had been denied access to her mother.

The game continues in this fashion all afternoon, until Harms finally dashes out of the building one last time, his mobile phone pressed to his ear, to tell the press two more things, his voice trembling with anger. He says that he was "absolutely not terrorized by the Tymoshenko people" so that he would discontinue the treatment, as someone had just said on the radio. "It was a complete lie," he adds, noting that his trip home on Ascension Day had already been scheduled earlier and is not a capitulation by any means, and that a colleague from Berlin will replace him next week.

Day after day, the Ukrainian government is producing half-truths and fabrications in the Tymoshenko case, evidence of its helplessness. While each side delivers its statements in front of the hospital in Kharkiv, Prime Minister Mykola Azarov announces that the treatment could take place abroad, after all. But then the health minister goes before the press and corrects her boss, saying that this is "absolutely unnecessary."

At the same time, the opposition is introducing legislation in parliament that is intended to allow Tymoshenko to travel to Germany for treatment. But the governing party rejects the bill. "If some country announces that it will treat all 300,000 inmates in our prisons, we will examine the bill," a representative of the president says with a sneer.

The weekend arrives and Harms returns to Berlin. On the same day, Professor Karl Max Einhäupl, the head of Charité Hospital, throws all caution to the wind. In his opinion as a doctor, he says, a situation must be created for Tymoshenko "that is presumably very difficult to establish in Ukraine." What he means is a situation that has never existed there before. 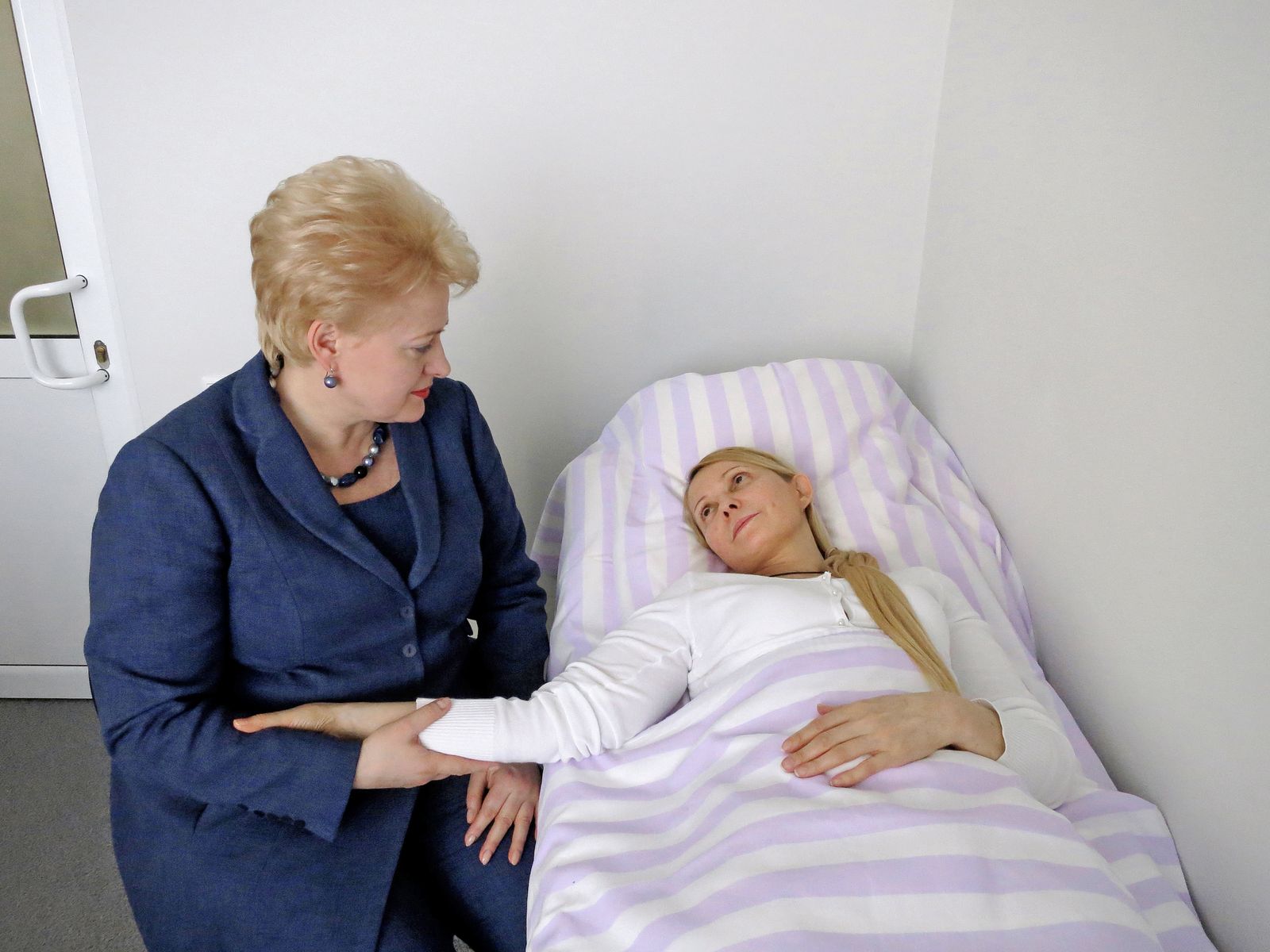