In a referendum on Sunday, nearly 68 percent of Swiss voters came out in favor of plans to give company shareholders a veto on compensation and ban big payouts for new and departing managers. The final results showed that all 26 Swiss cantons backed the proposals.

Named after its founder, Swiss businessman turned politician Thomas Minder, the Minder Initiative -- or "fat cat initiative," as it has also been dubbed -- will now be written into the Swiss constitution and applies to all Swiss companies listed on the stock exchange.

Just days after the European Union agreed on measures to cap bankers' bonuses, the Swiss referendum could serve as a signal to other European countries. In Germany, center-left Social Democratic Party deputy parliamentary floor leader Joachim Poss told the Neue Osnabrücker Zeitung that his party would be calling for a similar law on limiting executive salaries.

"The result should be seen as a spur to introducing a European guideline," he said. "People no longer accept this warped bonus system, not only in banks but also in the business sector."

Even Germany's pro-business Free Democratic Party, the junior party in Chancellor Angela Merkel's center-right coalition, welcomed the result. Rainer Brüderle, the FDP's deputy parliamentary floor leader and its top candidate in upcoming national elections, said that the vote had sparked a useful debate. "The issue will be addressed before the election," he said on Monday morning.

Support for the Minder Initiative has been fueled by a series of perceived financial disasters, with Swiss banking giant UBS resorting to state aid during the financial crisis after posting billions in losses.

Meanwhile, companies such as pharmaceutical giant Novartis have announced thousands of layoffs. But executive salaries and bonuses continue to soar in Switzerland, which has sparked a groundswell of public anger.

Thomas Minder launched his campaign in 2006 and told Swiss TV on Sunday that he "was glad the long battle is over."

According to the draft law, shareholders will be able to veto salaries, while sign-on bonuses and golden handshakes will be forbidden. Company managers who flout the rules could face prison.

German editorialists on Monday agree on the trailblazing significance of the Swiss referendum but express concern that implementing some of the world's toughest rules on executive pay into national law could prove to be tricky.

"The referendum against 'fat cats' would probably be as welcome anywhere as it was in Switzerland. It's a popular issue and one that capitalizes on feelings of envy. But there are some factors unique to Switzerland. Over the years, the economy has failed to tame the more rapacious of its mangers, while double-digit salary hikes are conspicuously hard to reconcile with the Swiss principle of moderation. The squabble over the 72 million Swiss francs (€59 million) paid to Daniel Vasella, former head of the pharmaceuticals giant Novartis, was the last straw …. But it will be some time before the results of the referendum are enshrined in a law, throwing the door wide open for lobbyists across the board. It should not be forgotten that shareholder meetings are determined by international financial investors, who are more relaxed about salary issues than many small shareholders. That could significantly reduce the harsh impact of Sunday's vote."

"Even the supposedly placid Swiss are capable of outbursts of anger…. Part of democracy is trusting in the voters. And now they have vented their rage at generously remunerated managers and board members…. Much to the astonishment of the rest of Europe, now looking enviously at this strange mountainous nation: Germany, France and Britain would also love to give a resounding thumbs down to fat cats in pinstripe suits."

"Anger over these big hitters must have been considerable for the Swiss to have taken Thomas Minder's cue …. The economy's self-regulatory forces failed when it came to manager salaries, and both their pay and their behavior came across to the Swiss as increasingly brazen. In other words, un-Swiss."

"Only the Social Democrats and the Green Party supported the initiative in parliament. Center-right parties might now give in to the temptation to blunt the edges of the draft law and dilute it when it comes to its implementation. But further referendums are scheduled later this year…. Were parliament to deny the people the fruits of their victory, they would take their revenge in the fall."

"Manager bonuses are obviously an easy target for populists. But the distaste felt by people across Europe for often absurd incentive payments awarded to investment bankers and company heads is not just a result of envy. It is the result of a remuneration system that has, for too long, neglected the aspect of making success sustainable. Improvements in recent years have not really helped."

"In contrast, the Swiss model that has now met with broad public support hits the spot -- it dispenses with legal caps and quotas but boosts the rights of the shareholders to have a key say in the salaries of their most important members of staff …. Boards will therefore have to openly justify their own earnings and their head honchos' salary models to the company owners. This should limit bonuses more effectively than guidelines drawn up in the boardroom, which rarely reflect complex realities. Shareholders represent the best yardstick for measuring fairness of pay, after all."

"Political establishments in other countries would do well to heed Switzerland's lesson. It is no coincidence that support for the Minder Initiative came at the same time as negotiations in Brussels for a cap on bonuses in the European financial sector."

"Politically, Minder won. But it remains to be seen whether executive salaries really will be curbed when shareholders are making the decisions. Given British and US experience with boosting shareholder democracy, there is reason for skepticism. But one crucial factor is that pressure on executives in listed companies will increase. Exorbitant salaries will need to be explained -- not just to shareholders but to the public. Because the people will no longer passively accept excessive salaries." 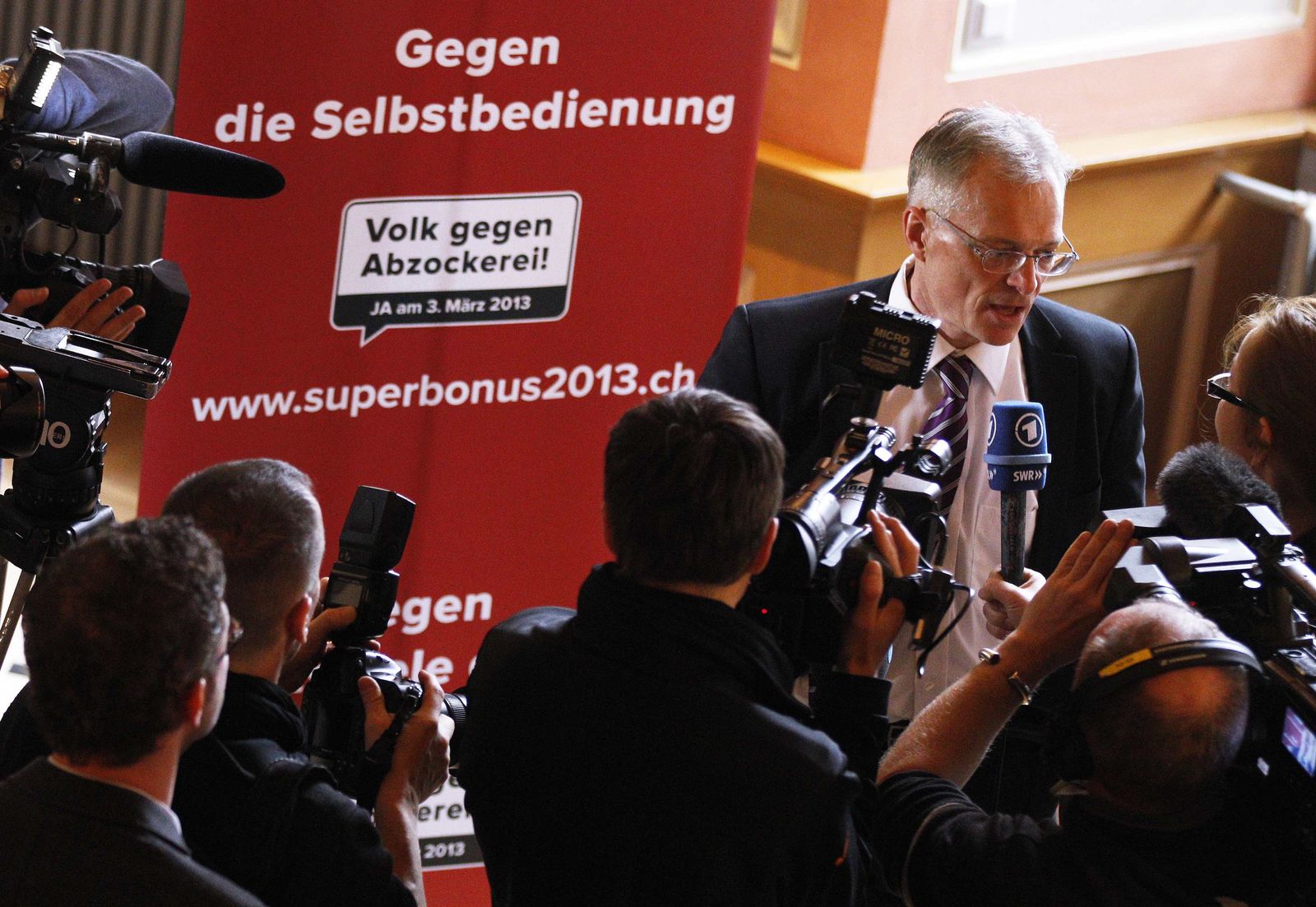 The Swiss voted in favor of Thomas Minden's plans to impose some of the world's strictest controls on executive pay.