When Anders Fogh Rasmussen drives to his office in the Schaerbeek neighborhood of Brussels in the morning, he gazes longingly at a large construction site across the street. The site, where construction cranes jut into the sky, will eventually be the home of the new, 250,000-square-meter (2.7-million-square-foot) NATO headquarters. Price tag: more than a billion euros.

The secretary general of the Western defense alliance would be in his new office by now, if it weren't for the significant delays in completing the massive glass-and-steel structure.

But the delays are among the least of the former Danish prime minister's current problems. Rasmussen has the thankless task of managing a much more difficult rebuilding project. More than two decades after the end of the Cold War, NATO still hasn't defined the role it wants to play in a changed world.

The goal of "keeping the Americans in, the Russians out and the Germans down," as Lord Ismay, the first NATO secretary general, put it, was obsolete by the fall of the Berlin Wall. But NATO members, especially the Europeans, are having a difficult time accepting the need to adapt their organization.

With unprecedented bluntness, a confidential analysis by the German Foreign Ministry reveals how few of the programs that were announced at the NATO summit in Chicago last year have been implemented. "It has not been possible to achieve any consensus in core areas," the document reads.

The report lists in detail the challenges the alliance must overcome, from poor cooperation to missile defense to the lack of funding for an effective security policy. The authors conclude that progress is moving at "a snail's pace."

The inertia at NATO is out of proportion with the speed at which the global balance of power is changing. The Americans, for example, are turning their attention to the emerging Asian economies, which are also becoming stronger militarily.

Washington, for its part, is increasingly unwilling to assume a growing share of the defense of Europe and its interests. "The burden sharing between the US and the Allies has become increasingly unbalanced," Rasmussen wrote two weeks ago in an internal letter to NATO ambassadors. "If this continues, it could weaken political support for the Alliance in the United States."

The Europeans, however, seem unable to assume a larger share of the burden from their big ally. Without American help, it would have been necessary to end the international mission in Libya two years ago after only a few days. Little has changed since then.

At last May's summit in Chicago, the NATO leaders announced major new goals. The communiqué stated that NATO would enhance its cooperation with the European Union. In the interest of reducing costs, the individual members promised to better coordinate their respective defense projects. The Europeans pledged to improve their military capabilities. According to the document, the alliance was embarking on nothing less than a "new age of cooperation."

But these were empty promises. When NATO defense ministers met in Brussels last Thursday to launch the key initiatives of the Chicago summit, they couldn't even agree on the basic working documents. The implementation report for the "Chicago Defense Packet" was put on ice. "This must be viewed as a significant setback for 'Chicago,'" said a German diplomat.

In Berlin, others are blamed for the development. Especially the "seemingly incompatible positions of a few nations" with the mainstream of NATO partners is obstructing progress in key areas, the Foreign Ministry analysis concludes. The nations in question are France and Turkey, and there is a lot more at stake than differences over individual issues. "In particular, there is still one unanswered question: 'Quo vadis, NATO?'"

The German analysis glosses over Berlin's role in this lack of progress. It merely mentions, in a roundabout way, that the Chicago resolutions are also complicated by the "issue of secured access to (yet to be created) multinational capabilities." The convoluted wording alludes to the partners' skepticism over whether the Germans can be relied upon in an emergency.

In essence, the European NATO members agree that because of the lack of funds, they must cooperate much more closely in various areas, including defense policy. Not every country has to have tanks, fighter jets or submarines. Instead, military capabilities should be pooled and shared. In an emergency, one partner would help other partners by providing them with the weapons they lacked.

But the concept presupposes that assistance is in fact provided in an emergency. This was called into question by Berlin's behavior during the NATO mission in Libya. The Germans withdrew their military personnel from the AWACS reconnaissance aircraft and ordered German warships to return home, so that they wouldn't be involved in implementation of the arms embargo. Foreign Minister Guido Westerwelle's constant insistence on a German "culture of military restraint" has only heightened the skepticism of partners like Great Britain and France.

It also bothers the governments in London and Paris that the German parliament, the Bundestag, has to approve each mission, which they believe makes Germany's actions unpredictable. Defense Minister Thomas de Maizière hasn't even found support within his own ranks for his proposal to change the approval rules.

It isn't just the Germans who are getting in the way of a joint arms and defense policy. The French, for example, have issues with NATO's planned missile defense system. According to the German Foreign Ministry analysis, the French government's "strong emphasis on national sovereignty" is an indication that Paris is uninterested in consensus. When push comes to shove, the nation state is more important to Paris than joint defense efforts.

The same applies to Turkey. According to the German report, a key problem is the Turks' refusal "to constructively support the concept of partnership." The negative assessment by the diplomats refers to the rigid stance taken by Ankara, which refuses to cooperate with NATO partner Israel and is also blocking cooperation with the European Union because of the Cyprus conflict.

It was because of this stance that the Turkish representative chose, at the last minute, not to approve key documents associated with the NATO projects last week. "The fundamental differences make it impossible to reach an agreement at this point in time," the Turkish NATO embassy in Brussels informed the allies.

Money is another bone of contention. Missions like Afghanistan have increased the demands on the alliance, but the economic crisis means that most governments are spending less on defense. According to an internal breakdown by Rasmussen, the American share of the NATO budget has increased from 63 to 72 percent in the last decade, a development the Americans have long deplored.

"Initial feedback shows that all nations face significant problems when it comes to assuming the planned burdens," reads the Foreign Ministry analysis. Officials in most European capitals hope that when push comes to shove, Washington will not abandon it allies.

Nevertheless, last week the Americans unofficially let their partners know that US President Barack Obama is not willing to put up with Europe's stance any longer. At Washington's insistence, a special NATO summit will be held in June. At that meeting, Obama wants German Chancellor Angela Merkel, French President François Hollande, British Prime Minister David Cameron and other European leaders to make a public commitment stating which of them will assume which additional costs.

Most Europeans, however, have no intention of budgeting more money for defense. Instead, they actually hope to save money as a result of the planned withdrawal from Afghanistan in 2014. In his recent letter to NATO ambassadors, Rasmussen urges that this "peace dividend" remain part of the defense budget. The "Allies should look to make the political commitment that defense budgets will increase once their economies pick up," he writes. But this is highly unlikely that will actually happen.

There is in fact hardly any important issue on which the partners aren't blocking each other. For instance, there has also been no progress on one of the alliance's showcase projects, the planned missile defense system. The dispute revolves around the question of how non-NATO countries are to be integrated into the project. The United States, Turkey and the Baltic countries are mainly interested in discussing operational issues. Other countries, most notably Germany, France and Italy, are calling for a political approach and want to involve Russia, which takes a critical view of the missile defense plans. "Progress in the area of missile defense, as one of the flagship issues in Chicago, has been disappointing," the German analysis states.

Criticism of the alliance's capabilities now extends into the German Bundestag, where lawmakers across party lines question whether NATO is prepared for future challenges. "Everyone is doing his own thing without taking the others into account," says Rainer Arnold, a defense expert with Germany's opposition center-left Social Democratic Party (SPD). His fellow lawmaker Omid Nouripour also sees little reason for optimism. "The Americans are pulling back from NATO," says the Green Party politician. "For them, the Pacific region is more relevant." The Europeans, he adds, are not filling the resulting power vacuum.

There is no indication that the allies will manage to agree on the necessary reforms in the foreseeable future. When Rasmussen leaves office in 2014, his record will seem meager, but he will be somewhat justified in assigning the blame to obstruction by member states.

The Danish politician shouldn't be too worried about a career setback. He already has his sights set on his next move. Rasmussen has noted with interest that the European liberals are considering declaring him as their top candidate for the 2014 European election. 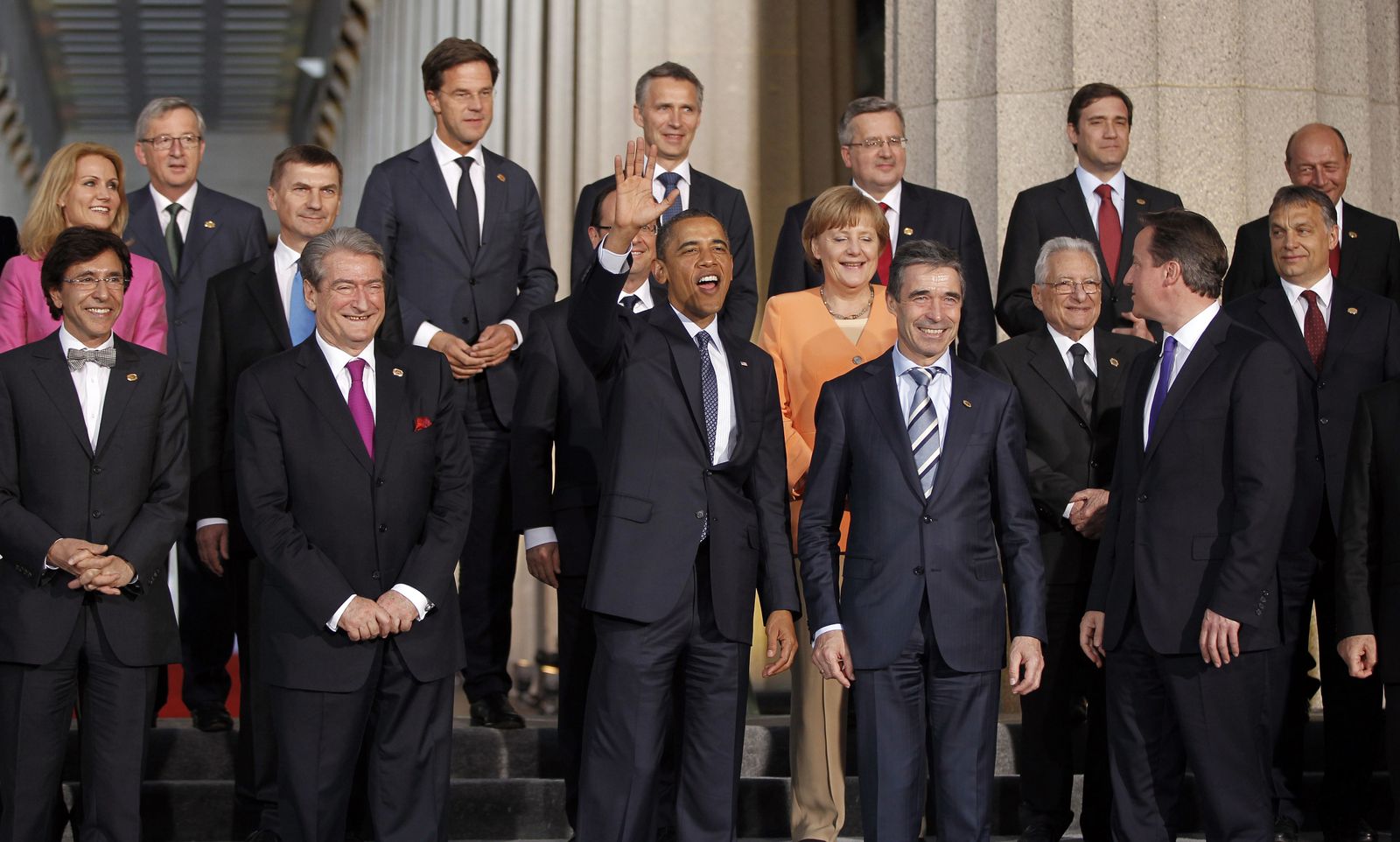 The Chicago NATO summit last May: despite grand reform pledges, not much has happened since then.