Philip Breedlove needs a pen. He is surrounded by journalists and is looking around desperately. Finally, his advisor hands him one and it disappears almost entirely between the American four-star general's broad fingers. Then he begins sketching out in quick strokes the outlines of Ukraine on the back side of a white menu -- almost certainly not for the first time. He then draws in eastern Ukraine that is under the control of pro-Russian separatists.

Breedlove is head of the United States European Command and NATO Supreme Allied Commander Europe. Last Monday in Berlin, he said what he would later explain in greater detail in an interview with the Frankfurter Allgemeine Zeitung newspaper -- namely that the forces supported by Russia want to create a more integrated and clearly defined area out of the small parts of the country already under their control. Currently missing from the equation is the Donetsk airport and land access to the Crimean Peninsula through the Ukrainian port city of Mariupol. Both are still in the hands of the Ukrainian government.

When asked what the European and NATO response will be, or even if one had yet been devised, the general said, just wait.

From Partner to Adversary

Almost exactly a year after the European Union's failed Eastern Partnership Summit in Vilnius, the situation on the ground in Europe has altered radically. Russia, a former partner, has now became an adversary. Borders have shifted. Soldiers have been given marching orders and innocent people have died. Much has happened in Europe that people thought would never happen again. Particularly not on a Continent that had seen so many millions of lives lost in the past century. Europe was supposed to have learned its lesson.

German Chancellor Angela Merkel now speaks openly about, "outdated thinking in terms of spheres of influence which tramples international law" and says it "must not be allowed to prevail." It's a thought she may have harbored many times, but when she said it in Sydney last week, it marked the first time she had uttered such sentiments to a global audience. It was a clear challenge and turning point after a year of diplomatic efforts that, while not useless, now appear to have been exhausted. From Russia's annexation of Crimea to the threat of secession in eastern Ukraine, there's little hope left that events can still be reversed. "Everyone seems to be at wits' end," say federal government sources in Berlin.

Europe has reached rock-bottom in the crisis with Russia -- and rock bottom is a dangerous place to be.

Within the European Union, the interests of the 28 member states are diverging in what are becoming increasingly clear ways. Taking a tough stance against Russia is generally less important to southern Europeans than it is to eastern Europeans. In the past, the German government had sought to serve as a bridge between the two camps. But in Berlin itself these days, significant differences in the assessment of the situation are starting to emerge within the coalition government pairing Merkel's conservative Christian Democrats and the center-left Social Democrats (SPD). It's one that pits Christian Democrat leaders like Merkel and Horst Seehofer, who heads the CDU's Bavarian sister party, the Christian Social Union (CSU), against Foreign Minister Frank-Walter Steinmeier of the SPD and Social Democratic Party boss Sigmar Gabriel, who is the economics minister.

"The greatest danger is that we allow division to be sown between us," the chancellor said last Monday in Sydney. And it's certainly true to say that this threat is greater at present than at any other time since the crisis began. Is that what the Russian president has been waiting for?

Last week, German Foreign Minister Steinmeier traveled to Moscow to visit with his Russian counterpart Sergey Lavrov. With Steinmeier standing at his side, the Russian foreign minister praised close relations between Germany and Russia. "It's good my dear Frank-Walter that, despite the numerous rumors of recent days, you hold on to our personal contact." Steinmeier reciprocated by not publically criticizing contentious issues like Russian weapons deliveries to Ukrainian separatists. Afterwards, Vladimir Putin received him, a rare honor. It was a prime example of just how the Russian strategy works.

The German foreign minister is professional enough not to be surprised by the Russian kindness. Even as the chancellor sharply attacked Putin during her appearance in Sydney, saying the West shouldn't be "too conflict averse," Steinmeier struck a far softer tone on the same day in Brussels. Without mentioning Merkel by name, Steinmeier urged for a bit more restraint in public statements, saying the West had to be careful to make sure "that in our use of language in public, we do not eliminate our chances of contributing to the easing of tensions and to the mitigation of conflict."

When he said that, the foreign minister knew that there was a chance he might get a meeting with Putin. As such, one could interpret his statements as an attempt to avoid jeopardizing his possible appointment with the Russian president at the Kremlin.

Still, the statements marked the first time any fissures had become visible in the joint position vis-a-vis Moscow held by Steinmeier and Chancellor Merkel. They are united in their assessment of Russia's actions, but their views differ on the best way to face the Russians in the coming weeks. That, though, has long since become the all-important question.

Merkel considers it to be crucial to make clear to Putin publicly how his conduct is viewed in the West and just what is at stake. She believes that the Russian president will only respond to clear statements -- if he bothers to respond at all.

Her approach is based on the concern that pro-Russian separatists may seek to divide eastern Ukraine for the long run and that the West will have to resign itself to that development. If that happens, then Russia will now have succeeded with its strategy for the third time since the end of the Soviet Union. Both Abkhazia and South Ossetia, breakaway republics that are part of Georgian territory, are under Russian control, as is the Transnistria region of Moldavia. The consequence being that neither country is able to join NATO because the military alliance stipulates that any member state must have previously resolved all border disputes with its neighbors prior to accession.

Steinmeier wants to avoid provoking the Russians. He fears that would force Moscow into an even more defensive posture and would further complicate cooperation with Russia in other areas like the nuclear negotiations with Iran. Just how deep these differences between the chancellor and foreign minister go may emerge at a meeting of senior leaders of the parties in Merkel's coalition government on Tuesday night.

"I want clarity from Sigmar Gabriel," says CSU boss Seehofer. "Does the SPD support the efforts of our chancellor or not?" He warns that the West needs to close ranks on the issue, the German government all the more so. He adds that, even within his own party, there is already too much friendly sentiment towards Russia that has to be kept in check. "They're asking, why are we permitting the SPD to have this Russia-friendly approach but not our own people in the CSU?" He also wants to call on Foreign Minister Steinmeier to not abandon the chancellor's hardline policy. "I know Mr. Steinmeier to be a level-headed diplomat, and we also need dialogue with Russia," Seehofer says. "But things will get highly dangerous if Mr. Steinmeier pursues his own diplomacy apart from the chancellor."

Last Wednesday, the chancellor discussed the issue with her foreign minister on the sidelines of a cabinet meeting. She convinced him to delay a meeting planned this week of the Petersburg Dialogue, a high-level meeting of representatives from Germany and Russia that serves as a prestigious forum between the two countries. Steinmeier went along with it, also agreeing to suspend the dialogue's traditional close working ties to the German-Russian Forum, which is led by Matthias Platzeck, a prominent Social Democrat. Platzeck, the former SPD national party leader, suggested in an interview last week that Russia's annexation of the Crimea Peninsula should be settled "retroactively according to international law," thus giving the move formal recognition. "The smarter ones" also have to give in now and then, Platzeck added. It's a statement that deeply irritated officials in Merkel's Chancellery. But it has been difficult for Steinmeier to distance himself from his friend.

Merkel, meanwhile, has taken sides with a group of critics of Moscow who want to extensively change the Petersburg Dialogue, which is intended to promote cooperation between civil society. The group includes Andreas Schockenhoff, the deputy head of the parliamentary group of Merkel's conservatives, Marieluise Beck, a member of parliament with the Green Party, and representatives of several non-governmental organizations. In a white paper, the group has called for a stronger role for foundations and other societal groups in the Petersburger Dialogue. They're also calling for a new chairperson.

The man currently heading the dialogue's German steering committee is Lothar de Maizière, the last prime minister of East Germany. Officials inside the Chancellery consider him to be too uncritical when it comes to Russia. Platzeck, who had hopes of becoming his successor, dashed them with his recent comments. "Anyone who wants to legalize the violation of international law and military aggression lacks critical distance to the Russian partners," says Shockenhoff.

Officials are also worried in other European Union capitals about the differences between the Chancellery and the Foreign Ministry. It is clear to everyone, the ambassador of one major EU partner says, "that only Berlin can negotiate on equal footing with the Russians." Meanwhile, officials in the Baltic states and Poland worry that Steinmeier could abandon Berlin's clear position on the Ukraine issue.

Comments made at a meeting of EU foreign ministers last Monday helped to fuel those worries. Federica Mogherini, the EU's high representative for foreign affairs and security policy, proposed adding additional Russian citizen's to the EU's red sanctions list. But Steinmeier surprised the other ministers by pushing for a formulation that only addressed the separatists in eastern Ukraine. Participants said he argued that "new channels" to Moscow had opened up at the G-20 summit in Brisbane, Australia, and they shouldn't be slammed shut again.

It wasn't just the Lithuanian foreign minister rubbing his eyes and strongly disagreeing. The foreign ministers from Poland and Estonia opposed the effort to protect the Russians as well. They said they had an entirely different perception of the talks in Brisbane and instead viewed them as a further hardening of attitudes. Critics of Moscow who took part in the talks argued that Russia hadn't undertaken any positive steps that would have justified the EU gesture.

That Frank-Walter Steinmeier prevailed in the end did little to assuage their concerns. 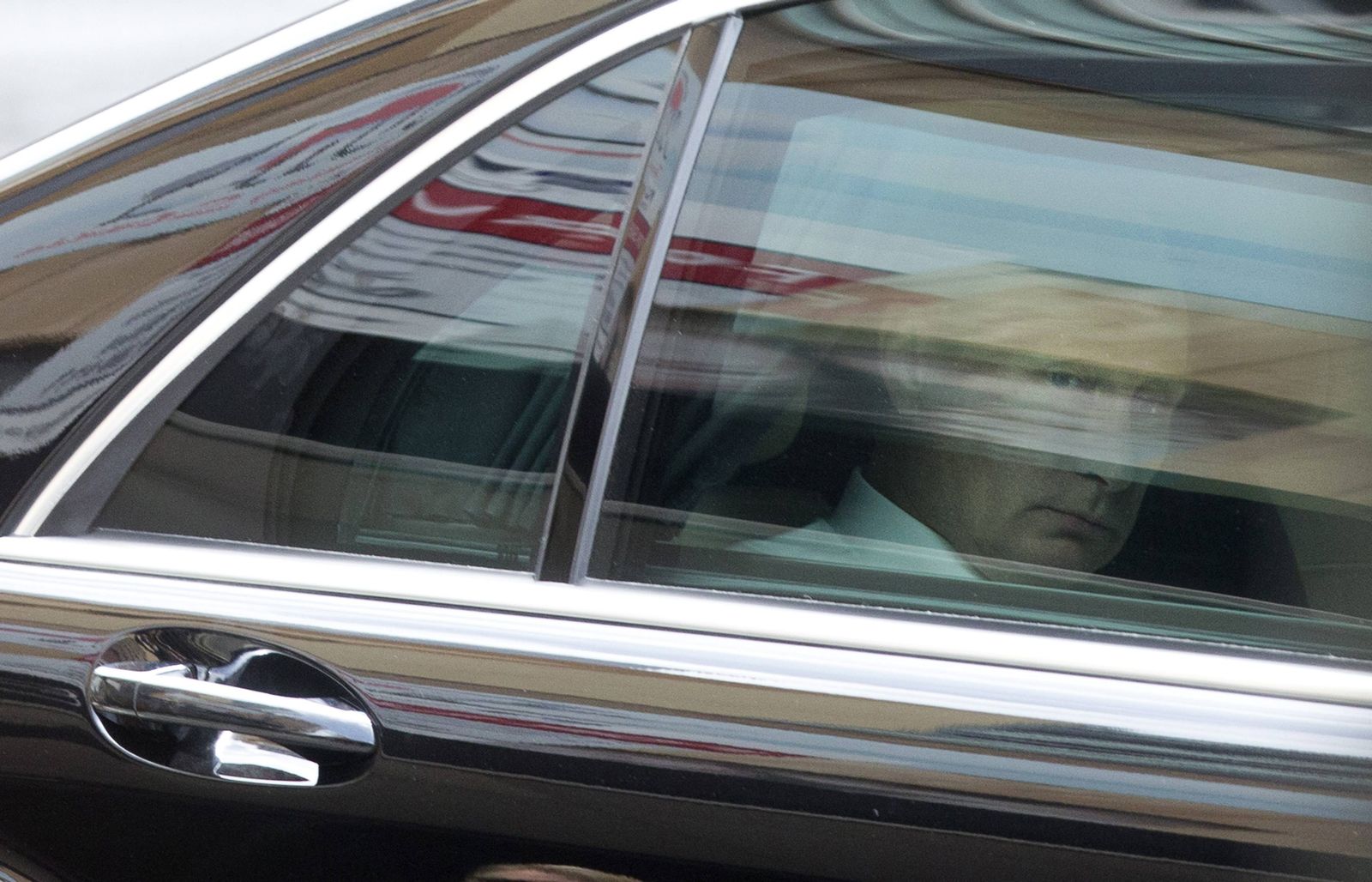 Russian President Vladimir Putin as he departs from G-20 summit in Brisbane, Australia on Nov. 16