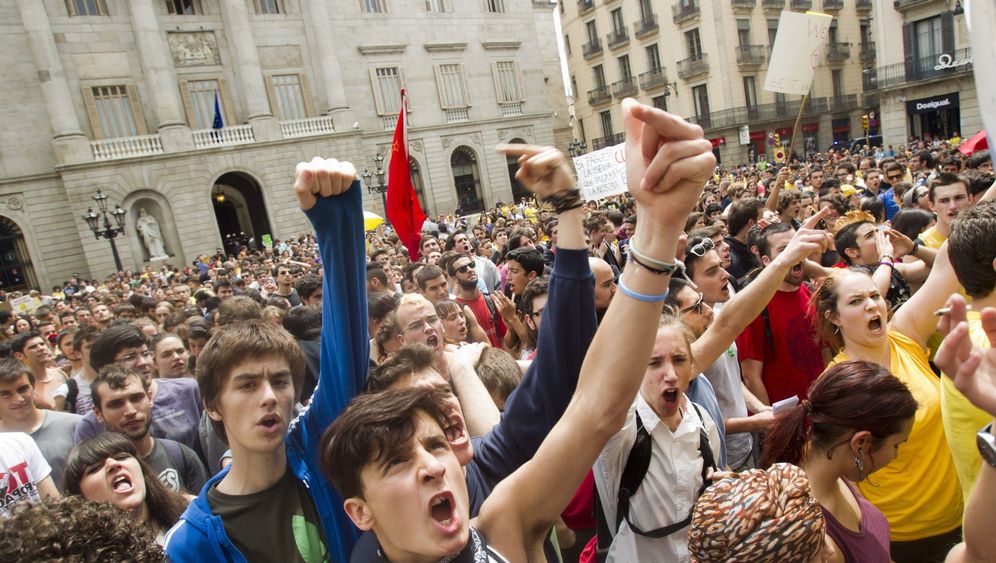 Photo Gallery: Loosening Up on Belt-Tightening

Wolfgang Schäuble sounded almost like a new convert extolling the wonders of heaven as he raved about his latest conclusions on the subject of saving the euro. "We need more investment, and we need more programs," the German finance minister announced after a meeting with Vitor Gaspar, his Portuguese counterpart.

The role he was slipping into last Wednesday was new for Schäuble. The man who had persistently maintained his image as an austerity commissioner is suddenly a champion of growth. If Germany couldn't manage to trigger an economic recovery, "our success story would not be complete," he said. And as if to convince even the die-hard skeptics, he added: "The German government is always prepared to help."

After three years of crisis policy, it was an impression shared by very few people in countries like Portugal, Spain and Greece. They are more likely to associate Schäuble and his boss, Chancellor Angela Merkel, with austerity mandates ushering in hardship, deprivation and unemployment.

But a new way of thinking has recently taken hold in the German capital. In light of record new unemployment figures among young people, even the intransigent Germans now realize that action is needed. "If we don't act now, we risk losing an entire generation in Southern Europe," say people close to Schäuble.

Berlin is making an about-face, even though it aims to stick to its current austerity policy. The German government has stressed budget consolidation and structural reform since 2010, when Greece was on the verge of bankruptcy. Berlin has been arguing that this is the only way to instill confidence among investors in the battered debt-ridden countries and help their ailing economies recover.

But now, several rounds of cuts later, the politicians who had set out to save the euro must now look on as the economies of ailing Southern European countries are once again slumping while unemployment is on the rise.

To come to grips with the problem, Merkel and Schäuble are willing to abandon ironclad tenets of their current bailout philosophy. In the future, they intend to provide direct assistance to select crisis-ridden countries instead of waiting for other countries to join in or for the European Commission to take the lead. To do so, they are even willing to send more money from Germany to the troubled regions and incorporate new guarantees into the federal budget. "We want to show that we're not just the world's best savers," says a Schäuble confidant.

Worries about Image and Elections

The government's change of heart isn't just a sign of selflessness and compassion. More than ever, the chancellor and the finance minister are worried that Berlin's tightfisted, heartless, austerity-obsessed image could solidify throughout Europe and do irreparable political damage. An exporting nation that sells two-thirds of its exports to other European countries cannot be unconcerned about its image abroad, they reason, especially when its government fears that constant criticism from the center-left Social Democratic Party (SPD) and the Green Party, claiming that it is acting as the gravedigger of the euro and dividing the EU, could hurt it in the upcoming election campaign.

Merkel and Schäuble hope that their initiative could help Merkel's coalition government of their center-right Christian Democratic Union (CDU), its Bavarian sister party, the Christian Social Union (CSU), and the business-friendly Free Democratic Party close its open flank. This time, instead of just acting in concert, cabinet ministers with the three coalition partners are actively cooperating.

Last Tuesday, Schäuble sent a letter to Economics Minister Philipp Rösler in which he proposed that the coalition partners act together. "I believe that we should also offer bilateral German aid," he wrote, noting that he hoped that this approach would result in "significant faster-acting support with visible and psychologically effective results within a foreseeable time period."

Schäuble needs Rösler's cooperation because the finance and economics ministries are jointly responsible for the government-owned KfW development bank. The Frankfurt-based institution is to play a key role in the German growth concept that experts from both ministries have started drafting for Spain. Spanish companies suffer from the fact that the country's banks are currently lending at only relatively high interest rates. But since it is owned by the German government, the KfW can borrow money at rates almost as low as the government itself. Under the Berlin plan, the KfW would pass on part of this benefit to the ailing Spanish economy.

Sharing the Benefits of Low Interest

This is how the plan is supposed to work: First, the KfW would issue a so-called global loan to its Spanish sister bank, the ICO. These funds would then enable the Spanish development bank to offer lower-interest loans to domestic companies. As a result, Spanish companies would be able to benefit from low interest rates available in Germany.

Under the plans, Germany could also invest in a €1.2 billion ($1.6 billion) venture capital fund that could be used to support new business activities. Madrid hopes that the program will generate a total of €3.2 billion in new investment.

The agreements with Spain are intended to serve as a blueprint for similar aid to Portugal and possibly even Greece. How high the payments to these countries will be has yet to be determined. "It will be nothing to sneeze at," say Finance Ministry officials. The German government envisions spending a total in the single-digit billions on the program. Schäuble plans to fill in the budget committee in the German parliament, the Bundestag, next week.

In his letter to Rösler, Schäuble also suggests that Berlin should advocate an easing of the guidelines for aid to crisis-ridden countries. He notes that Germany already acquired valuable experience in this regard during the difficult post-reunification period when it was developing the areas that once belonged to communist East Germany. "I think the situation in some EU member states is certainly comparable to Germany's situation at the time," Schäuble writes, and he urges Rösler to promote the plan at the EU Competitiveness Council meeting on Wednesday.

If Rösler is successful, some €800 million in funding could be released that was already made available for aid to Portugal but is still being blocked owing to competition-related concerns.

The fact that the finance minister and the chancellor are suddenly willing to do things that have been off-limits until now also has something to do with an internal Chancellery dossier from mid-May. The government headquarters had asked the ministries to take stock of the EU growth pact that was approved in June 2012 to support the austerity programs. The results were, in fact, supposed to demonstrate how well the German bailout strategy was working. But the officials' conclusions shocked even calculated optimists. In their report, they painstakingly documented that debt-ridden countries, especially those that have not taken advantage of EU bailout programs, have hardly made any progress in terms of needed reforms.

Since they had no other successes to report in their study, the authors listed items like the expansion of store hours in Italy. They also wrote, on a positive note, that France has begun preparations to open up competition within its railroad network beginning in 2019. And Spain was given credit for relaxing its residency regulations for investors.

The report's assessment of reforms in countries such as Greece and Portugal was more positive. But, as the authors soberly noted, it will take time for significant changes to take hold within the real economy. In light of the disastrous economic situation in many countries, the authors added an urgent warning: "For this reason, an additional challenge, in terms of the success of the pact, is to make a visible contribution to overcoming pressing short-term problems." In other words, they argued, the effects of the growth pact must be "felt within the population as quickly as possible."

Schäuble's new program is meant to achieve this. Similarities with the Marshall Plan -- that is, the billions the United States spent to help a devastated Europe get back on its feet after World War II -- are certainly not unintended. But, given its size, the current German plan could be characterized as something akin to a mini-Marshall Plan.

Still, it is hardly to be expected that the new programs will achieve similar results. At the moment, it is purely a German effort, and plans to get other countries on board are still little more than wishful thinking. Countries such as the Netherlands, previously considered to number among possible donor nations, have since been sucked into the crisis themselves.

In addition, Germany will elect a new parliament in less than four months, after elections in September. With her administration facing pressure from the anti-euro party Alternative for Germany, and despite her offers to help Southern European countries, Merkel doesn't want to be accused of throwing even more good German money after bad. To avoid this, the goal in Berlin is to achieve the greatest possible results while spending as little as possible.

All it takes is a look at previous European initiatives to conclude that this feat cannot be accomplished. The Eurocrats are exceedingly proud of the fact that an additional €6 billion has been set aside for the coming budget period, between 2014 and 2020, to fight youth unemployment. But owing to the complicated structure of the funding, the money will only be disbursed slowly. According to internal European Commission estimates, only about €3.5 billion of the total will actually be spent by 2020.

It also remains completely unclear what the effect of the greatly hyped €10 billion capital increase at the European Investment Bank (EIB) will be. The EIB intends to issue about €60 billion in new loans by the end of 2015 and hopes to thereby stimulate a total of €180 billon in investments.

But the economic stimulus program threatens to fall flat. So far, the EIB has shown little inclination to distribute the billions exclusively where they are more urgently needed: in Southern Europe. And, as EIB President Werner Hoyer has implied at every opportunity, the bank is determined to keep its top rating so that it can continue to finance itself at low rates.

Ironically, the Finance Ministry in Berlin backs Hoyer's stance. An internal Finance Ministry memo reads: "To preserve the portfolio quality and the AAA rating, the federal government is in favor of having the EIB continue to promote projects in AAA countries while implementing the anti-crisis program."

Likewise, even if there are well-meaning decisions and sufficient funds for programs, implementation remains a problem. Government administrations in Southern Europe are still too slow, the EU bureaucracy in Brussels is still slowing things down, and governments are still dragging their feet on promised reforms.

Instead, these governments are pressuring Brussels and the Germans, as the negotiators from Berlin for the European Council meeting in June are currently experiencing. While the federal government continues to insist that the crisis-ridden countries clean up their economies and government finances in the long term, the countries themselves want short-term relief. More than anything, what they mean by this is: a lot of money for new economic stimulus programs. 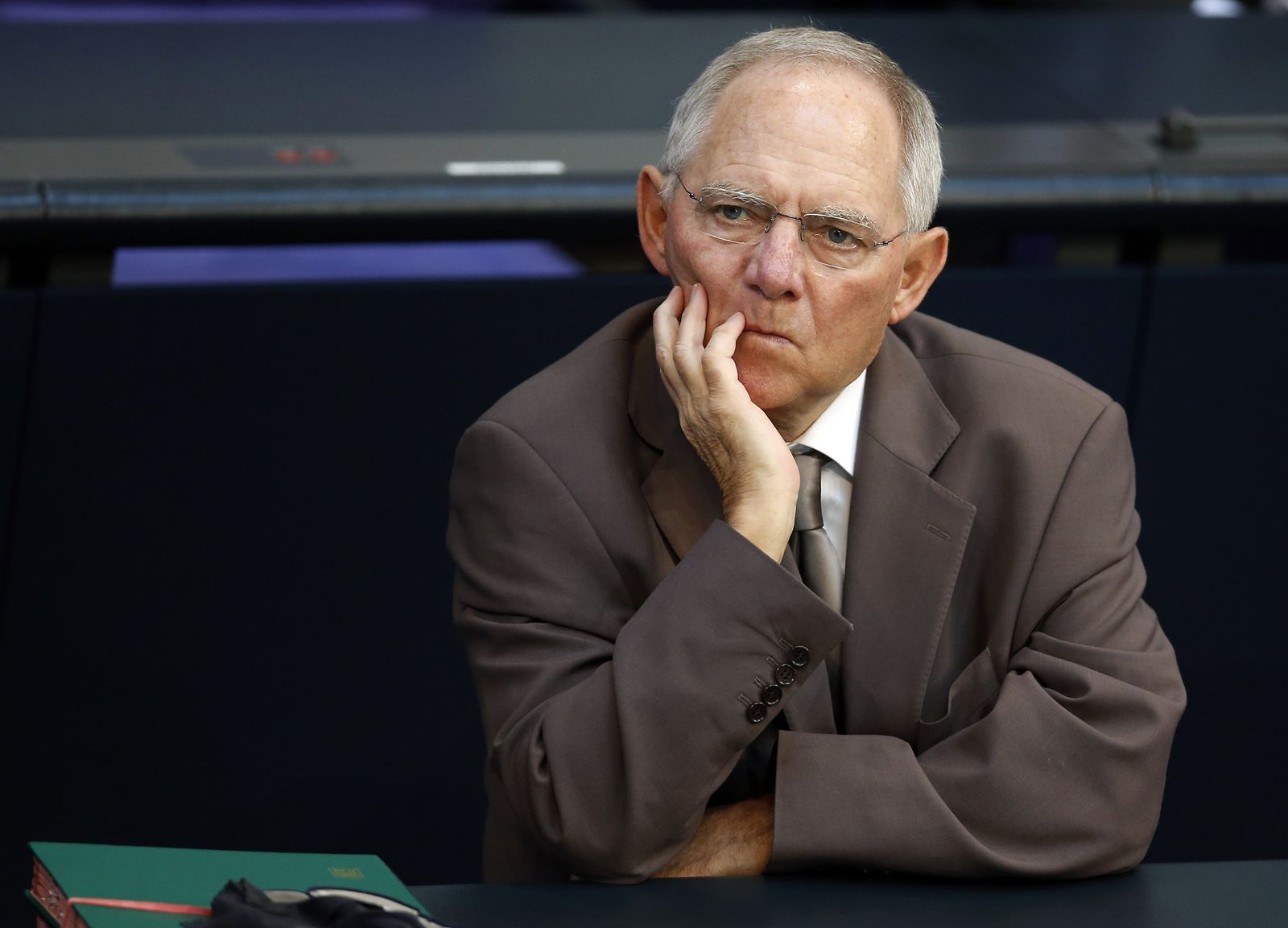 To do so, German government leaders are even willing to send more money from Germany to the troubled regions and incorporate new guarantees into the federal budget. "We want to show that we're not just the world's best savers," a confidante of German Finance Minister Wolfgang Schäuble told SPIEGEL.