Last Friday, the sun was shining in this paradise for Russians. The sky was a deep blue and the palms along the beach promenade swayed in a light breeze as the the temperature climbed to 29 degrees Celsius (84 degrees Fahrenheit) before noon. No doubt Limassol offered a welcome relief from the cold and wet autumn weather of Moscow. Russians appreciate this spot on the southern coast of Cyprus.

The boutiques sell sable coats even in summer, the restaurants serve salted herring and vodka, apartments near the pier cost upwards of €300,000 ($383,000) and there's no shortage of luxurious villas priced at millions of euros.

The city park has a bust of Russian poet Alexander Pushkin, there's a Russian radio station, Russian newspapers, a Russian Orthodox church, private schools offering Russian diplomas and signposts in Cyrillic writing. The mayor of Limassol himself speaks fluent Russian and studied in Moscow during the Soviet era.

There's one drawback, however: all the yachts, however luxurious they may be, are moored in the rather dreary old port. But relief is in sight. The new Limassol Marina will be finished soon, and if you you put your name down soon for one of the 650 available berths, you can get a special rate: €150,000 per year, depending on the size of your boat.

There's something else that is probably a greater cause for concern for the Russians of Limassol, though. They are at risk of losing their paradise because Cyprus is virtually bankrupt. The island's economy has been dragged down by the recession ravaging Greece, with which it has close business ties. In addition, Cypriot banks bought billions of euros in Greek government bonds that are practically worthless now. The banks have already had to write off large portions of their investments, and are in trouble as a result.

This prompted the government of President Dimitris Christofias to make a pre-emptive application for EU aid in the summer. Russia had already provided a loan of €2.5 billion. That money has been used up and Russian President Vladimir Putin is reluctant to provide a further €5 billion.

Now the euro countries, and especially Germany, will have to step in with a €10 billion aid injection to prop up the island's banks. That will confront German Chancellor Angela Merkel, Finance Minister Wolfgang Schäuble and their European colleagues with a major dilemma because a secret report written by the German foreign intelligence service, the Bundesnachrichtendienst (BND), outlines who would be the main beneficiaries of the billions of euros of European taxpayers' money: Russian oligarchs, businessmen and mafiosi who have invested their illegal money in Cyprus.

The Russians don't just love Cyprus for its great climate. The shell companies here are conveniently anonymous, the banks discreet and the taxes are low. Dirty money bestowed a lasting boom on Cyprus and the inhabitants of "Limmasolgrad" are still doing well.

The European aid will help the country stabilize its controversial core industry and keep it going for the next few years. In Brussels and in the EU capitals, the Cypriot financial sector doesn't enjoy an especially good reputation. Cyprus and its banks are widely seen as a tax haven and a money-laundering base.

But refusing aid is not an option. Angela Merkel has become a firm believer in the domino theory, which in this case would take on the following shape: allowing Cyprus to fall would put the entire euro zone at risk of collapsing. It would be a disastrous message to send to financial markets. Why should the Europeans save Spain or Italy if they can't even bail out a dwarf like Cyprus?

The German government is in an awkward position. It is forced by overriding considerations to make decisions that it can't really justify. There are considerable political risks. "A rescue package for Cyprus could be very incendiary," one member of her government admitted. Merkel is in danger of discrediting her entire euro policy by agreeing to bail out Cyprus.

The Europeans won't be able to plead ignorance, either. The BND has analyzed the situation in Cyprus and then debated it with experts from the "troika," made up of the European Commission, International Monetary Fund and European Central Bank (ECB).

The BND officers didn't bring good news. Formally, the island nation sticks to all the rules on combating money laundering laid down by the EU and other international agreements, the agency said. The country had passed the necessary laws and set up the required organizations. But there were problems when it came to implementing those rules, it added. They weren't being applied properly. The Cypriots, the BND said, sign everything, pledge a lot, but keep few of those promises.

Money laundering is facilitated by generous provisions for rich Russians to gain Cypriot citizenship, according to the BND which found that some 80 oligarchs have gained access to the entire EU in this way.

In 2011 alone, some $80 billion flowed out of Russia and much of that money had been channelled though Cyprus, according to the BND. Russians have deposited $26 billion in Cypriot banks, says the BND. That is well above the annual GDP of Cyprus.

The figures show the scale of the problem. The Cypriot government is banking on the Europeans being unable to refuse aid. When the euro finance ministers voiced criticism, their Cypriot counterpart reacted furiously, saying his country would solve its problems without the Europeans if necessary and threatening to leave the single currency.

The BND regards that as an empty threat, though. If Cyprus leaves the euro zone, its business model will no longer be as attractive, it says.

But the BND's conclusions also mean that if Cyprus gets an EU bailout so that it can keep the euro, the money of German and other European taxpayers will be protecting illegal Russian money.

Cyprus has been a tax haven since the 1970s. At first, it kept taxes low to attract shipping companies that registered their ships in Limassol. But the big boom didn't come until after the collapse of the Soviet Union.

The billions made out of that then needed a safe haven and found it in Cyprus. The Russian oligarchs, businesspeople and Mafiosi channelled funds to Cypriot companies to keep tax costs down and to be able to re-invest at least part of it in Russia at a later date.

Cyprus became a member of the EU in 2004 and joined the euro zone three and a half years later. And suddenly it was in more demand than ever. The number of firms registered has doubled since it acceded to the EU. The country had to tighten up its regulations on money laundering before it was accepted into the EU but in practice it only stopped the most flagrant abuses.

Since then, the Cypriot economic model has been highly attractive. The country is a tax haven within the EU, but has been given a clean bill of health by the OECD because it supposedly does enough to stop money laundering.

However, a paper by the European Parliament about organized crime in Russia mentions Cyprus in a number of places. And a World Bank report on 150 international corruption cases cites several companies and accounts in Cyprus.

Mistakes Made With Greece Being Repeated

The European Commission, the EU's executive body, is more lenient with the new member, though. German government officials complain that the Commission has never seriously urged Cyprus to take tougher action to fight money laundering and close tax loopholes.

In the case of Cyprus, many of the mistakes made by Greece are now being repeated. Greece was allowed to join the euro despite blatant misaccounting. And Cyprus was allowed in even though it isn't implementing EU standards for a clean financial center.

And now the EU has to help this of all countries. Compared with the other European rescue packages the planned €10 billion aid for the banks of Cyprus is miniscule in financial terms. But it's a political minefield. The share of the aid to be paid by German taxpayers amounts to €2 billion. This poses a new challenge for Merkel.

She is already having trouble justifying continuous aid payments to Greece because Athens has proven itself to be an unreliable partner that keeps coming up with new excuses for its omissions. Now she has to explain payments to a country whose success rests on illegal money.

Cyprus a Political Problem for Merkel

In addition, the beneficiaries of the help won't be ordinary workers or farmers but a caste of nouveau-riche immigrants that shamelessly boast their wealth while making virtually no contribution to solving the country's problems. Companies registered in Cyprus pay just 10 percent in taxes.

Germany's opposition Social Democrats, which have voted in favor of previous bailouts in the crisis, are determined to challenge Merkel this time and to attach conditions to their approval of support for Cyprus.

"Before the SPD can approve loan assistance for Cyprus, the country's business model must be addressed," SPD budget expert Carsten Schneider said. "We can't use German taxpayers' money to guarantee deposits of illegal Russian money in Cypriot banks."

The low rate of corporate tax and the silent approval of money laundering were unacceptable to Social Democrats, he added.

As one Merkel confidant put it: "Cyprus isn't an economic problem, it's long since become a political one." 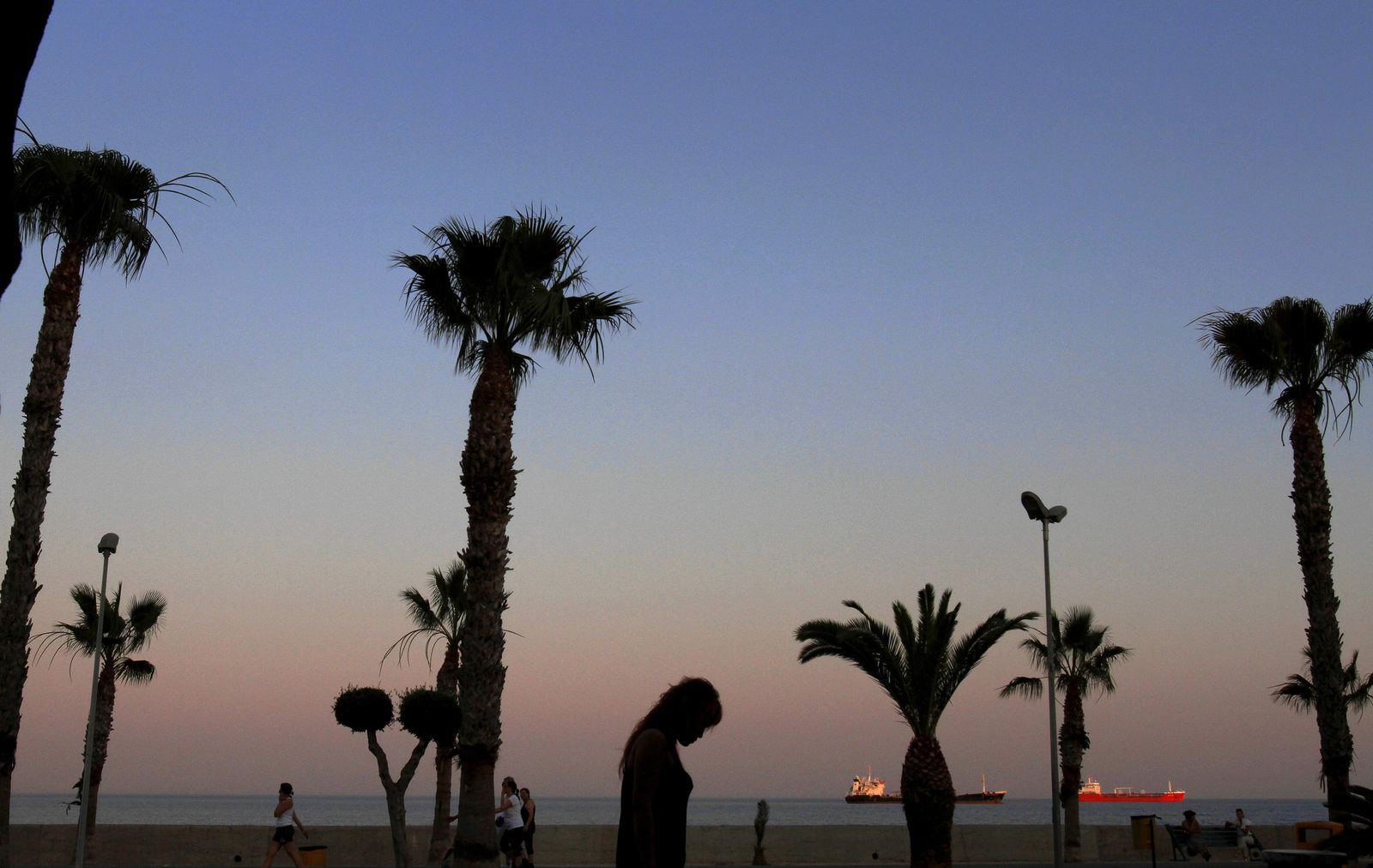 Palm trees in Limassol, Cyprus, seen as a haven for rich Russians.