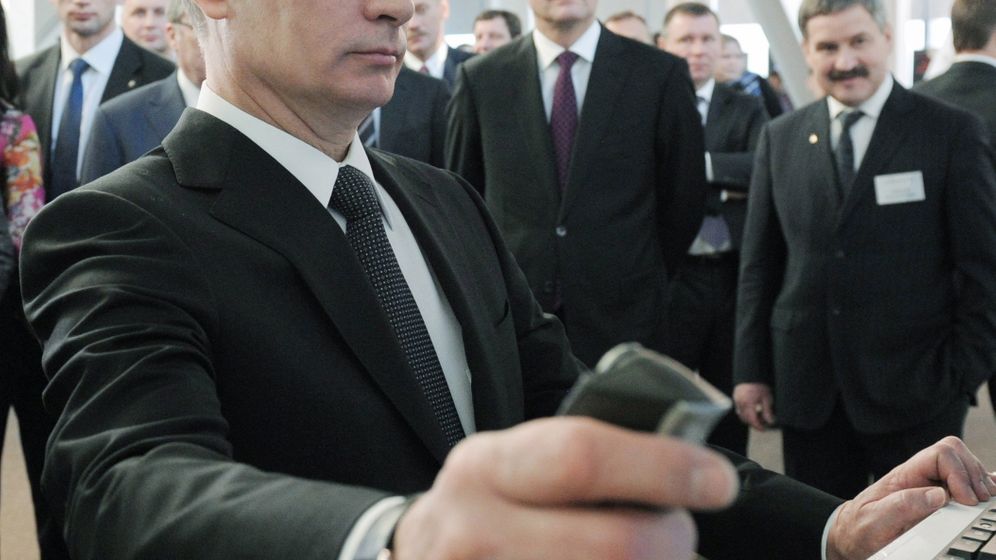 The Hotel Ukraine in Moscow is still graced with the emblem of the former Soviet Union, which features wreaths of grain encircling the Soviet star. The upscale Italian restaurant on the 29th floor offers a sweeping view past the symbols of the former communist empire to those of the modern age, the gleaming skyscrapers on the opposite bank of the Moskva River.

Down below is an armada of black, luxury sedans, looking as small as toy cars, interspersed with the occasional red Ferrari or yellow Lamborghini. The restaurant serves spaghetti with crab from the Kamchatka Peninsula for €50 ($64), and bottles of Château Pétrus for about €10,000. Business executives in tailored suits go there to celebrate their latest deals. They often raise a glass to President Vladimir Putin, who they see as the guarantor of Russia's stability.

Putin sees himself the same way. Next weekend, he and German Chancellor Angela Merkel will jointly open the Hannover Messe 2013, which showcases Russia this year. At the trade fair, Putin will present an impressive record to the representatives of German industry.

The economy of the world's largest country in terms of land mass grew by 3.4 percent last year. Unemployment is at 6 percent nationwide, significantly lower than in Western countries, and the government had a balanced budget last year, following a surplus in 2011.

Today's Russia no longer has anything in common with the scarcity and lack of services that characterized the economy of the final Soviet years. For instance, Russia is about to replace Germany as Europe's largest automobile market. And even in small Siberian cities, supermarkets are well stocked and open around the clock.

Still, Putin's impressive economic figures veil fundamental problems with the economic system he created: rampant corruption, conglomerates run by oligarchs and mounting government intervention in the economy. These have rendered Russia's economy less dynamic than those of the other members of the association of emerging national economies known as BRICS (Brazil, Russia, India, China and South Africa). More than anything, Russia lacks the political will to address these problems.

Western economies appreciate political stability, but that doesn't mean Putin won't be met with skepticism in Hanover. Relations between Germany and Russia are already strained, and the crisis in Cyprus has only made things worse.

All of last week, Russians were upset because they thought that Europe -- and Germany, in particular -- had ignored their efforts to rescue Cyprus. From their perspective, the European Union was "intentionally destroying the Cypriot banking system" and, indeed, expropriating an entire people. The newspapers likened the Cyprus bailout to theft, "Bolshevism like in the Soviet era" and a political punishment of Russia, which, as is widely known, has significant interests on the island.

For years, the Kremlin has used Cyprus as a financial base for Russian companies. Apparently it wasn't troubled by the tax evasion and money-laundering occurring at the same time. One Russian banking expert criticizes Moscow's inaction as being partly to blame for the current situation in Europe. There are currently "no relations at all anymore between Western Europe and Russia," says Sergei Alexashenko, the former deputy chief of Russia's central bank. He notes that the Cyprus crisis should serve as a warning to Moscow to finally change its ways.

What German companies expect more than anything is legal certainty and economic reforms. For them, the Russian market, which, unlike many others, continues to grow, is both promising and potentially treacherous. Indeed, whether a business venture succeeds or fails in Russia is still largely determined by politics.

Volkswagen, for example, is already producing VW and Skoda models in two Russian plants. VW CEO Martin Winterkorn negotiated directly with Putin about building additional plants. "There was a lot of back and forth and hemming and hawing over whether or not to do it," says Winterkorn. In the end, he decided that the company would build another engine factory in the western Kaluga region. But the decision was not entirely voluntary.

With a law known as Decree 166, the Russia government compels foreign companies to build their own production plants in the country. High import duties increase the cost of models coming in from abroad. But starting in 2016, any automaker that produces at least 300,000 vehicles in Russia will be allowed to import additional cars at lower import duty rates.

Pressure tactics like this are the Russian leadership's heavy-handed attempt to develop a new industrial base in the country. The relative lack of industry will be evident in Hanover, where the Russian booth is dominated by companies such as energy giant Gazprom and the Russian Railways (RZD). The state controls more than 50 percent of banks and 73 percent of the transportation industry. Likewise, the government's control of the oil industry has grown from 10 percent, at the beginning of the Putin era in 1999, to 45 percent today.

"We're concerned about monopolies and falling back into a state-run economy," says Michael Harms, director of the Moscow-based German-Russian Chamber of Commerce. Putin himself has been pushing to re-nationalize major corporations for years. The state-run oil giant Rosneft, run by Putin's confidant Igor Sechin, was given the green light to absorb TNK-BP, a private oil company, in a deal worth $60 billion. The merger, completed in late March, makes Rosneft the world's largest oil producer, placing it ahead of ExxonMobil.

"The country depends on exporting its natural resources and financing its imports with the revenues," says Rainer Hribar, chairman of VBH Holding, a public trading company based in Korntal-Münchingen, outside Stuttgart, that has been selling door and window hardware in Russia for the last 18 years.

The focus on state-controlled natural-resource companies is hindering the development of an economy of small and mid-sized businesses (SMEs). It also promotes Russia's dependence on oil and natural gas prices, which could soon decline, as the extraction method known as fracking increases the production of shale gas worldwide.

Indeed, the country threatens to become less competitive internationally. There is far too little investment and not enough innovative energy, and Russia's largely Soviet-era infrastructure is too dilapidated.

Russia is plagued by plane crashes, burst pipelines and power-plant accidents. Though a proud member of the G-8 group of nations, it is often more akin to a developing country. About a fifth of the country's drinking water is lost through leaks. Only about 500 kilometers (310 miles) of new roads are built each year. "At this rate, it will take us 1,000 years to develop a modern, comprehensive road network," the minister of regional development complained in November.

Prestige and flagship projects are now expected to improve the infrastructure. They include the 2014 Winter Olympics, the 2018 World Cup and a new port near St. Petersburg, although the details of who exactly owns the port are not entirely clear.

A Land on the Take

Cranes made by Liebherr, the German equipment manufacturer, jut into the sky at the container terminal in Ust-Luga on the Gulf of Finland. The port also includes an oil terminal and a loading station for coal. Last year, more than 160,000 cars were imported into Russia through the Ust-Luga port.

To date, the government has pumped more than €3 billion into the project. Investigative journalists with the magazine Nasha Versiya speculate that Valery Izraylit, the chairman of the Ust-Luga Company with a dubious reputation, and a former transport minister hold the majority of shares in Ust-Luga through two offshore companies. They also believe that the port facility is being developed with government funds, though Izraylit denies the accusations.

Ust-Luga seems to be one of the countless examples of the conflation of political power and economic benefits -- and an expression of an "essentially feudal system," as economist Vladislav Inozemtsev says. Characteristic of this malaise in the Russian economy is the elite's lack of confidence in the system it created. In 2012, wealthy Russians and Russian companies took more than $50 billion out of the country.

The 30 largest Russian companies, including state-owned businesses such as oil giant Rosneft, have a large share of their operations managed by offshore companies. The Renova conglomerate, owned by oligarch Viktor Vekselberg, which the Kremlin has engaged to build a Russian Silicon Valley on the outskirts of Moscow, saves taxes by maintaining companies registered in Switzerland, Panama and the Bahamas. Telecommunications giant Vimpelcom, owned by magnate Mikhail Fridman, is headquartered in the Netherlands.

In Russia itself, a backward bureaucracy impedes competition, as do cartels run by shady oligarchs or former members of the notorious KGB intelligence service. Russia ranks 112th out of 185 economies in the World Bank's Ease of Doing Business Index. In Moscow, it takes an average of 540 days to process a building permit application.

Ubiquitous corruption swallows up vast amounts of money. The National Anti-Corruption Committee estimates that bribes and nepotism account for $300 billion a year. In Putin's hometown of St. Petersburg, newly installed hot-water pipes were already leaking this winter. As it turned out, old, rusty pipes were installed instead of the brand-new pipes the city had been charged for.

On Transparency International's 2012 Corruption Perceptions Index, Russia is tied for 133rd place out of 176 countries, along with Iran, Honduras and the Comoros. The Russian edition of the magazine Esquire calculated that for €5.9 billion, the amount it cost to build a 48-kilometer road around Sochi, the host city of the 2014 Winter Olympics, the highway could easily have been paved with black caviar.

In November, the public prosecutor's office launched an investigation against former Agriculture Minister Yelena Skrynnik, who apparently feels more comfortable staying at her €11 million estate in France. She reportedly paid a large share of the purchase price in cash.

The Perils of Fighting Corruption

Hans-Jörg Grundmann recently became the anti-corruption officer of Siemens, the German electronics and engineering giant, after serving as head of its railroad division. He is familiar with the ways of doing business in Russia from his own experience. Western businesses often find it necessary to hire local consultants in Russia, but it is difficult to tell whether portions of their fees are also used for bribes. This is why Siemens carefully screens such consultants and requires them to fully document their activities even after they have been hired.

So-called expediting payments are strictly forbidden at Siemens. But Russian officials sometimes ask for a small contribution to speed up the passage of urgently needed goods through customs. When they suspect that such payments are being made, Siemens employees are supposed to call a special hotline set up at the company for this purpose. The hotline employees then try to help the employee in question resolve the problem. "You just have to be firm and stand your ground," says Grundmann, "and such requests will decline."

Not everyone is as confident. A few years back, when Porsche wanted to set up a dealership in Moscow, the Stuttgart-based automaker was first offered a piece of land away from the downtown area. Porsche executives were advised to contact the wife of a certain politician if they wished to be offered a better location. The woman had desirable properties at her disposal, but she demanded a share of the dealership in return. Porsche declined and built elsewhere.

Before the dealership could be opened, the fire department appeared at the site on a daily basis, allegedly in response to fire alarms. The building had to be cleared each time. Although the fire experts found neither smoke nor fire, valuable time was lost. The problem was cleared up after Porsche donated a red Cayenne SUV to the fire department. Miraculously enough, there hasn't been a false alarm ever since.