Germany doesn't exactly share the same reputation as its southern European neighbors for being warm and friendly. But non-European Union job seekers rated it above six other European countries in an immigration and integration survey released by the Migration Policy Group in Brussels on Wednesday.

Only a third of the foreigners surveyed in Germany's capital Berlin had trouble finding a job, while less than half did in Stuttgart, in the economically powerful southwestern state of Baden-Württemberg. This was in stark contrast with 79 percent of respondents in both Lisbon, Portugal and Milan, Italy who reported problems finding work.

"Immigrants reported the fewest problems finding employment in Berlin and Stuttgart and most often felt that their jobs matched their skills and training, compared to thirteen other European cities," study co-author Thomas Huddleston told SPIEGEL ONLINE in an email.

Just 18 percent of respondents in Berlin and 13 percent in Stuttgart said that they were overqualified for their jobs, compared with 66 percent in Naples, 52 percent in Milan and 29 percent in Madrid, Spain.

The non-profit Migration Policy Group spoke with nearly 7,500 immigrants born outside of the EU in 15 European cities about their job hunting experiences. They found that discrimination, black market labor that leads to job insecurity, and language barriers were lower in Germany than other nations. Though German is typically considered a difficult language to learn, only 25 percent of those surveyed in Stuttgart said language barriers were their biggest problems, while in Naples that number climbed to about half. In Faro, Portugal, some 63 percent of those surveyed reported difficulties with language.

But in Berlin, which has a steadily growing international community, the language barrier was not even among the top three listed problems. Respondents cited government sponsored language classes and integration courses as helpful tools for smoothing their integration.

But the Migration Policy Group's survey results differ from other reports that reveal some immigrants are having trouble adapting to Germany, especially those from southern and eastern Europe flocking to the country's strong labor market. The results may also have a lot to do with the fact that the German economy is booming compared to many of its EU neighbors.

"That immigrants have an easier time in Germany than in Spain or Portugal has much to do with the general economic situation," says Stephan Sievert, at Berlin's Institute for Population and Development. Young people, the ones most likely to move, are especially hard hit in euro-crisis affected countries, and comparably prosperous Germany is an attractive destination. Still, says Sievert, employment rates for immigrants are lower than for those born in Germany.

But demographic developments mean the country has no choice but to continue improving its immigration policies, according to The Expert Council of German Foundations on Integration and Migration (SVR). With its rapidly aging population and outflow of skilled German workers, the country needs immigrants to help bridge the gap, the organization says. Since the mid 1990s more than half a million Germans have left the country. The working age population in Germany is also expected to shrink by an estimated 5 million people by 2025.

Germany's efforts to improve immigration policies have so far received a mixed reception, however. More than half of the German communities surveyed by a study released Tuesday by the country's migration and integration commissioner said that they were working on initiatives including language courses and continuing education classes to help integrate immigrants into the labor market. But the SVR's 2012 evaluation, also released Tuesday, criticizes the lack of coordination between national, regional and local integration efforts.

In April the German parliament, the Bundestag, approved a bill to implement an "EU Blue Card" directive designed to ease work requirements so that skilled non-EU workers could stay long term, more than three years after the EU approved the concept. Even though some countries have yet to put the directive in place, the timing is "embarrassing," says Sievert from the Institute for Population and Development. "The German government should have done that a year ago." 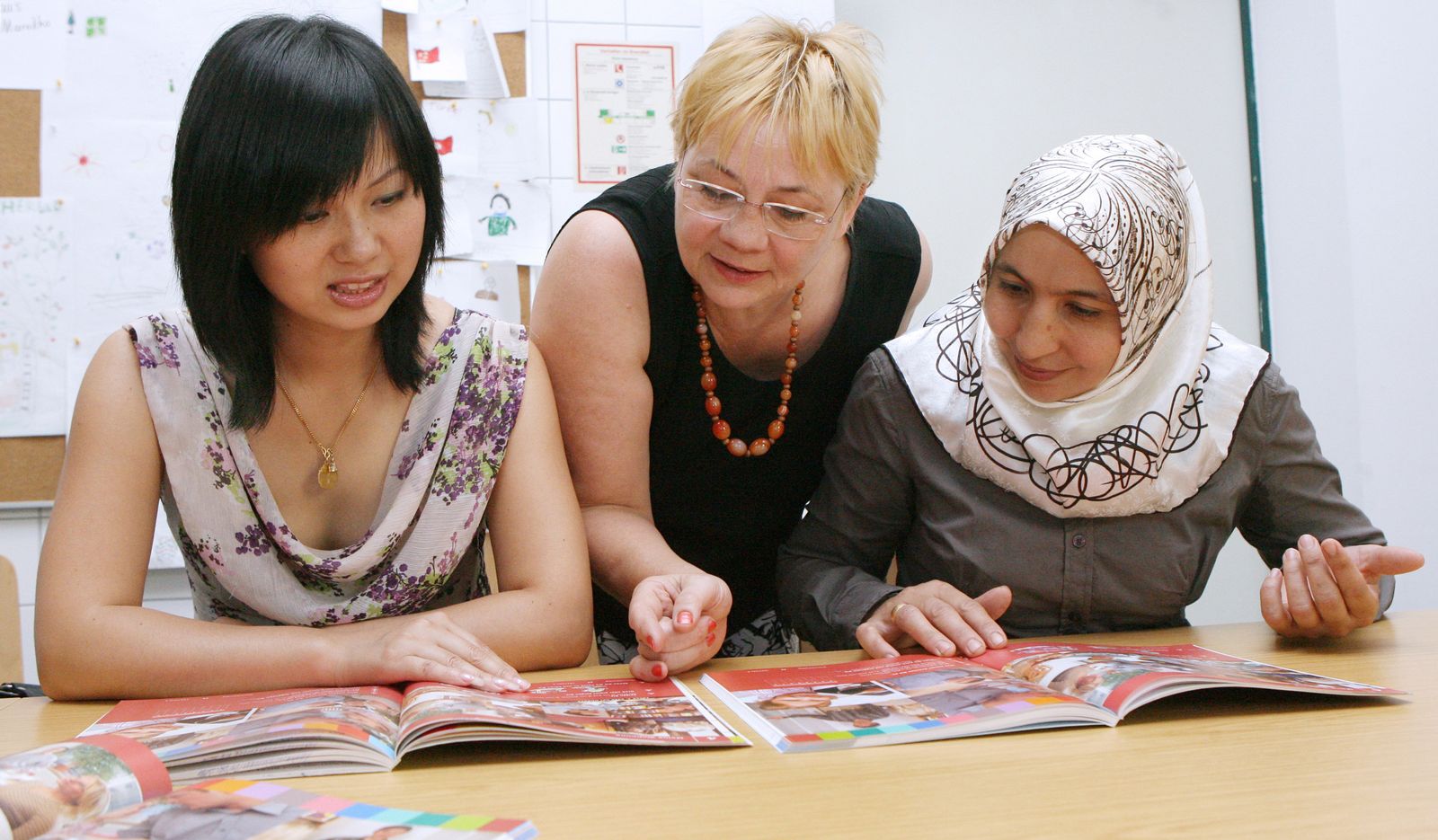 Foreign students take part in a German language course in Berlin, where survey respondents reported that such offerings eased their integration.