Together, the United States and the European Union account for nearly half of the world's economic output and 30 percent of global trade. They have directly invested more than €2.8 trillion ($3.7 trillion) on both sides of the Atlantic; and each day goods and services worth €2 billion are traded across the ocean.

US President Barack Obama and German Chancellor Angela Merkel both believe this figure could be increased significantly, adding some much needed economic stimulus in America and Europe.

"An EU-US free-trade agreement would create a new drive for the economy, investments and jobs -- on both sides of the Atlantic," German Economics Minister Philipp Rösler told the German daily Handelsblatt.

In Brussels, European Commission President Jose Manuel Barroso has described the potential deal as "ground-breaking ... a game-changer" -- and it is one that wouldn't cost a cent.

Together, the US and EU want to boost their economies, jobs and present a united front against the growing economic strength of emerging superpower China.

There are many hurdles confronting this "economic NATO," particularly when it comes to food and agriculture -- with European concerns over chlorine-rinsed chicken, hormone-treated beef and genetically modified crops, and American concerns over strict European regulations. But Europe and the United States have agreed to enter into negotiations aimed at eliminating barriers on the flow of goods and services and creating the world's largest free-trade zone.

Talks are expected to begin on the margins of the next G-8 summit in Britain on June 18, German newspapers are reporting on Thursday. Initially, Washington had expressed a lack of interest over a possible deal, but Germany's Merkel has gently nudged two successive administrations since 2007 and it is believed that a personal telephone call prior to Obama's State of the Union address helped remove remaining concerns. Conservative British Prime Minister David Cameron has also pushed for a deal.

The trade agreement aims to go far beyond just trade and services, and negotiations will also strive for common regulations and standards on issues like product safety and intellectual property. A widely cited example are differing automobile safety standards that require a company like Audi to produce different versions of its cars for the American market.

On Thursday, editorialists at leading German newspapers praise the effort, with one financial daily even describing a "United States of the West."

"The project is extremely ambitious, with some Atlanticists already speaking of an 'economic NATO'. That term isn't totally out of place either. The NATO military alliance was once established to protect against the threat of the Soviet Union. The idea of a new economic alliance also has found so many supporters because the old industrialized nations fear that they are falling behind the emerging economic power of China. The fact that negotiations are even taking place is a success for German Chancellor Merkel, who has been pushing the project for years despite an initial lack of interest in Washington. Obama's economics team also held off for a long time because his advisors felt the initiative would be too complex."

"The fact is, an economic NATO would be a major venture. The EU and the US are already tightly interwoven economically. … Despite this, 1.5 percent annual economic growth could be created if the remaining barriers were removed. The only problem is that eliminating these barriers would trigger protests of myriad interest groups and also require considerable political capital. It could also test European solidarity. In London and Berlin, the political classes tend to be oriented towards the free market, whereas protectionism often lurks in Paris."

"Resistance is already forming. In the future will we (Europeans) be forced to eat chlorine-rinsed American chicken? Will we have to sow the seeds of genetically-modified corn on our fields and accept America's lax data privacy provisions? Or, from the American perspective: Will we have to tolerate the Europeans' obsession with regulations?"

"Regardless what the outcome of the talks is, the fact that they are even taking place is extremely advantageous for the Europeans. The EU is now getting a future-oriented project that will allow it to look away from its own problems as well. A free-trade agreement would further open the Continent and could also foster trust between the Americans and Europeans and set standards for the rest of the world. It's worth using all of our energy to promote an economic NATO."

"Finally, one wants to call out, the US and EU are willing to turn an idea that has been bandied about in the political realm for some time now into a real project -- and negotiations are expected to begin soon for a 'Transatlantic Trade and Investment Partnership'. So President Obama isn't just answering the call of Asia -- he's also making the expansion of American-European economic ties a pet issue. Expectations for the mutual advantages of a free-trade agreement -- economically, politically and strategically -- are so great that one must ask why this wasn't already tackled sooner? But the rise of emerging economies and the challenges that presents wasn't a dominant issue until recently. Today, however, a response is needed, and every potential driving force for prosperity and the strengthening of the Atlantic community needs to be used."

"It appears that the differences on both sides of the Atlantic are now seen as surmountable. And that's very good news, because a free-trade agreement between the two economic zones would be the cheapest stimulus package one could conceive of. The European Commission expects that the reduction of trade barriers and the harmonization of standards and regulations would lead to annual GDP growth of 0.5 percent. Other estimates are even higher."

"But a common market would also send a powerful political message: Namely that the West wants to pull more tightly together to face the challenges coming from emerging powers in other parts of the world. Given America's current weakness in leadership, it is also necessary. Otherwise, Obama's speech had a clearly isolationist character. …. Only when the country's economic foundations are healthy again can (America) assume a global leadership role (Obama suggested)."

"This means that the trans-Atlantic free-trade zone at the same time has both economic and political significance. It is aimed at helping Europe and the United States recover economically. But it also makes clear that only an en ever-closer West can succeed in decisively helping to determine global policy. Given these considerations of overriding importance, the free-trade zone cannot be allowed to fail over niggling details." 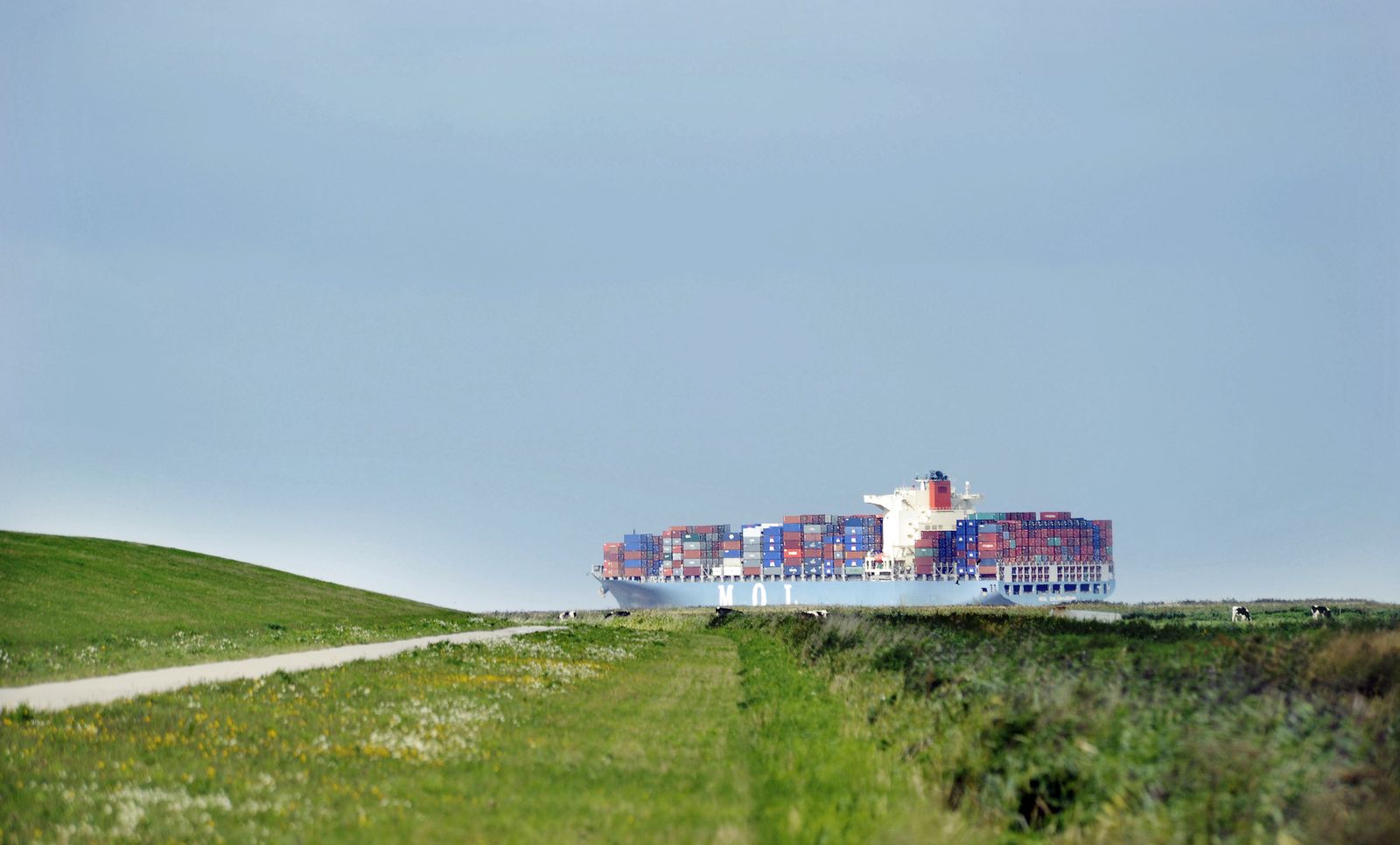 Greener pastures from US-EU trade? A container ship enters the North Sea from the Elbe River in Germany.