After the first round of voting in parliamentary elections on Sunday, Socialist president François Hollande moved closer to securing his grip on power. French pollsters predicted that the Socialist Party and its Green allies will win at least 295 of the lower house's 577 seats, giving them a majority in the French National Assembly.

Because only a handful of candidates passed the 50 percent hurdle they needed to win the election outright, there will be a runoff election this Sunday to determine the final winners. Only candidates that got more than 12.5 percent of the initial vote will be in the runoff. While the Socialists haven't declared victory yet, early results show that Hollande won't need the support of the radical Left Front to govern the country.

The center-right UMP party and its allies look poised to win as many as 263 seats, which would make it the leading opposition party. Marine Le Pen's far-right National Front, which has lobbied for getting rid of the euro, took third place in the first round of voting. But due to the runoff system, they will probably only secure a handful of National Assembly seats.

German newspapers warned on Tuesday that Hollande should not get overconfident as he settles into power, pointing out that turnout in Sunday's election was woefully low at only 57 percent. And though Hollande has already made some unilateral moves like rolling back the retirement age, he will have plenty of struggles ahead as Europe looks for a way out of its current euro zone troubles.

"After the first round of voting, the French Socialists find themselves in a comfortable position. They could reach an absolute majority in the runoff elections. That would give the Socialists an absolute majority in both houses of parliament for the first time and allow President François Hollande to do something that Angela Merkel can only dream of doing: govern by decree."

"Whether or not the Socialists' achieve victory will only become clear next Sunday evening. Even if they reach an absolute majority, it will come with a blemish: Non-voters, at a record 40 percent, are the biggest political group. It is a sign that Hollande's victory has not induced countrywide euphoria."

"Merkel faces the threat of losing her ally (former President Nicolas Sarkozy) in the opposition. The UMP lost around 10 percentage points compared with the 2007 parliamentary election. One reason is the rise of Marine Le Pen with her extreme euroskepticism. The conservatives can no longer ignore the National Front."

"In the runoff, conservative candidates who appear to be open to the ideas of ring-wing extremists are considered to have better chances. In the long run, it could mean that euroskeptics will prevail in the conservative camp and Germany's conservative Christian Democratic Union will lose its Gaullist counterpart in the UMP. Angela Merkel could, in the future, face strong winds blowing from both the right and the left."

"The clear outcome is good not only for Hollande, but also for Germany and all of Europe. The EU needs a president in Paris who is strong domestically so that he can act in foreign policy in order to get through the tough times ahead. Above all, Europe needs a man in the Élysée Palace who is not oriented towards a leftist utopia but rather reality. Hollande is just such a man. Now he is getting a stable parliamentary basis for his pragmatic center-left policies. He is not dependent on the support of the radical left. French voters have displayed sound judgment."

"At the same time, the Socialists have no reason to be overconfident. Participation in this election was weaker than ever before. It shows that Hollande's election at the beginning of May did not set off a wave of enthusiasm. …. These days, crisis-inspired sobriety prevails. France is observing Hollande's first steps with a benevolent skepticism instead of euphoria. For Hollande, this can only be an advantage. He does not have to work miracles. Citizens will be happy if he can just properly overcome everyday difficulties."

"The far-right National Front could win three seats in parliament. For the party head, Marine Le Pen, that is already giving her reason for an early declaration of victory. But the extreme right's results have already sharply declined in comparison to the presidential elections. The center-right has valiantly defended its position, even though it has been without a leadership since Nicolas Sarkozy's defeat. Hollande only narrowly beat Sarkozy. The Socialists and their allies are just as narrowly leading the UMP. Hollande should take this as a warning not to underestimate the opposition." 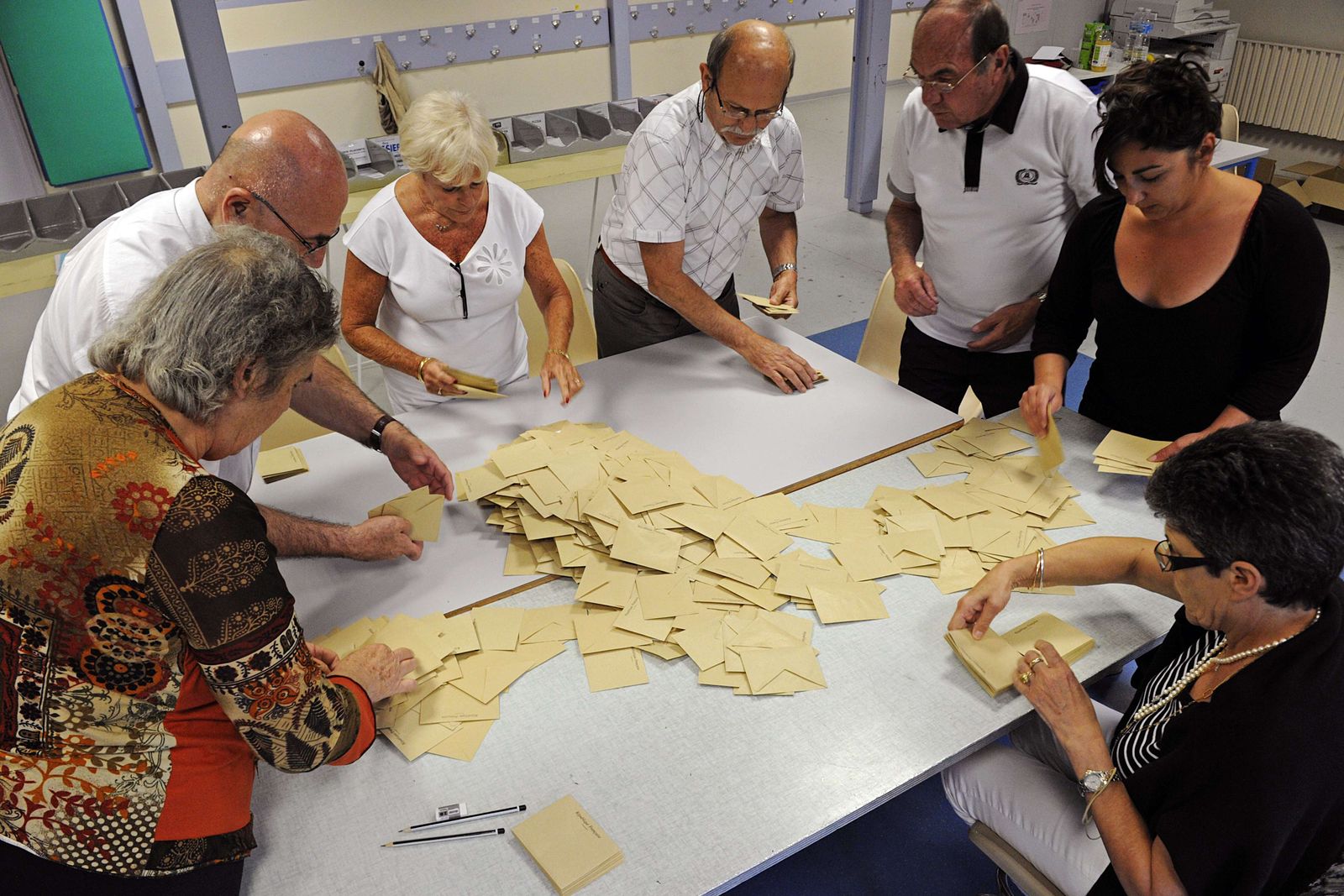 Volunteers count votes at a polling station in Marseille in southern France. While a runoff is necessary, first round results show that the Socialist Party and its allies are set to win 40 percent of the votes for the French National Assembly.