It's been a rough few years and a particularly long and stressful day for Angela Merkel. But, for now at least, Germany's chancellor can breathe a sigh of relief.

In the first vote, members of the Bundestag, Germany's federal parliament, approved the fiscal pact, which commits countries to stricter budgetary rules, such as reducing their structural deficits to 0.5 percent of gross domestic product. Lawmakers voted 491-111, with six abstentions, in favor of the pact, a pet project of Merkel's that was agreed on by 25 of the EU's 27 member states at a summit in January. Ireland became the first of these countries to ratify the pact in early June. A two-thirds majority, or 414 votes, was needed for the measure's passage because it involves an internationally binding commitment to limit Germany's deficit.

In the second ballot, lawmakers voted 493-106, with five abstentions, in favor of the European Stability Mechanism (ESM), the €700 billion ($890 billion) permanent bailout fund.

The Bundesrat, the legislative chamber which represents the interests of Germany's states, also approved both measures later in the evening. Fifteen of the country's 16 states voted in favor. Only the eastern state of Brandenburg, which is governed by a coalition of the center-left Social Democrats and the left-wing Left Party, did not support the measures.

A Day of Discord

The votes were held despite calls earlier in the day from politicians both inside and outside Merkel's center-right government to delay them until lawmakers had time to consider what effects the deal concluded at the Brussels summit would have on the ESM.

Less than 24 hours earlier, Merkel had made some tough and unexpected concessions after a marathon 15 hours of talks at an EU summit in Brussels lasting well into Friday morning. The euro zone's 17 member countries agreed to ease the conditions for receiving aid from the ESM bailout fund. According to the agreements, euro-zone members states that fulfill the budgetary rules laid down by the European Commission can now receive aid without agreeing to additional tough austerity measures. Strict oversight by the troika -- composed of the European Commission, the European Central Bank and the International Monetary Fund (IMF) -- will no longer apply.

What's more, the bailout fund will be allowed to pump money directly into struggling European banks rather than pushing countries deeper into debt by loaning the money to governments themselves in exchange for austerity commitments. However, this can only happen after a single European banking supervision mechanism -- under the auspices of the ECB -- has been established, which could take some time.

Prior to the summit, Merkel had vocally opposed both steps, preferring to stick to the rules that had already been hammered out and that guaranteed strict oversight, particularly by the IMF.

As a result, Merkel was sharply criticized Friday for her concessions, with many commentators accusing her of having caved in to demands of southern European countries, particularly Spain and Italy. For example, the mass-circulation tabloid Bild ran a headline Friday saying "Merkel Buckles," and Carsten Schneider, a budgetary expert with the center-left Social Democratic Party (SPD), wrote on Twitter that Merkel's government had made "a 180-degree turnaround." Likewise, Frank Schäffler, a member of the business-friendly Free Democratic Party (FDP), the junior partner in Merkel's coalition government, said: "The ink isn't even dry and the substance of the ESM treaty is already being changed." Nevertheless, others held that her actions constituted both a necessary and clever tactical maneuver.

Italian Prime Minister Mario Monti and Spanish Prime Minister Mariano Rajoy were able to secure the concessions by threatening to torpedo the €120 billion ($150 billion) European Union growth pact originally proposed by French President François Hollande, who had promised voters during his recent presidential campaign to secure a growth component to complement Merkel's fiscal pact. Even if experts doubt whether the growth pact will have much of an effect, Merkel had promised the successful passage of the pact to the opposition back home, as well as support for a financial transaction tax, in exchange for their support in ratifying the ESM and the fiscal pact in Friday's votes.

However, in a speech delivered to parliament directly before the vote, Merkel defended her concessions -- which parliament will vote on at a later date -- as a "sensible decision." She stressed that growth and employment were key for the future of the European Union, and that parliament's approval of the ESM and the fiscal pact would be "a signal for Europe" and would send "a signal of unity within and without."

Merkel's statement was followed by several hours of debate. SPD party boss Sigmar Gabriel, the first to speak, accused Merkel of having exacerbated the crisis and having been too hesitant about taking additional steps to regulate the financial markets. Although he called the recent decisions in Brussels "past due," he said his party finds them "correct."

Jürgen Trittin, one of two parliamentary floor leaders of the Green Party, also laid into the chancellor, saying Merkel had contributed to making every country in the euro zone into a "plaything of the financial markets" and had helped worsen the crisis of confidence through her hesitant actions.

Despite parliamentary approval of the ESM and the fiscal pact, it is expected that the treaties will not be immediately ratified, following a request by Germany's highest court to the country's president, Joachim Gauck, asking him not to sign them into law until it can complete a legal review.

At least 12,000 complaints are expected to be filed with the Federal Constitutional Court regarding the ESM and the fiscal pact. As a result of the legal complications, the ESM will not go into effect on July 1, as planned.

Opponents of the measures lost no time on Friday night in filing their constitutional complaints. The Left Party's parliamentary group faxed their complaint to the court immediately after the Bundestag vote on Friday evening. Bundestag member Peter Gauweiler of the conservative Christian Social Union even sent a courier around midnight to personally deliver his complaint to the court. 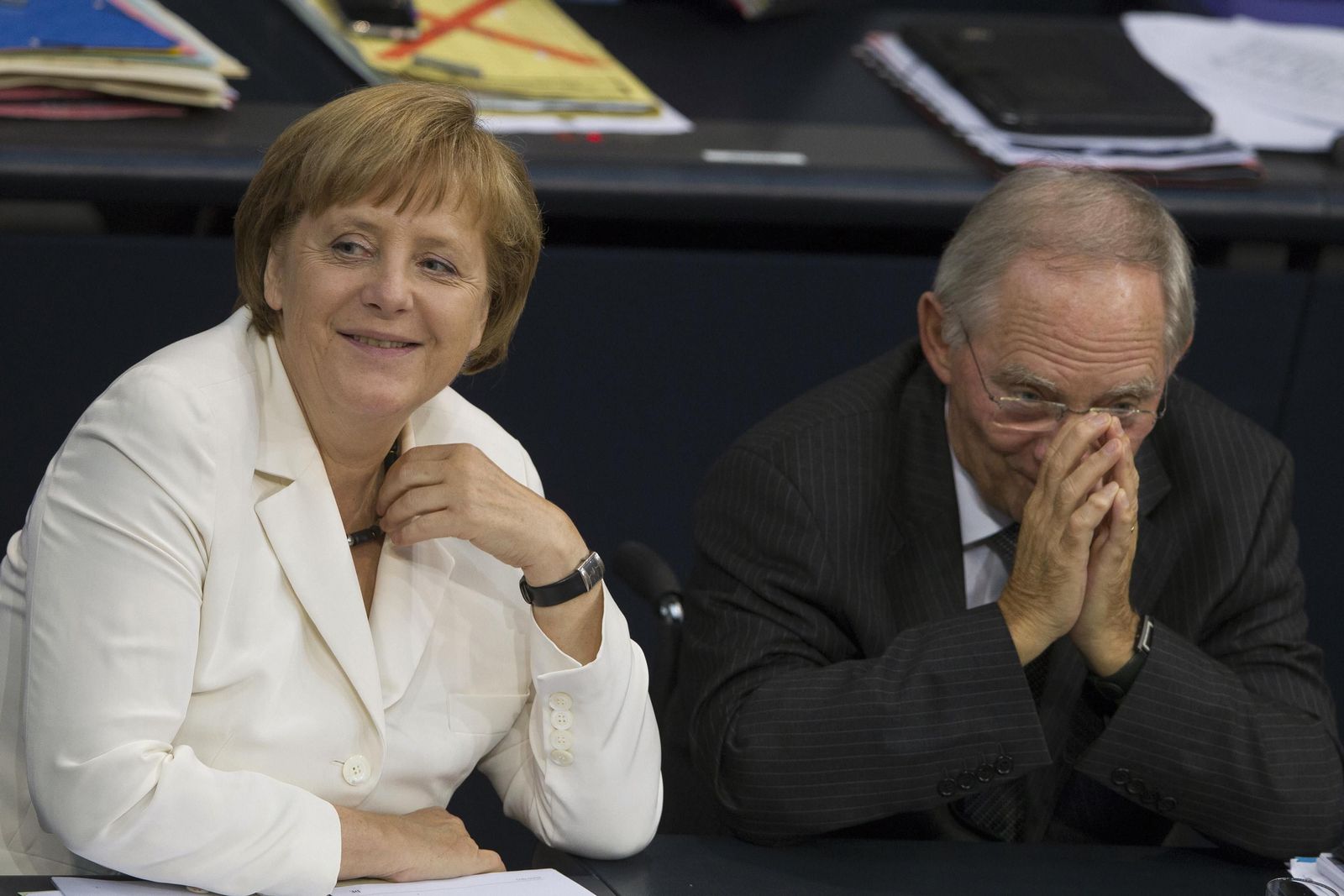