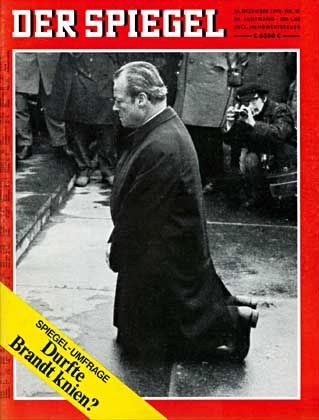 Then Chancellor Willy Brandt's kneeling in front of the Warsaw Ghetto memorial in December, 1970.

Today, the Poles see themselves exclusively as a people of victims and heroes: Divided up no less than three times between Russia, Prussia and Austria 200 years ago; defeated in the popular uprisings of 1848; reborn in 1918; attacked in 1939; and betrayed to Stalin in Yalta in 1945. For centuries, Poles have not been ruled by Poles, but by Prussians, Austrians, Russians, Nazis and Communists, according to this view, which also insists that, despite the odds, the Poles were the ones to herald the end of communism by founding the "Solidarity" (Solidarnosc) movement in 1980.

19th century poet Adam Mickiewicz described the Poles as "Christ among the people" -- a people that suffers like the Savior on the cross, for the sake of everyone's freedom. Traces of this Romantic self-adulation have now become constitutive of the mentality of many Poles. Given the credit we deserve for saving Europe from the Turks (outside Vienna in 1683) and bringing down communism (1989), should the European Union (EU) really be treating us like a run-of-the-mill medium-sized country? That is the question many Poles are asking themselves.

The Kaczynski twins channel this sentiment. They have promised to put an end to Poland's supposed gingerly treatment of its western neighbors. Most of all, however, they want to prevent Berlin from achieving a success in the negotiations over the EU constitution. They do not want to allow Poland to lose part of its new sovereignty in negotiations conducted on the initiative of Germany, of all countries.

Poland's borders through the centuries.

Could one not ask two peoples that have lived as neighbors for more than 1,000 years to trust one another more? Not in the case of Germans and Poles, it seems, unfortunately: Again and again, havoc was wrought on the country around the Vistula River by its neighbors.

The legend of chaste Princess Wanda already tells such a story. The daughter of the Duke of Cracow is said to have been so proud and beautiful that no day went by without some nobleman who adored her asking for her hand. But Wanda rejected them all.

Once, a German ruler, the Knight Rüdiger, came by, but she rejected him too. When the jealous warrior then declared war, Wanda rode into battle, struck Rüdiger down with her sword and then drowned herself in the Vistula in order to spare Poland further fighting.

From Old Prussians to the Teutonic Order

Does the legend, recorded by Polish chroniclers during the 12th or 13th century, reflect the popular sentiment of the time, namely Slavic fears of German settlers? Thousands of such settlers moved east, summoned by Polish rulers. Poland, which had disintegrated into small principalities at the time, was suffering the attacks of Pagan tribes: Duke Conrad I of Masovia was having an especially hard time with the Old Prussians. Not knowing what else to do, he hired an army of unemployed crusaders, the Teutonic Order.

But instead of converting the Old Prussians to Christianity, the knights turned their mission into a campaign of invasion and subjugation. Soon they controlled the entire Baltic Sea coast and large parts of the hinterland. It was only in 1410 that a Latvian and Polish army was able to win a decisive victory over the Teutonic order at Tannenberg (called Grunwald in Polish).

The counter-reformation responded to 16th century Protestantism, a movement that was attractive to many at the time, with resolve: Poland became a bastion of Roman Catholicism. While the Thirty Years War raged in Germany, Poland was largely spared the bloodshed between the hostile Christian camps.

Instead, military confrontations with Sweden, Russia and the Ottoman Empire weakened the country. In 1683, the Poles sent an army to Vienna and defeated the Turks.

Eighty-nine years later, the great powers of Europe -- Prussia, Russia and Austria -- began carving Poland up between themselves in three stages. In 1795, the country disappeared from the map entirely.

The rights of the Poles were in some cases drastically restricted under foreign rule. Insurrections broke out in 1830, 1848 and 1863. They were struck down by Prussia and Russia. At the same time, Catholicism became the decisive element of Polish identity. Only a Catholic can be a true patriot, on this view.

The divisions are probably the most important explanation for the exceptional patriotism of the Poles. While all modern European nations invent their own symbols during this era, the royal Polish throne and regalia were taken to Russia, never to be returned. Polish flags and coats of arms were banned, and singing patriotic songs became an act of high treason. The result, writes British historian and Poland expert Norman Davies, was a feeling of patriotism that exempted everything Polish from criticism.

This sentiment recedes slightly into the background only in 1918. With the final collapse of the monarchies in Russia, Austria-Hungary and Germany, Poland regains its place on the map. The rebirth of the republic is celebrated frenetically by the population. But Germany views the loss of German-speaking territories in Silesia, Pomerania and Western Prussia -- part of the Poland by the Treaty of Versailles -- as a great injustice.

Nazi Germany's attack on Poland on Sept. 1, 1939 inaugurates the darkest chapter in Polish-German history. Just six weeks later, the SS commander and chief of Hitler's Reich Security Main Office Reinhard Heydrich announced the "liquidation of the Polish leadership." Jews, Sinti and Roma were not the only victims; Polish politicians and intellectuals were also exterminated. The Nazis erected death camps such as Auschwitz, Majdanek and Treblinka on Polish territory.

The regime of occupation was brutal: Following the elimination of the Polish intelligentsia, the Germans shipped thousands of Poles to Germany as slave laborers. The SS and the Wehrmacht struck down the Warsaw Uprising in the Polish capital in 1944. It was the largest act of resistance against Nazi rule. More than 200,000 people died, and the city was razed to the ground house by house.

At the Yalta conference in Crimea in February of 1945, the Poles were only granted observer status. Poland had been destroyed, and the Red Army was stationed within the country, which Stalin wanted to turn into a Soviet satellite state. US President Franklin D. Roosevelt was prepared to recognize the provisional communist government and British resistance to the plan was weak. Poland fell into the Soviet sphere of influence.

At the Potsdam Conference, half of Poland's eastern territory was separated from the country and made part of the Soviet Union -- the very territories granted to the Soviets as part of the 1939 Hitler-Stalin pact. The new Poland was compensated by land in the west -- territory which had previously belonged to the Germans. More than 10 million Germans fled or were expelled. Poles from the country's former eastern territories were resettled and move into the homes of the expellees.

The Communist rulers stoked Polish nationalism, but mostly they fanned the flames of anti-German fear. Their message was that only Poland's alliance with the Soviet Union could prevent the return of the German "crusaders."

Still the first step towards reconciliation came from Poland. In 1956, Polish Catholic bishops sent a letter to their German colleagues. "We grant and request forgiveness," they wrote -- at a time when German expellees were still openly demanding that the Oder-Neisse Line -- the new border between Poland and East Germany -- be redrawn.

A German Chancellor Kneels in Warsaw

The Ostpolitik or Eastern European policy of German Chancellor Willy Brandt broke with the dogmas of the Cold War. When he knelt down in front of a monument commemorating Warsaw Ghetto Uprising in December 1970, it caused a scandal within the German right. But in Poland, the gesture was hushed up. The iconic image of the kneeling chancellor became known to the public only during the 1980s: The Communists had no use for the new face the peaceful Germans were presenting to the world.

When General Wojciech Jaruzelski violently suppressed Solidarnosc ("Solidarity"), the first freely constituted trade union in the Soviet bloc, the German government under Chancellor Helmut Schmidt responded mildly, arguing that Jaruzelski effectively prevented a bloody Soviet invasion. To this day, many former dissidents have not forgiven the German left for Schmidt's words. But at the same time, hundreds of thousands of Germans sent the hungry Poles food parcels.

Following the fall of the Berlin Wall in 1989, the German-Polish relations quickly improved. After some initial hesitancy on the part of Germany, German Chancellor Helmut Kohl and Poland's first non-communist Prime Minister Tadeusz Mazowiecki agreed to what was effectively a commitment to the Oder-Neisse Line, and signed a Polish-German border agreement.

Often, German expellees traveling from Germany to Poland as nostalgic tourists are the first to begin establishing personal contacts again. Hardly any of them want to return to their former homes. They just want to see whether the home they remember from their childhood is still standing. Even Herbert Hupka, a functionary of the Federation of Expellees long considered public enemy number one by Poland due to his radicalism, was eventually awarded the title of honorary citizen of his Silesian hometown of Ratibor, now called Racibórz. The architects of the post-communist era in Warsaw always knew that the road to Brussels, towards membership in the EU, led via Bonn or, later, Berlin.

During the period that followed, local politicians met one another, student exchanges flourished and Germans spoke out in favor of Polish EU membership. But these developments had no real effect on deeper trends: Men such as Warsaw's former ambassador to Germany, Janusz Reiter, warned against the "routine of reconciliation" and the "kitsch of reconciliation."