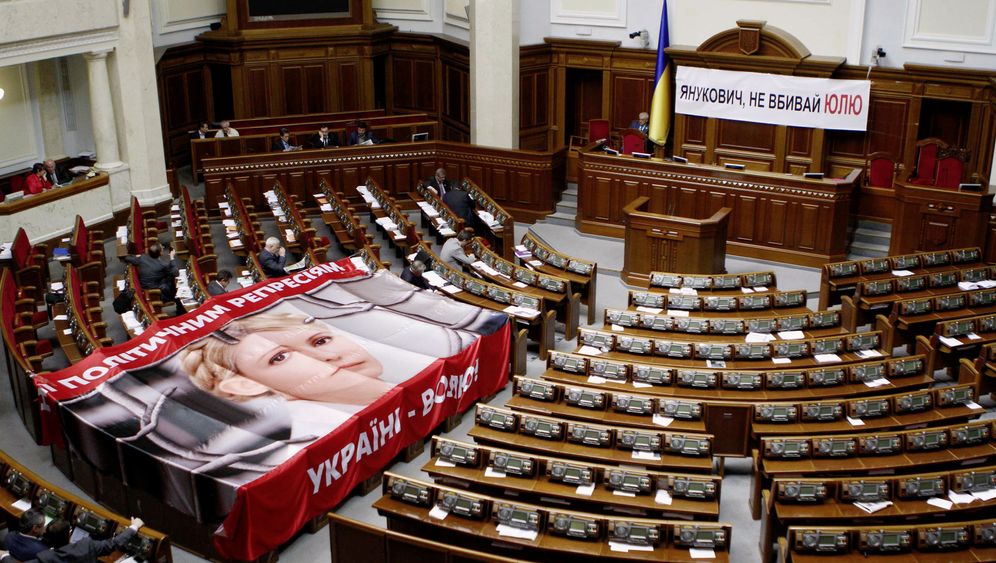 The Ukrainian government's last foreign-policy success took place one month ago in Seoul, South Korea, where world leaders were gathered to discuss nuclear safety. Ukrainian President Viktor Yanukovych, 61, who has been the subject of international criticism for months because of his restrictions on press freedom and the imprisonment of his political rival Yulia Tymoshenko, was allowed to give a talk on "creating a world-class research center at the Chernobyl nuclear power plant."

After the summit, Yanukovych's spin doctors proudly spread the word that the Ukrainian leader had met with US President Barack Obama for "discussions." What they failed to mention, however, was that the talks took place with both leaders on their feet and lasted about four minutes. Including the greeting and farewell.

From there, despite Ukraine's role as co-host of the upcoming European Football Championship, it has been all downhill. Indeed, with just over one month to go until the tournament kicks off, it looks as though Yanukovych, elected to the Ukraine presidency two years ago, will be a decidedly lonely host.

On Thursday, a spokesman for German President Joachim Gauck confirmed that Gauck had decided to cancel a planned trip to Ukraine in mid-May for a meeting of Central European heads of state. The German president took the decision in protest against the actions of Ukrainian authorities against the ex-prime minister and opposition leader Yulia Tymoshenko.

German Foreign Minister Guido Westerwelle welcomed Gauck's move. "I feel that the president has made the right decision," Westerwelle said on Thursday, adding that Tymoshenko's condition filled him with "great concern."

The Financial Times Deutschland also reported on Thursday that Chancellor Angela Merkel had told the Ukrainian government that she might not travel to the European Football Championship because of the Tymoshenko case. Officials from the German Chancellery met with representatives of the Ukrainian government in Berlin on Thursday to discuss the case, the newspaper reported. The Ukrainians were apparently informed that Merkel's trip to the championship was by no means guaranteed.

Tymoshenko is currently serving a seven-year sentence in a prison in Kharkiv. The northeastern Ukrainian city is also the venue for the June 13 soccer game between Germany and the Netherlands.

Last October, a Kiev court found Tymoshenko guilty of abuse of office in connection with a gas contract she negotiated with Russia. International observers consider the verdict to be politically motivated. In the 2010 presidential election, Tymoshenko came shortly behind Yanukovych. In 2004, she had been one of the leaders of the Orange Revolution that prevented then-President Leonid Kuchma from installing Yanukovych as his successor by means of electoral fraud.

The Tymoshenko case has put a strain on the relationship between the EU and the Ukrainian government. Brussels has put an association agreement with Kiev on ice. EU Enlargement Commissioner Stefan Fule has expressed his "extreme concern about the recent reports on the treatment of Tymoshenko," while the EU's foreign affairs chief, Catherine Ashton, said Thursday she was "deeply preoccupied" about the allegations that Tymoshenko had been assaulted by guards.

In comments to SPIEGEL ONLINE on Thursday, European Parliament President Martin Schulz said "the Ukrainian government must solve the problem as rapidly as possible.... The international pressure on Ukraine will increase and could easily endanger the association agreement with the EU."

Tymoshenko, 51, has been ill for months, having apparently suffered a slipped disc in prison, but is afraid she may be poisoned if she allows herself to be treated by Ukrainian prison doctors. German doctors from the Charité university hospital in Berlin recently examined Tymoshenko in Kharkiv and offered to treat her in Germany. Ukrainian authorities rejected that proposal, however. On Thursday, Foreign Minister Westerwelle repeated the offer to provide treatment for Tymoshenko in Germany.

Late last week, the politician went on a hunger strike. Tymoshenko's lawyer also claimed that his client had been beaten by prison guards. "I thought those were the last minutes of my life," declared the opposition leader, who is known for a certain theatrical tendency, on her website.

Yanukovych wanted to make Tymoshenko disappear from the political stage by getting the compliant judiciary to put her behind bars. Instead, she has become a shadow that follows him at every turn. After the verdict was announced last October, the EU withdrew its invitation to the Ukrainian president to a planned meeting. A defiant Yanukovych flew to Cuba instead of Brussels.

Gauck's cancellation, which was coordinated with the German Foreign Ministry, takes the conflict over Tymoshenko to a new level. Until now, European diplomats have limited themselves to rhetoric against Ukraine. Now, however, it seems plausible that European leaders may decide to avoid the football games in Ukraine, or at least give host Yanukovych the cold shoulder. On Thursday, the president ordered an investigation into the allegations that Tymoshenko had been mistreated in prison.

Yanukovych has also proved himself unlucky in domestic politics. In recent years, the economy has only grown by around 4 percent -- not enough to make up for the 15 percent slump during the 2009 economic crisis. In the fall, the country will elect a new parliament, and Yanukovych's Party of Regions looks at risk of losing its majority. Recent opinion polls show the party at just under 17 percent, 3 percentage points less than in March. An alliance led by Tymoshenko's Fatherland party is currently at about 20 percent.

Already, rumors of a possible political coup are making the rounds in Kiev. If Yanukovych continues to behave so haplessly and loses the upcoming elections, Ukraine's billionaire oligarchs could drop him. The wealthy businessmen, who control the Party of Regions, put Yanukovych in his current position as leader, but their patience is limited. The respected news portal Ukrainskaya Pravda has even been playing out possible scenarios, under the headline: "Ukraine without Yanukovych."